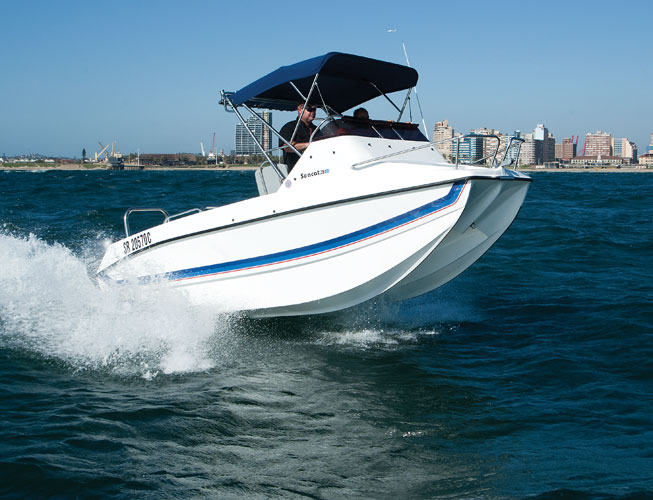 SECOND time lucky, perhaps, I thought on the morning I was due to test the Seacat 520. The first time I took her out for a trial run we ran into some unforeseen circumstances (unrelated to the craft) and had to call off the test.

So there I was, back to try again, and hopefully this time things would work out for Shaun Lavery, of Yamaha, and I. As usual, I met up with Shaun and Seacat designer/builder Grant Reed at Durban Ski-Boat Club to put this little beauty through her paces. It felt strange that Ryan Hansen from Durban Yamaha wasn’t there this time, as whenever I test a boat for Yamaha he is always available to lend a hand. He’s one of the few dealers that helps without question. He sure does Yamaha proud!

FIRST IMPRESSION
Having tested the 520 Centre Console version at the end of last year, this was a reacquaintance of sorts, but this time with a forward console.
She is a typical ski-boat that I would recommend for experienced fisherman and entry-level angler alike, marlin angling aside, a craft that can be towed around with ease for light tackle fishing in the bay, estuary and offshore, as well as for freshwater operation.

My opinion is that she is neatly put together for both the serious angler and the occasional fisherman. She is small enough for only one person to handle, but ideal when at least two people venture out to sea aboard her. 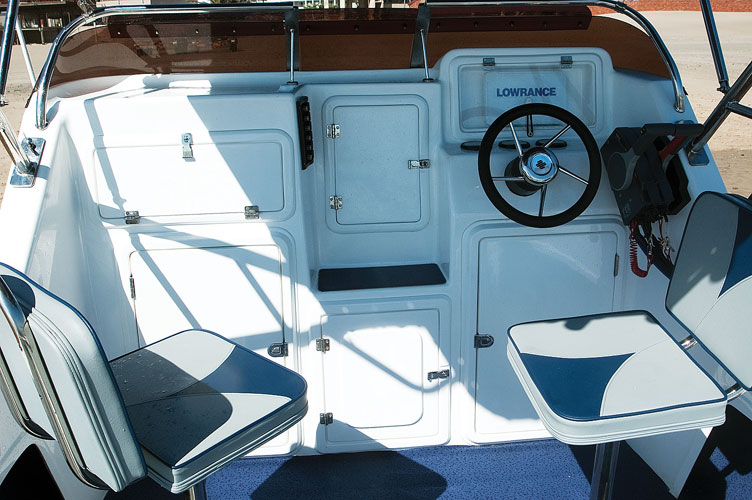 CONDITIONS
The sea conditions were rough on the test day. The northeaster was pumping, turning the sea into a washing machine out there, which made the photographic shoot very difficult. However, testing a boat in those conditions is the ultimate trial of a craft’s capabilities. If she can beat those conditions, then she’s good for everything the sea can throw at her.

LAUNCHING AND TRAILERING
When it comes to beach launching, size does matter. It is just much easier to put a 16ft boat in the water than it is to launch a 22ft craft from the beach.

Launching the 520 Seacat was a cinch. Because of her size she could be turned around by hand much easier than a bigger boat.

After the test we ran her up the beach and pulled her up and onto the trailer with ease. Loading her is faster too, even with a winch which didn’t feel the Seacat 520 as opposed to the bigger 636 tested on the same day. She slid onto her standard custom-built galvanised single axle breakneck trailer without a creak from the cable. 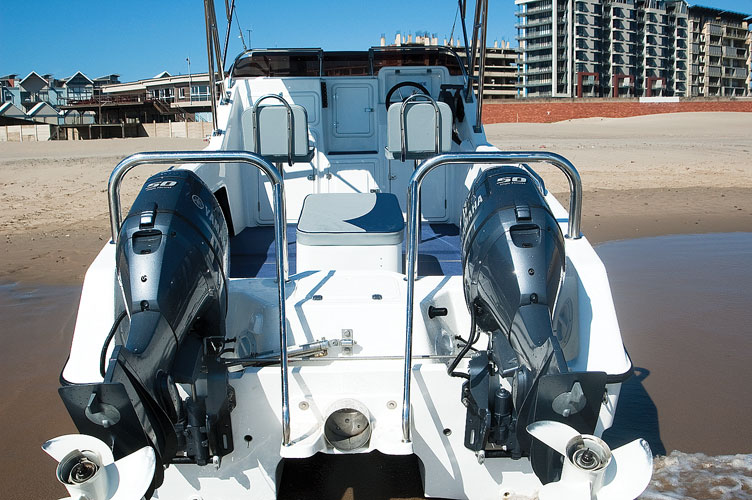 MOTORS, CONTROLS AND PERFORMANCE
This Seacat 520 was fitted with 2x50hp 4-stroke Yamaha engines with cable sidemount controls. Even though the controls were cable, she still went into and out of gear easily.

Should you ever experience difficulty with getting cable controls into and out of gear, alway check on the bend of the cables which might be too sharp, causing stiffness in the controls.

Pushing her into gear from a standing position she jumped out the hole in a flash. It’s always nice to feel the power of 4-stroke engines behind you as they propel you quickly and silently, as well as odourlessly without the customary 2-stroke smell. I could not push her too hard in the ugly sea we were negotiating, though, going very light on the throttle and aware of what was happening around me as I put her through her paces.

There were no signs of cavitation as I pushed open the throttle after a sharp turn. Even though she is light there was no indication of broaching in a following sea. Into the swell I proceeded cautiously, as I would with any boat in a sea like this, tapping down when necessary and speeding up when possible.

Overall her performance was very good, as was her stability at a slow troll speed in all directions. 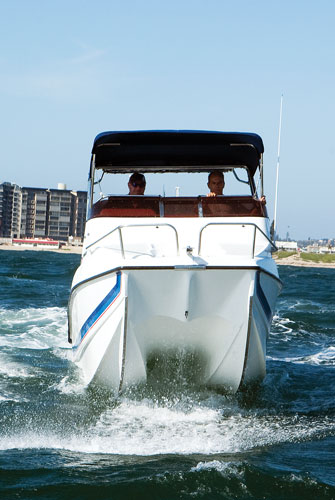 LAYOUT
Like the other Seacats, a lot of thought has gone into the layout.

The anchor hatch is in the accustomed position upfront, ahead of the forward console in which there is ample space available for stowage of tackle and other equipment. In the steering’s dashboard there’s more than enough space for fishfinders and the radios.

Accessibility to the anchor hatch upfront is via a step-up through a removable mid-console window. Swivel chairs for skipper and crew round off the console area.

This Seacat 520 boasts a stainless-steel T-top that can be folded down when the boat is being towed. Extra rod holders have been fitted on top of the T-top.

Flush fuel- and fish hatches have been built into the middle of the deck, and both sides of the boat boast space in the gunnels to store fishing rods. At the stern in the false transom is the livebait well midships, with battery hatches on both sides.

Finally, there are stainless-steel roll bars with rod holders in the stern.

CONCLUSION
The Seacat 520 is an ideal boat for any type of fishing, excluding marlin, whether it be freshwater, bay and estuary or offshore. You would be able to rig her to your own preferences, and layout too is optional. Indeed, everyone has their own ideas on the best layout for their individul requirements.

Like all the other Seacat models on the market, Grant’s workmanship is of the highest standard. Though this might be classed as an “entry-level” craft, I would say that the Seacat 520 is much more than that. Indeed, many old salts have downsized to this smaller yet very capable boat.

It’s nice to know that Grant Reed is one of the few boat builders around who still does R&D on all his products, even during this enduring recession which has crippled a number of dealers over the last couple of years.