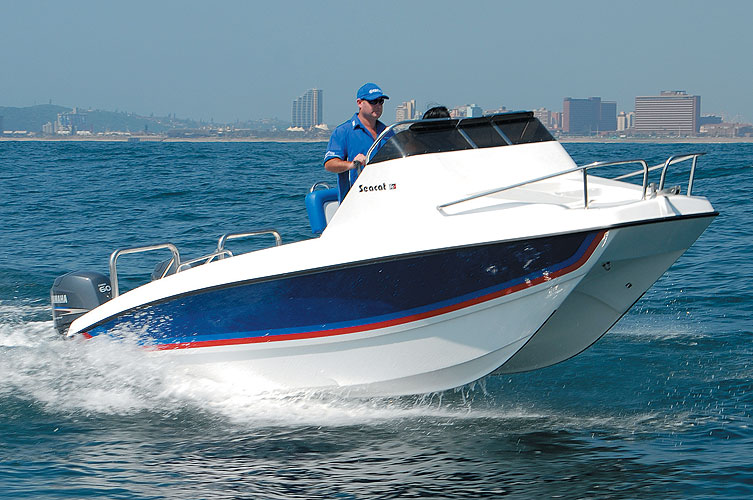 JUST when we thought Yamaha had finished expanding their Seacat range, they’ve surprised us with another model. The latest additions to the fleet are the Seacat 510 forward console and centre console models. These new boats target entry-level ski-boat fishermen as well as the more serious angler who might fish more competitively.

GENERAL IMPRESSIONS
When I saw the both the console and centre console versions arriving at DBSC, I could immediately see they were baby versions of the bigger 565 Seacat.

The shape and colours Yamaha are using on their boats these days are certainly very eye-catching. They’ve clearly been designed by fishermen for fishermen, and sport a very classy look indeed.

CONDITIONS
For a couple of days before the boat test, Durban had been punished by bad weather and strong winds, and although there was no wind and our test took place on a lovely sunny day, the sea was not nice at all. The swell was coming from every direction, and the conditions really gave the boats a thorough test. 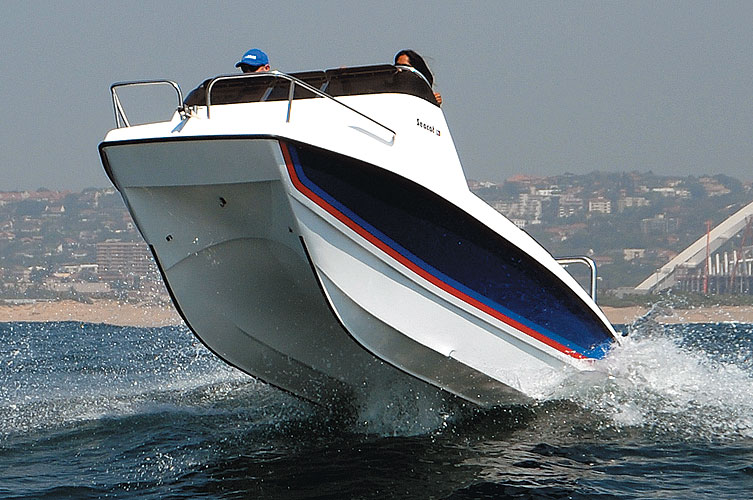 TRAILERING AND LAUNCHING
Like most boats produced these days, the Seacats come on galvanised, breakneck trailers. However, trailer preference is up to the customer. Getting these boats onto the beach and into the water was very simple, especially at Durban Ski-Boat Club. I got onto the Seacat 510 FC, and they just pushed me off the trailer and into the protected surf.

The boat slid off very smoothly, I trimmed the motors halfway down and was able to reverse her and turn her around without any problem. Of course, this can only be done when the sea is flat — as was the case within the protection of the Vetch’s launch area that day — with no shore dumps.

Reloading the boats after the test was also made very easy with the electric winches fitted on to the 4×4. They didn’t even bother to turn the 4×4 around to pull the boats off the beach — they just reversed it. 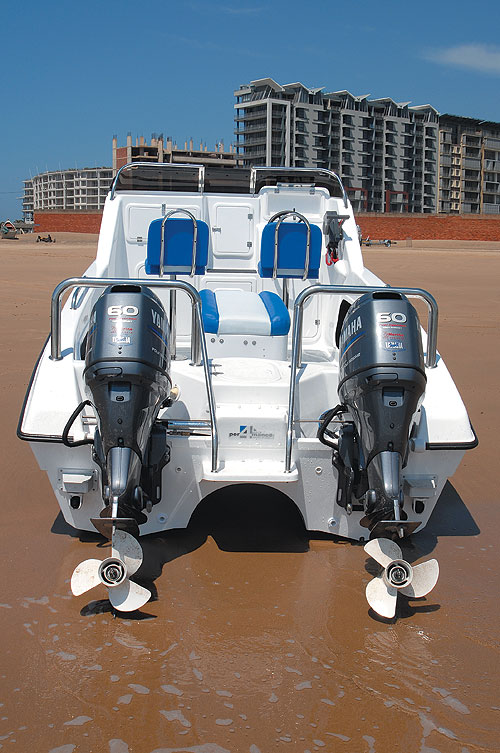 MOTORS AND CONTROLS
I had drawn the Seacat 510 FC for testing that day, and she was fitted with two 60hp Yamaha four-strokes. My first reaction to this was that she was overpowered, and to some extent she was, but I would rather have too much power than too little. She was also fitted with side-mount controls, and getting the four-strokes into and out of gear was very smooth for cable-operated boxes.

These models can be operated with twin 40hp, 50hp or 60hp Yamaha four-strokes.

PERFORMANCE
Being a 16ft (4.9m) boat fitted with twin 60hp Yamaha four-strokes, the Seacat 510 jumped out the hole in a flash. Despite the very unstable sea, the 510 still performed very well, and she remained very dry and stable. Not once did it feel like she wanted to broach or tilt to one side or the other.

I pushed the boat into the swell and drove her with the following sea without changing the trim setting on the engines, and there was no pounding, rolling or broaching. Even on sharp turns I didn’t experience any cavitation.

Personally, I think twin 50hp four-strokes would be more than enough power for this model, and I would have liked to have tested a model fitted with two 50s.

Taking into account a number of fuel efficiency tests that we’ve done over a period of time, I reckon you would save 40 to 50% on your fuel bill if you swopped your two-strokes for four-strokes. Note that this is an approximate saving, because fuel consumption varies depending on the sea conditions and how you drive your boat. 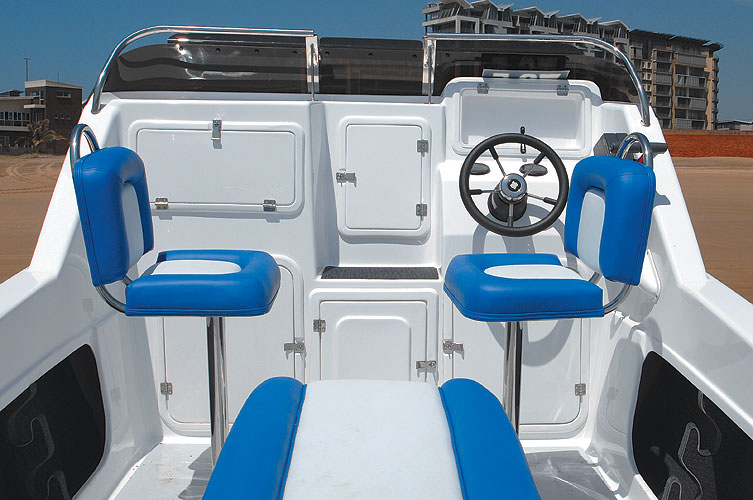 LAYOUT
Looking at the Seacat one notices immediately that they’ve tried to cater for a broad spectrum of the fishermen’s needs. It’s very difficult to make everybody happy, but I reckon they’ve come very close to it.

Let’s start at the stern with the false transom. With the new modern look that they’ve brought into the smaller boats, they’ve got splashwells right at the back, with the higher false transom in front of it. This makes it nearly impossible to get water over the stern and onto the deck.

A livewell has been built into the centre of this false transom. Fish hatches have been fitted into the deck and the fuel tanks fit into a raised hatch-cum-seat in the middle of the deck. The gunnels have been raised to about knee-height, and rod racks have been recessed into them.

The bow area incorporates enough stowage space to store all the excess equipment that might be needed. A pullout window in the middle of the windscreen allows you easy access to the anchor.

One thing that particularly impressed me was that they have made a flat area on the bow of the 510 Seacat just behind the anchor hatch, where you can sit to pull up the anchor or let it down. This is often a problem on some boats with the poor crew member whose turn it is to retrieve or lower the anchor battling to maintain his balance without sliding all over the place.

FISHABILITY
The Seacat 510 FC’s spacious design makes her one of the nicest and most comfortable small boats to fish on, and she can accommodate up to five people very easily. Indeed, she is the ideal smaller boat for targeting gamefish and bottomfish. The attention to detail with the recess in the bow behind the anchor hatch (above, right) just gives her that little bit of an edge.

The 510 FC is very stable when it comes to slow trolling and when you’re on anchor fishing for bottoms, which means overall she’s a stable and comfortable small boat. The 510 FC has a lot of open space and is also ideal for the angler who wants to try flyfishing offshore. With the high gunnels she’s also great for vertical jigging and dropshot fishing.

For those who prefer a centre console version, the 510 CC has room to play with in the fishability department. 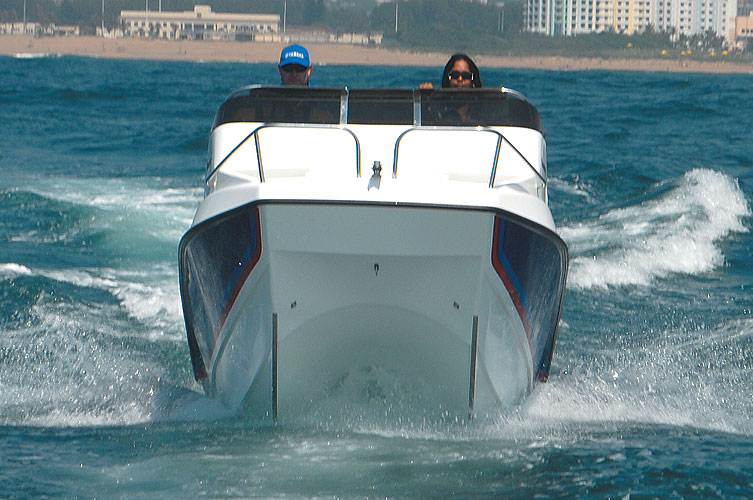 FINISH
Looking at the finish on the Seacat 510, it is clear she follows in the footsteps of the bigger Seacats. She cannot be faulted when it comes to finishing touches — everything fits neatly and tidily into its place — and she clearly fits in with the Yamaha corporate culture of precise efficency.

CONCLUSION
The Seacat 510 FC has been built to cater for the ski-boat fisherman that prefers a smaller boat, and the people at Yamaha have done a great job putting such a neat, tidy, comfortable boat on the market. Indeed, they’ve come a long way in their development of both the 510 FC and the 510 CC, and I am sure they will get the desired results.

Apparently there are also other bigger developments in the pipeline, so watch this space to see what Yamaha have got planned for you.