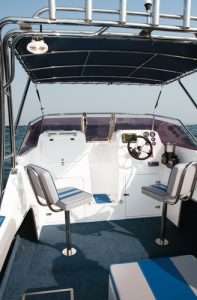 I RECENTLY got a call from Craig Wilson from Honda Marine in Durban asking me to test the new boat they had just launched — the Raptor 660 FC. This 21’ 6” boat was originally designed by Ricky Jacobs, and with some help from Craig they’ve redesigned the top deck and have produced a craft that gives a very good ride. Because neither Craig nor Ricky build boats, they approached Vasy Naidoo of KZN Leisure Boats, a well known boat builder, who agreed to build the boat for Honda Marine Durban.

FIRST IMPRESSION
From a distance The Raptor has fairly similar looks to some of the other big boats on the market, but on closer inspection I found some nice features that you would not find on other boats. She is definitely deserving of more than a second look for prospective boat buyers looking for something in this class, and I liked what I saw.
The first impression is already one of a spacious boat, but it’s only once you get onboard that you realise just how much space there is.

WEATHER CONDITIONS
Although the wind had died down the sea was very bumpy and all over the place. It makes it more difficult to take good pics, but these conditions do give us a true indication of how the boat will react in various situations. 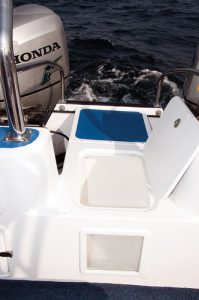 MOTORS, CONTROLS AND PERFORMANCE
The Raptor 660 comes on a custom-made single-axle galvanised breakneck trailer which makes it very easy to load and offload the boat. Her weight on the trailer is in the region of 2.6 tons, and although she is a big boat it’s easy to handle her in the traffic behind your car and on the open road.

This test model was fitted with twin 90hp Honda 4-strokes. I have tested these engines before and consider them to be some of the best 4-strokes on the market. I was a little sceptical at first and thought they might be too small for a boat of this size, but I was blown away by their performance.

She has normal side-mount cable controls with hydraulic steering that makes it easy and comfortable to operate this craft.

From stationary she jumped on the plane in a flash — a good test for a surf launch. The 90hp Honda motors produced more than enough power to get her through the surf safely and back again. Her turning circle is very tight which would also help should you get caught with your pants down and have to turn in the surf.

In general one always has the impression that you need big engines on a big boat, but the twin 90hp Hondas were more than capable of making this boat jump.

I took her a little further offshore and pushed her harder than I would normally push a boat in these conditions. She delivered a smooth ride, soft and very dry — even though we were sometimes airborne. I took her down to a slow troll and pushed up the speed every now and then to experience the different speed conditions for different fish. Even with speeds up to 18 knots she was very dry, comfortable and extremely stable.

After the speed test I ran with the swell. I had no indication that she wanted to broach, whether running along the swells or into the swells at different speeds. I felt totally safe and comfortable, and once again she produced a very dry run.

LAYOUT
This is one of the few boats that I am prepared to say is “built for fishermen by a fisherman”. From the bow to the stern it’s clear they knew what they were doing with the layout. 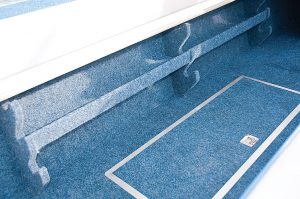 There is easy access to the anchor hatch in the front with a step through the middle of the console and a windscreen that opens. In the deck of the walk-through passage they have put a cooler hatch where you can store anything that needs to be chilled, from beer through to bait.

The console has hatches on both sides in the front, and there are two swivel seats — one for the skipper and one for crew — with a lovely stainless-steel T-top to round it off. This T-top has extra rod holders at the top. There are also spotlights on both sides that could be used for deck lights during night fishing. The anchor light is also fitted on the top.

This T-top can be folded down to reduce wind resistance while towing. The gunnels are more or less knee height which makes them very comfortable to lean against, but not too high if you have to gaff a fish. There’s also place to store rods in the gunnels. 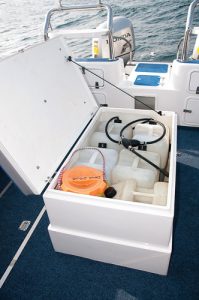 The fish hatches are big enough to easily hold your day’s catches.
In the middle of the deck there’s extra seating on top of the fuel hatches. At the moment the fuel hatch holds six fuel cans, but Ricky indicated that he will be making it bigger to take at least eight fuel cans.

Moving further back you will find the battery boxes in the stern — one on each side. In the centre, between the roll bars, there’s a walk-through for easy access on to the deck when you’re pushing the boat into the water. In the walk-through floor they have included a spacious livebait well with a window in the front. Inside both the roll bars there’s a bait board that is comfortable to use for cutting bait and gives you a place to leave your pliers and knife without worrying that they will fall into the ocean. There’s also extra storage space in the false transom at the back.

This boat is very spacious indeed — five people could easy fish on her without being in each other’s way.

CONCLUSION
I am really impressed with the Raptor 660 and think she’s one of the best all-round boats that I have tested in a long time. Ricky Jacobs is the proud owner of the mould and Craig from Honda Marine in Durban is the proud distributor of this boat countrywide. They should be most satisfied with what they have achieved in the Raptor 660 — no doubt largely due to Vasy’s skill as one of the best boat builders around.

This 21’ 6” boat is worth looking at if you want something big and spacious. She looks good, has enough space for the whole family and all at a price that won’t bankrupt you. What more could you want?