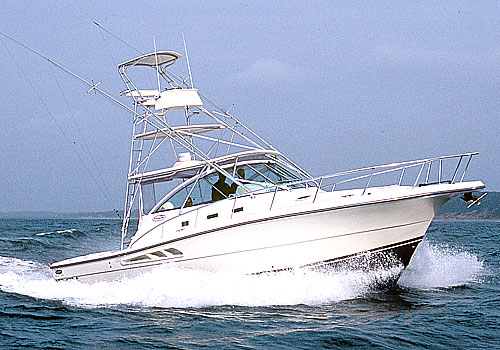 THE Rampage 38 Express could not be missed. Lying at moorings splendid in the early morning light at Richards Bay’s Yacht Club, flying a Rampage insignia from the top of each outrigger, she looked absolutely stunning.

Her Express lines and tuna tower helm station add to her looks and clearly indicate to all who see her that this is a craft built for the true marlin hunter.

In the boating industry the old cliché “designed by fishermen for fishermen” is often toted about, but here in South African waters the Rampage 38 Express can rightfully claim that label. She is a sportfisherman’s dream craft.

Sadly, I had missed the craft’s arrival from North Carolina when the ship carrying her arrived in Durban. Furthermore, by the time I returned from a holiday in Namibia, Tony Lindhorst had not only commissioned her, but also delivered her by sea to Richard’s Bay. There she joined the ever-increasing number of sportfishers based at this KwaZulu-Natal north coast port, tasked with targeting the billfish fishery that we know exists off Zululand.

After viewing the numerous photographs Tony had sent me, I just had to get to Richard’s Bay to review this beauty — sooner rather than later.
Sad as it was, I had to exit the Richard’s Bay harbour at the helm of Broderick Sport’s new 156 Unity Elite cat with the towering Rampage thundering alongside us, making Tony’s son, Justin, and I feel very small in the westerly-driven choppy sea. 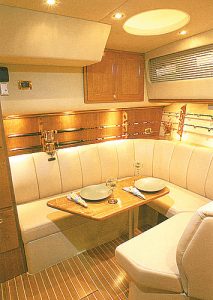 I have said it before, but due to the pure beauty of the spectacle I will say it again: Nothing can look more special, more alive, more beautiful than a fast-running sportfisher in storm-lashed seas, her hull reflecting the soft, early morning sun rays that silhouette her against a dark, clouded sky. That is exactly what I saw that morning as “David” and “Goliath” headed northwards from the harbour mouth.

While I watched her parading back and forth in front of the cameras, I was like a kid being tantalised by something that was just beyond his reach, and yet so close at times that I could almost touch her. Then my chance came — boat-to-boat crossover on the high seas without the aid of a bosun’s chair. Once I was aboard, Tony got out from behind the wheel pretty smartly as the new commanding officer rushed to get his hands on the wheel and throttle levers. I was then a very “happy chappy”.

As I swung her helm around, set course into the east and eased forward the electronic binnacle mounted controls, the Rampage 38 Express came alive. The electronic pulse emanating from the controls in my right hand slipped the craft into gear and had the twin 575hp turbo-charged diesel engines chomping at the bit for more power to send the sportfisher into real action.

Hearing the turbos kick in and feeling the responding forward lunge, I trimmed up her bow a tad and sat back in sheer admiration as we cruised forward in the following sea pushing marginally on the Rampage’s starboard transom. Divine!
With the GPS registering 17 knots SOG, we glided over the choppy sea surface with the only indication that the Rampage’s hull was working hard being the sheets of spray that were thrown aft and wide.

Beating a reciprocal course was the next item on the agenda, only this time I had to put her bow into the prevailing sea to see how her chine and bow flair reacted to taking it “on the chin”.

As I watched the gauges creep up, especially the rev counter, and she eased herself onto the plane, I progressively lowered her bow-up stance to create a more prone attack on the sea. Her speed increased as the hull’s inherent design determined the correct planing stance and the rev counter settled at just under 1 900 rpm, giving us an SOG of 20 knots, a speed at which the craft performed beautifully.

A short burst of increased power had her flying at close to 30 knots. It was adrenaline-pumping stuff, but not necessary, so I brought her back to a 20 knot cruise as we worked our way back down the coast to Richard’s Bay.

When I was out in the deep water I spent an inordinate amount of time trolling the Rampage 38 Express in every conceivable direction in the prevailing sea in order to establish for myself how I felt she would troll lures and stripbaits for billfish. To get a bird’s eye view of the proceedings I also clambered up to the tuna tower helm station. The wake the Rampage 38 Express produced was short and tight, providing beautifully clear water on each side, exactly where a skipper would want to deploy his lures. It was only when we sped up to about 9 knots that the wake began to balloon out, spreading the white water.

Another exercise I relished was undertaking backing-up trials from the tuna tower helm station. I had a perfect view of the deck, the angler in the chair and the surrounding ocean in which a hooked marlin could be swimming. With the helm held stationary and just working the electronic controls, her response was awesome. Full astern at good speed, very little water boiled over the transom and the response I got when swinging her quickly to port or starboard if the need arose proved that, yes, she certainly was designed by fishermen for fishermen.

One final performance aspect that requires mention is her trolling with the fast/slow troll switch mounted in the saloon helm station. With the controls set just into gear and the switch set on slow, she will maintain a troll speed of between 4,5 and 5 knots without any necessary control adjustments — just like cruise control on a motor vehicle. Changing the switch to “fast” gives you a faster troll of between 6,5 and 7 knots. It’s a custom feature that should prove very useful during a long day of trolling lures for billfish.

Many sportfishers now offer the option of an Express configuration. This option is especially popular with owners/fishermen in tropical areas, as it provides a cool helm station in close proximity to the other fishermen who will be working the deck and enjoying their day at sea in the company of their host.

This option — and especially so on the Rampage 38 Express — also provides a large working deck, as well as open and comfortable seating within the confines and protection of the saloon area. Apart from the main windscreen, removable zip-down clears can be deployed to provide total protection from the elements within the saloon area. 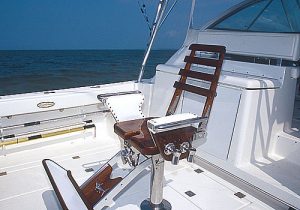 The deck itself is fashioned around a substantial fighting chair. After all, the Rampage is a billfishing machine and as such the rest of the deck has been designed with this purpose in mind. The bait station with ready access to rigging board, the tackle drawers, freezer box and work basin is ideally situated against the helm deck aft bulkhead.

In the transom, a large centre-mounted livebait hatch with a baffle plate, to split the large hatch into two sections, is one of the better livewells I have seen on a craft in our waters. (See page 27 — American rest and recovery livewells.)

Also built into the transom is a large marlin gate (transom door) that gives access to the deck while the craft is at moorings, as well as for loading fish should the occasion arise. The Rampage 38 Express I reviewed did not have the controversial swim platform fitted. I will not delve into the pros and cons of these accessories in this review, other than to say that it’s a hotly debated issue whenever sportfishers are discussed.

I found the upholstered cockpit combing bolsters well placed and they should provide excellent support and grip when wiring a big fish.

Within the confines of the protected helm station there is adequate and comfortable seating for anglers to relax out of the sun, yet still have the ability to quickly be out onto the fish deck the moment action occurs.

The skipper has a fabulous helm station from which to control his craft, with all the gauges and electronics prominently positioned. In addition, the high windscreen affords visibility through glass, as opposed to some craft that use clears. There are clears in the narrow gap between the top of the windscreen and the underside of the helm station roof to allow plenty of fresh air to be forced into the helm station and through to the cockpit area. 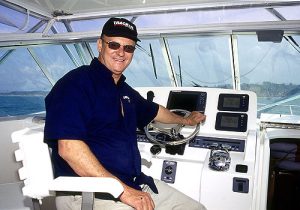 Furthermore, for optimum visibility during fishing the skipper can climb up to the tuna tower helm station which is high enough, whilst not being excessively high as with some towers I have experienced on craft in the United States. Tony and I spent a good deal of time “up top”, and even in the fairly rough sea conditions it was very practical to skipper the Rampage 38 Express from that vantage — and the view was exceptional.

On an Express craft one often needs to sacrifice the niceties of spacious cabins and lounging areas. Not so on this craft as it has a surprisingly large lounging dinette and kitchenette with a full 7ft (2,15m) headroom! In addition, a spacious bathroom with a fully enclosed shower is provided. The main forward berth and double bed is comfortable and spacious.

Above all I was impressed with the quality of workmanship and finishes, and the tasteful way it was all put together. 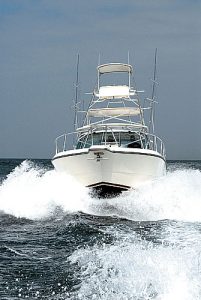 Rampage Sport Fishing Yachts, who manufacture the Rampage 38 Express, have obviously used exceptionally high quality materials and dedicated workmanship to create this craft. A lot of thought has been given to the needs of future users. This shows in details like the backward-hinging helm station. The whole helm station opens backwards after the release of two clips, to give easy and instant access to all the electrical and electronic components of the craft’s nerve centre.

I was also amazed by the way the entire helm station saloon deck is hydraulically raised by a control in the cockpit, to expose the craft’s engine room and its twin 575hp Caterpillar turbo-charged diesel engines. This creates very easy access to undertake pre-launch checks as well as servicing.

I rate the Rampage 38 Express as an extremely efficient fishing machine that balances the use of the craft between work and pleasure very well for practical applications, especially in tropical and sub-tropical regions. For Africa, and especially its fiercely hot East African coast, this craft would fulfill any sportfisherman’s dreams.