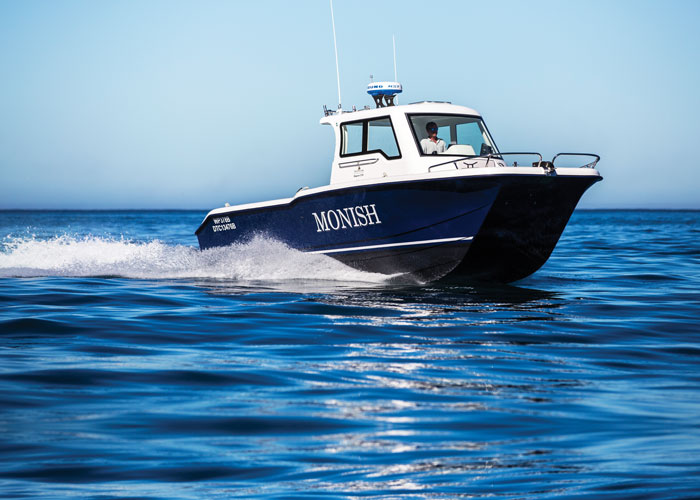 INNOVATION is paramount in any business, but especially if you want to retain your status and keep ahead in the very demanding big boat market here in South Africa.

After an impressive ten years of marketing the Magnum 28 which I reviewed in the January/February 2008 issue of SKI-BOAT, Mark Delany felt it was time to completely redesign the 28 foot offshore sportfishing outboard powered craft.

The last ten years have seen some major developments at Two Oceans Marine’s facilities and in the very big sport- and leisure-boating market as a whole. Within this period Two Oceans proudly produced a 48ft sportfisher Big Bob, without doubt the most impressive sportfisher in this class ever to have been completely manufactured in South Africa. SKI-BOAT reported the progress of the build right up to its full review which appeared in the January/February 2013 issue of the magazine.

Two Oceans has also perfected its technique of manufacturing both sailing and motorised pleasure craft in the 60- to 80ft class. These boats are marketed worldwide and are beautifully finished and customised to meet the very high standards demanded by the fastidious owners of this class of cruising live aboard craft.

When Mark decided to design and build the new Magnum 2750 he stopped building the Magnum 28s because he did not want to disappoint an interim buyer of a 28 while the new 2750 was, as they say, in the mould.

Additionally, Mark felt that much of what Two Oceans had learnt in the making of their super yachts over the last eight years could be incorporated in the new Magnum 2750’s design, construction and finishes, to bring this craft into the new era. 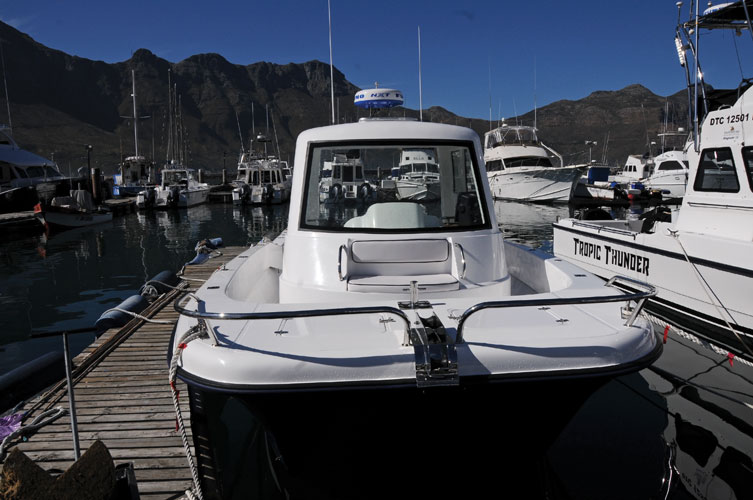 The review was to take place out of Hout Bay’s walk-on marina, and on the day in question I arrived a tad early which allowed me to view a number of Two Oceans Marine’s craft that were moored close to the entrance of the walk way onto the marina itself. I recognised many of the older models of the Magunm range, but one craft with a blue hull caught my attention. Viewing it bow-on I immediately noticed its very different bow entry design, its racy chine and its innovative tunnel upper section. Despite those differences there was still the overall hallmark of a Two Oceans Magnum. When Mark and I walked towards Monish I was not surprised to be told that she was the craft I was about to take to sea and play with in the waters off Hout Bay.

All of us in the SADSAA family know Nishaan Ibrahim from Cape Town and have witnessed his performance in competitive angling circles over many years, culminating in him attaining his Protea Colours during an international competition in Portugal in 2017. I was therefore honoured that I was going to board his recently acquired magnificent craft and experience her ride out at sea in his home waters. Nishaan, thanks for the privilege, mate. I know Monish will fulfil all your dreams out there in the deep.

Being a nigh perfect morning, I set a course out of the bay and out of calm waters into an area of reasonable swell topped by a moderate cross swell wind chop. It wasn’t ideal as I would have preferred a lot more wind during the review, but speed and the craft’s own wake provided me with sufficient feel of the boat’s performance to appreciate not only her ride, but also how different it is to that of the previous models. 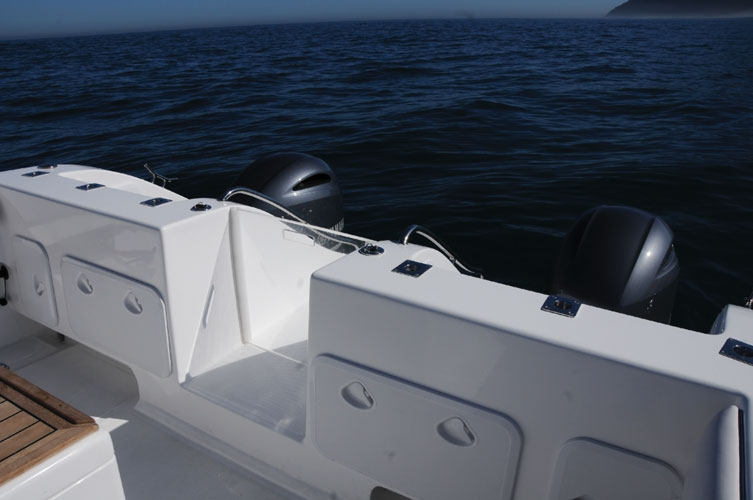 At the outset with the twin 200hp 4-stroke Yamahas swinging 16 pitch Solas props and revving at 3 800 rpm, we literally glided over the rippled bay water at my preferred SOG of 20 knots.

Under these conditions, as can be seen in the accompanying photographs, she has a racing stance over the water, with her bow area cleaving the water. On the plane she achievies her natural forward projection with the water spray being dissipated low and very far aft.

I played with the motors trims using various up and down settings in search of differing speeds at fixed throttle settings to determine where she delivered the smoothest ride. In the end I found a marginal up trim from her lowest settings was best. Using her natural design while on the plane is how she rides best, extracting the maximum thrust from the motors to obtain forward momentum instead of using motor torque to lift this big craft’s bow out of the water to obtain ride comfort.

When we eventually got into rougher water I repeated these exacting trials and was very pleased to note that the above parameters provided us with as comfortable a ride as we had experienced inshore.

Of course no craft performs equally in the diverse and ever-changing conditions that both sea and wind can provide, so in some instances we have to make educated guesses — based on extensive experience — of how a craft will behave under certain circumstances.

The Magnum 2750 ticked all the boxes I use when reviewing a craft. At sea — in flat water and fairly rough, head seas or following seas, in tight turns and more importantly pulling out of such turns — this craft has it all.

I need to elaborate a tad on the latter statement regarding the use of this craft in point-break surf launch sites such a Sodwana Bay. In such conditions, for a craft this size, the critical aspect is ensuring you have the necessary torque to provide the thrust to get the craft up and onto a plane in as short a distance as possible. Then there’s the attack on a starboard beam cresting wave where one needs to slow down when cresting its shoulder, then get back up to full plane speed. I put Monish through this exercise numerous times and she did everything I expected of her.

As she’s a sportfishing craft, I ran tests from slow trolling on one motor to marlin troll speed of 8 knots, and I found Monish to be very stable laterally, and her redesigned bow holds a steady and controlled troll path very comfortably. Her low-speed wake pattern is very tight, only starting to spread out over 7 knots SOW. Even at 9 knots there are a lot of clean water “holes” in the proverbial third wake in which to run a marlin lure off the short riggers.

Monish, destined to fish the tuna-rich waters off Cape Point, has a fish deck layout that’s perfectly suited for this style of operation. Essentially it’s a top deck laid out around a huge fish box! 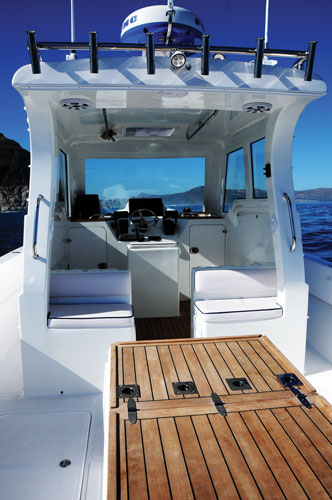 Let’s begin with the basic design of a walkaround-style deck with a spacious wheelhouse/cabin, high gunnels and sufficient space to follow a big tuna while coupled onto a Black Magic harness. Anglers will be happy to know the Magnum 2750 will provide 360 degrees of fishability as well as comfort for crew to move up forward for peace and quiet. When it comes to the main cockpit area, the niceties of the design and layout have been styled after many years of experience catering for the demands of the hardest working anglers in South Africa — the tuna catchers off Cape Point.

The so-called coffin hatch centrally placed on the fish deck is vital when you’re fishing in the Cape as it serves both as a work station and a massive fish box. This above-deck hatch comes in two designs — the normal fish hatch (as seen in the accompanying photographs) and another upgraded version that will be covered in the next issue of SKI-BOAT when I review the restyled Magnum 32 launched out of Plettenberg Bay.

For those who might want to use the Magnum 2750 for marlin fishing or gamefishing, a substantial fighting chair can be installed in place of the coffin hatch or you could simply have a large, unhindered fishdeck for gamefishing or entertaining.

As a skipper who spends an inordinate amount of time at the helm, I place a great deal of importance on the overall design, layout and appointment of the helm station. Nishaan is obviously of the same ilk and the design of Monish’s helm station is superb.

Even though cabin width has been sacrificed to accommodate the walk-around area, the cabin is still very spacious. Using the new concept of a centrally positioned steering wheel and throttle controls not only provides the skipper with plenty of elbow room, but also allows space for two other crew to move up forward for total protection and forward view. Further aft, yet still well protected from the sun, sea and wind, is comfortable seating for those long runs to and from the deep. 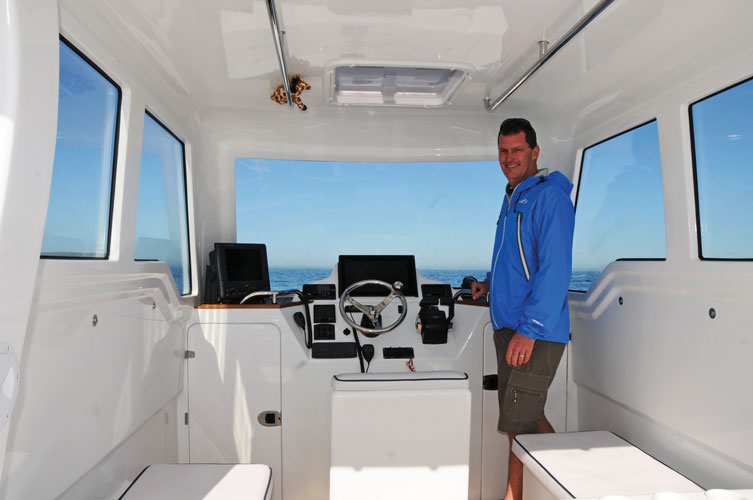 While attempting to overview the luxuries of the internal helm station/cabin of Monish I noted the easily accessible yet private port side toilet extending forward of the main helm station partition.

This craft has a complete array of electronics including Furuno radar, sonar, auto pilot and navigation accessories that are ideally placed for practical use by the helmsman. Together with the already mentioned well-organised helm and controls, this makes skippering Monish an absolute pleasure.

To finally finish off the craft, Two Oceans Marine have designed a set of fibre-composite cabin closure panels that not only make the craft’s interior secure whilst on moorings, but also look stylish when they’re in place. They are very simple to fit and remove when access to the cabin is required, and the fold up system takes up little space when left on the mooring while you’re out at sea.

As can be seen from the main photograph of Monish speeding across the water of Hout Bay, she is stylish and beautiful. Her new overall design with a hint of the Two Oceans Marine pedigree, combined with finishes that have become the hallmark of the company’s success over the last 25 years all combine to make the Magum 2750 a perfect offshore sportfishing craft.