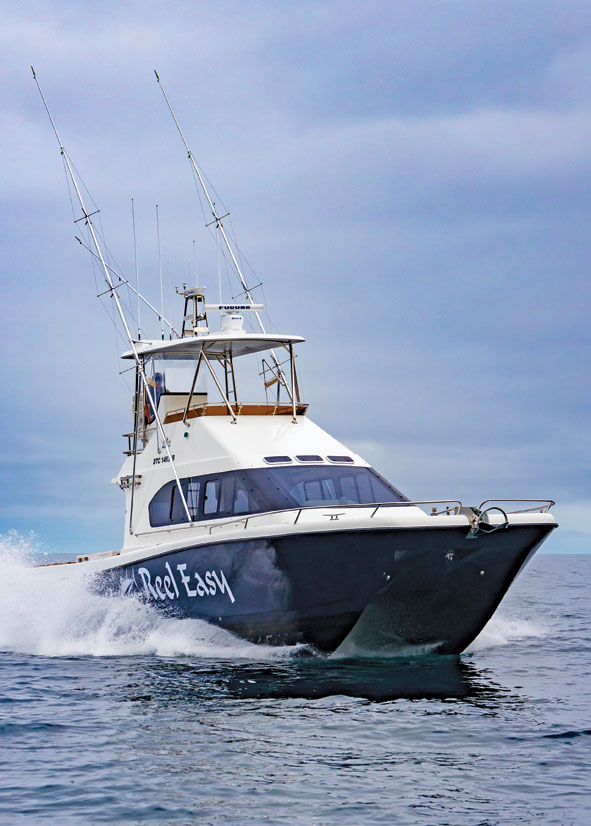 WALKING down the ramp of Hout Bay Marina I was forced to stop in my tracks, for there in front of me was an array of some of South Africa’s finest offshore recreational craft. Many of these beauties were made in Cape Town by Two Oceans Marine. In between the Magnum 32s lying at mooring was the amazing 750 Powercat Quo Vadis on which I spent a few days in the Bazaruto Archipelago, and two of the latest Magnum 46s which I was due to review.
To put it mildly, I was blown away. 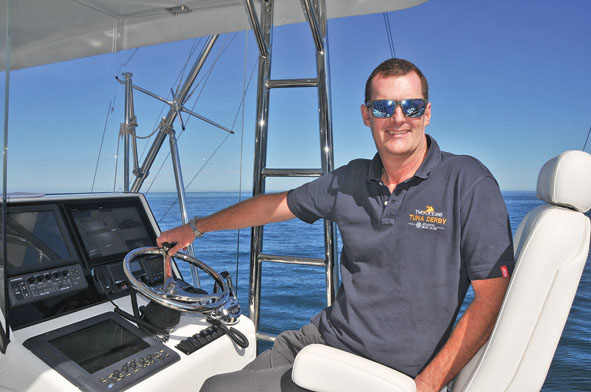 Mark Delany, MD of Two Oceans Marine [pictured above], and the crew of Reel Easy, a Magnum 46, were there to take me to sea to experience not only what one of their newest craft is capable of, but also to get a closer look at her impeccable layout and finishes.
Reel Easy is the sister craft of Reel Therapy, a Magnum 32 I reviewed off Plettenberg Bay (see the September/October 2018 issue of SKI-BOAT). At the time I described her as “wider, bigger and higher” than the previous Magnum 32 models. The Magnum 46 has taken this range of offshore sportfishing craft to a completely new level. As for suitable adjectives, none can adequately describe these highly impressive craft; the only way to get a full appreciation of them is to physically view the craft.
Reel Easy has been specifically designed and finished for use as a recreational craft targeting tuna in the deep waters off Cape Point. She will, more than adequately, provide a platform to catch these fish, but those aboard will also enjoy the experience in ultimate comfort. Every conceivable onboard facility is available to enable even the most fanatical anglers to participate in this sport under the most advantageous conditions.
The second Magnum 46 in the Hout Bay Marina, Andiamo, is destined to be moored at Desroches in Seychelles. Her deck layout and, to a degree, internal configuration are different to those of Reel Easy, to take into account her specific use. Andiamo will provide her owners and guests with a beautiful platform for scuba diving, flyfishing, light tackle gamefishing as well as targeting billfish and dogtooth tuna.
Reel Easy, unlike all the other Magnums I have reviewed, is not powered by outboard motors, but by twin 550hp Cummins Q5B67 diesel inboard shaft drive motors. This not only changes the dynamics of the Magnum’s on-water performance and feel, but also moves her into the realms of the sportfisher class of craft.
Before I took her helm, Mark manoeuvred her off her moorings and out to sea through Hout Bay Harbour.
The deep-throated growl as her props grabbed the water, and the slight shudder transmitted through the craft, so indicative of the running feel of big sportfishers, sent a tingle through me. It’s incredibly exciting as one pushes the throttles forward. Even though much is done to limit engine noise, the shudder and the way the craft gets up onto the plane is an unbeatable adrenaline rush for me in recreational boating.
The revolutions climbed as I moved the single throttle lever forward. After electronically synchronising the throttle, I could feel the hull over water performance as she climbed onto the plane and settled at 21 knots at 2 550rpm.
Seated as I was up on the fly bridge, protected from the cold wind by a heavy, clear perspex screen, viewing a formidable array of electronic displays and engine gauges, whilst relaxing in one of the most comfortable helm seats I have experienced, I felt I was as close to heaven as I will probably ever get.
Fortunately — some may say unfortunately — the sea off Hout Bay was very calm, with only a slight southerly wind on the day of the review. At a range of speeds just over 25 knots at 2 800rpm, she literally glided over the ocean’s surface. I have no penchant for testing a craft’s top speed, but Mark told me that during a speed trial she maxed out at 3 200rpm producing a SOW of 33 knots.
I was not personally able to try her in rough water, but apparently during a recent competition off the same port running out to the deep was very rough, and whereas the majority of the fleet could barely achieve 18/20 knots Reel Easy maintained a ride of 25 knots. I was further told that in a big following sea this craft, with her weighty engines situated relatively far aft, provides a stable and safe ride. So often in the deep off Cape Point some serious seas are experienced while hunting big tuna and chasing from trawler to trawler, but I’m led to believe Reel Easy handles these situation with aplomb as well as speed. 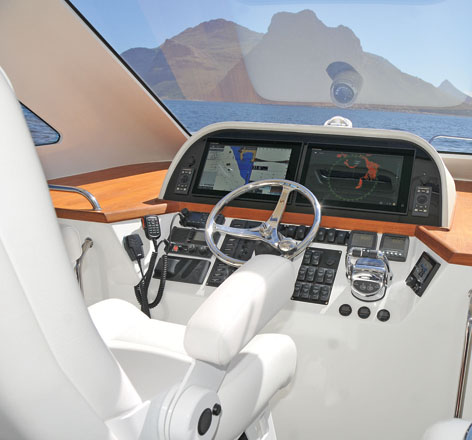 The dual helm stations situated in the saloon and on the fly bridge are equally well endowed with instrumentation and electronics — and amazingly comfortable helm chairs. Furuno electronics in large format have been used, including a large screen sounder display on the port side of the saloon entrance to enable anglers to view the sounding while they’re fishing.
On this trip I had my first personal experience of the use of the Furuno sonar scanning system that makes use of a retractable pod in the port sponson. We played around picking up shoals of dolphins and seals and tracking them, as this 360 degree scanner can also track from the surface to the seabed.
Drawing on their own practical experiences, Mark and the marine designers have put a huge amount of thought into the fishing deck’s layout and design. Bearing in mind that Reel Easy’s main target will be big yellowfin tuna in the world class tuna fishery situated off Cape Point, and the fact that the trend of standup fishing is firmly entrenched, the entire fish deck on Reel Easy is dedicated to anglers harnessed up to ply their “trade”. 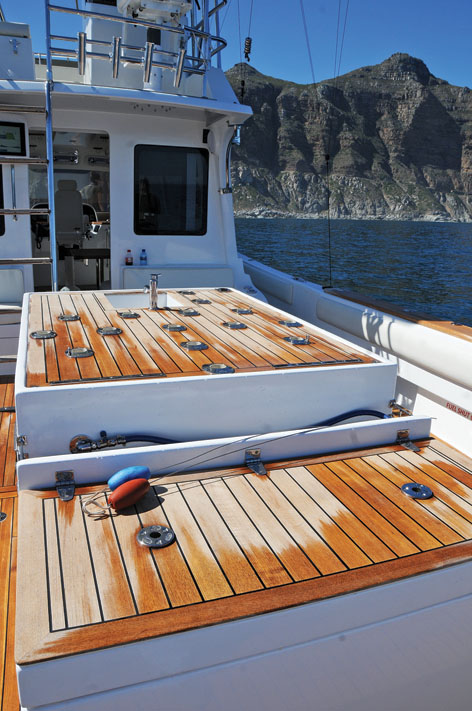 A close inspection of the accompanying photographs will show not only the large centralised console with an aft-situated tuna prep station, but also easy access to the vertically stored array of rods. On the console’s starboard face is an accessible rack for harnesses, and on the port side a tackle rack with removable drawers. When anglers are tackling up, the entire drawer is removed and placed on top of the console. On the aft fish prep console, knives, spining rods and hand spray are readily available, as is a foam mat for the fish to be placed on for processing. A high-pressure deck wash ensures a totally clean deck after working one’s fish.
On the craft’s aft port side is a water spray used to attract tuna.
Reel Easy also has facilities to carry a ton of ice to ensure the yellowfin tuna caught are not only quickly cooled down, but are also kept on ice for the long ride back to port, all to ensure a top quality product for consumption.
Lastly there’s a handwash basin where the anglers can clean up after working their fish. Hot and cold water is available.
The entire deck and saloon layout has been designed to create a walk around that provides adequate space for an angler coupled to his tackle and a large tuna to be able to follow it the entire perimeter of the craft. The gunnels have been set at the correct above-deck height to facilitate standup fishing, and anglers have the ability to lean back against the saloon’s outer side for comfort or rest during the fight.
Finally, in terms of the deck layout, there are two enormous fish hatches that can each easily accommodate a 100kg tuna and ice to keep it cold.
The surrounding deck is clad in teak, and the semi aft hatches giving access to the two Cummins motors are properly sealed to reduce noise and prevent deck water from getting into the motor well.
A pair of Lee’s bracket outriggers have also been fitted for use when the owner wants to go billfishing. Not only are these very practically placed and easy to run lures from, but they also add tremendously to the overall appearance of this magnificent sportfisher. 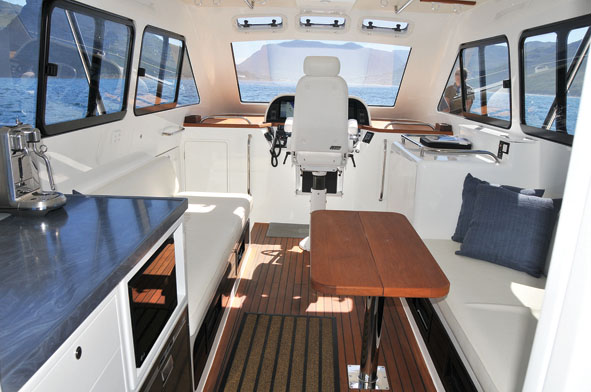 Creature comforts for those aboard have certainly not been ignored, as the internal layout of the saloon, the two below-deck siesta cabins, the heads and shower ensures they are all easily accessible even in rough weather. All these areas are also immaculately fitted out for the purpose they serve.
As an example, the long seats in the saloon have been widened to not only ensure very comfortable seating, but also so that they’re wide enough to lie down on during periods of inactivity. Quick access to the fish deck is via wide glass doors so you can reach your rod quickly if the reels start screaming.
I also appreciated the saloon table that can be folded in half if necessary, but even when it’s fully open a big guy can slide in behind it with ease.
In the aft section of the saloon there’s a practically sized galley incorporating an induction stove, microwave and fridge, with adequate accessible storage for dry foods as well as all the necessary crockery and cutlery.
On each side of the saloon helm station there’s access down into the single berth sited midship in each sponson. These are both very comfortable with good ceiling heights and ventilation via a small window high up on the cabin’s inward panel. Neat yet private.
In the forward area of the port sponson there’s an electric head, and in the starboard sponson the hot and cold-water shower. Once again these below-deck facilities are spacious and would be very practical to use even in inclement weather. The wooden steps leading down to these facilities have wide treads, so climbing down and up is extremely easy.
Have a look at the accompanying photographs of Reel Easy as she planed over the ocean’s surface off Hout Bay, and you’ll see what I mean when I say that although she has the feel of a sportfisher, she has the head-on sea attack of a very large ski-boat.
After getting the feel of her through various manoeuvres and getting over my awe at the instrumentation and helm, I was able to concentrate on how well she performs as a craft over water. At speed her hull not only throws its wake far aft, but one can also feel her getting onto the plane, reducing her wetted area and literally gliding over the surface. If one had only a quick glance at the photos, one might even mistake her for a 30ft ski-boat. However, with just one look at the main photo at the start of this article, you will agree that Reel Easy is magnificent.
My last task in the review of this Magnum 46 is to cover her overall finishes. That’s not an easy task as I could elaborate in detail for days, but space precludes me from saying much except that the work that goes into this side of her production is formidable.
I watched internal components for another Magnum being made in Two Oceans’ huge factory and was impressed at the precision and accuracy required, yet seeing them installed takes this workmanship to an entirely new level. Wherever I looked — including behind drawers and cupboards — everything was beautifully finished and robust enough to take on the “shake, rattle and roll” she endures when fighting the wild waters off Cape Town.
The finishes on Reel Easy are not skin deep and the stainless steel and aluminium fittings are of a high and durable standard that all together help to make this craft simply stunning.
The two Magnum 46s I reviewed are a credit to all those involved in their conception and manufacture, and must be dreams come true for the owners who have placed their faith in Two Oceans Marine.