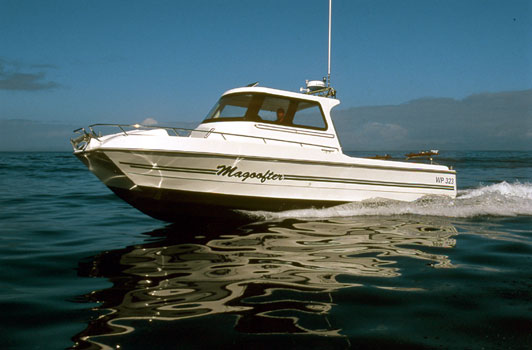 The place was Harbour Island, Gordon’s Bay, the boat the new Magnum 32 Walkaround and Patrick Christodoulou the man I really wouldn’t mind swapping lifestyles with.

“I want a fast — very fast — craft for tuna fishing off Cape Point, some 40 nautical miles towards the horizon,” he’d told Mark Delaney of Two Oceans Marine. “It must carry a good quantity of fish, must be stable, and must be a walkaround so I can easily follow a big yellowfin tuna right around the boat while strapped into a Black Magic standup harness. Also it must have a comfortable, protected helm station to allow my crew and I an enjoyable day at sea, regardless of the weather. By the way, it must also give me a smooth, fast ride, both into and with a big sea.”

Over the years Mark has had numerous requests deviating from his standard designed craft. Always open to new ways of modernising the popular Magnum 32 range of craft, Mark and his father Rod have now redesigned the top deck configuration of this craft. 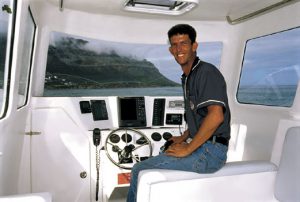 In her full cabin, conventional sportfisher configuration (see SKI-BOAT May/June 2004), the Magnum 32 has proved to be an extremely good performer, especially in the Cape seas with their big swells and wind-blown crests. Mark and Rod believed that this hull, combined with a total redesign of the wheelhouse and deck area, would provide the craft that Patrick — a very serious sport angler —would be happy with.

This was how the Magnum 32 Walkaround was conceived. I was completely unaware of the design process that was going on during the “labour” period, and only after birth was I informed that the Magnum 32 Sportfisher had a new sister. All this made for a wonderful surprise, and seeing her at her moorings, surrounded by the opulence and tranquillity of Harbour Island — soaking up the bright, early morning sun — stopped me in my tracks.

In a moment of nostalgia, I thought back to the 1990s and Tony de la Fontein’s dream of Harbour Island. The reality is more than impressive — it’s working. We enjoyed the full impact of Harbour Island as Mark and I wound our way through canals, following the Magnum 32 Walkaround aboard the Magnum 25 photography boat, then under a raised security boom past its waterfront, the main marina and Gordon’s Bay Deep Sea Angling Club’s clubhouse, and through the breakwater into a welcoming False Bay.

The sun was out and there was minimal wind, a south-westerly of roughly four knots, but the sea had a short, rather steep swell to it that Patrick said resulted from day after day of howling south-easters.

This was the setting in which the Magnum 32 Walkaround performed for the cameras. Patrick likes power and speed, and with twin 300hp Yamaha fuel injected motors providing the thrust, he had more than enough of both. As the craft spun, jumped and whistled past, I had a problem framing her through the camera’s viewfinder. Why? Well, she is 32 feet long, and with her thundering across my view at 30-plus knots, the camera work was a bit more difficult than if she had been an 18ft ski-boat.

Later, after we had returned the Magnum 25 to her berth, I was allowed to take command of the vessel and get a better feel of what she was actually capable of. She is far from “a ski-boat viewed through a magnifying glass”; rather, she’s a sportfisher with the eagerness and performance abilities of a smaller craft.

As I cruised out along the open water channel and between the two marker buoys indicating its extremity, I was at last able to ease the throttles forward and feel the immense power as the big craft got onto the plane. The combination of craft size and motor torque in the initial moments of my first time behind the wheel was very daunting, but as we tracked along the corrugated water surface of False Bay in a beam sea, I quickly got her measure and started to treat her like a ski-boat and not a sportfisher. It was then that the fun began.

As I mentioned, Yamaha’s latest 300hp fuel-injected motors, swinging counter-rotating 17-pitch stainless Yamaha offshore saltwater series propellers, had been mounted on the Magnum 32’s transom. It was the first time I had actually seen these awesome machines on the back of a boat, and not only did they look impressive and push the Magnum with incredible power, but they were also smooth in operation right through their power range.

At idle I found them surprisingly quiet for two-strokes. Even at high speed the roar of these giant outboards doing 5 000 rpm was not excessive although I was, admittedly, protected within the confines of the cabin and the wind was forcing the motor noise backwards. However, the sound of the engines did add to the excitement of power and speed as the big craft screamed over the water’s surface at 34 knots. Patrick told me that at full taps he had got 40 knots out of her at 5 600 rpm.

With the exciting high-speed session having satisfied my urge to play, I settled     down to seriously judge this craft’s performance over water. I did that by setting a course of 260° towards Cape Point and the traditional tuna hunting grounds.

Without looking at the instrumentation I gradually increased speed to a point at which I felt the boat, crew and I would be comfortable for a two-hour ride. When I reached a speed that was comfortable, yet fast enough to ensure we would get to the fish on time, the GPS recorded 3 800 rpm and 24 knots. Interestingly, on the subsequent reciprocal course at the same revs we averaged 27/28 knots. According to the Yamaha gauges, at these speeds the fuel consumption of the two motors was marginally less than 80 litres per hour.

To describe this craft’s ride is difficult, for while she feels like a ski-boat, her overall size and weight put her well into the sportfisher category. She certainly demonstrates both the lateral stability as well as the forward unrestrained push over the water of those bigger boats.

Due to her length, she also tends to ride according to her hull-design and needed very little change in trim. Even running with the sea I only trimmed her up marginally. Later, when viewing the many photographs and comparing them with the Magnum 32 flybridge model I had reviewed a year previously, a sleek, almost prone ride is very apparent. 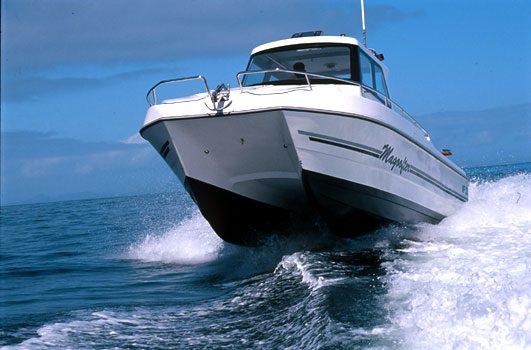 In all the slower troll speed trials, between 2- and 8 knots, her size and build give her the ride and stability of a sportfisher and a short and very confined wake.

I could not resist trying her in some seriously tight turns, the sort I would put a ski-boat through in simulated surf work. She was amazing and electrifying, with the twin 300hp motors roaring as I treated them like a pair of 100s on a 20ft craft. Using predominantly port turns as one would at Sodwana, she swung surprisingly tightly for her length. Pulling her out of the turn was easy, followed by an out-of-the-hole jump that was just awesome. I would have no hesitation taking her to sea at Sodwana.

Taking her from zero to 20 knots from out of the hole was a consistent seven seconds on the stopwatch. Yes, we had lots of fun!

With motors trimmed out quite a bit she backed up reasonably well, the reverse rev protection being the major inhibiting factor. One can only rev these motors so much in reverse. Patrick has become very adept at manoeuvring this big craft in the tight confines of his moorings. It’s a particularly difficult exercise with outboard motor-driven boats of this size, as opposed to shaft-driven craft.
Finally, I performed a single motor test on her. She planed at 20 knots on her starboard motor and 19 on the port at full throttle which reached 5 000 rpm. This trial was done with the “off” motor trimmed up.

The accompanying photographs will show you a very different Magnum to her older sisters. The redesigned top deck — its stylish wheelhouse/cabin and walkaround which give functionality to the foredeck area — has made it an awesome fishing machine.

And, indeed, it’s this craft’s fishability that hooked Patrick. The Magnum 32 caters for all his fishing requirements, whether he’s ardently fishing for tuna in the deep, or chasing yellowtail and geelbek within False Bay. Harnessed to an 80kg yellowfin, an angler can easily walk the total circumference of the craft — in safety. With the high sides and wide walkway, even a large South African angler will not feel restricted.

Throwing spoons or, as they do in the Cape, casting poppers for yellowtail is also made a lot more practical with the open, reasonably large foredeck. Aft you still have a very big cockpit area where five crew can fit shoulder to shoulder while fighting tuna in a “dik”. 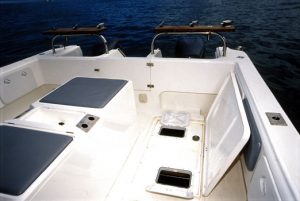 In the deck area, two under-deck, built-in 375 litre aluminium fuel tanks are situated amidships, with a large two-metre insulated fish hatch positioned aft in each sponson. A coffin-style above-deck hatch is centrally situated on the fishing deck, with the aft two-thirds available for small fish storage, which Patrick uses for longfin tuna and yellowtail. The forward third is insulated and is designed to hold eight 5kg boxes of sardines and one’s supply of cool drinks.

The wheelhouse, or cabin, is spacious and comfortable for both the skipper and his crew, with practical seating within the protection of the wheelhouse, yet still giving the angler a full view of the deck. A number of stainless-steel grab rails are conveniently situated for crew to hold onto if the sea gets rough.

Moving onto the helm station, firstly it’s one of the most practical I have used on this size craft. Not only are the steering and throttles in a very comfortable position, but the instrumentation and gauges are also angled and positioned in a way that made them all easy to see.

Internally, the design and finish are of a high standard, but above all it’s user-friendly and practical for what is primarily an offshore sportfisher. The extremely large shatterproof glass windows will ensure that both the skipper and crew have virtually 360° views. 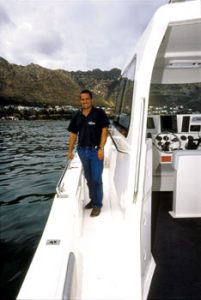 Two Oceans Marine have not tried to build in or provide a sleeping area. Instead they’ve used the space ahead of the helm station for a storage area which is accessible through the port front door. Behind the matching starboard door is a large set of shelves for stowage of personal items or fishing tackle. Their reasoning behind this design is that they wanted to use the space to create the rounded forward features of the wheelhouse, as well as to enlarge the forward deck area for practical fishing.

Another good idea is the forward seat with serious grab rails for the angler who is upfront, put in position to cast a lure to boiling surface-feeding gamefish.

The layout is also ideal for fly-casting and open enough for the skipper to follow up on a rapidly departing hooked fish.

The Magnum 32 Walkaround is certainly going to make quite an impact among serious offshore anglers. She is capable of travelling long distances at speed, while still offering those aboard both comfort and protection from the elements. What’s more, she would be ideal for light-tackle inshore fishing and flyfishing.