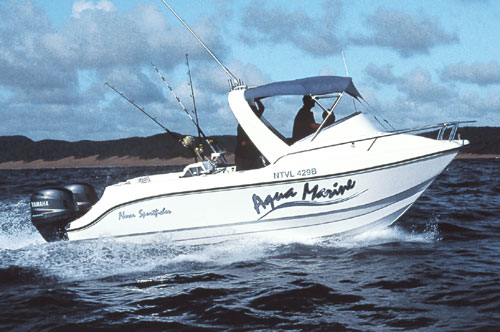 THE Nova Sportfisher — and then there were four! Yes, this was my introduction to the new Novas Marine 22 footer presented as only Bou Raath could. All four versions of his 22ft sportfisher were lined up on the beach at Sodwana, ready to be launched and reviewed.

Bou is the owner of Marlin Lodge in the Bazaruto Archipelago as well as Novas Marine with its factory in Pretoria. He is renowned for requiring 110%-plus for every job done for him, and in return provides his clients with product- and service-excellence of a higher order.

I was not only surprised but, may I say, awestruck when I saw the four magnificent craft on display on Sodwana’s beach, bathed in the soft rays of the early morning sun. They were four identical hulls, but each one sported a different styled top-deck configuration, and each had different motors and horsepower.
From a sportfisher with flybridge and riggers to an express soft-top model that ranks on a par with any large conventional ski-boat, they not only all have specialised uses, but will appeal to offshore boating enthusiasts across the board, covering all preferences.

After the success of the 27 foot Nova Cat I tested at Richards Bay in the September/October 2003 issue of SKI-BOAT, Bou Raath became increasingly aware of the difficulties associated with towing, launching and retrieving a rig of this size, let alone the costs associated with it. In his words, “I wanted to manufacture a craft that, to a degree, took the top-end of the ski-boat market into the realms of the sportfisher. It had to be a craft that could be towed, launched and retrieved by a large 4×4. Furthermore, it had to fall into a price range that was comparable with the top-end ski-boats.”

Has he done it with his 22 footers? Yes, I believe he has. The 4x4s did all the work during two days of launching and retrieving on a very soft Sodwana beach. No tractors were needed, and there weren’t any hassles. 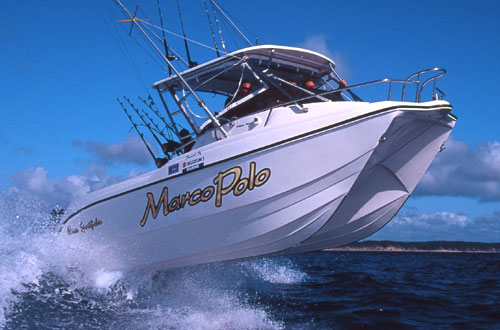 The Nova Sportfisher is a “babied-down” version of the Nova Cat 27, a craft that has proved her pedigree as a “mean, mean marlin machine”, particularly in the waters of the Bazaruto Archipelago. Using this as a basis, Bou wanted to produce a smaller craft that would provide a platform for serious marlin fishing for big, big fish, without compromising safety or practicality when playing this serious sport.

To do this he had to maximise deck space and gunnel height, provide a substantial fighting chair, have an airy yet waterproof cabin area, and provide the crew with the ability to watch the rods and the outriggers effectively, even in rough sea conditions. Above all, the boat had be able to troll at six to eight knots in seas generally churned up by ten to 20 knot winds.

Throughout the review I will attempt to visit each of these criteria and assess Bou’s achievements in line with my experience as a marlin angler on both big and small craft.

The boats under review were:

It was a formidable array of craft indeed, and the first I was destined to ride was Hot Rod — with the emphasis on “Hot”. Her twin 200hp Yamahas provided awesome power, in fact too much in the choppy north-easterly sea that was running during the first day of the reviews. I found with the ultra-smooth controls I had to be careful not to inadvertedly push the throttles forward too quickly, for this instantly made the craft jump.

It was great having all this power, especially when running on one motor, but throughout my time on Hot Rod I never took the revs above 4 000. The range mainly hovered around the 3 000 rpm mark which ran the craft at over 20 knots, which was all the rough sea permitted.

Of particular note with this craft was the way she performed with an aft beam sea as I set a course from Jesser Point to deep off Diep Gat South. She really loved it and rode outstandingly well at speeds of up to 30 knots. But when I found a flat — not often, I might add — and needed an adrenaline rush, I pushed her a bit. It was exhilarating!

The Nova Sportfisher reacts very positively to trim, and so I used this to test the craft through the entire trim range. All the Nova Sportfishers on review loved a fair amount of bow-up, with possibly the exception of the soft-top model. Why? Read on …

To finally put into perspective the aerofoil effect of substantial fixed T-tops on a craft, Derek van Deventer and I put this craft through a number of tests, correlating speed, revs and motor trim positions, firstly while the clears were up, and then when they were firmly down. All aboard Hot Rod agreed — and later, when we did the same with Team Mercury, I finally convinced Bradd Kidd — that clears

on fixed T-tops contribute to a major difference in the craft’s performance.

What the clears do when down is alleviate the aerofoil effect of forward momentum and wind speed under the fixed cabin top/T-top. With the clears down the craft required more bow-up trim as the wind does not lift the craft. It substantially reduces the effect of wind spillage when the craft, driven by a beam wave, leans move heavily on one sponson.

The benefit of roll-up clears is substantial, especially in our hot climate. One gets the full advantage of fresh air while under shade and trolling, yet it can protect all aboard from wind-driven spray, if required.

It was, however, Brad Kidd’s new Team Mercury, the flybridge Nova Sportfisher I had travelled to Sodwana to review, but I had to wait until the second day to be allowed to board her. On the first day Brad, with his crew of Poison van Zyl, Sean van Veijeren and Willie van Jaarsveld (the man who actually makes these boats) disappeared out to sea after showing off for the cameras, totally forsaking poor I. Their only salvation was that they blooded the new boat with her first fish, a sailfish. Perhaps I should not use the word “blooded”, as they released the sailie. Willie was the angler, and it was also his first sail.

When I finally got aboard Team Mercury I had to push them all aside to get to the controls, amidst mutters that they wanted to troll for marlin.

With the 22ft Nova Sportfisher finally under my command, and with a complement of six aboard, we headed into a north-easterly sea and wind of about eight to ten knots still from that direction. At a speed of 14 knots — that’s all the sea would allow — we made good, reasonably comfortable progress. It was the occasional crest and hole that prevented me from increasing speed. However, once I turned her bow to starboard and aligned her run across the swell face, not only was I able to increase speed dramatically, but she virtually glided over the water.

With a following sea, and especially when we eventually ran in through a moderately big surf, she showed no tendency to yaw or dig in her bow. Considering her superstructure and the number of crew aboard, this was really impressive.

In the surf itself and during tight turns out at sea, the twin Mercury 115 Optimaxes pulled her out of the turn and onto the plane amazingly quickly, never giving me the impression that she needed more power. Needless to say, the Nova Sportfishers with the 140, 150 and 200 motors made short work of the same trials with their additional power.

When my high-speed work was completed, I allowed the disgruntled crew to swim their konas as Sean and I climbed onto the flybridge to set a course for his favourite marlin spot.

I admit to having had negative thoughts about the flybridge, but retracted those quickly after spending a good few hours trolling every conceivable angle in what was not the nicest of seas. It was only directly into the sea that we found ourselves being swung around a bit too much, and by turning her bow a fraction she regained greater stability and a smoother ride. Sean spent two full days “up top” and also voiced his satisfaction.

Watching the lures for as long as I did showed not only how they worked outside the craft’s wake up to eight knots, but also how evenly the craft pulls the lures through the water. 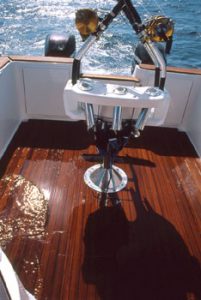 Why is this craft purported to be designed for marlin fishing? Where does she differ? Quite simply, the answer lies in the simplicity and extent of the cockpit or fish deck area. On the Nova Sportfisher this deck is free of any obstruction, allowing a very substantial Novas fighting chair to turn 360 degrees, as well as allowing for the deckies to work around the chair.

The gunnel sides are high — possibly the highest I’ve seen on any craft this size — and ideal to lean against and over when taking the trace of a big fish, as well as when gaffing or tagging.

On Brad’s craft he’s opted for a stripped teak timberwork for his deck and gunnel tops, which alone adds extensively to the craft’s aesthetics, besides being practical. This, together with the marlin door and substantial boarding platform extending out between the motors, I feel will make working this deck an absolute pleasure.

The siting of the Schaffer 18ft outriggers also allows the crew to run the lines more easily, especially in rough seas while being aided by the support afforded by the high gunnels.

Just in the shade on the port side at the entrance to the cabin area there’s a bait station. It has tackle stowage in its stern face, plus a freshwater wash-down makes for easy tackle make-up and bait preparation.

In the cabin area space is the keyword — there’s space for all the crew to get out of the sun. The skipper’s helm station is comfortable with a great captain’s chair and excellent view, as well as unrestricted access to all the instrumentation and gauges.

An upholstered seat on the port side between the bait station console and the front bulkhead allows some seating upfront for the crew not on rod-watch.

As the cabin is situated fairly far forward, there is not an enormous forward locker area, but enough space to store necessities and also big enough for a person to gain access to all the behind-dash mechanics and electrics.

Bou and his team at Novas Marine, headed by Willie van Jaarsveld, have done a magnificent job of the entire craft, but the detailed design and manufacture of the flybridge is especially outstanding. Not only does it work well, but the entire construction is made from special marine aluminium that is a lot lighter than stainless-steel and is coated to protect it from weathering.

The other exceptional aspect was not just the teak decking, but also the immaculate way it has been laid and caulked. 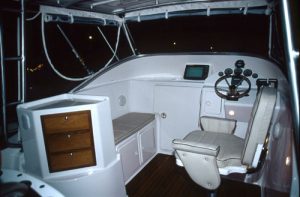 Readers will ask if she is only a marlin machine. No, says Bou. Take off the fighting chair and outriggers, fit an above-deck coffin hatch and a plumbed livebait well and you will have an ideal craft for light tackle or reef fishing — with all the benefits of the Nova Sportfisher as well.

Novas Marine have stuck to their design of total below-deck buoyancy without any below-deck hatches interfering with it. This makes the craft ideal for continuous mooring, as there is no possible way seawater or rainwater can fill the hull.

It’s a big call trying to adequately review four craft and do justice to all in the space allocated, so I am forced to say scrutinise the accompanying pictures, see how they ride the ocean and appreciate the niceties included in them. Then visit Novas Marine in Pretoria and experience for yourself what an outstanding craft the Nova Sportfisher really is.