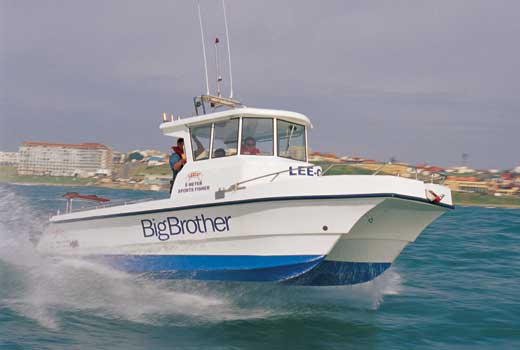 THE Lee brothers of Port Alfred — Carl, Leon and Joe — were on hand to meet me on my arrival at the East London Ski-Boat Club. Leon’s opening words were, “Welcome — come and look at the best value for money in the boating market today — our eight metre sportfisher.”

There she was at the top of the slipway, ready for launching, looking very big and powerful on her highspeed trailer in her blue and white livery.

Originally, it was our intention to undertake the test out of the Kowie River at Port Alfred, but with timing being critical and perpetual high winds, it was decided to play safe and use the protected slipway into the Buffalo River, East London’s harbour. This was just as well because the day before the review the north-easterly howled at over 35 knots which would have made exiting the Kowie impossible.

As it turned out, even though the north-easterly had subsided to about 15 knots, the bar between the piers at the entrance to East London harbour was not very nice at all. And the sea outside was terrible. Even though the wind was not that strong, the holes and chop from the previous day’s near galeforce winds made for an ugly and unpleasant sea.

Before reviewing the craft I should give you a short history about LeeCat Boat Builders. It is a very interesting history indeed, and it needs to be recorded because the company’s founder, Joe Lee — who passed on 18 months ago — was part of the history of our sport of angling, as well as offshore boating, and left a tradition for his three sons to uphold.

Joe was originally from Natal where he fished commercially off ski-boats from Zinkwazi and Blythedale Beach with the likes of Harry Lartz, Rusty Lavery and many others. It was during this time that he started dabbling in boat building, his best known craft being a 20ft 6in monohull with reverse strakes which he built in 1969. From that mould boats were built for Mike Brokensha and Tom Woodhouse, amongst others, who used them extensively for many, many years on the upper KZN north coast.

Joe moved to Port Alfred in 1975, and it wasn’t long before he began building boats once again. Only this time it was much bigger boats, and he moved from monohulls to cats in his design.
The first of the big boats I saw during a visit to Joe in the early ’80s was the upside-down hull of the 58ft craft that was to become the Royal Cat — a big ship belonging to Justin Steyn and Keith Wilmot, the men behind the development of the Royal Alfred Marina. This craft is now in the Caribbean, I believe.

Commercial boats, chokka boats, naval craft, harbour patrol vessels and police boats followed, in addition to a number of sportfishing craft such as Tag & Brag which was mentioned in ski-boat, September/October 2001. At the time it was being chartered out of Marlin Lodge in Moçambique.
“We have now expanded our range which includes the ten metre Fury and 14,5 metre Big Blue models to incorporate the LeeCat 8m Sportfisher which, by the way, is the smallest boat we have ever built,” said Leon. “It is proving very popular, being trailerable, reasonably priced and a good sea boat,” interjected Carl, who has used the boat extensively for tuna fishing off St Francis and Jeffrey’s Bay in the Eastern Cape. 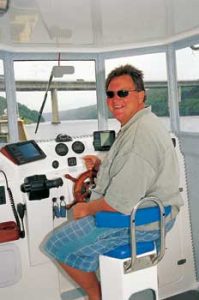 Before she was put in the water, I had a close inspection of the design of the sponsons as the reverse straking had caught my eye. “Yes, it’s true to the old man’s design,” said Carl. “We have incorporated it in all our boats. The additional deflection strake you so closely inspected does amazing things to the ride at speed, as well as keeping the spray wide of the hull and sent far aft.” I would note this with interest during the sea trials.

Eventually we were on the water. I boarded another craft to take photographs and watched her with interest as both boats headed down river and out to sea.

The LeeCat 8m Sportfisher was powered by twin 100hp Yamaha 4-stroke motors, controlled through the mechanical Morse binnacle throttle and gear controls which I found both positive and extremely smooth when I eventually got around to skippering her. The steering system was Sea Star hydraulic helm coupled to a Volvo Penta ram which was very efficient in use, but unfortunately did not allow the motors to swing from lock to lock. To achieve this it will be necessary to fit a different ram or linkage to allow the craft to execute much tighter turns and assist when manoeuvring at low speed.

During the photo session, Carl — at the controls of LeeCat 8 Sportfisher — really made the craft perform in the churned-up ocean, and I was intrigued at the way the hulls worked the water.
However, it was only when I got behind the wheel of the LeeCat 8 Sportfisher that I realised not only how many holes there were in the sea, but also to what extent speed compounded this messy water.

“She likes speed,” quipped Carl as I started to head up the coast with the wind and sea on my forward quarter. However, I am not a speed merchant and I was intending to work my way up the speed scale as I became accustomed to the craft and her ride. At the time I was riding at about 3 000 revs, which was giving me an SOG of about 12 knots, and although the hull was giving a soft ride, we seemed to be making heavy weather of the ride. 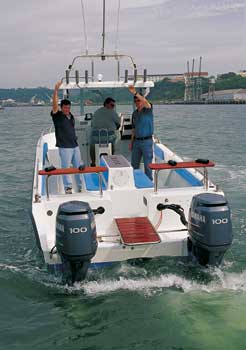 “Okay, boss, let’s try the heavy throttle and see if you are right,” I thought as I headed into the sea and moved the throttle lever forward. She was soon responding. As the rev counter reached 4 200rpm and the GPS showed 23/24 knots, we seemed to be flying from crest to crest. Whilst giving a surprisingly smooth ride, the craft was being thrown around, so I backed down to 3 900rpm. A slightly lower speed of 18/20 knots was good enough for me — we could all then relax and not hang on for dear life. Indeed, at that speed we could have run miles up the coast without breaking either ourselves or the boat.

Turning more towards the east, I ran with the sea on the port quarter as if we were running to the shelf and the copper steenbras grounds. She loved this almost side-on sea and we rode very comfortably at speeds up to 23/24 knots. Indeed, her ride was extremely soft.

On the way home, with the sea directly on the transom and the motors trimmed out a fair amount, I again opened her up in increments of 500 revs until we were really moving. After trying numerous different speeds at different trim settings, I found her “sweet spot” to be about 18/19 knots.

Any faster and the trims were overridden by the sheer weight (over a ton dry weight) and the length of the hull when overtaking the wave. As she settled into the trough the sponsons would dig deep into the water, almost acting as a brake. At 18 knots this did not happen.

I rode her for many miles in comfort at that speed to well south of the harbour’s Western Wall breakwater.
I had hoped that in this location I would find slightly flatter water — or at least a more even sea — for trials at various trolling speeds, but had no luck as the sea was equally bad. However, as one has to troll in all seas while fishing, the troll trials began.

At slow troll keeping her on track on one motor was not easy as there was just too much wind and sea. At rapala speed, and the 6/7 knots required for marlin lures, she proved fine under the prevailing weather conditions, allowing me to maintain course without too much PT on the helm. She threw a fair amount of water during this exercise, but fortunately we were well protected within the dodger cabin.
During a drift she lay side-on to the sea, and although we did not anchor, I gained the impression that she would have rode out the big chop without bucking to the extent of making fishing impractical.
Her performance on one motor with the other tilted was adequate. We achieved just over 10 knots, sufficient to get one home at a reasonable speed should the need arise. In fact, I was rather impressed, considering that the 100hp motor was pushing an eight metre craft and a crew of five.

Also impressive was the way the twin Yamahas got us out of the hole and running as we rounded Orient Pier, the eastern breakwater to the harbour, bouncing the oncoming surge, making a break around the breakwater to port, then running the swell line as we do at Sodwana.

The Lee brothers built this craft to be a practical sportfisher, laying out her deck and dodger cabin in a practical fashion, including the necessities but leaving out expensive frills and finishes.

“The eight metre Sportfisher has everything necessary to chase tuna 30 to 40 miles off our coast. If a prospective owner wants extras, we can customise to whatever is required,” said Leon. “We have tried to keep the costs of the craft down to a level that is affordable.”

The dodger cabin proved adequate in size for five of us. It certainly kept us dry and there were sufficient handholds for any long, ride back from the fishing grounds.

In the cabin the helm position is comfortable, and all instrumentation — as well as steering and controls — are conveniently situated. There is also adequate stowage and seating. 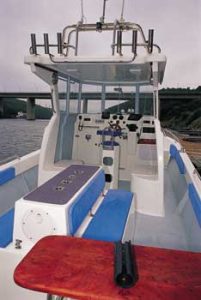 The deck fishing area is huge, allowing an angler to easily move around the cabin — even up to the bow — when harnessed into a big yellowfin. The centre aft deck fishbox is designed to be used either as shown in the accompanying photos, or bolted across the deck when trolling for tuna. On all seating the Lees have used closed-cell foam which does not hold water, is comfortable and is easily replaced at minimal cost if damaged.

Up forward the front of the cabin on both port and starboard sides has been concaved to allow an angler to lean into the cabin structure for support when connected to a big fish. One can see the designers have been tuna fishing in rough seas.

Also up forward are two big anchor hatches, and in the stepdown seat there are another two hatches that can be used either as additional fish hatches or as ordinary stowage.

And, what’s more, the rig is towable. Carl used his 3-litre 4×4 to pull her from Port Alfred to East London on a single axled “works” trailer. The trip took just under three hours, and that was straight into the 35 knot head wind. Not shabby at all for a craft of that size over 150km of some fairly steep road.

At a time when the demand for bigger and bigger craft is increasing and the cost of rigs not getting any cheaper, the LeeCat 8 Sportfisher may be just the craft you are looking for — a big boat at a reasonable price. Have a look, visit the factory and ride Big Brother yourself — you might be very pleased you did.