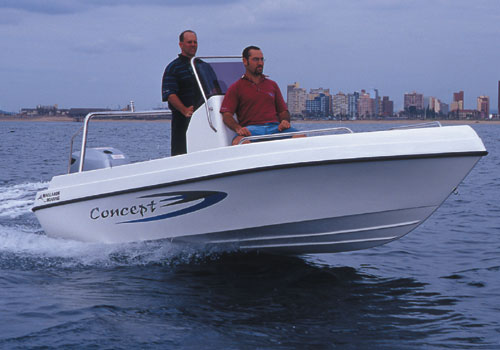 IT’S hard to believe I first tested this popular boat all of six years ago. As I was testing her this time around, the description — “boat for all seasons” — lodged in my mind. Imagine my surprise when I dug out the original review we carried in the March/April 1998 issue of SKI-BOAT and found that these were the exact words I used to commence that test report.

As Mike Barnes and I put the new Concept 16 through her paces, a lot of discussion centred around the versatility of this boat. In the remodelled craft, Mallards have incorporated new design and manufacturing techniques. However, they have also built into her features to meet a variety of recreational applications, since the previous Concept 16 has been used for bass fishing, flyfishing, waterskiing and wakeboarding, as well as inshore and offshore sportfishing.

GENERAL IMPRESSIONS
The impression I got when I saw her for the first time was, “It’s a completely new craft.” With the new styling of the top deck moulding and softening of her overall lines, Mallards have brought her into the 21st century. She now sports the more classic, rounded Mallards’ look that is so much part of their entire boating range.

She not only looks very striking, but also carries an appearance that will go down well when used amongst the flashy craft at a waterskiing venue.

CONDITIONS FOR TEST
With spring in the air — and unpredictable weather — it is generally difficult in our neck of the woods to set a date weeks in advance and hope for perfect boat-testing weather on the day. We almost got it right. Apart from a partially overcast sky — and a wind that was swinging from a strong south-westerly to a gusty south-easterly — the sea was relatively flat over a fair swell when the test began.

However, by the time I had finished playing with the new Concept 16, the south-easter had put a fair chop on the ocean’s surface.

These conditions suited me as, for all intents and purposes, this is a craft designed for fair weather offshore fishing. However, any craft that goes fishing offshore has to be able to take on the rough stuff, should the need arise.

LAUNCHING AND TRAILERING
The Swift trailer built by Mallards and especially designed for the Concept 16 is reasonably lightweight, yet sturdy enough for long distance towing and boat launching. In essence, Mike wanted a breakneck trailer that could be towed by a reasonably-sized sedan motor vehicle, thus enabling the young family man to maximise use of the Concept 16 on visits to dam, river, estuary or sea.

I watched from a distance as Mike and Roulie Sophilas from Power Boat World launched the craft into the shallow water at Vetche’s. While Roulie was parking his vehicle, Mike had the Concept 16 turned around and ready to proceed to sea.

On the retrieve, Mike and I loaded her with ease, thanks to a good vehicle, a Warn winch and a well-designed trailer. My job, apart from hooking on the winch cable to the boat, was to stand back and take photographs — a job even a wife and kids could assist with and not feel the strain. 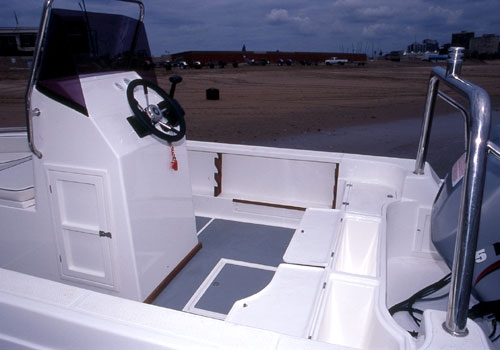 MOTOR AND CONTROLS
I took one look at the motor, a single 115hp Mariner Optimax, and questioned Mike’s sanity. “Why?” I asked.

“Simple. I had it in stock, and besides, the bass boys want speed, lots of speed.” It was a far cry from the twin 40hp motors that powered the original Concept I tested six years ago on its maiden voyage.

The Mariner Optimax 115 is not a light motor, yet I was to be quite surprised not only by the craft’s lateral stability at high speed, but also how high her transom was out of the water while on the drift during the test.

My preference for offshore work, even taking into account the new legislation about single motors, would be for twin 40 or 50hp motors, preferably with trim facilities. These, I believe, would provide this craft with all the performance and speed one would need for use at sea.

An hydraulic steering had been fitted to this boat and was nigh perfect during both high-speed and tight-turning manoeuvres. It was a pleasure to use. The throttle/gear control lever was also very well positioned, smooth yet decisive during operation where gradual power application was critical during high-speed runs.

HANDLING
During the photographing session aboard a Mallards 525, I was able to watch the Concept at close quarters, running alongside us and following us. Indeed, I found myself prejudging her performance even before I got aboard.

When I board and take control of the craft, I can then prove or disprove any assumptions I might have. Besides this, I then get a third chance to rate a boat — and that’s when I get back the 70-odd processed photographs and view them in detail on the light table.
Watch the throttle, I thought to myself once I had boarded the Concept 16, for I had noted the lightning-fast out-of-the-hole speed Mike was getting when parading her for the cameras. And I did, carefully — very carefully — until I really got the feel of this high-spirited thoroughbred. 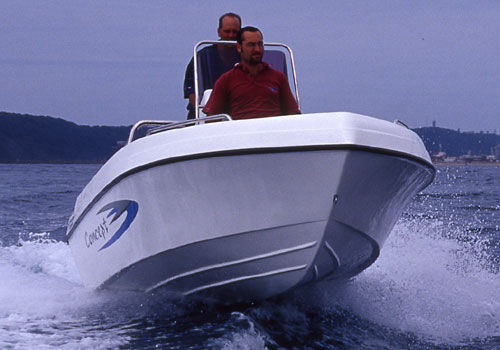 My first run at moderate speed with the wind on the transom had me setting the rev counter at 3 000 rpm which gave me an SOG of about 20 knots. Trimming her nose up ever so slightly, I reached a trim setting that gave her a ride that had the Concept 16 literally gliding over the water’s surface. By increasing or decreasing the wetted area by adjusting the trim, I could get her ride to deteriorate. I also noticed a drop of 500 revs on the same throttle setting when increasing or decreasing her trim over what I call her “sweet spot”.

During this ride, especially with the small following sea that was running, I was very conscious of her lateral stability. Logically, with a centrally mounted motor and the torque generated by it, it should, by rights, have had a strong tendency to lean into the torque. I did not experience this tendency, either with a following sea and into a head sea, or in a high speed run in relatively flat water.

This gave me a lot of confidence in the Concept 16, especially when it came to tight turns and out-of-the-hole pull-out into and over an oncoming swell, She passed both tests with ease.

A run into the building south-easterly sea had me initially trimming her bow-up and down a number of times, until I got her riding very smoothly. As I said to Mike — in fact, I showed him — the slightest touch of the trim button either up or down from its optimal position got her to either pound as her bow lifted or snake as her bow pushed into the water.
Running with a chop on her beam, she was able to cope reasonably well, yet in a big wave — as she ran with the wake of the bigger 525 — she tended to be pushed off course quite seriously.

During a lot of slow troll and lure trolling speeds, I found her positive in direction and not overly affected by lateral wave movement. Above all, in the small sea and a wind of between seven and ten knots, she didn’t throw any spray over the gunnels, nor was any spray wind-driven over us.

In modifying the design of this craft, Mike has used a lot of foam as buoyancy, raised the deck level and redesigned the motor well. This has resulted in a lighter craft that floats higher in the water. Even with the heavy Mariner 115 on her transom and both of us standing aft, she took no water through the scuppers, nor did the motor appear to be lying too deep in the water.

At high speed she was awesome. Mike has clocked her at over 100 kph. I wasn’t that adventurous. With a possible 6 000 rpm, I did not take her over 5 000 rpm. That was fast enough for me, and her hull was virtually entirely out of the water, riding on minimal aft transom planning area of her hull. During this high-speed run, her lateral stability really impressed me.

For the average boater this power is excessive, and I would personally run a single 75hp – 90hp motor, or twin 40s or 50s. 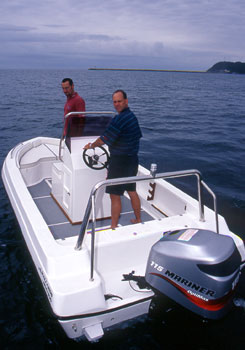 DECK LAYOUT
It is in this area that Mike has excelled with the redesign of the singly-moulded top deck. Not only has he changed the entire look of the craft, but he has also accomplished his original objective — making her a truly appealing boat for all seasons.

Looks are as important as practical application when one is appealing to the wide spectrum of user groups Mike is aiming at. For the serious bass fisherman, two under-deck hatches can be used as live fish wells, or the offshore/estuary angler can use them as livebait and fish holds respectively. For the leisure boater or waterskiing enthusiast, one hold fitted with ice, cool drinks and beer would be a good call.

The front deck is large and raised with an upholstered sun bed. A forward single-post swivel seat is supplied for the bass angler to use as a casting seat. Space has also been provided for the installation of an electric trolling motor.

Behind the well-styled centre console is good sized fishing area with a roll bar over the transom onto which rod holders can be fitted for the angler who uses the craft for trolling. A centre bollard has been fitted to this substantial roll bar to facilitate the towing of waterskiers and water toys. In the transom area of the motor well, three wet hatches are provided that have multiple uses.

To make this craft user-friendly for the flyfishing fraternity, the deck and inner gunnel areas are finished off so that there are minimal line snags in the area where two flyfishers would be casting and stripping fly-lines. A very neat, recessed rod rack has been provided on each side of the craft. The tip section of light rods can be run into the protection of the bow area of the craft.

A smart and efficient non-slip surface has been incorporated into the moulding of the deck and gunnel tops. 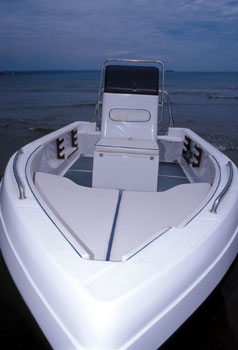 FINISH
Even though the craft I tested was the first off the production line, she was immaculately finished. Mike was at pains to tell me that subsequent craft presently being completed had this or that minor improvement, but I was completely satisfied with what I saw.

Mallards have a reputation for excellence, and I listened to Mike and acknowledged his desire for the Concept 16 to be perfect. It’s his fanaticism — rectifying minute imperfections — that lays the foundation for the immaculate finish of all the Mallards craft that leave their factory.

The introduction of foam into the longitudinal areas of the craft has had the effect of quietening down hull-over-water noise, a factor Mike says has come through very noticeably, especially in their range of waterskiing craft. New buoyancy regulations have necessitated this move, and the benefits stretch further than just keeping a craft afloat if an accident occurs.

CONCLUSION
In this day and age, with quality family fun time together becoming more and more important, a craft such as the Concept 16 will provide many with the means to enjoy themselves on the water, be it dam, river, estuary or sea.

Yet for the serious bass angler, flyfisher or light-tackle offshore angler, this boat will provide everything they require to pursue their sport.