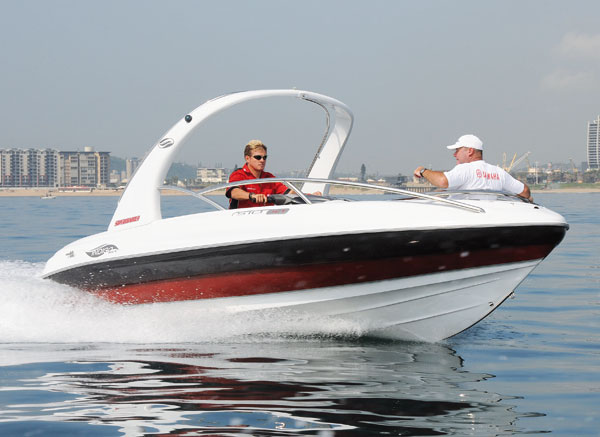 THIS is another craft I’d been dying to get my hands on after all I’d heard about her.
If I told you, say, over the phone that this is a jetski that’s a boat, what would your mind conjure up? In a word, I thought “innovation”, and finally I got my chance to ride her.

The first time I saw one of these funny looking boats was at the Johannesburg International Boat Show. I hung around her for a while and inspected all the fittings and holes I could find. I certainly wasn’t the only one who was intrigued by this craft, and I liked what I saw.
In a nutshell, what they’ve done is take a normal four-stroke Yamaha jetski, cut off some of the edges and other pieces, and build a boat around it. Very nifty. She’s ideal for one person who wants a little more space than a jetski offers, but still wants to handle the craft on their own. The other advantage is that although she is small, two people could comfortably fish aboard her.
She is built for Yamaha by Indigo Boats who are doing a sterling job. 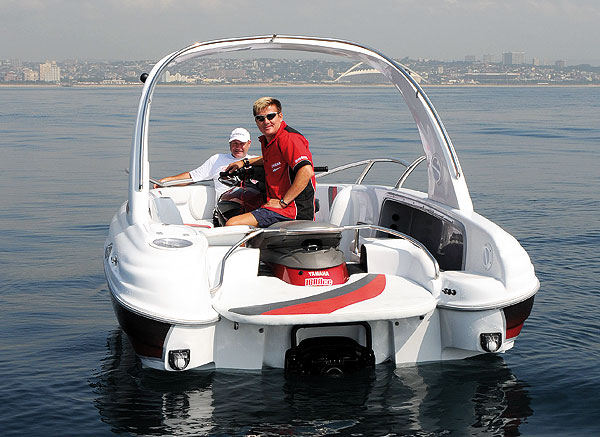 I went up to Yamaha in Pinetown to collect the craft and tow her down to Durban Ski-Boat Club where I met up with Ryan Hansen from Durban Yamaha and Shaun Lavery from Yamaha.
The boat we tested was the 510 Jet Boat. I’d been hoping to try out the 430 Jet Boat that is fitted with the Yamaha 1 100cc four-stroke jetski, but unfortunately she had been sold and was on her way to Standerton.
The 510 Jet Boat should look big for a 5.1m craft, but she tows very easily, and if you’re not concentrating you tend to forget that she is behind the car. While towing she felt exactly the same as when I’m pulling my normal Yamaha 1 600cc jetski.
Down at the beach I went straight onto the sand without even deflating my tyres. After dropping her on the beach a little bit short, it took four of us to push her deeper into the water, but once afloat I handled her with ease. When we hit the beach on the return she did lean to the left, but that’s normal with any deep-vee craft or jetski and something you just have to get used to.
Loading her was also easy using just the hand winch, but it could be made much simpler if you fitted a small electric winch on the front of the trailer like we do with our jetskis. Taking her off the beach I had to put my vehicle in 4×4 mode to gain a little speed and traction, but bear in mind that I didn’t deflate my tyres.

The ocean was so smooth that could well have been testing her on a dam. The sea was like a mirror with a tiny swell every now and then. The only way to put her through her paces on “active” water was to create our own swell with the photography boat. 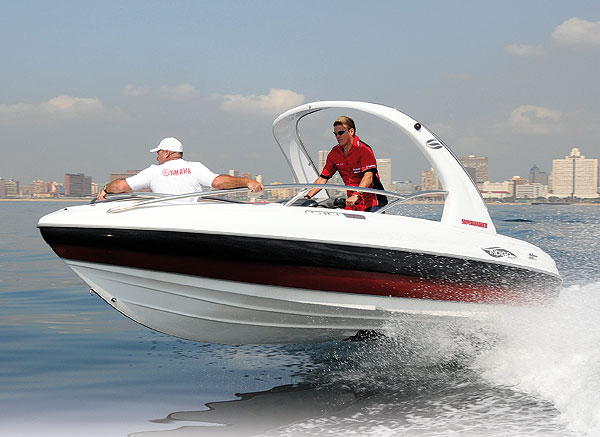 I spend a great deal of time fishing off a jetski so I had an idea of how this craft would be on the water, but I still had no idea how she would react when turning, remembering that this is now a boat, not a jetski. What would happen when I opened the taps? Well, I managed to get all these answers.
Erwin Bursik was on the boat with me and I did warn him to hold on tight, because neither of us knew what to expect. I have to mention that after the first fast turn when the boat spun out just like a jetski, the expression on his face was priceless.
I had her going at around 30km/h and took a sharp turn to the left while accelerating. She did just what a jetski would do and spun around. After I stopped chuckling at Erwin, the pull-away was just as fast. Then the game was on to see what else she could do. First a left turn then a right turn, then pull out of the turn onto a straight run at full speed, then swing around again to see how quickly she could get back up to speed.
People who have never been on a jetskis have no idea of the power behind their engines. They go from stationary to 60km/h in less than two seconds. These supercharged Yamaha engines are just amazing — they have power like nothing I’ve felt before.
I handed the steering over to Erwin, and as a first-timer handling a jetski there were a few things he had to get used to. For instance, let’s take the steering … If you’re going straight you have to keep the accelerator going all the time, without letting go when turning. If you do let go she’ll either waver to left or right or keep on going straight. It sounds complicated but it’s not. After about five minutes Erwin was handling the Jet Boat like a pro.
In essence, the Jet Boat’s handling capabilities are much the same as the normal jetskis that we use for fishing. The huge difference is that there is much more space available on this craft as well as on her smaller sister, the 430 Jet Boat.
The Jet Boat is very stable when you travel at a constant speed, even with one person standing or sitting on the side seat. At slow speeds she’s just as stable and doesn’t tend to lean at all. One huge plus is that she also has a reverse gear like any outboard engine. At slow trolling speed she is very stable and her high gunnels are comfortable to lean against, adding to the feeling of safety while moving around on the boat.
There is some cavitation due to the amount of power she puts out, but that can be easily overcome by playing with your accelerator. This mostly happens if you have turned too sharply while accelerating.
Out the hole this boat is incredibly fast and I think you would get out of trouble much faster in the surf than on a conventional ski-boat with outboards. Just to get an idea of how stable she is and the power she has, I used her as a photography boat to take pictures of the Yamaha Seacat 636 that I was also testing, featured elsewhere in this issue. She handled the extra weight with ease when I put four people on the Jet Boat during the photo session, and we were all impressed at how fast she moved. 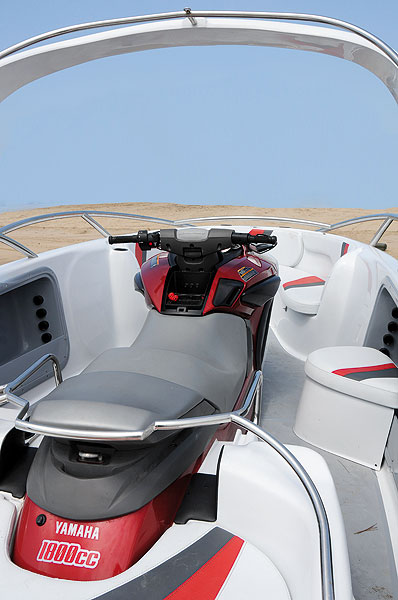 I could not fault the layout and finish on the Jet Boat.
She has a removable platform at the stern for someone to sit on or to climb out of the water when skiing or wakeboarding on a dam. On the port side she has a livebait well that could also be used for a cooler box. Because she’s designed around a three-seater jetski, there’s one seat right next to the skipper on the back left, and another on the right side just a little to the front of the skipper.
Rod holders have been fitted into the gunnels of the boat and she has a wet deck so that if water does come on to the deck it just drains off the back. On the deck in front of the jetski there’s a storage compartment that could be used as a fish hatch. Then, in the front on both sides there are comfortable seats with some more storage space underneath them.
In the front she has a self-draining anchor hatch that is easily reachable.
This boat’s layout is especially spacious and comfortable. At the stern, going over the skipper’s head, she has an arch that’s fitted with night lights as well as stainless grips where you can attach the ski rope when skiing. 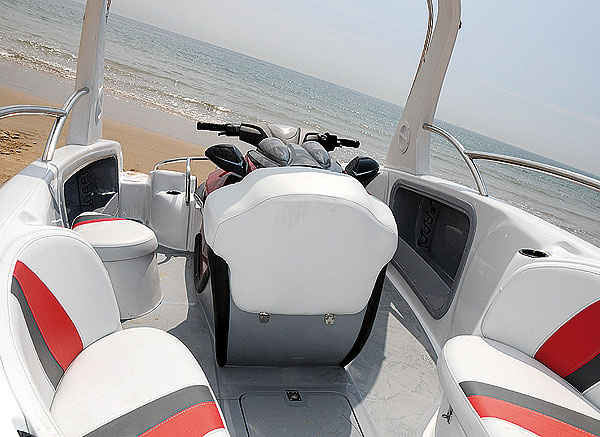 Yamaha has really pulled the proverbial rabbit out of the hat with this innovative craft, one of the most user-friendly, all-rounder boats on the market today. I know she won’t suit everybody’s needs or tastes, but believe me when I say that if you want a boat that you can use for the family at the dam, then convert her for a serious day’s fishing out at sea, you would have to search long and hard to find a better all-rounder than Yamaha’s Jet Boat. She deserves a good look.
When it comes to fuel consumption, I reckon it’s the same if not lighter than two outboards of the same size, depending on the application you use her for.
Is she really suitable for waterskiing? Yes — in fact, I have found that it’s easier to pull a tube with a jetski than it is with a boat. And yes, she is classified as a fishing vessel when she’s rigged with fishing tackle and safety equipment.
One word of warning — although she handles a lot like a jetski, make sure you get used to her before you try any funny tricks!