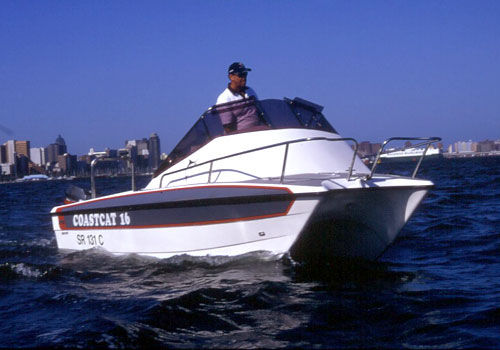 The CoastCat 16 has been a favourite of the South African deep sea fraternity for a good number of years now, and Waterworld, one of the major boating companies in South Africa, has promoted this craft as a house brand for the last 14 years, achieving tremendous success with it.

As a result of a recent redesign of the craft, Waterworld CEO Ronnie Arenson asked me to retest the CoastCat 16 and compare this review with the test we carried in the November/December 1991 issue of SKI-BOAT.

GENERAL IMPRESSION
When Tony Lindhorst arrived in Durban with the new CoastCat 16, my first impression was that I was looking at a totally new craft. However, on closer inspection it was revealed that the basic, well-proven hull had largely been retained. The major changes had been made above the waterline and in the craft’s interior.

In addition, Tony had in tow the Viking Wakester, a single-engine speedboat with a wetdeck and seaworthiness that allows this craft to be passed for limited offshore use. This was to be our photo boat and would also allow me to see how well this speedboat handled open sea conditions.

CONDITIONS FOR TEST
The beastly easterly beat us! By the time we were ready to launch, the easterly was really pumping. To launch two craft into it would have been plain stupid, so we had to resort to using Durban Bay as our test arena.

LAUNCHING AND TRAILERING
Waterworld use a CoastCat trailer which has proved itself over many years — both on the road as well as on the beach.

I obviously had to launch her from the slip into the Bay, but enjoyed the experience. Not only did my feet stay dry, but the craft slipped off with ease, and — later — back onto the trailer just as easily, even with the strong side wind.

I believe it’s necessary to occasionally launch a craft from a slip as it reminds one of the rigours one’s vehicle, boat and trailer have to endure when beach launching. 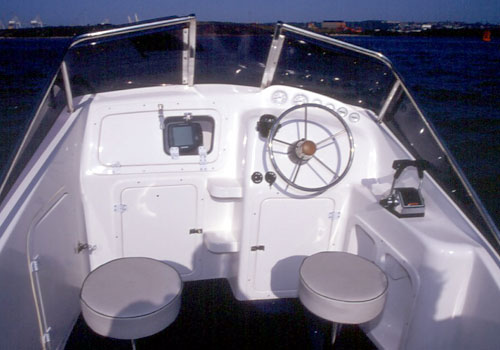 MOTOR AND CONTROLS
The craft reviewed was powered by twin 60hp Mariner trim-tilt motors. The craft’s batteries had been stolen en route to Durban, but fortunately Tony managed to get replacements and had them up and running by the time of the test.

Fitted with 17” pitch props, the 60hp Mariners pushed the craft out the hole with good speed, thus maximising the initial torque these motors provide. Once on the plane, her reaction to increased power through the range — until maximum throttle — had the craft showing very fast speeds, topping out at over 30 knots in the choppy water of the bay.

With the new helm station layout, an allowance has been made for binnacle mount controls to be used — in this case, Quicksilver. They were convenient, positive and nice to use. The hydraulic Sea Star steering system used was smooth and had good lock to lock turn capabilities. 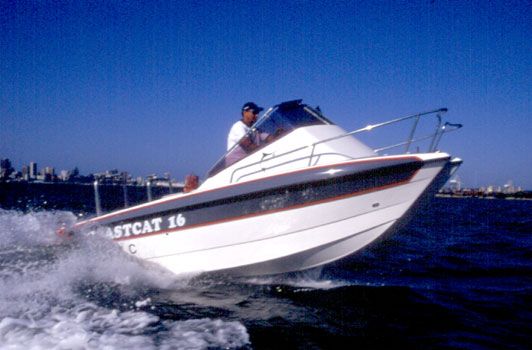 HANDLING
I do not like testing a craft in what I call the lifeless water of Durban Bay — or any protected water, for that matter — as it lacks the lift provided by the swell one experiences at sea.

However, due to time and weather constraints, and the fact that the hull of the CoastCat 16 — the surface area that reacts with the water — was to all intents and purposes identical to the craft I had already tested, I felt justified in reverting to the conclusion I came to during that previous test.

“In the flat water off Vetch’s, I was able to throw her into very tight turns both to port and starboard and was immediately impressed with the way she went into and then came out of the turn.

“A small cresting swell was coming over Limestone Reef and I was able to judge her turning ability in front of oncoming waves at the speed one would normally encounter during a surf operation. I was quite satisfied with her performance when we had to crash through the odd wave which was starting to break at the crest. During this trial — and also when we played with some big sets around Cave Rock — she landed relatively softly.”

I re-assessed the turning ability of the CoastCat 16 in the very choppy water and confirmed her performance in this area. In fact, she seemed to turn better and with less cavitation than I remembered from the previous test. Whether this was because of the enhanced torque provided by this latest generation motor or the hydraulic steering and binnacle mounted controls, I can’t say

“As the sea gets bigger, one assesses the point at which the craft’s practical limitations are reached. After this point I believe the craft is being pushed to the extreme — and such conditions should only be encountered in times of duress, such as when fighting one’s way home in the face of very heavy winds.

“This small craft came through the test with flying colours for, as we moved into progressively heavier seas, I found her able to take it without pounding too heavily or throwing water all over us every time we went over one swell and hit another.

“I must admit that the ability to trim the craft under these conditions helped a lot.”

Back in the bay, I found that this hull reacts very quickly to trim adjustment of the motors, confirming her ability to handle varying sea conditions.

As a major consideration when judging the important handling aspect of the craft, it is fair to say the positioning of the helm station and its user-friendliness to the skipper plays a major role in assessing the craft’s performance at sea.

With the re-design, which I will elaborate on in greater detail later, I got the feeling that this craft was, in fact, producing a better ride at speed. She gave me the feeling that there was more boat around me due to the improved top deck design, thus providing me with a greater sense of protection throughout the test.

FINISH
In this department craft manufacturers are endeavouring to produce finishes that turn the “skuit” of yesteryear into the fine craft available to ski-boaters today.

From Waterworld’s position as a leader in this market, they cannot afford to pass off anything that is not up to scratch. It is with this in mind that the craft has been redesigned,and at the top of the ageda they have placed practicality, aesthetics and substantial finishes.

I would go so far as to say that, overall, the new craft offers a lot more than its predecessor did. 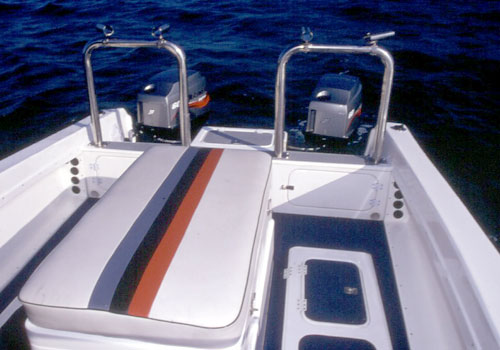 DECK LAYOUT
As this was, in essence, a retest of an established design, my attention was directed largely to the changes in design of the superstructure and deck layout of the new CoastCat 16.

Firstly, her aesthetics and overall appearance have changed, making her more striking in appearance and giving the impression that she is larger than she actually is.

It is, however, in the internal design of the helm station, the forward console section and the deck layout that major changes have been instituted. These changes have, I believe, not only enhanced her looks, but have also made her much more user-friendly and comfortable for the skipper and crew.

The helm station, which includes binnacle mounted controls and a high windscreen, offers the skipper a lot more protection, as well as acomfortable position for the steering and controls. Forward and side cupboards are well positioned and are easy and practical to access, even in rough seas.

The round “bar stool” seats used are comfortable when one is seated and practical to lean against whilst travelling, but lack the backrest required perhaps during periods of waiting for a strike to happen.

Gunnel tops and the inside gunnel sides are neat and have rod racks as well as a forward cupboard moulded into them. A carpeted deck and a full transom incorporating motor-wells finish off the craft very nicely.

Finally, the above-deck fuel and stowage hatch is well positioned to allow plenty of fishing area around it, as well as an upholstered top to sit on.

CONCLUSION
The CoastCat 16 carries with it the backing of Waterworld which — combined with its long history of favour within the ski-boating fraternity — will make this a popular inshore fishing craft.

Her size, weight and towability also make her an attractive proposition for the offshore angler who intends towing his craft to the fish-rich areas of Moçambique.