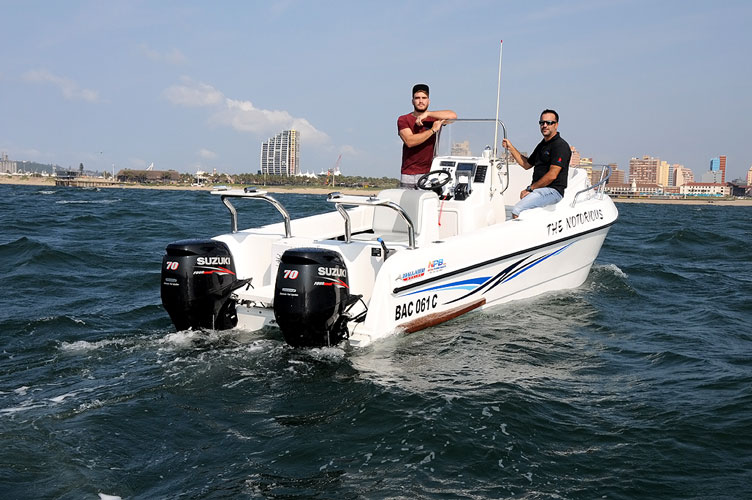 MEETING up with the Cobra Cat 525 centre console at the Rod and Reel Club slipway on the designated day for the review was much like meeting up with an old friend. I was filled with anticipation, a degree of nostalgia, excitement and a feeling of “I wonder what changes time has added to the memory of the past?”
Nick Landzanakis of Natal Power Boats arrived towing this beautifully presented craft on its high speed trailer together with its owner, Dale Chadwick — a Sharks player who had just returned from Argentina where they’d beaten the Jaguares.
Only when I boarded the craft did I realize it wasn’t straight out of the box but had already been taken out to sea by Dale (pictured below) and his team mates a few times. No doubt land sharks versus ocean sharks!
All credit to Dale, the craft was immaculate, proving that there is a softer side to Dale than the one we witness when he is on the rugby field. His “baby” is very tenderly cared for. 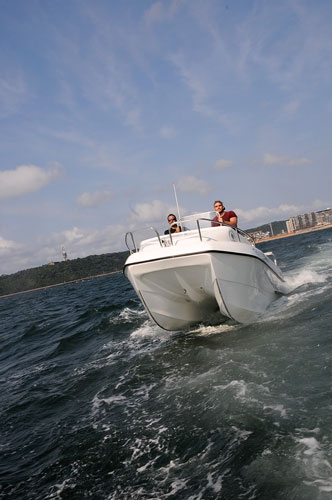 GENERAL IMPRESSIONS
As I said earlier, the Cobra 525 is not new to me, but the centre console version was. I do not recollect ever seeing one, even on the water while out fishing, so I allowed my eyes to feast on all the aspects I hadn’t seen before.
In profile she is an extremely streamlined craft and the conformity of her top deck bow area running aft to a full transom with the centre console blends in well with these sleek lines.
When I first saw the boat she had no windscreen because the console windscreen can be easily dismantled for easier towing and to enable Dale to reverse the craft into his garage at home. When Nick fitted the windscreen before we set out to sea it immediately added to the craft’s overall appearance.
I was very excited to get the craft onto the water and to figure out if there were any differences in the overall ride and comfort of the centre console as opposed to the Cobra 525 forward console that I know so well.

CONDITIONS FOR TEST
With time constraints on my side, Nick preparing for a trip to Japan and Dale’s Sharks’ commitments, we had only one day to do this review.
After the previous day’s beautiful sea we launched into a north-easter that was predicted to blow at up to 40 knots. Indeed that’s what it did — the strongest north-easter we have experienced this year. The wind was just starting to blow as I exited Durban harbour, and it continued to strengthen as the review progressed, to the point where it was an ugly sea with a lot of chop over a moderate swell — not ideal conditions for a boat review, but the Cobra 525 came through it with flying colours.

LAUNCHING AND TRAILERING
Having previously towed a Cobra 525 forward console on a Swift single axle trailer and, as they say, “enjoyed the ride”, I have no reason to believe that this centre console version with a lot less wind resistance should not be even easier to tow.
I didn’t get to tow her myself because Nick had towed the rig to the Rod and Reel Club slip, but I questioned Dale about his towing experiences. He tows his craft with an older model Landrover and says that he has no problem and hardly feels the difference when towing her from his home in Mount Edgecombe to where he launches at Bluff Yacht Club.
The Swift Trailer on which the Cobra 525 was being towed has proved itself more than equal to the task. This model of trailer has been around for the last 16 years since the Cobra 525 was first manufactured and has carried these boats all over the country and to Moçambique, launching them

from beaches and slipways with no problem.
The sub-chassis of the Swift Trailer can be adjustable longitudinally by simply unbolting it, sliding it to a different position and then re-bolting. Dale says that initially he found that the rig snaked a tad, but since the sub-chassis was moved aft a bit it’s perfect even at high speed. 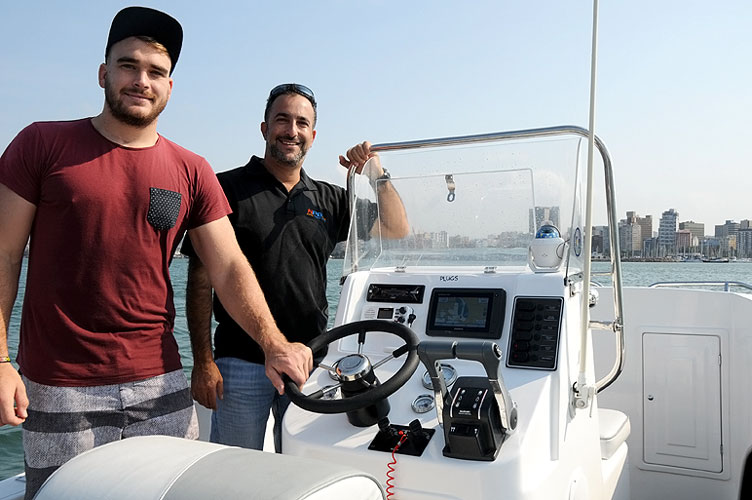 MOTORS AND CONTROLS
Dale has chosen twin 70hp Suzuki four-stroke motors to power his craft and he is delighted with them.
It was my first experience with those specific motors, and after listening to Dale I was eager to get out and see how they performed in the demanding performances I put them through.
The Suzuki 70hp four-stroke motors spinning 17-pitch, three-bladed aluminium props performed beautifully, as you’ll gather when you read further.
Even though I found the throttle controls a tad stiff while manoeuvring, the motors themselves never missed a beat and were very responsive, providing instant power against immense load on the props when I pulled her out of an extremely tight turn and floored the throttles.
Only once, when I had her incorrectly trimmed for such an exercise, did the port motor cavitate, the rest of the hours we spent at sea there was no cavitation.

HANDLING
I have some very fond memories of the Cobra Cat 525 in its original forward console configuration and the numerous days I’ve spent fishing on those craft, and I was extremely curious about how I would find this centre console model.
After leaving the no-wake zone I trimmed in both motors and started to push forward on the twin throttles of the 70hp Suzukis. As I felt the 17-pitch props bite and the Cobra 525 coming onto the plane I began experimenting with the power trims to establish not only when and how she got onto the plane, but also how I could control her lateral stability and attack stance.The flat bay water enabled me to get

acquainted with her ride and crew positioning before we faced the rough stuff I knew was waiting for us out at sea. Once we were out in the open I would be unable to play with unrealistic trim positions and had to figure out how the craft would react to these trims under reasonable sea conditions. 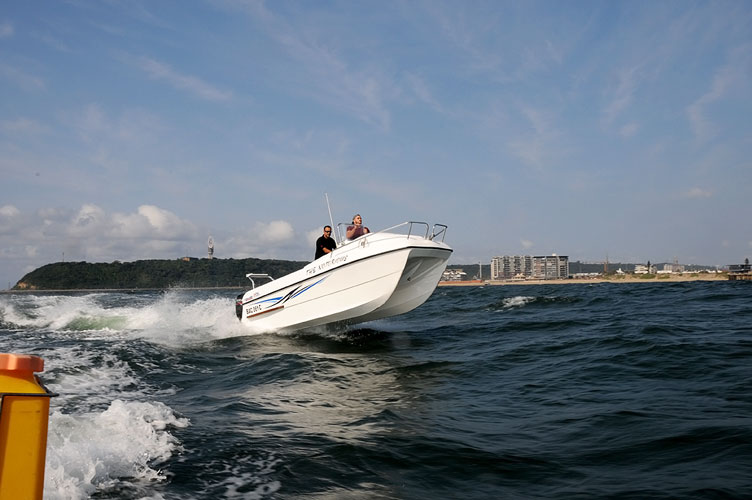 I soon established the difference between this craft and the forward console version I have become so accustomed to. Whilst this model is very fast out of the starting blocks, she has to be controlled more carefully than the forward console version, especially if the crew — in our case “substantial crew” — are standing at or behind the helm station. Dale and Nick, both experienced boaters, instinctively moved into position during numerous trials ensuring that their positioning enhanced the ride and performance of the craft.During my extensive runs both in beam seas and a following sea, I was able to maintain a comfortable 17 to 19 knots which surprised me in the mushy sea conditions. Furthermore, we all remained surprisingly dry. Running directly into the north-east at a slightly lower speed but still on the plane, I was able to trim up her bow marginally to hold speed and minimise the over crest jumping and slamming so often experienced when facing a head sea.The sea was standing up over Limestone Reef, enabling me to seriously test her tight turning ability to both port and starboard. More importantly, I was also able to test how quickly she was able to pull out of the turn and dig herself out of a hole and face whatever was approaching us.Testing her takeoff after holding in semi-sheltered water off Vetch’s, bouncing a foamy and then powering out in front of a starboard side oncoming wave proved very interesting. Holding position in the strong wind and chop with a relatively small craft was a little difficult, but once a decision was made to get up and go she was electric. She stabilised quickly after an initial jump and achieved a good speed to get over the shoulder of the approaching swell.
The last relatively high speed test was in a big following sea. With the crew well aft, she rode it beautifully and I felt I had full control even when racing down the face of a big following cresting swell.
Under fishing conditions — low speed and lure trolling speed as well as drifting — she felt stable and was relatively dry. The seas we had were certainly not conducive to fishing, but we tried all the same!
In the flat water of the harbour I tried her with one motor, the other tilted up, and got her to plane and maintain that speed by shuffling the crew towards the bow. 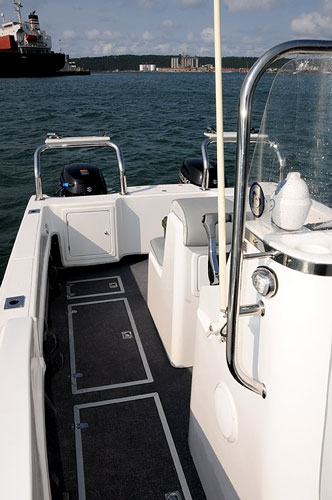 DECK LAYOUT
It is obvious that an enormous amount of thought has gone into the deck layout and centre console configuration of this Cobra 525. The aft section is very similar to the first 525 I tested in 2000, with the full transom containing accessible above-deck battery hatches and a livebait well. An addition in the starboard transom is a luna tube for “jub-jub” sized bonnies.
It is, of course, the centre console on this craft that is of prime importance — its situation, its size and its ability to afford the skipper a comfortable stance with easy access to all his instrumentation, steering and throttles. I liked it and did not feel that I was restricted despite having Dale on one side and Nick on the other.
The walk-around was sufficiently wide enough to allow even us big guys to move freely from the bow area to fish deck without hindrance.

FINISH
I raved about the finish of the Cobra 525 I reviewed in 2000 and, if possible, the top deck finishes and hardware are now even better than before.
The new style of manufacturing boats without using any wood in the entire construction necessitates high quality moulds and superior laminate construction. This certainly shows, with another benefit being that the completed craft is at least 80kg lighter.

CONCLUSION
I have been enamoured with the Cobra 525 since my original review and I am more than happy to say my morning aboard Dale’s craft in horrendous seas has only led me to conclude that this craft is indeed one of the best of this category of ski-boats manufactured in South Africa.