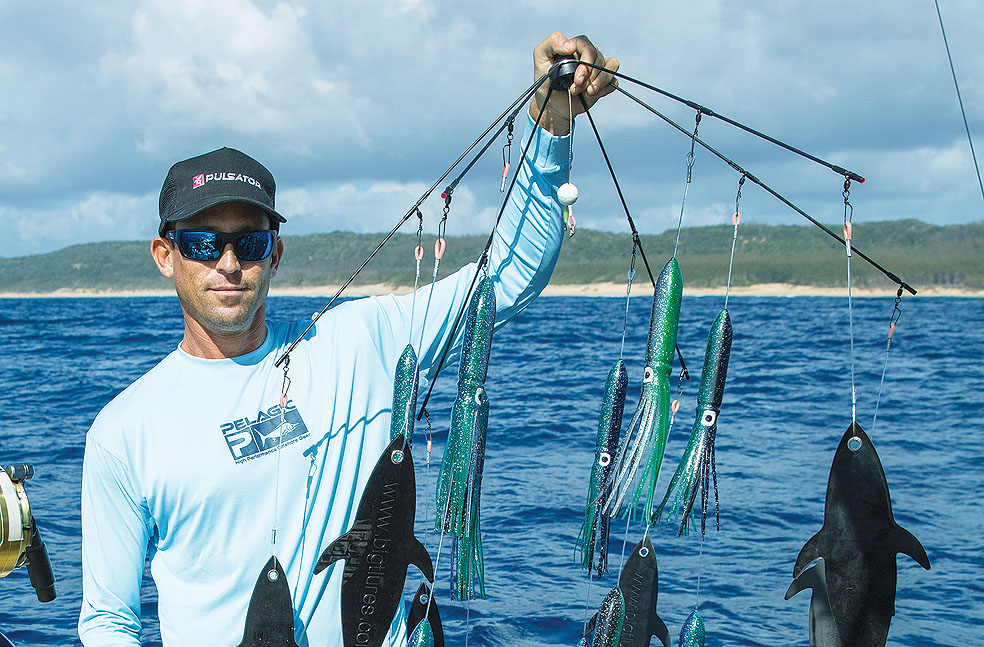 (Published in the January 2018 issue of Ski-Boat magazine)

I RECENTLY arrived back in my home town of Durban after a great season’s ﬁshing in Kenya, Cape Verde and Morocco during 2017. On my arrival I met up with Erwin Bursik and we got talking about ﬁshing. The subject of teasers came up and we began discussing which was the most successful lure or teaser and what method had worked best for us last year.
You cannot hook a ﬁsh unless you have its attention ﬁrst, and understanding how to tease ﬁsh in the offshore world is a necessary precursor to success. But mastering teasing tactics is only a small part of the science.
It’s very important to understand the actual teasers themselves. Over the years lure manufacturers and ﬁshermen have developed several different types of lures and teasers and each teaser/lure plays an important role in an angler’s arsenal.
While single, hookless, natural baits and lures are often used effectively as offshore teasers, the most common type of teaser used in the boating world is the daisy chain. This is created by having a line of soft plastic squids grouped together with an equal spacing between each squid, rigged onto 300- or 400 lb monoﬁlament which often stretches to nine- or 12 feet long.
This teaser runs between wake number one and wake number two, typically with a softie trailing behind, skipping and splashing seductively in the boat’s wake. Sometimes they draw ﬁsh close to the boat, giving the angler a better chance at hooking the ﬁsh.
When it comes to running these kind of teasers on a ski-boat, the white water from the boat and engines often disguises what you are trying to achieve especially when the sea is slightly choppy or unfavourable on the day.
There is a big secret behind all of this and it was not invented yesterday, but actually way before most of us even started ﬁshing.

THE DREDGE
Everyone knows about the dredge but hardly anyone uses it in southern- and east African waters.
Dredges are basically clusters of plastic squids or natural baits designed to mimic a bait ball. They are generally slow trolled below the water’s surface, and are typically held down by a downrigger.
Dredges have become very popular again in recent times, especially in some of the mid-Atlantic billﬁsheries for blue marlin. The dredge was ﬁrst designed to attract sailﬁsh off the bait balls in Miami, Florida, and there are many ways of rigging them, from using natural baits to bulb squids and mud-ﬂaps.
The good news for South African fishermen is that we don’t need to stock up on natural baits and go through the tedious efforts that Florida ﬁshermen have to to rig their dredges with natural baits. Although I respect the crews that do that, all we are trying to do is get the marlin to come to the closest lure/teaser in our spread.
Since I started running a dredge in my spread (bulb-squids and mud-ﬂaps) I have noticed a turn around in the way the ﬁsh behave behind my boat. This has changed our strategy in ﬁshing for billﬁsh.

POSITION
You may well be surprised at how close we run the dredge behind the boat. It needs to be trolled completely submerged with no skipping or tumbling, and I also like to ﬁsh it where I can see it. Unfortunately this is a little more difﬁcult on a ski-boat if there’s only a low platform and no ﬂy-bridge. In that case run it as it disappears, with an added one metre of line once it’s out of sight.
If I had to pick a general spot where I like the dredge to run, it would be somewhere between the ﬁrst and second waves. The skipper needs to have sight of the downrigged line at all times, so it depends on where your helm is; if you’re steering from the port side run your dredge on the port, and the same goes for the starboard side. You can run it ﬂat out the back of your boat, but the preferred method is to run your roller off your riggers to give you more clearance and better sight of where your dredge is.
Statically I would say 70% of the blue marlin that we have raised came behind the dredge. I don’t believe that it raises you more ﬁsh, but I do believe it entices an inquisitive billﬁsh to come in and have a look at the “bait ball” you have created.
You have now achieved the ﬁrst goal — bringing that ﬁsh right behind your boat where your short teaser/lure is instead of having it swimming through your spread while it chooses whichever lure is performing the most. In that scenario quite often they will go for your long lures because they’re at a better surface angle or else the ﬁsh fades away without you knowing that it was there in the ﬁrst place.
The ﬁsh is generally enticed to attack the lure closest to the dredge, giving the angler a much higher strike rate. Instead of the ﬁsh having a shot at the longs, you have convinced it to come in short to have a look at your artiﬁcial bait ball.
A dredge swims very simply under the water, almost in a hypnotic way, creating no aggression at all, but it’s a very visual indicator to a billﬁsh. Marlin often lose interest quite quickly after they’ve had a look at the “bait ball”, but as it fades off the dredge it will notice your lure behind the dredge. That lure will be behaving in a completely different manner to the dredge which ﬁrst lured the ﬁsh in, and with your lure positioned in the right place — smoking and acting like a smaller baitﬁsh feeding on the surface — you will get a much more aggressive bite. You will soon notice that you raise more ﬁsh to your shorts when you use a dredge as opposed to running without one.
I understand that we fish on smaller boats in South Africa, but this does not mean that you cannot run a dredge. My advice is to rather leave two rods at home and run a spread of three — maximum four — lures and have that dredge in the water. With a bit of team work and practise I promise you will see better results regarding where the ﬁsh will appear in your spread and you’ll have a better chance of successfully hooking up.

METHOD
There are a few ways of running your dredge off your boat:
• Electric reel
• Traditional downrigger
• Off a 130 lb bent butt spooled with 400 lb monoﬁlament
Electric reels are the ideal way to pull your dredge in if you’re teaser ﬁshing — using the bait and switch method.
If you’re lure ﬁshing there is no hurry to get your dredge in until you have come to a complete stop as you’re running hooked rigged lures. I would advise you to also have a pitch bait or a pitch lure ready as there is a high chance of another ﬁsh following as you start to pull your dredge in, so always be ready. This method can be done with a traditional downrigger or else use a heavy marlin rod and reel spooled with 400 lb monoﬁlament.
This method of teasing is only for ﬁshermen who are willing to try new techniques and gain more experience in offshore ﬁshing.
One must remember that when you have driven over a hungry ﬁsh or a group of hungry ﬁsh they are going to come up regardless of whether you have seven lures in the water or two.
Simply put, it’s not the number of lures in the water nor rods on your boat that is important.
You have to concentrate on attracting that ﬁsh to the back of your boat. Once you have achieved that it will make your billﬁsh ﬁshing ten times more exciting. Your shorter turn around time of clearing lines and having more space on the deck will be an added bonus.

WHERE THE BIG BLUES ROAM