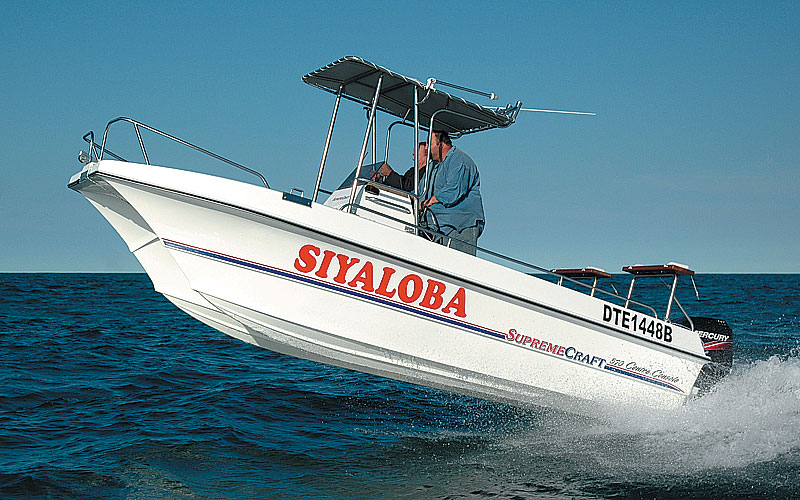 IT has been quite some time since we last tested a boat for A&G Marine in Port Alfred, and those tests were on their smaller range of cats. In the interim they have introduced a number of new models to their range — the Supreme Craft 570, 620 Classic — as well as a number of seaworthy cabin boats. The first boat up for test off Port Alfred was the Supreme Craft 570 centre console, and if this craft was anything like their smaller models, she was sure to be very interesting.

GENERAL IMPRESSION
A brand new boat almost always looks good, and the Supreme Craft 570 centre console was no exception. The new 570 from A&G Marine boasts a combination of a slightly older style with modern touches, which I thought was great as the craft’s look will thus appeal to both older and younger boaters.

The 570 has sharp lines and plenty to offer with regard to layout and accessories — and she looked more than ready for an offshore test. 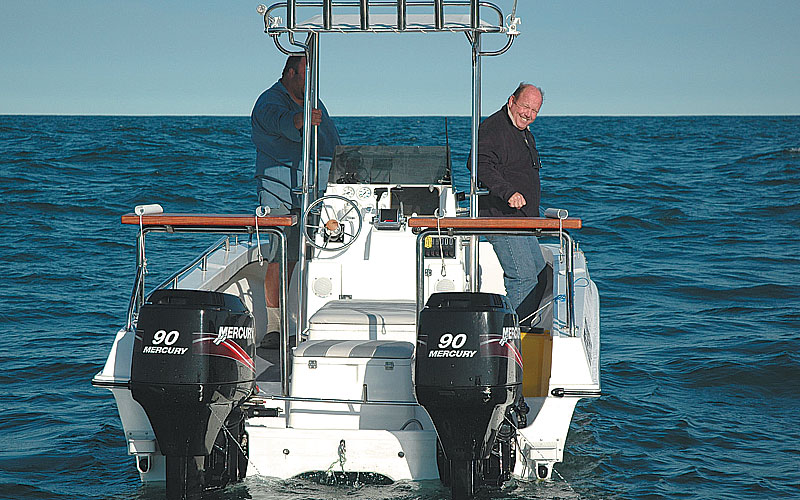 CONDITIONS
You never know what to expect when it comes to conditions off Port Alfred. This time round we scored close to perfect conditions for an offshore test — a moderate swell with an 8-10 knot onshore wind which created quite a short chop, ideal to test the ride and handling of the 570.

LAUNCHING AND TRAILERING
The 570 comes standard on A&G’s custom galvanised breakneck trailers which are really sturdy. The boat was easily offloaded and retrailered at the slipway. With the correct check-chain settings and electric winch, it should be just as simple when beach launching. 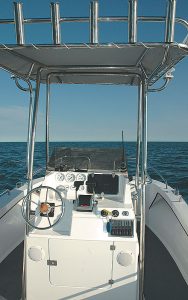 MOTORS AND CONTROLS
The 570 I tested sported twin 90hp Mercury two-strokes which were well-suited to this craft and, judging by the great performance from these motors, you could quite easily go down to a lower horsepower if need be.

The controls were binnacle-mount with an assortment of gauges, and she boasted a hydraulic steering system which made operating very smooth and simple.

PERFORMANCE
Being two-strokes, the 90hp Mercurys had serious grunt out of the hole and shunted the 570 onto the plane and up to high speeds effortlessly. Tweaking the trim to set up the ride was really simple as the 570 did not need a great deal of fine tuning to get her to ride well. Having both trim switches together on one control made it even more simple when operating.

Heading directly into the fairly uncomfortable chop, the 570 showed no signs of producing a backbreaking ride and was very comfortable right up to a flying speed of 30 knots. Running her side-on and with the swell and chop, the performance again was good. I had no quibbles with comfort and stability on the 570 and found that the general ride was dry for these conditions.

With the twin 90s it was really easy to get up to the higher speeds, and once up there you could tap right off on the top end with the motors purring at lower revs than usual for two-strokes. Going slightly higher on motor power definitely makes the difference — in a positive way, I think.

Easing off the throttles to slower speeds suitable for trolling, the general handling of the craft was again simple, and stability and comfort were maintained as before. Obviously, at slower speeds there was the odd splash coming over due to the conditions, but definitely nothing to whine about.

As in the past, surf simulation was not really that necessary at Port Alfred as getting offshore requires one to launch out of the estuary mouth through the surf. The surf was nothing serious on the day, and after a short wait before the surf zone, Andrew from A&G had us on the backline in the wink of an eye. 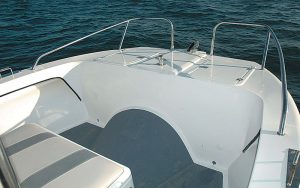 LAYOUT
When it comes to layout, the Supreme Craft 570 is well-suited to the fisherman looking for space and comfort.
In the bow there are easily accessible anchor hatches with enough space for hundreds of metres of rope. The area is complemented with a full stainless wrap-around bow rail. The gunnels on the 570 are at a medium height with built-in rod racks, and the entire deck area is non-slip for easy cleaning and less maintenance.
The centre console has ample space in which to get around and has plenty of space for electronics and stowage. It is finished off with a full, sturdy T-top and rocket-launcher rod holders.
Behind the console is a large raised hatch/stowage area that also serves as a seating area. Large flush-mount fish hatches are situated on either side of this hatch, and a livebait well is built into the false transom. The false transom area on the 570 is quite unique, being a very low area which flows into the motor well. A&G have repeated this design on many of their craft, obviously due to the specifics of Eastern Cape launches. If you are launching through heavy surf, or are just one of those skippers who gets regular hidings in the surf, then this design is well worth looking at due to the instant drainage out the back.
The stern section also features dual roll-bars, trolling boards and easy access between the motors. The layout is simple yet really practical for fishing, especially bottomfishing and flyfishing. The 570’s handling capabilities would also suit the avid gamefisherman.

FISHABILTY
As mentioned earlier, the 570’s spacious design was well thought out and is suited to many applications. The craft’s stability is good and on anchor or even on the drift it would be comfortable when fishing for bottoms or drifting baits for gamefish.
The 570 handled well at lower simulated troll speeds from just idling to 10 knots in the choppy conditions. Personally, I like centre console craft even for gamefishing, probably because it gives one extra walkaround space as well as casting space. 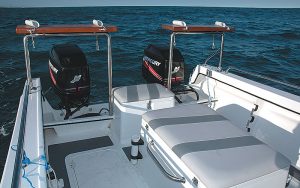 FINISH
It’s great to see how manufacturers like A&G Marine are striving to get new designs out on a regular basis and, in the process, are creating better finishes on their products in all aspects, from the fibreglass right through to the arbitrary fittings.
At the end of the day this all contributes towards a boat’s overall good looks, like on the Supreme Craft 570.

CONCLUSION
The 570 is a medium-sized cat that is easy to handle both when towing and at sea, is economical and can be used to entertain the family out on the water. This is yet another super model that A&G Marine have added to their already extensive range of craft.