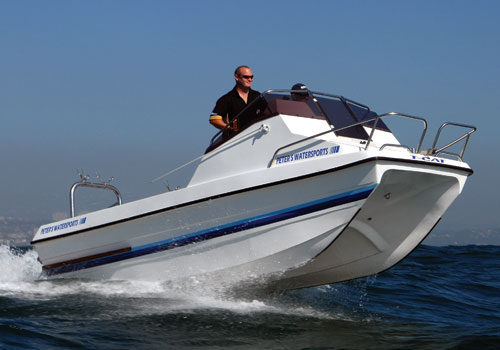 AFTER some serious jumping around, the Peter’s Watersports crew had the T-Cat fitted out and ready for the test, one that sprung out of the woodwork exactly on the magazine’s deadline!

This boat profile is our first for Peter’s Watersports, but will definitely not be the last. They are going to be supplying some interesting craft for tests in the New Year, including jetskis rigged for deep sea fishing, Aqua-quads, and a variety of other craft, so watch the reviews for some interesting developments.

Durban Ski-Boat Club was the launch venue for the test, and at 7.30am sharp the T-Cat arrived in tow behind the well-branded Peter’s Watersports Hilux double cab 4×4. At first glance the new improved T-Cat — being wider, and having quite a few cosmetic changes over the original model — looked larger than 17ft. Her appearance gave the impression that she was a simple, practical deep sea fishing craft, which would be easy to handle for her size.

For a change the weather was coming from the opposite direction, with the wind blowing from the north-east, gusting 10 knots, and already causing a shore break and making the ocean grumpy.

LAUNCHING AND TRAILERING
The T-Cat comes standard on a well built, sturdy, galvanised breakneck trailer. Perhaps it was overkill for the boat’s size, but I prefer it that way. Launching off beaches can be fairly tricky when you have to load and offload boats, but the T-Cat came off the trailer easily, without getting jammed in the sand when pulling the trailer back out with the vehicle.

After the test, trailering the T-Cat on the harder sand was also a simple task — with the help of a 9 000 lb Warn winch. The larger rollers on the trailer definitely helped to keep the boat straight while loading her. 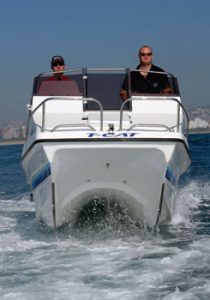 PERFORMANCE
Once off the trailer just on the water line, it was simple enough for myself and my companion for the test, Chad Llewellyn from Peter’s Watersports, to swing the T-Cat around through the small shore break. Ryan Hansen from Hansen Boatz and Toyz in Durban chauffeured Erwin Bursik around on the photography boat.

The T-Cat we tested was fitted with two 50hp Yamaha motors (non trims). Even on these smaller craft, I would prefer to have trim-and-tilt motors, as it makes fine-tuning the ride much easier. When I first saw that this T-Cat was carrying 50s, my initial thoughts were that the boat was going to be underpowered. This definitely was not the case, as the hull jumped onto the plane from a stationary position with great ease and speed.

Accelerating full lock to starboard and port, the T-Cat had a reasonable turning circle which, at a lower speed, had little cavitation. At a higher speed cavitation did increase slightly, due to the possible quick low-down torque from the 50 Yamahas. A few minor setting changes along with trim-and-tilts would help eliminate that. At higher speeds locking into turns, the boat held well on the water.
Cutting around Vetch’s Pier we were heading straight into the north-east chop and swell which had by now already jumped up to a 1.5-2m wind swell, with the odd white horses forming. I anticipated that we had a wet and bumpy ride coming up. Surprisingly, despite not being able to fine-tune the motors with trim-and-tilts to keep us dryer, the second pin setting was actually enough to keep the bow from scooping spray and splash.

Comfort-wise, the T-Cat gave quite a soft, stable ride, into the swell and chop, at an approximate speed of 10-15 knots.
Running the T-Cat side-on in the swell and chop, comfort and stability was good, even when a higher speed was being maintained. I also noticed that the splash and spray coming off the windward sponson, sprayed outwards and down, keeping the console area reasonably dry, and only spraying back onto the boat towards the stern.

Turning and running with the dreaded north-easter was going to be interesting, as I would have to push the T-Cat in and out of the troughs. I was expecting a possible “nose-dive”, since broaching and ploughing generally happens in these conditions. Tapping off on the drop into the trough and accelerating hard with the power of the 50hp Yammies eliminated any possible nose-dives and broaches. Again, the ride was comfortable, stable, and dry considering the conditions.

The overall power and light weight of the T-Cat make beaching her a breeze. Returning through the shore break with a good, long slide onto the hard, dry sand was achieved with ease. 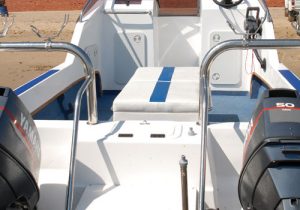 LAYOUT
The T-Cat is small enough to handle with minimal effort, yet is laid out in a practical, spacious fashion, making it seem larger than it actually is. As mentioned, the test boat came fitted with 2x50hp Yamahas (2-stroke, non-trims), dual roll bars/rod holders and a cable steering system (hydraulic would be a better option, if you can afford it).

All other cables are fitted neatly off the step-up transom area. The false transom area hosts battery hatches and a decent sized livebait well.
The deck area is carpeted for comfort and hosts two good-sized fish-hatches for the monster fish your mates catch that you hear about but don’t ever get to see. It also has two separate centre hatches that can both be used for fuel or, alternatively, one for fuel and the other for general stowage. Under the gunnels on both sides of the boat there is stowage space for rods.

The forward console area has two separate front-opening hatches with heaps of storage space in each. The top section has built-in dry cubby holes that can be used for items commonly used out at sea, and are a great place to mount sounders and GPS units to protect them.

A windscreen and stainless-steel trims also complement this area. The centre section of the windscreen pulls out and leads to the anchor hatch area.

FISHABILITY
With the T-Cat fitted out in the simple, spacious way that she is, it leaves you with plenty of good, all-round fishing space — even in the console area which is still at a reasonable height to be able to fight a fish around it. The gunnels are also a good height, ideal for balancing against when fighting fish, especially when it gets rough out at sea.
On the drift, at a slow troll speed and high troll speed, the T-Cat still holds very stable and comfortable. Fishing two or three aboard would be perfect, but if need be the boat could handle a fourth.

Nowadays, cost is becoming a huge factor for most skippers when going deep sea fishing, so the T-Cat is ideal for the fisherman who is looking for these characteristics in a boat that can be used for both general deep sea fishing and deep sea flyfishing.

FINISH
The T-Cat has a good all-round finish, which is complemented by the simple, neat, practical way in which she has been fitted out. Brand new and professionally done!

CONCLUSION
The T-Cat performed well in fairly messy north-easterly conditions. Add a couple of extra luxuries, and you have a generally easy-to-handle, multi-purpose craft that suits the whole family and does not need a Unimog to tow!