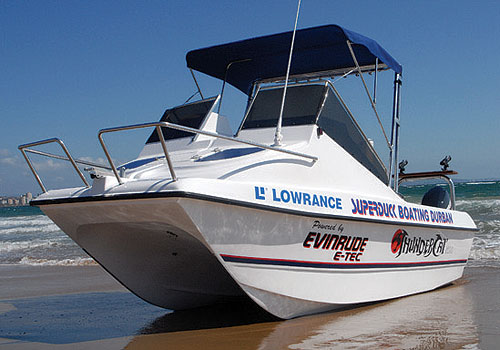 DURING the last year, Superduck Inflatables from Durban have come a long way in the boating industry. First AJ Smith and his professional team provided us with some Unique semi-rigid and rigid boats for test, and then, in the last quarter of the year, there was talk of them moulding their own 17ft ski-boat fishing cat.

Not long after that, I had the call booking in their new boat for test!
I thought that was quite brave considering the time, effort and money that goes into a project like that — and there’s no guarantee of the boat being a success.

All the same, I was assured that it was going to be a top class 17ft cat for the ski-boat fisherman.

GENERAL IMPRESSIONS
Five months later, a week before the test date, I was summoned to Superduck for a viewing of the near-finished product — the Thundercat 520 forward console.

Their ambition was to develop a craft suitable for all-round deep sea fishing, that was capable of handling the east coast, and had a good finish and good looks. That is quite an order, especially for the first boat out of the mould.

Upon viewing the Thundercat, I was pleasantly surprised, as I had not been expecting a “Picasso”. Indeed, she was pretty close to being a masterpiece. First impressions count a lot, and the Thundercat certainly had the looks, but I was still left wondering whether the boat was going to be ready in time and if she would perform well. Only the test would tell. 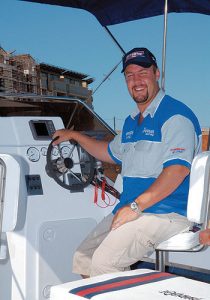 CONDITIONS
The Thundercat’s test day finally arrived. Durban Ski-Boat Club was the venue, and upon arriving at DSBC at 7.30am we were greeted by a brisk north-easterly wind which was already gusting at 15 knots. That automatically turns most people off going out to sea, but for us it is better for the tests as it gives us a chance to experience a craft at sea under varying conditions, some not too pleasant. A boat should perform under fair as well as bad conditions, the latter especially to bring the skipper and crew home safely when the weather turns.
On the day of the test, still not really expecting the boat to be ready, I strolled down to the beach to have a closer look at the horrendous conditions forming. To my amazement, there stood the Superduck team, alongside the Thundercat 520. They had just beached her, and by the thunder-sized grins on their faces, all had gone well with the craft.
Unfortunately we were unable to see the Thundercat coming off the trailer as she was launched in the harbour, but AJ assured us that his manufacturers had done a fine job of making the galvanised, breakneck trailer sturdy and simple to use.

In the shallow water, pushing the Thundercat into the small shorebreak was a relatively simple exercise for my co-pilot, Greg, and myself. Of course, as this craft had trims on the 90hp Evinrude E-Tecs, you could get into the boat far sooner than with non-trims.

Once out, it was time to put the Thundercat through its paces! 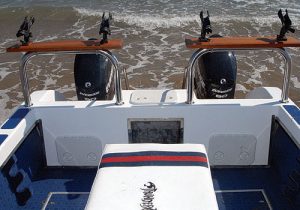 MOTORS AND CONTROLS
As tested, the Thundercat had two 90hp Evinrude E-Tec motors fitted. Initially I thought this was a bit of over-kill, but strangely enough, the 90s were well suited to the craft as far as weighting was concerned. On the power side, the props had larger pitches to compensate for the higher horsepower motors.

For those wanting the extra power and speed, the 90s are fine, although we came to the conclusion after the test that 75hp Evinrude E-Tecs or similar would probably be the perfect match.
Hydraulic steering has been fitted on this craft, and this is a must with the larger motors.

Acceleration was fast with the 90s, and I detected no cavitation from pull-off to when we got onto the plane. In full lock, both to port and starboard, the turning circle was tight, also without cavitation, and she banked slightly to the inner sponson which made the turns comfortable and fast.

Cruising at a fair speed and putting her into some tight turns was also no problem for the Thundercat 520, which held well without sliding or bouncing.

One reservation I did have when I first viewed the Thundercat at the factory was that the forward console area might be too heavy for her size, and would cause the bow to sit low in the water. When testing the boat, these fears proved to be unfounded, though, as she sat perfectly once on the water.

PERFORMANCE
Moving offshore into the rough north-easterly conditions was going to be interesting, as I was expecting to get wet and I had been clever enough to leave my foul-weather jacket at home!

Cruising head-on into the rough water with the motors still set on the low trim, the ride was comfortable and dry at a constant speed of around 12-15 knots. By making very slight adjustments to the trims, you could raise the bow slightly to suit your comfort level, as well as keep the ride even more comfortable when tapping on and off into the rough chop. Even in these conditions, the ride was really soft for a craft of this size. Personally, I believe a dry, soft ride is a good attribute on any craft, especially in rough conditions.

Changing our course and heading side-on into the chop and swell, I could increase the speed up to 15-20 knots while still maintaining the comfort level. What also surprised me was how well the water deflected off the chines towards the stern area, thus keeping the console area dry, only throwing a fine spray every now and then.

The Thundercat’s side-on handling was good considering the conditions, and tweaking the leeward motor up slightly raised the windward sponson, creating an even better ride. 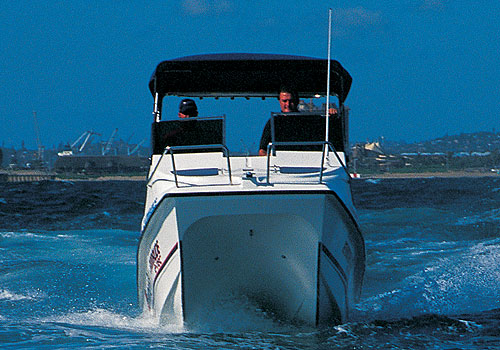 The Thundercat 520 again showed some good handling qualities when running with the swell and wind. Trimming the motors up slightly enabled us to maintain a fairly fast speed and comfort level. Pushing her up to around 15-18 knots constant, she dropped into the troughs without scooping water over the bow, and at no stage did I feel like she was going to plough or broach. Just like when we were running into the wind, we could maintain a better ride in the rough conditions by tapping on and off.

Back on the inside section of Vetch’s we even managed to push the Thundercat up to 30 knots, going side-on into the swell and wind without the ride being too wild and us having to hang on for dear life.
Running her up onto the beach was also a simple task as she had plenty of power. Being new, she slid far up the beach before stopping.
At no stage while testing the Thundercat did I have to keep correcting the ride, and with these handling characteristics, I’m convinced that the Thundercat will handle well in the rough surf conditions encountered along the Southern African coastline.

FISHABILITY
Whether you’re an entry-level deep sea fisherman or a more experienced old salt, the Thudercat has ample space for two to four anglers. The boat is spacious and has everything necessary to make the day’s fishing comfortable, including decent sized fish hatches, a good sized livebait well and rod stowage under the gunnels, to mention a few of her features.

The walkaround area is well designed and uncluttered, and the gunnel heights are comfortable to lean against when fighting fish. The centre petrol hatch is padded and is large enough to serve as a seating area for fishing off and while travelling.

When stationary and drifting with the strong wind, she still managed to be quite comfortable considering the rough conditions. Heading into the wind and swell, a troll speed of around 5-8 knots could be maintained, while still having a fairly comfortable, dry ride.
Running side-on, the troll speed could be increased to around ten knots without it being uncomfortable and wet for the crew. Running downwind, she also handled well at troll speeds up to ten knots, with us obviously accelerating and decelerating to maintain a constant speed.
As tested, the Thundercat had all the bells and whistles the average ski-boat angler would want, but there is still ample space to customise the boat to suit your fishing preferences. With all these fittings, she was still very spacious and uncluttered for her size, and with her good handling capabilities, she would definitely keep you out on the ocean for longer than you might originally have thought possible.

LAYOUT
The stern area has a false transom which houses all the cables, battery hatches, a large livebait well with pumps, and a dual roll bar system with rod holders. This follows through to a neat, uncluttered deck area carpeted with Flotex. It houses fish hatches, a centre petrol hatch/seat and gunnel-mounted rod holders.

Swivel seats complement the forward console area which also houses dry storage areas, tackle and equipment storage areas, windscreen with stainless trims and a decent T-top system, among other features. One idea that I particularly liked was having a separately moulded area for the control boxes, instead of them being mounted to the side of the gunnel. This worked very well.

The centre section of the windscreen pulls out and gives easy access to the anchor hatch area. The bow is also fitted out with flashy stainless bow rails and non-slip areas.

Careful thought has no doubt gone into the layout of this craft and positioning of fitted items, as everything is easily accessible, and at the correct height for the average-sized fisherman. 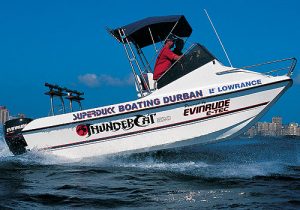 FINISH
Considering this was the first one out of the mould, I was really impressed with the general finish of the Thundercat 520 I tested. She has all round flashy trimmings, with a mix of sharp and curved lines, giving her a nice, modern look.

CONCLUSION
For a 17ft ski-boat, I was really impressed with the handling capabilities of the Thundercat 520. With its modern looks and performance, this boat is a win for all anglers.

Because of her size, the Thundercat will also be able to be towed easily on our roads and as far as Moçambique.

Hopefully, Superduck will bring out a centre console version of the Thundercat 520 in the near future, as I think that would be a great boat for deep sea flyfishing.

Compliments are definitely in order for the Superduck team on producing quite a cat, first time round!