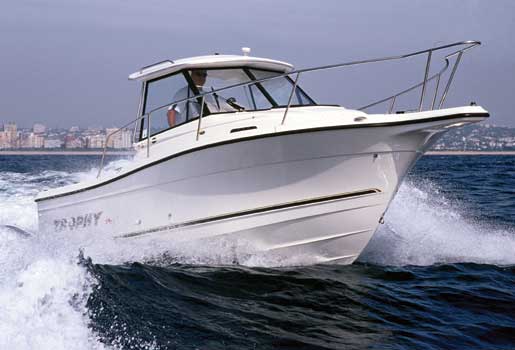 The Trophy 2509 came thundering out of Durban Harbour, flinging spray wide and aft as her deep-vee hull sliced the easterly chop on the early morning sea.

So this was the Trophy, I thought to myself as I watched her gliding across the kilometre-and-a-half of ocean to rendezvous with me. There is not a sight in the world of boating that enthralls me more than that of a big sportfisher approaching at full speed, directly towards me.

The Trophy appeared almost motionless, just the enormous energy of hull-over-water and spray flying as she approached, getting bigger and bigger with each passing second. It was enough to put me on a high for the day — well, until I got behind the Trophy’s steering wheel and throttle.

Built by Trophy Sportfishing Boats in Washington State, USA, the Trophy range of outboard powered craft extends from 18ft to 25ft, with various models to suit sportfishermen. Trophy brags that its craft are “designed by hardcore anglers for the genuine fisherman who doesn’t want to leave his family behind”. Having experienced the Trophy 2509, I can wholeheartedly endorse their claim.

This craft was towed to Durban by Monaco Leisure’s driver using a V8 Chevy 4×4 as a tow vehicle. “The boat tows very well — easy at 80 kays, can do 100 kays if you want,” said Petrus.

She was launched and retrieved at Point Yacht Club’s main slipway without trouble, I was told. I did not witness either of these two exercises as I was at sea aboard the CoastCat 18.

For the first hour or so I had to watch as Tony Lindhorst of Monaco Leisure in Johannesburg put the craft through her paces in front of the camera. In an ever-increasing easterly, I watched with interest just how this racy-looking deep-vee monohull worked the sea and how she spread the resultant spray.

Then it was my turn.

Crossing from boat to boat at sea in the severe chop was not easy. We accomplished this by running both craft with the sea at equal troll speeds, as well as using the bigger craft’s maneouvrability. I lived to tell the tale, and — likewise — Tony is still around to sell Trophy sportfishing boats.

Taking the reigns of a new craft, especially one that not only looks racy but has remarkable speed, is a little intimidating — but exciting.

An impression I gained on first seeing this craft was that I was looking at an upmarket sports machine — “Porsche-like”, if I was a motoring journalist. Sleek, streamlined, a prone stance, immaculate and, above all, fast. Yes, she has that sporting look about her, and sporting she was on the water.

Deep-vees have caught me in the past. With both motor trims and hydraulic afterplaners to correlate, getting them set in flat water is difficult enough. Trying to do it in rough sea is a different story.

Starting with the craft just on the plane and with both motors trimmed right in, I had then only the trim-tabs to play with. Soon the craft was to all intents and purposes trimmed to perfection. Thereafter, equal bow-up on motors and trim-tabs had her slicing nicely into the northerly sea and I could increase speed.

Twin Evinrude Ficht Ram Injection outboard motors were supplying the thrust — a task they performed with alacrity. Swinging 19-pitch props, these motors, at relatively low revs, made this craft perform beautifully. At 3 800 revs she was flying. More speed was instantly available but highly undesirable for anyone sympathetic to both craft and crew in the prevailing sea conditions. Throughout the review these fuel-injected motors ran very smoothly and were extremely responsive to throttle adjustment. 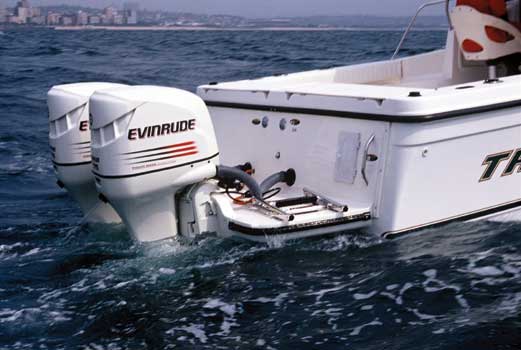 The twin Evinrudes are mounted very close together on the outmounted “swim” platform which is incorporated into the hull design — a very neat and practical installation.

I had the Trophy 2509 well trimmed and running well as I started my long run north, heading for fishing grounds off Umdloti Beach. With the north-easterly chop beating on our starboard bow, this deep-vee loved the ride, using her finely defined prow to cleave the wave crests without having to override them and become airborne, as one tends to do taking the chop straight on.

We made very good progress with the motors set at 3 800 revs and achieving speeds of 23/24 knots SOG. At this speed and bearing I only made marginal trim adjustments, more to play with her and assess how various trim positions affected her ride than to correct a characteristic of her performance.

It was all too easy, so to put some excitement into the exercise I swung her bow directly into the north-easter. I retained the same throttle settings, all the time watching and feeling the resultant effect on her performance in respect of speed, rev-counter settings and hull-over-water.

Initially, I perceived very quickly that her bow was marginally high as she was cleaving the wave crest way back with her shoulders instead of bow area. A little “bow-down” on the afterplaner’s toggle switch on the dash, plus a slight reduction of speed, had the Trophy and crew back in the comfort zone we experienced prior to the change of direction.

In skippering a craft with a substantially vee’d hull, the major aspect to be taken into account is sensitivity. It is this sensitivity that gives her her performance and her thoroughbred looks. It is also this sensitivity that worries all skippers who are unaccustomed to handling this style of craft. Perhaps the ride on a carthorse vs a racehorse is not an unfair comparison.

Fortunately, my own boat, SeaLord, is a serious deep-vee. I believe, therefore, that I have experienced all this style of craft’s idiosyncrasies to allow me to judge and really enjoy skippering the spirited Trophy 2509. To most, with an introduction to a craft such as this, initial excitement will quickly give way to concern, if not fear for a short while. After this, during the “getting to know you” phase, one will go through the “yes, it’s OK” stage. After this comes the “I love you” bit that I predict will last forever. And if you think it’s like courtship, you’re absolutely right.

With that off my chest, for I know many will phone me in the months ahead and ask, “But what about sensitivity and lateral stability?” So I am getting in first and telling you that it will take more than an hour behind the wheel of the Trophy 2509 to get to love her, especially if you come from a background of twin-hulled craft. After getting to know her properly, the love affair will surely last forever. 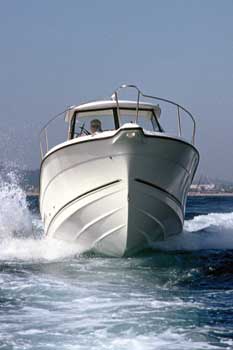 During the long run home, mainly with the wind and sea directly on my stern, she rode beautifully, not with the suck-back most other craft experience when they override a wavecrest and find no water support on the other side. It’s strange at first, but using additional power this craft increases momentum and rides herself out of any apparent problems. Under those circumstances I raised her bow significantly, thereby tucking in her stern, and rode the waves easily.

A change in direction to experience the sea on the aft beam gives her possibly her best ride, but remember to provide her with a little lateral support by turning down the trim-tab on the transom opposite to the prevailing sea.

Most of the above ride characteristics also prevailed during my testing her through 360° as if trolling marlin lures at 7/9 knots. She settles in the water well, still using her sharp entry to soften head-on sea conditions, and using her size, she trolls at a fairly constant speed-over-water (SOW) .

At slow troll speeds the THD — Trophy Hull Design — of a double chine strake substantially reduces the “rock-and-roll” associated with all deep-vee craft when slow trolling and drifting. These strakes, one which is marginally turned down, deflect spray and reduce drag, as well as induce greater stability.

As stated in the introduction to this review, the manufacturers have given a lot of attention to providing a great deal of comfort for family and friends. To a degree this reduces the fishable cockpit area for a trolling style of fishing. On the positive fishing front, the walkaround and forward deck area will provide a lot of space for light-tackle angling and bottomfishing, not forgetting — of course — flyfishing and jig casting.

For serious trolling, while no outriggers had been fitted, these can be supplied as an extra, as — no doubt — can a fighting chair. But I believe this craft is aimed more at the light-to-medium class style of fishing where adequate facilities have been provided for tackle and rods to be set and stowed, appropriate for this style of fishing.

“Stowed” is the operative word, to my way of thinking, as once the tackle has been packed away, the craft is left free to be enjoyed as a pleasure boat for offshore cruising and socialising. Yes, I can think of worse things to do than enjoying this craft for sundowners on the “bay”, while the kids are way up front, fishing and also enjoying this investment in pleasure.

As one would expect, this craft oozes practical experience in its design, layout and finishes. With approximately 50 000 Trophy boats having been built since the company commenced production, it is not surprising that they claim that “every component, every feature, every design and engineering aspect of every boat is as perfect as we can make it”. As they say, they have a formidable reputation to uphold — and it shows in the final product.

Within the confines of a craft this size, Trophy has designed her to maximise the space available. Inside the cabin area is housed not only a fridge, provisions’ cupboard and toilet, but also a table between two side bunks that can be lowered to become a practical size double bed. 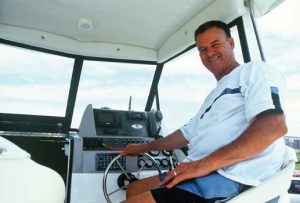 I enjoyed the skipper’s console area which is well protected, of adequate size and well appointed with gauges and instrumentation. The access to the front cabin can be closed off, leaving this working area in the hands of those running the craft.

One aspect has to be noted and that is that internal mouldings have been designed with all rounded edges and combing to assist in providing as much comfort as one can on an offshore fishing craft. To reiterate, every aspect has been considered to ensure stowage of all conceivable paraphernalia, leaving a neat and free-from-clutter deck and console area. 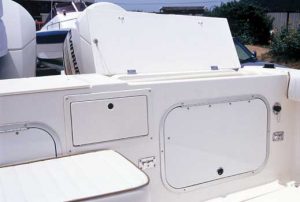 One such example is the two high-density plastic insert liners that are suspended in the transom’s top gunnel. They provide convenient stowage for bait, even smallish fish, yet can be removed for washing and thus providing access to behind-transom wiring and pipe work. Many, many other features spring to mind, all bearing the same theme of practicality and high-grade finish. And where hardware is needed, that too is of good quality, suitable for marine use.

My task in this review is to introduce you to this craft and to tell you of my opinions about its presentation and performance while undergoing open sea trials. It is up to you to visit Monaco Leisure in Bryanston to see for yourself the finishes and extras that go to make this craft such a popular boat in the very demanding market of the United States of America.

You will be very pleased you did, for whether you can afford a craft in this category or not, one can dream. And besides, I can assure you that you will learn a lot from scrutinising the Trophy 2509 Walkaround.