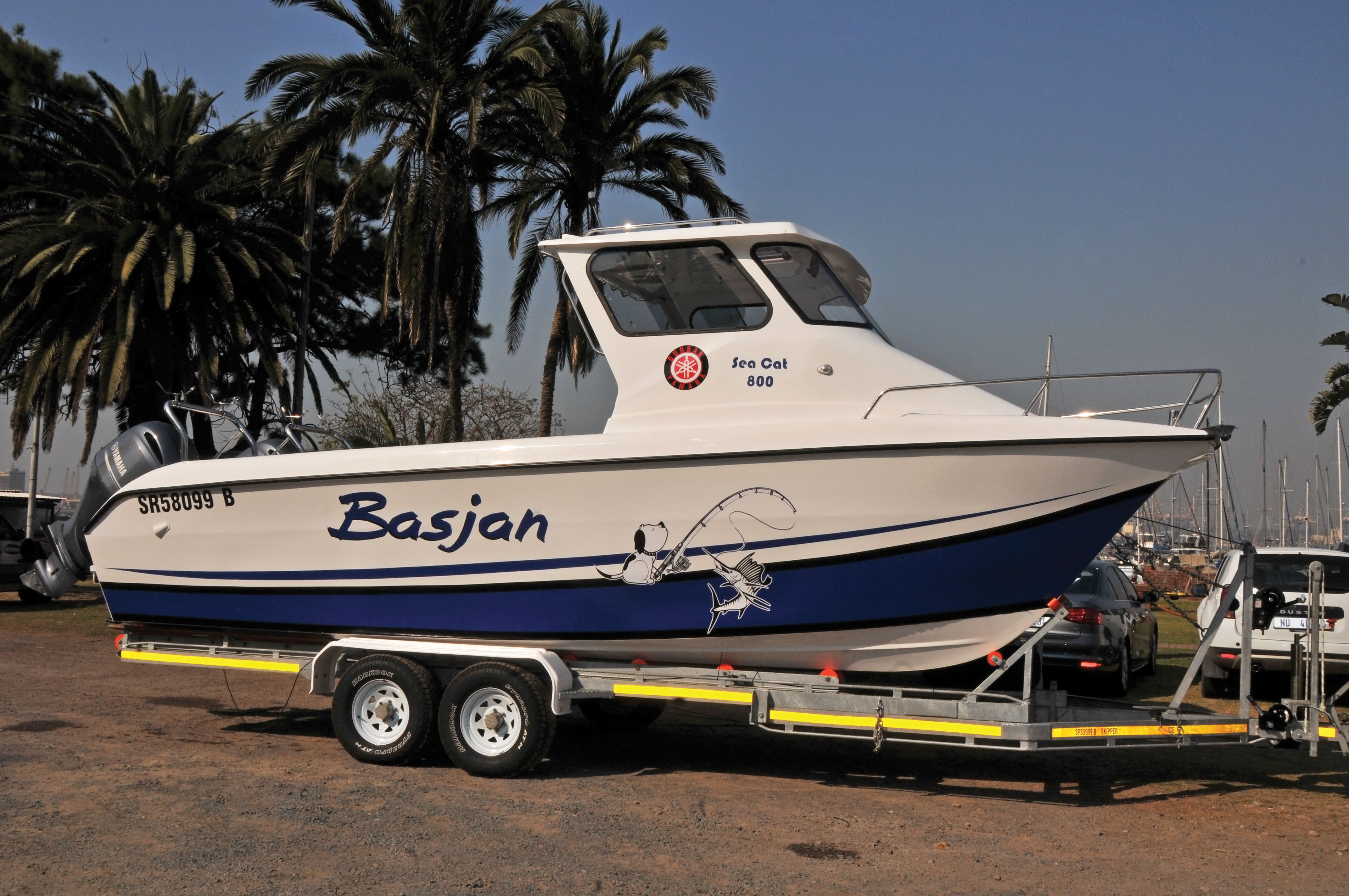 THIS, the latest, the biggest and the best Sea Cat in the range was conceived before the 2020 lockdown and finally completed and fitted out once the boating industry had been given the go ahead to begin building boats again. Durban Yamaha’s Ryan Hansen and Grantley Read of Sea Cat Boats were like anxious parents waiting for the Sea Cat 800 in full cabin format to finally take to the ocean. The popularity of the Sea Cat 800 forward console and centre console models had proved to them it was the full cabin Sea Cat 800 that would thrust this craft into the “big boat league”. Prior to Basjan’s handover Ryan Hansen got permission from her new owner for me to take her to sea for this formal review. A craft of this size that will finally be fully rigged for marlin fishing off the northern KwaZulu-Natal coast has to take a leap of faith that she’ll be welcomed into the “Big Boat Club” and can run shoulder to shoulder with the formidable array of seasoned marlin craft that annually fish these waters for the crème de la crème of fish, marlin. My task was not to just review the niceties of hull, deck and cabin finishes, but also to judge her ride in rough waters and how she would stabilise her ride during the long hours she will spend trolling marlin lures in a full range of sea conditions. Watching her stability while photographing her, and the way her hull worked the water in an ocean full of holes from the strong north-easterly of the previous few days and the prevailing strong northerly wind that was blowing a good 10 knots during the time we were at sea was very informative. Her attack on a rolling swell and the way she landed gave me a lot of confidence that I could look forward to an enjoyable time putting her through her paces when I eventually took control of this Sea Cat 800. 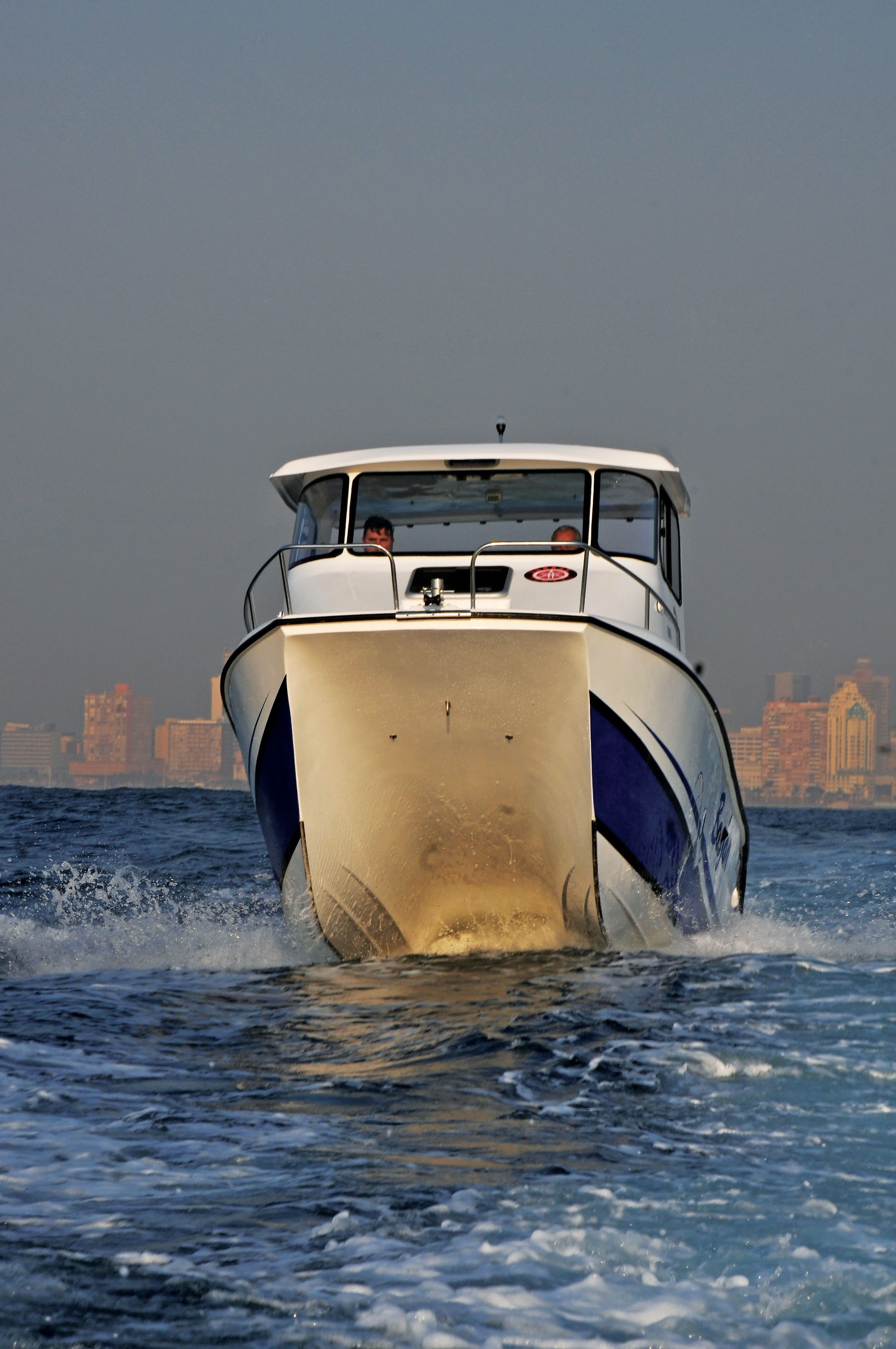 As I have just stated, the sea was far from flat. From years of experience marlin fishing off Sodwana Bay and Richards Bay I know this is the type of sea that we have to contend with 80% of the time while targeting marlin and would prove a good test for the Sea Cat 800. Basjan, all nearly four tons of her, arrived at Natal Deep Sea Rod & Reel Club on her extremely sturdily built double axle trailer which is also manufactured by Sea Cat Boats. I was told it was an easy tow behind Ryan’s Toyota Land Cruiser. Towing a craft this size on a purpose-built trailer is always going to be a big task, but with the right combination of vehicle and the perfect trailer, it can be accomplished reasonably comfortably. As stunning as Basjan looked both on land as well as on the water, it was to an extent cosmetic, for only when I had her helm and throttles firmly under my control and felt her hull “working” the ocean was I able to get to know her sufficiently to put my conclusions on paper. The Sea Cat 800 I tested was powered by twin Yamaha 200hp 4-stroke motors swinging counter rotating 17 pitch stainless steel cupped propellers. This combination, when powered into action, all had to come together to provide the performance one needs from a craft of this size. My first action after starting the motors was to trim both down as far as possible so that, when I powered her forward, I could judge her forward stance as she glided onto a plane before then trimming her bow up to attain what I considered to be her sweet attack on the sea as I headed north towards Umhlanga Rocks. The long planing surface of these bigger ski-boats in the 7- to 9 metre class generally enables them to get onto the plane relatively easily provided there is sufficient thrust. In other words, unlike smaller ski-boats that have to power themselves up out the hole before getting onto a plane, the bigger boats seem to slide onto the plane. Logical if one thinks about it. It requires an inordinate amount of torque from the motors to, as in this case, lift the bow 8 metres in front of them upwards to the extent that they can climb out the hole as a smaller boat would do. 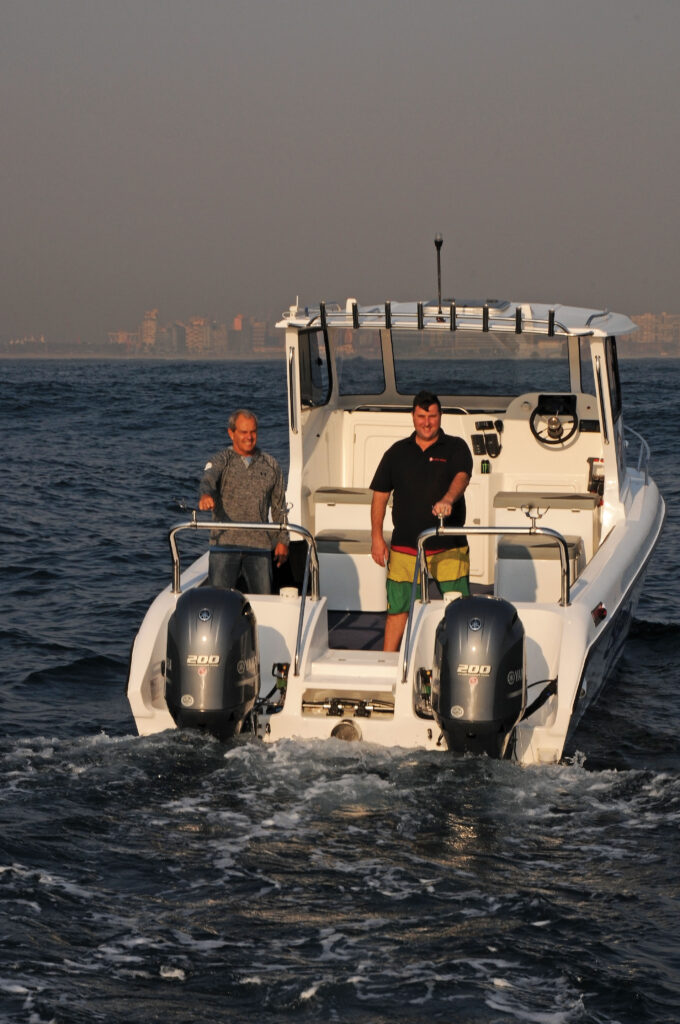 As I thrust the throttle forward I watched the RPM climb as the increased momentum got her to start sliding forward and get on the plane. At 2500 RPM she was starting her plane and at 3200 RPM she was riding beautifully at 20 knots. I had trimmed her marginally bow up with a tad higher trim on the starboard motor to hold her stable in what amounted to an aft beam sea with a port bow chop. At 20 knots we travelled very comfortably for many kilometres, allowing Grantley and I to discuss the various ride characteristics of his new creation. On turning into the swell as I was intending to run a reciprocal course back towards Durban, I had to come off the throttle to run almost directly into the reasonably big swell before I came about and ran the reciprocal at 20 knots. Whilst they were very different sea conditions, only minor lateral trimming was required to ensure a very pleasant ride back. On a marlin boat the vast majority of one’s day at sea is spent “pulling plastic”. To ensure that one would get the best lure performance possible, I put Basjan into large figure-of-eight turns at speeds ranging from 5- to 8 knots, judging what sort of water spread this hull produced and to determine where I would place the two short rigger lures. Even when we went over 7 knots, especially on the starboard side that generally closes up at that speed, a pocket of clear water was available to run that short lure. Another crucial performance aspect of a craft that’s to be used for this high action sport is its ability to back up on a fish. I trimmed the motors up a few bars and then, using forward/reverse on both motors, I was able to manoeuvre and back up reasonably fast without excess water washing up onto the deck through the transom gate area. One also has to accept the limitations when doing this manoeuvre on a boat like this where the motors have had beaching kits fitted. Regardless of this I was able to get very acceptable manoeuvrability while performing these routines. Please note that when trying this you must make sure you trim up both motors, otherwise a fast reverse will have the motors dragging the aft of the craft underwater and a big wave could barrel over the aft deck. Another facet of this craft’s performance I needed to ascertain was how she would react to a surf launch. In most cases on our coast this involves a run to port with the main waves building up on the starboard bow. I judged her take off speed and distance covered in some fairly big swells building up over the Kinmount Bank off Durban’s beachfront and I found she has more than enough acceleration and gets onto the plane very quickly to run a channel if need be. Likewise, to abort and turn to port to get back to the bay was an easy swing. All in all I enjoyed swinging her both to port and starboard feeling not only her ability to turn very quickly but also, more importantly, to get this large craft out of the turn and back onto the plane. These two Yamaha motors really have a lot of torque. Talking of torque, Ryan assured me that on the bay she does 78km at 5800 RPM. That’s not my thing, though; I get my thrills playing at the bottom end of the torque curve in an area that really matters when one is actually fishing at sea. In designing the Sea Cat 800 a huge amount of thought and detail has gone into turning Basjan into the superb craft she was when I boarded her. 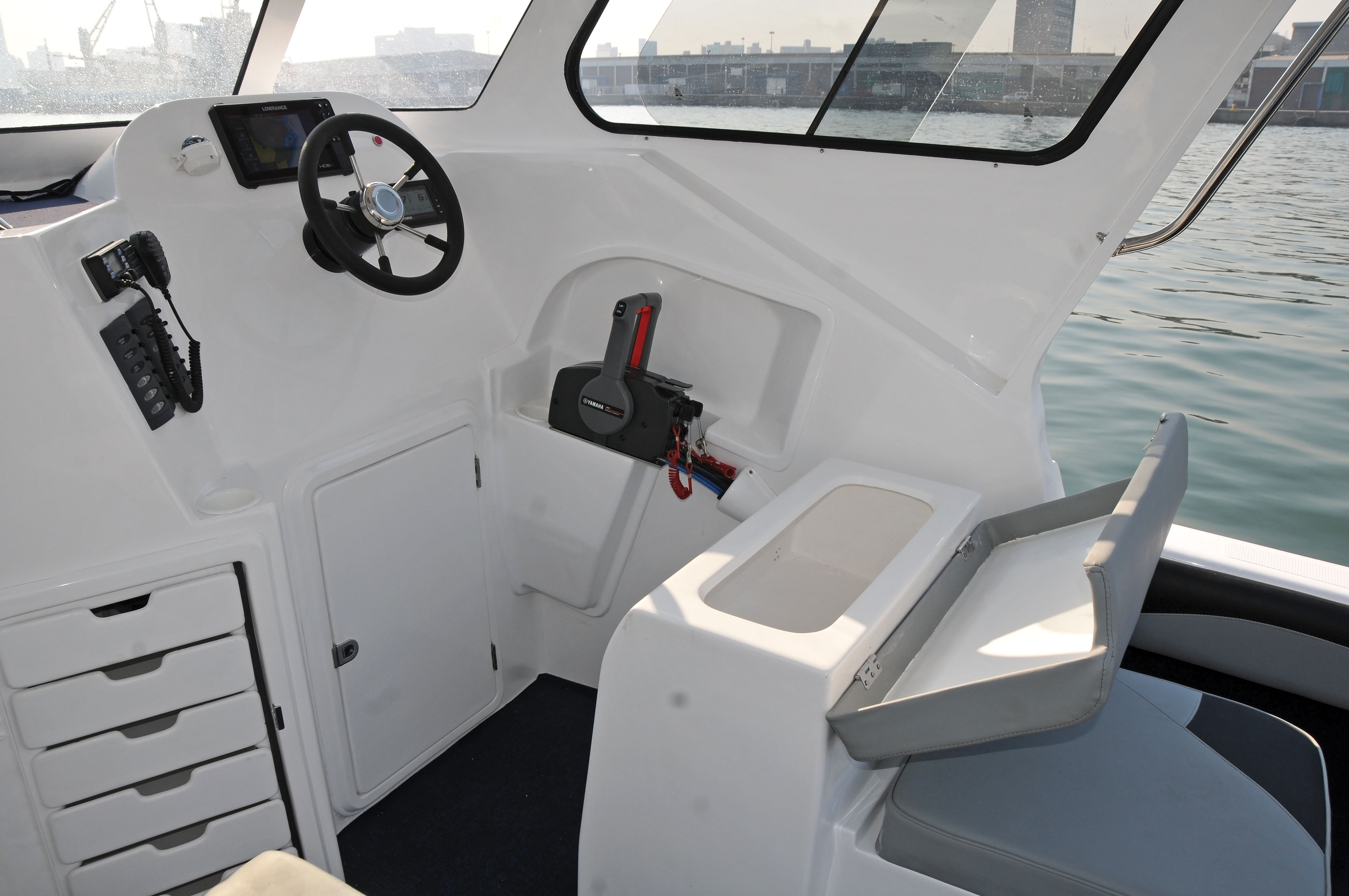 Apart from her overall lines which are so blatantly obvious in the accompanying photographs, there were many large and small aspects of her finish which I was incredibly impressed with, but I can only cover a few in this review. A craft like this has really got to be physically crawled over to fully appreciate what Grant, Ryan and their teams have incorporated to make her world class. The aft deck area houses both the big batteries for the motors as well as the “house” battery. They are well hidden but very readily accessible if quick access is required. The raised walkthrough of the transom houses a livebait well which very cleverly acts as a clear water reservoir to feed the double luna tubes situated on each side of the walk through. Each luna tube has a separate pump to keep it filled with a bubble-free flow of water from the livebait hatch. The aft deck water drainage from around the aft fuel holders is channelled through to the aft scuppers. I initially thought it would be great for rainwater or spray, but perhaps not for water coming over the transom, however I was very impressed as virtually none of the heavy water I took over the transom ended up in the fuel hatch. Possibly the most impressive feature on this craft — and the area that will hardly ever be seen — is the wiring of the entire craft’s electrical system. 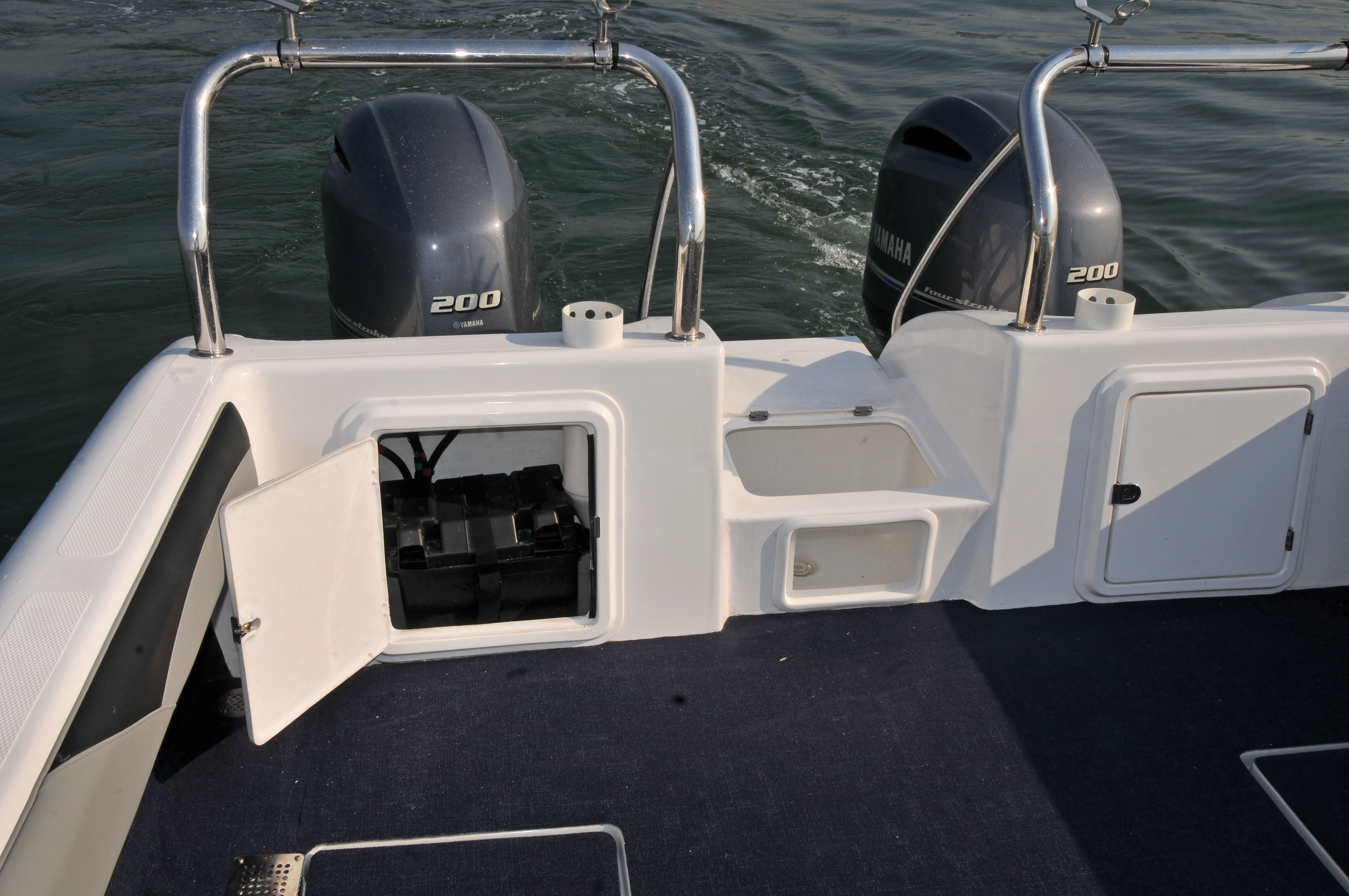 Wired with specially coated cables that are made with marine tinned copper wire and which are extremely neatly installed, this system should not have any electrical malfunctions due to cable corrosion which is so prevalent in ski-boats. The cabin itself is spacious and well-appointed with a cooler box/storage box under the two bum seats, making for easy access. Opening side windows as well as a roof hatch and an air scoop under the forward cabin roof-eave provided more than sufficient air movement in the cabin. With the current swing in boat building to “no wood” craft, extra effort is needed during manufacturing to ensure that a top quality finish is achieved. A thorough inspection of both the hull above deck and internal finishing enables me to state that an extremely high standard has been achieved on the Sea Cat 800. Basjan will stand on the beach at Sodwana with her head held high among what must be ranked as the finest line up of big ski-boats in South Africa. This craft has already drawn interest from a number of prospective buyers from outside the country and I am positive this model of the Sea Cat 800 will prove very popular here in South Africa.