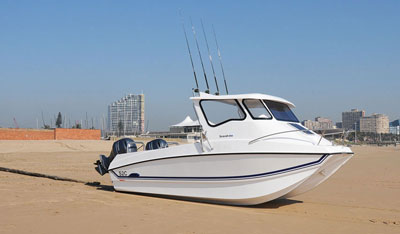 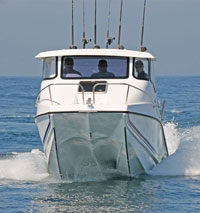 IT’S been a while since I was last invited to do a boat test, so I was very excited when Shaun Lavery asked me to test the cabin version of Yamaha’s Seacat 636. With the economy in such dire straits, very few boat builders are even updating their current boats, never mind building new ones, which accounts for the silence, but Yamaha are trying hard to stay ahead of the pack.
Although the 636 Sport Cabin boasts the same hull as the 636 Hardtop that I tested about two years ago, she has a totally different look about her because of her full cabin.

FIRST IMPRESSIONS
This Seacat 636 Sport Cabin gives you the impression that she is much bigger than her predecessor, and her hard top and forward console which has been enclosed with protective perspex windows gives her a very sporty look.
As I’ve mentioned in other reviews, personally I prefer a centre console craft, but this version of the 636 gave me the impression that she would be even drier than the previous 636 Seacats that I’ve tested. That’s an especially important feature when you’re fishing miles offshore for marlin and the sea’s rough.
We’ve all had our fair share of battling to get some or other boat loaded or offloaded, but not this time — Shaun simply pulled her onto the trailer using the winch. Every time I watch him I marvel at how easy he makes it look — no doubt it’s something he’s learned from extensive experience. 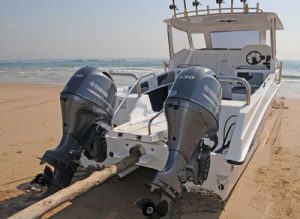 CONDITIONS
The sea was as flat as a lake, with no swells and baitfish all over the place. Remember, this is a big boat, so I wouldn’t advise you to try and push her by hand on the beach — you’ll definitely suffer. Most operators of big boats like this mount a push bracket on the stern so that a pole can be attached and can be used to push her in. Fortunately the test boat was also fitted with that luxury, so launching was simple.

MOTORS, CONTROLS AND PERFORMANCE
The Seacat 636 Sport Cabin I tested was fitted with two 130hp 4-stroke Yamaha engines with binnacle-mount controls. They’re beautiful engines with a lot of power, so they were right up my alley. I believe that big boats like this should have ample power behind them just in case they need it.
The controls were very smooth, but you have to be careful when using them because they do not have a neutral lock; that’s why they are so smooth — you just push forward and they slip into gear. If you pull the control back to the middle it’s in neutral, but if you pull too far back it goes into reverse and you will hear gears grinding.

Similarly, you have to be careful that when you hit the beach you don’t pull the gear lever too far back.
The hardtop version I tested in 2013 was fitted with twin 150hp four-strokes and I didn’t notice much of a difference between that and the 130s. Although the engines were smaller, they still had more than enough power to get her out the hole fast enough for a surf launch.
These new F130A motors have a lot of power, are highly efficient and are very responsive. The fuel economy is also very good. The F130A’s maximum operating rpm range is between 5 300rpm and 6 300rpm and this engine falls into the same range as the F70A and the F115B. The F130A is also the lightest in its class power-to-weight range. If you’re in the market for engines in the 130hp range it would be worth your while to check out this engine as it’s one of the most developed engines in its class
A few years ago everybody was asking whether they should choose four-stroke or two-stroke engines because back then there was little difference between the two when it came to pull-away. Now, with the fuel price going through the roof nobody asks anymore; it seems it’s the norm for most boats to be fitted with four-strokes. 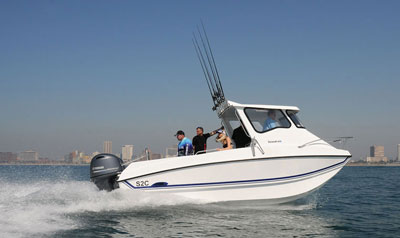 Even with the bit of extra weight, the 636 Sport Cabin is still very fast out the hole and getting on the plane. For a boat of this size her turning circle is surprisingly tight, and she’s able to turn between swells when launching through the surf. There was no real cavitation on the turns and on the pull-aways.
As we proved, it is quite possible to launch her from the beach, and the push bracket and push pole make life much easier.
I found her performance out at sea to be flawless, and she handled the sea with grace. With nearly no swell we travelled back to the base with Ryan Hansen from Durban Yamaha behind the wheel pushing the boat at full throttle, and I was surprised that we felt no pounding, even at such high speeds. She never showed any signs of broaching in a following sea, and although the skipper would obviously have to take care when heading into bigger, rougher seas, she gave me a soft ride.
As always it’s essential for the skipper to take his responsibility seriously — slow down where necessary and accelerate when possible. 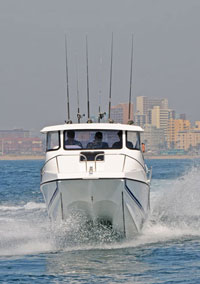 LAYOUT
Grant Read has done it again — his layout for a big boat like this is perfect and he really has utilised the space superbly.
There’s a nice comfortable size cabin in the front and the anchor hatch is in the bow with walk through access.
The front console houses a dry hatch for cell phones and all the paperwork needed these days, and there are two bum boxes in the front with seats behind them for the crew. Fuel hatches are situated underneath the seats.
Self-draining flush fish hatches have been provided in the carpeted deck, flanked by padded gunnels to protect your knees when you’re fighting a fish standing up.
At the back, in the false transom, there’s a livebait well in the middle and a battery hatch on each side.
In addition to the eight rod holders on top of the cabin roof, a rod holder is mounted on each roll bar at the stern. There’s also space for rod stowage in the recessed areas below the gunnels.

CONCLUSION
This is one of the best boats I have been on, so she fits in perfectly with the other 636 Seacats I’ve tested before. Her layout has been very well planned so that there’s ample deck space available.
When it comes to her finish, what can one say — it’s superb; something we’ve come to expect from all of Grant’s boats.
I could not fault her ride and her stability was remarkable, especially with the big changes that have been made to her top structure.
This is also one of the most comfortable boats I’ve been on. Her size is still within the legal limits to be able to tow her around and launch through the surf, and you can tow her with a normal 4×4, nothing bigger is required.
If you’re in the market for a new boat give one of the Yamaha dealers a call and book a test drive.