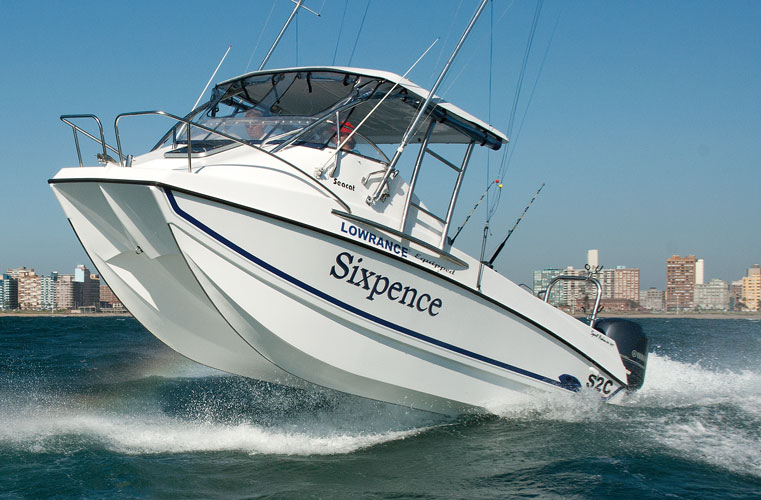 A TEST of the Seacat 636 Hardtop was long overdue. During the Marlin Club’s annual competition held at Durban Ski-Boat Club I got my first peak at the new 636 Hardtop. Although it is the same hull as the 636 that I have tested previously, she has a totally different look about her due to the hard top.

Shaun Lavery of Yamaha approached me and requested a test on this new 636 Seacat, and when I met up with Shaun and Grant Read at Durban Ski-Boat Club for the test, I noticed that they had finished her off with all the bells and whistles.

They have also added a couple of extras that I will discuss later. 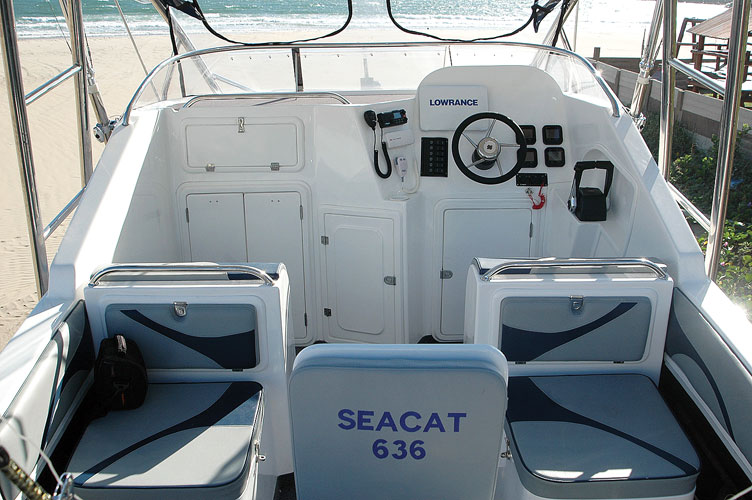 FIRST IMPRESSIONS
This Seacat 636 Hardtop is impressive indeed, like her centre console predecessor which I tested two years ago (see SKI-BOAT May/June 2011), but even more so with her hard top which gives her a more sporty look and finish. Her hard top and forward console makes her look like a different boat.

Although I prefer a centre console craft, this boat seems quite different to the usual forward console boats I have tested. I was keen to assess the difference between the two boats.
I was most impressed with the centre console version — so what lay in store for me with the new 636 Hardtop? Time would tell.

Although we used the club’s tractor to put her in the water, I was looking forward to returning to the beach to see if she loaded as easily as the centre console, not that I envisaged any problems. The more you do it the easier it gets.

We have all had our fair share of battling to get some or other boat loaded or offloaded at some time or another, but that’s all part of the learning process. As I said, the more you do it the easier it gets — or so I hoped. When I ran her up the beach after the test, Shaun used his Navara to pull her onto the trailer with the winch. Every time I watch him, he makes it look so easy, something gained from experience and doing it over and over again.

Because of her size she comes on a double-axle galvanised trailer.

WEATHER CONDITIONS
I have to say that this was one of those times that hope played a large part in the photographic exercise. All one has to do is hold on, shoot, and hope the photos come out!

The sea was horrible with swells coming from all directions. However, I could not rush the Seacat 636 Hardtop because with all the horsepower in her large engines pushing us, if I caught a swell just wrong or too fast we would have been airborne in an instant. Not that she is too light — no, nothing of the sort — it was simply a case of intense concentration under the circumstances in the prevailing atrocious conditions, and tapping off when necessary.

The northeaster made the sea look like the Zambezi at the foot of Victoria Falls. However, I have to add that these conditions were just what the doctor ordered for the test. If she was ever going to break or take on any water, it would be in conditions like these.

So, with a fairly high shore dump rushing onto us, we struggled to turn her around and push her far out enough to be able to start the engines and get going. Remember, this is a big boat, so if you going to try and push her by hand on the beach you will suffer. That is why most operators of big boats like this mount a push bracket at the stern for a pole to push her in, but unfortunately we didn’t have that luxury and it turned out to be hard labour for us.

However, the three of us eventually managed, and after getting a wee bit wet, off we went into the maelstrom. 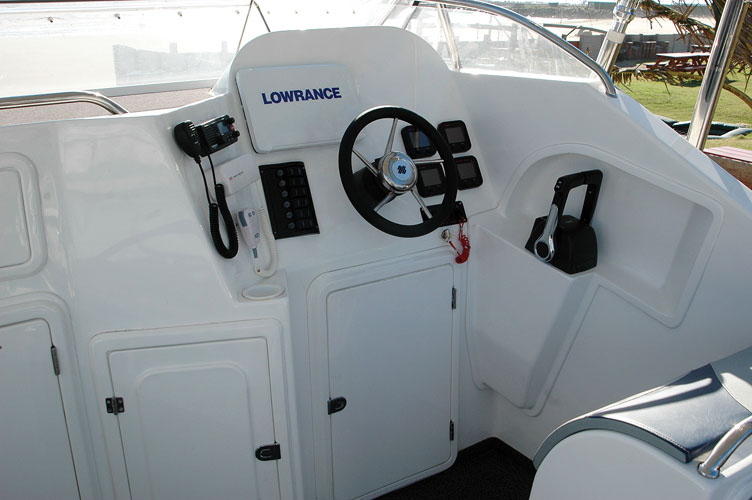 MOTORS, CONTROLS AND PERFORMANCE
This Seacat 636 forward console with a hard top was fitted with two 150hp 4-stroke Yamaha engines with binnacle-mount controls. They’re beautiful engines with a lot of power, so were right up my alley.

Especially with a big boat like this I believe she needs ample power behind her just in case she needs it. The controls were very smooth, but the only thing to watch out for with these controls is they do not have a neutral lock. That is why they are so smooth — you just push forward and they slip into gear. You pull them back to the middle and they are in neutral, but if you pull too hard they go into reverse and you will hear gears grinding.
Similarly, you have to be careful that when you hit the beach you do not pull the gear lever too far back.

It is actually quite funny because a few years ago everybody was asking whether they should choose 4-stroke or 2-stroke as back then there was little difference between the two when it came to pull-away.

Nowadays nobody asks anymore. It seems the norm that most boats are fitted with 4-strokes. Even with the bit of extra weight, she is still very fast out of the hole on the plane. For this size boat her turning circle is surprisingly tight, and she’s fast enough to turn between swells when launching through the surf.

As we proved, it is quite feasible to launch her from the beach, but it is recommended that a push bracket is fitted for use with a push pole. It will make life much easier.

Her performance out at sea I found to be flawless and she handled the rough sea with grace. With the swell all over the place, she was still stable enough for us to travel at speeds between 15 and 20 knots. She never showed any signs of broaching in a following sea, whilst into the heavy swell it would be the skipper’s responsibility to proceed with care.
It’s like driving a car on a road with a thousand speed bumps. The minute you pick up speed you have to hit the brakes to go over the next speed bump. This is how it was in the conditions we experienced that day.

The message was clear — be aware and be a responsible skipper. Slow down where necessary and accelerate when possible. 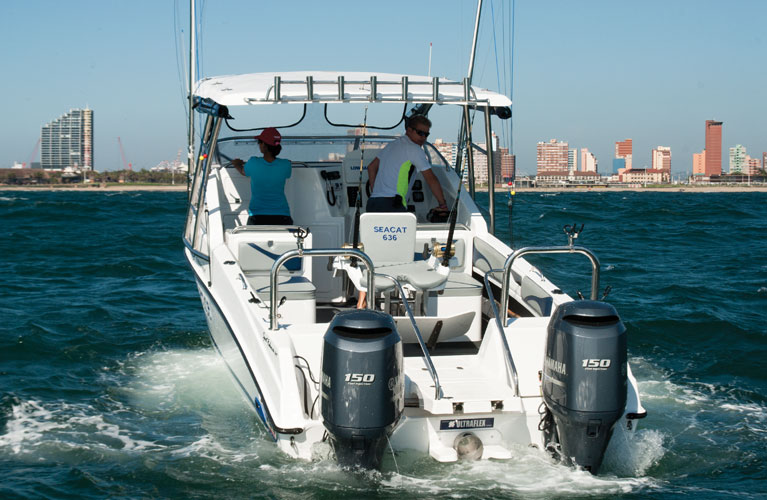 LAYOUT
Grant has done it again. His layout for a big boat like this is perfect, having utilised the space superbly.

The normal anchor hatch is in the bow with the hard top attached to the front to strengthen the top. The whole frame has been designed in such a way that there are no rattles when travelling. Easily accessible outriggers were mounted on both sides.

The front console houses the normal hatches upfront as well as the dry hatches for cell phones and all paperwork needed these days. Then there are two bum boxes in the front with seats behind them for the crew, and with fuel hatches underneath them.

Self-draining flush fish hatches have been provided in the carpeted deck, flanked by padded gunnels to protect your knees when fighting a fish standing up. In the middle of the deck they have fitted a fighting chair for the marlin aficionado, and at the back in the false transom you will find the livebait well in the middle with a battery hatch on each side.

A rod holder is mounted on each roll bar at the stern, adding to those on top of the hard top where there are another seven. Added to that is the space for rod stowage recessed below the gunnels. 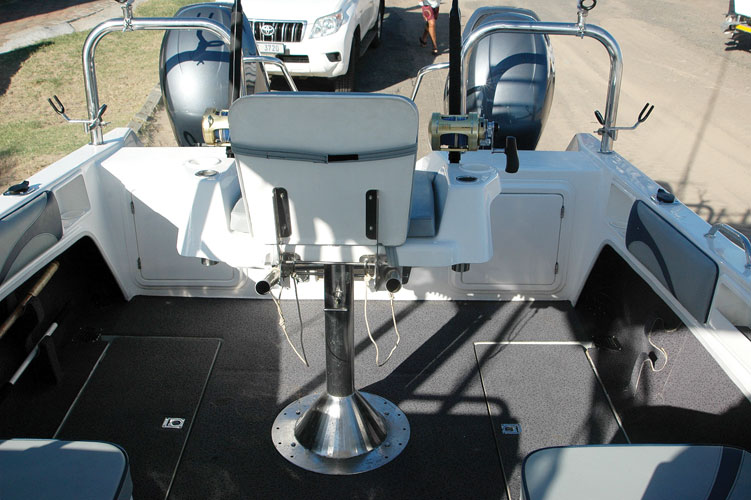 CONCLUSION
Without doubt, this is one of the best boats I have been on. Her layout has been excellently planned, in such a way that there is ample deck space available. And when it comes to her finish, well — what more can one say — it is superb, something we’ve come to expect from all of Grant’s boats.

I could not fault her ride and her stability was remarkable, especially in the horrid conditions prevailing on the day of the test.

This is by far one of the most comfortable boats I have been on. Her size is still within the legal limits to be able to tow her around and launch through the surf, and for her size you can tow her with a 4×4, nothing bigger.

I believe that, price-wise, she is worth every cent if you are in the market for a boat in this class. This is not just another boat in the Seacat range — this is Yamaha’s top-of-the-range Seacat. She’s a very special boat indeed.