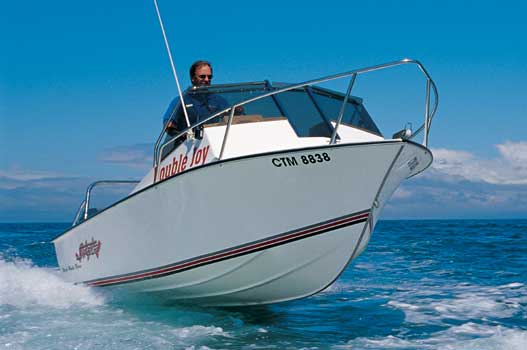 In the spring of 1984 I tested the Ski-Craft 16.6 monohull in Durban and commenced my review with the words, “The Ski-Craft 16.6 is as Capetonian as can be. One look at her and there can be no doubt as to her origin.”
That was almost 18 years ago, and as I again looked at the photographs contained in that boat test, I remembered afresh why I made those comments. The very high console with its spray breaker stamped the “Cape of Storms” look to a hull which had been strongly influenced by the conventional Natal mono design of the period.

How did this design come about? Well, Gus Giraudeau, who had owned Acecraft in Durban, had sold and moved to Cape Town. There he became involved with Ski-Craft and introduced into this range of craft a monohull design that he knew worked, whilst adopting the more weather-resistant console structure and a deck layout, a design more practical to the more commercially orientated angling of the Western Cape.

After arriving in Cape Town from Zimbabwe, Chris Teer purchased the company and continued to produce the Ski-Craft 16.6, and to this day this model still sells like hot cakes. 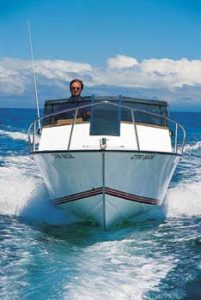 General Impressions
As I said in my review on the Vision 24 in the previous issue, Chris only redesigns for a specific purpose — to revise where he can see an improvement is needed. What works, he leaves alone.

Over the last ten years or so, I have seen the Ski-Craft 16.6 remodelled several times, but the latest revamp really excited me and had me smiling. Indeed, I was smiling because she’s come almost full circle: the current top deck console configuration, for all intents and purposes, now looks like the Natal consoles of the mid ’80s. The major differences are the current styling and innovation of moulding the entire top deck as one unit, and the “rounding off” within the design features.

Conditions for test
As the series of tests and reviews were undertaken over two days using Gordon’s Bay harbour as a base, I was exposed to various strengths of a north-westerly wind followed by a south-easter that continued to gain strength throughout the day. It was blowing about 20 knots when the four craft I had played with were back in the marina and the fun part of my job was over.

Launching and trailering
Chris’s philosophy is that you build a trailer to suit the requirements of a particular boat owner. After all, there’s no need to build a heavy-duty Sodwana-type beach launching, breakneck trailer if the client plans to launch and trailer his craft solely from Gordon’s Bay. In this instance, a much less expensive, lighter-weight trailer, designed specifically for slip launching, was used for the test craft and proved to be both practical and functional.
Chris also claims that his boats can be launched from and reloaded on the trailer by a husband and wife team. This is an interesting idea and brought to mind many scenarios.

In fact, Chris will only hand over a new rig on the water after getting the husband and wife to undertake the launching and retrieval exercise in his presence. By doing this, he’s adamant that the boat will become a family pleasure boat and not just another fishing boat. Chris and I managed to launch and retrieve three craft on both days without mishap or altercation. The trailer worked extremely well.

Motors and controls
Aquamall in the Strand is the biggest Mariner dealer in the Cape, so guess what … a pair of 60hp Mariner Big Foot motors were the source of power for the Ski-Craft 16.6 Walkthru. I had plenty of time — both while watching this craft perform in various sea conditions, as well as skippering her myself — to appreciate the thrust which these two motors provided for the craft.

The throttle/controls were comfortably positioned, even when executing tight manoeuvres, and the transfer through to the motors was smooth as well as direct.

Chris had fitted a Teleflex cable steering to the craft — the one with no feedback of motor torque — and it was the first time I had tried this steering system. Being able to let the steering go and not have the craft turn due to motor torque — as well as not having to constantly fight the torque — proved to be a big advantage. This, combined with the directness of the steering, makes this system ideal for small to mid-range ski-boats. 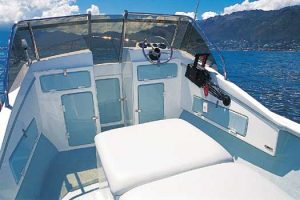 Handling
Nostalgia, perhaps, is the word I need to describe the first time I boarded the Ski-Craft 16.6 Walkthru. I think it’s fair to say I haven’t been aboard one of these craft for a good many years, but the feel of the monohull over water rekindled a wealth of feelings and emotions. On board this craft I once again experienced the feel of the original Acecraft Sea Lord I had built which incorporated the reverse chine strakes and pronounced raked bow so similar to the Ski-Craft 16.6.

In fact, it’s quite amazing how quickly I relived “that feel”. It’s not surprising, therefore, that I felt very much at home on the Ski-Craft 16.6 after taking the wheel.

As with most things in the Cape — including rugby — the sea is different to that in Natal. I have always believed this is true whether one is playing about in False Bay, heading out into the deep off Hout Bay or rounding Cape Point. Perhaps it’s the prevailing wind against or with normal swell movement that produces the difference, but there certainly is a difference.

I felt this in the first long run I did with the Ski-Craft 16.6 which was directly towards Cape Point with the south-easterly wind blowing on my port beam. The swell was long, lazy and slow, resulting in an interesting ride.
The craft would ride beautifully for quite a distance before a combination of sets of chop over a rising swell would cause her to start lifting her bow, resulting in a pound as she returned her shoulder area back into the sea. This hull was never the softest, but with the aid of motor trim I was amazed to find that the vast majority of the pounding could be obviated with a slight adjustment. Oh how I wish we had had trim-tilt motors in the old days, especially considering that our traditional run here in Natal is into the chop or a direct run with the sea.

Inherent in the hull design is also the way the spray is flattened out as the craft speeds over the water. This spray seldom gets blown back onto the boat, thereby making this boat extremely dry, another favourable characteristic I well remember from the good old days. Interestingly, these are two points I commented on in the original test, and I only reread my remarks of 1984 after I had completed this review.

In a following sea I noticed a vast improvement in that, with trim-tilts, a skipper can marginally lift her bow for a long run home with the wind and following sea.

In years gone by, racing down a big swell made me a little wary of the slight tendency to yaw. However, with the Ski-Craft 16.6 I did my best to see whether this characteristic still manifested itself in the boats of today. Good news: she doesn’t. Well, not unless I purposely trimmed her motors right in, forcing her hull to work the water at a much lower trajectory. And who ever said trim-tilts were superfluous?

It’s hard to describe the ride and natural stability of this craft and her acceptance of big loads of either crew or fish — or both — other than to say that I doubt the commercials of the Western Cape would have made this craft their No.1 choice if it didn’t fulfil these important criteria completely. 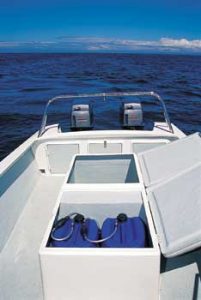 For us sportfishers, perhaps full hatches and weight-carrying capacity are but wishful dreams, but the inherent stability and seaworthiness under all conditions is of great comfort when the wind comes up unexpectedly and the run back to port is long. I also found that, during slow and fast trolling speeds — especially in cross sea conditions — this stability and dryness was a big advantage.

In a final walk down memory lane, I told my crew to hold on as I was going to throw the craft around in a manner it was unlikely to experience in Cape waters.

As I said, if it’s to go through the surf it had to be able to turn, and turn fast, and be quick out of the hole. I knew the craft would perform excellently as I had done this exercise many, many times before in the surf off the Natal coast with an almost identical hull. It’s also great fun! The Ski-Craft 16.6 Walkthru was great, proving and confirming to me just how good this hull is in the surf.

Deck layout
The strong influence in the Cape commercial market, which used to show in the Ski-Craft 16.6 and its overall layout, is no longer evident in the recreational offshore craft I tested.

A total revamp of the deck layout and styling has produced not only a much better looking craft, but one which is a lot more user-friendly.

This model Ski-Craft is no longer “net sommer ’n skuit to get to the snoek grounds”, it’s a sports craft any recreational angler would be extremely proud of and would love.

But the Cape influence in the size of the fish hatch is still there — it’s big, and it’s situated aft of the fuel hatch in a large coffin-type configuration. Another improvement is the forward console and walkthru/windscreen design which is now nicely styled and practically finished to provide lots of stowage, as well as easy access to the anchor hatch.

The high gunnel of this Ski-Craft offers lots of protection and support, and this carries on to a full transom.
All in all, this is a craft styled on wisdom born of years and years of experience of meeting the needs of the owners of the Ski-Craft 16.6. 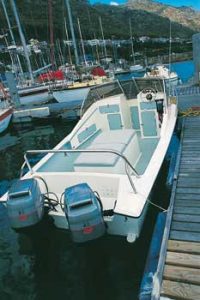 Finish
The Ski-Craft 16.6 Walkthru is clean, neat and pretty to look at, but her looks are not only skin deep. First and foremost, she is a solid boat with the basics built to withstand the rigours of the commercial market.
Secondly, the philosophy of durability prevails in all the added extras, both in the mouldings and hardware.
As they say, when in Rome do as the Romans do. The deck finish, while suitable and practical for Cape waters and gumboots, does not do justice to the craft. A carpeted deck would be a nicety to really finish her off.

Conclusion
Any craft that’s been around for the length of time that the Ski-Craft 16.6 has, and has sold so many units, must be good.

With the revamp and restyling to appease the recreational angler, this craft will no doubt become more popular in our market where durability, good sea handling, easy towing and a lot of deck space for fishing are becoming more and more sought after.