LEISURE PLEASURE — A boat for all reasons 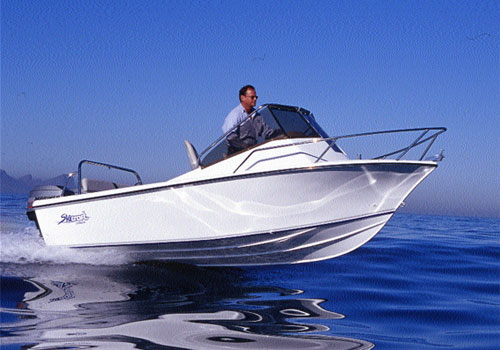 “I HAVE a craft with a difference for you to play with,” boomed the ever-enthusiastic Chris Teer, MD of The Aquamall in Somerset West. “It’s the SkiCraft Leisure,” he continued, and proceeded to explain why this craft was verging on being revolutionary in the offshore leisure and fishing boating world.

“Hold it,” I interjected, “this will be the third or fourth time I’ve tested this hull. How different can it be?”

“Very,” he retorted.
This 16’6” SkiCraft hull has been around for close on 30 years. It has the distinction of not only being the most popular craft ever built in South Africa, determined by numbers sold, but has also found acceptance both in the recreational sportfishing scene as well as amongst the commercial linefishing fraternity.

I have ridden on and tested her in big seas and calm seas off Durban and in the Cape of Storms, and she has always come up trumps.

Having determined that the hull was basically the same, I again queried the necessity for re-testing “the old girl”. However, Chris wasn’t saying much at that stage, but was insistent. It’s always a pleasure to visit Cape Town, so I gave in to his request — and I’m certainly pleased I did.

I arrived on a magnificent mid-winter’s day — no rain and no wind in the midst of a three week period when the TV weather chart showed nothing but clouds, rain and wind. It was ideal for testing a leisure craft.

In essence, Chris has given “the old girl” a complete revamp, retaining only the basic hull design. In the process he has combined the performance capabilities of this hull with modern day technology to redesign the top deck and helm station cockpit areas and motorwell. All this fits into a new generation structure that is moulded in one piece. Then it is coupled and laminated to the hull once the hull has been filled with foam. 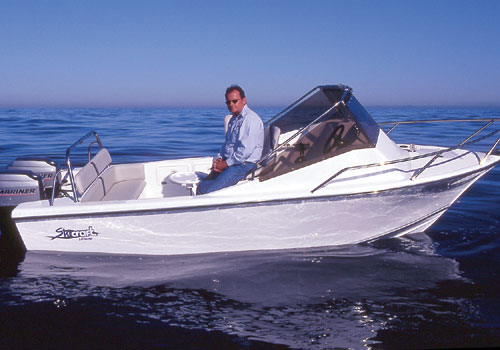 Using this technique and the latest technology in GRP lamination, he found he could produce an internal and gunnel deck mould that not only comes out blemish free, but also incorporates all the niceties required on a craft of this size. The SkiCraft Leisure has a gelcoat finish that looks perfect and does away with all the extra sanding and filling usually required to get a craft’s internal finish to the standard Chris required, without resorting to carpeting the deck and internal sides of the craft.

However, there was an even more radical departure from the previous generation of SkiCraft, and that was moving the centre of gravity a lot further forward by relocating the fuel tanks to directly below the skipper’s feet. This built-in fuel tank is also extra large — 115 litre — to ensure maximum capacity.

Considering all this weight is upfront, as was the combined body weight of Chris and I, one would expect the craft to become nose-heavy. Not so. This is because the torque of the twin Mariner 60hp BigFoot motors — adjusted with her trim-tilts — holds the bow in the optimum position during out-of-the-hole acceleration as well as high-speed running.

Due to all these modifications, the cockpit has become large in overall dimensions, enabling the practical implementation of a “conversation-pit” or “party-pit” on a craft this size. With her upholstered back seat (that comfortably seats three people) and the two upfront swivel chairs, all five of the people aboard — this craft can be licensed for five crew — can sit around a central standing drinks and snack table.

This is where the “leisure” in the SkiCraft Leisure’s title comes into context.

It is Chris’s firm conviction that unless a sportfisherman’s family can derive practical benefits from a family craft — other than fishing — there is little chance of the head of the household realising the dream of owning his own offshore fishing boat. 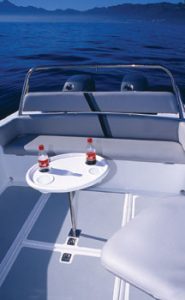 In a nutshell, the wife and teenage daughters must feel excited to join daddy on his “yacht” anchored off Clifton Beach during the hot, heady days of the Christmas festive season, sipping champagne, soaking up the sun’s rays and risking a swim in the cool water without the usual “Get real, dad, I wouldn’t be seen dead on your stinky little fishing ‘skuit’ off Clifton.”

Through her facelift, the SkiCraft Leisure has also become a lot more racy, sporty or pleasure-boatish than the fishing boat of old. She’s designed for family boating on Saturday and serious fishing on Sunday — a boat for all reasons.

The SkiCraft Leisure is also ideal for wakeboarding and waterskiing. Two very important aspects come into play when a craft is slipped into a dam for these purposes — looks and the wake that’s produced. In this game one has to compare with some very fancy looking speedboats, and if you think your son or daughter or their friends will let you drag them around on a fishing skuit, you are living in the old days.

While Chris tried to explain about the requirements for wakeboarding, slalom skiing and barefooting — the wake table, wake edges and their shape etc. — I began to realise what makes one boat better than another for this sport. What’s more, based on his explanation, I could see that the SkiCraft Leisure throws a wake that appears to fulfil the criteria. Chris’s son, Devin, a very experienced, competitive wakeboarder, assured me the SkiCraft Leisure is all that its cracked up to be when you are at the tail-end of the rope.

On the day of this review, False Bay was at its stunning best — a mirrored surface over a small ground swell. However, during the time I spent aboard the SkiCraft Leisure, the predicted south-easter began to blow. For the last hour or so, therefore, I had a small chop over the ground swell in which to give her a full workout in her new configuration.

I had thought that the 16’6” monohull of the SkiCraft could never be improved upon, but I have to admit Chris has done just that. She now has a much softer ride and, by using her motor trim, one has the ability to adjust her ride to suit all sea conditions.

This trim facility plays a major role in her handling. Her performance is determined by the out-the-hole acceleration and torque of the Bigfoot 60 Mariners. Then, once on a plane, limited bow-up trim gets her flying across the water in a soft, stable ride. In a beam sea, marginal — and I really mean marginal — lateral trim is needed to counteract propeller torque as well as sea and wind effect on the hull to ensure a very stable ride. 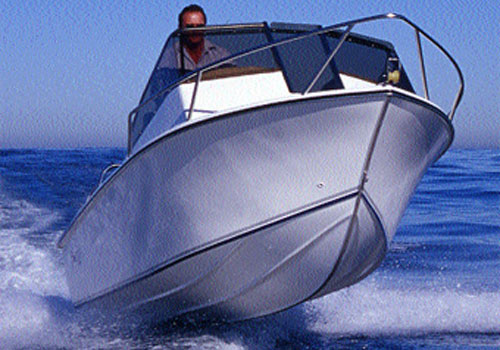 Into the sea one would expect to feel a fair amount of porpoising due to the forward weight being countered by prop torque, but this did not happen until I overdid the bow-up trimming of the motors. Conversely, with the motors trimmed correctly, she sliced into oncoming crests, using her sharp “vee” bow to good effect.

Running with a following sea she did, however, need fairly substantial bow-up trim to avoid yawing or snaking from excessive bow-downward thrust.

This craft has always been able to turn on a ticky and has a notable reputation for her ability to handle rough surf. With her trim set just above full tuck-in, there was no mistaking her pedigree. Her turns were tight and pulling her out of the turn and taking off to take a break was superb.

I tested single motor operation with each motor — both dragging the dead motor and lifting it. She planed well during all permutations. With one motor tilted — either one — the craft cruised at over 20 knots, and that without the throttle lever pushed to sunset.

In this review the major aspects of her new deck layout are very important and call for detailed descriptions.

In his planning Chris had to accommodate the requests of many different user groups if he was to achieve his goal of making the SkiCraft Leisure a true boat for all reasons.

One of Chris’s main aims was to have space and facilities to tuck away all the fishing-related equipment and crayfish nets so that the transformation from fishing boat to leisure boat was not a big job for Mr Skipper. He’s certainly achieved this, because it’s just a case of closing hatches and erecting the swivel table on a stainless-steel post amidships (this post doubles as an emergency steering pole) and the transformation is complete. All the offending fishing apparel is tucked and hidden away. 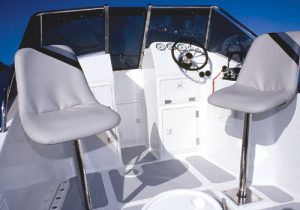 Rounding off any sharp edges and designing the helm station, walk-through and non-skid surfaces to be both practical and stylish took a lot of thought and applied knowledge of a boater’s requirements, but these too have been well done.

Here are a few examples of well thought out designs that work in the practical application:

• The livebait well in the aft of the motor wells is insulated so that it will keep cold drinks, beer and even champagne chilled to perfection, if so required.

• The deck’s non-skid surface will be great for the gumboot brigade with tuna blood running thick, as well as for the warm-water brigade with bare feet.

• A deck that is slightly convex at the sides ensures any water is quickly drained off and out through aft scupper tubes.

• The large centre fish hatch is big by normal standards, but an above-deck hatch with an upholstered top can also be fitted to increase carrying capacity for the tuna boys.

• Looking at the numerous cupboards and hatches built into the top deck, I initially thought there would be a cacophony of rattles and other noises to contend with, but Chris has located a new style of hatch clip that ensures that the cupboard doors close very tightly, are splash-/spray-proof and don’t rattle. These simple catches, I am told, passed a 15 000 open-close quality test.

• I found the helm station very skipper-friendly, with the windscreen well positioned and the steering comfortable and at a good height. The binnacle mounted throttle controls were also great once I got used to having the trim buttons all on one lever.

• Under the rear upholstered bench seat there’s a big open space for storage. Even the big kreef nets or drinks table can be stored out of the way.

Chris’s constant goal is to have high quality finishes, and with this craft he has hit the bull’s eye. The SkiCraft Leisure is extremely well finished in all the aspects I noted. It’s hard to see how he will be able to better the quality of the craft he now produces even once his new factory — currently halfway built — is in operation.

I am very pleased Chris persuaded me to play with the SkiCraft Leisure, because I managed to prove to myself that his new concept of using forward weight and motor torque to balance the craft really works well. This design has resulted in a spacious deck for the size craft, and thus an extremely practical boat for leisure purposes. She truly is a craft for all reasons.