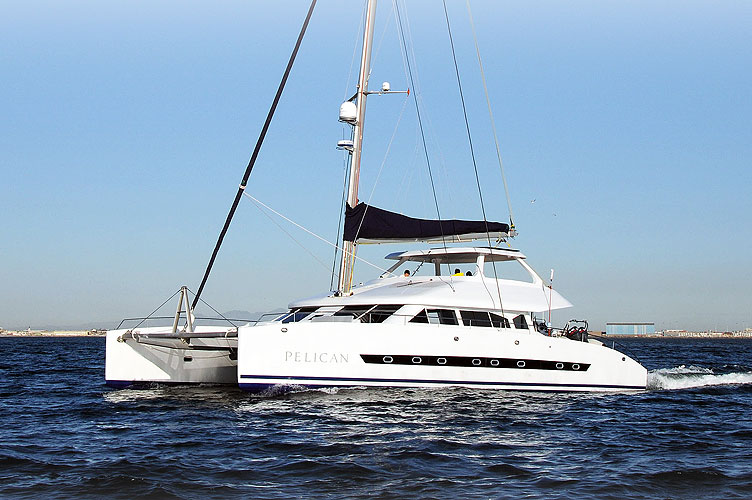 A 5 STAR APARTMENT ON THE OCEAN

LYING at her moorings at the Royal Cape Yacht Club, Pelican presented a stunning picture in the late afternoon sun. My first sight of her had my heart racing for two reasons: firstly, the large and stylish craft lying proud in front of me was unbelievably impressive; and, secondly, this beautiful 63 foot craft had been custom-made in Cape Town by Mark Delany and his team from Two Oceans Marine, and I was very proud of their achievement.

Designed by Du Toit Yacht Design, Pelican is the largest of the nine custom-built yachts that Two Oceans have constructed alongside their Magnum range of offshore fishing craft which have been very successfully marketed in South Africa and many other countries in Africa.

Before anybody shouts, “What is Bursik doing reviewing a craft powered by wind?” allow me to categorically state that throughout the review the sails stayed firmly furled on their respective boom and stays. I relied totally on the two 165 Yanmar diesel motors that have been installed as auxilliary power on Pelican to power her within the precincts of Cape Town’s Table Bay.

During the last decade the “power cat” concept has blossomed and has captured a strong foothold in the offshore boating market, both for cruising and to provide offshore fishermen with a different platform from which to practise their sport. These craft are being practically used for the full ambit of sportfishing, from fly- and light tackle fishing right up to serious marlin fishing. During both the 2010 and 2011 SADSAA Columbia Billfish Classic tournaments, the power cat Trinity achieved an impressive second position overall, in addition to the productive social marlin fishing she has enjoyed off Richards Bay.

Mark Delany therefore reasoned that it was logical for me to review Pelican, whose owner is a very keen offshore angler and is planning to cruise Southern African waters from Moçambique to Angola in this craft. These rich and varied fishing waters will open up a multitude of angling opportunities for those aboard Pelican. 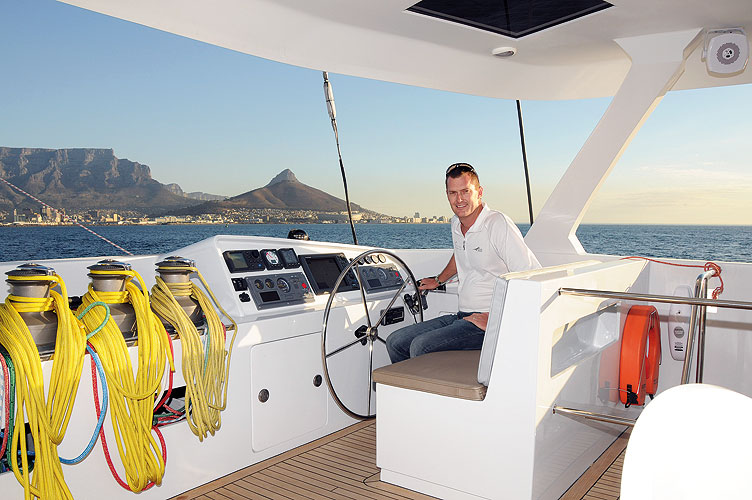 Furthermore, as it is estimated that up to 80% of this type of craft’s operation is by motor power, I feel totally justified in undertaking the task of reviewing the Open Ocean 630. To be brutally honest, an opportunity to ride on and skipper this magnificent craft was not one I was going to pass up.

This craft encompasses a vast amount of the owner’s personal requirements and ideas, in addition to the designer’s concepts. As with all custom-built craft, it’s that strong personal stamp by the owners that flows throughout the craft and which adds so much to the final product. In this case, it’s a home-from-home, with all the comforts and sporting equipment. This ensures that those holidaying aboard her can arrive at an exotic destination and have at their disposal all the equipment, facilities and toys they require to experience the holiday of their dreams. 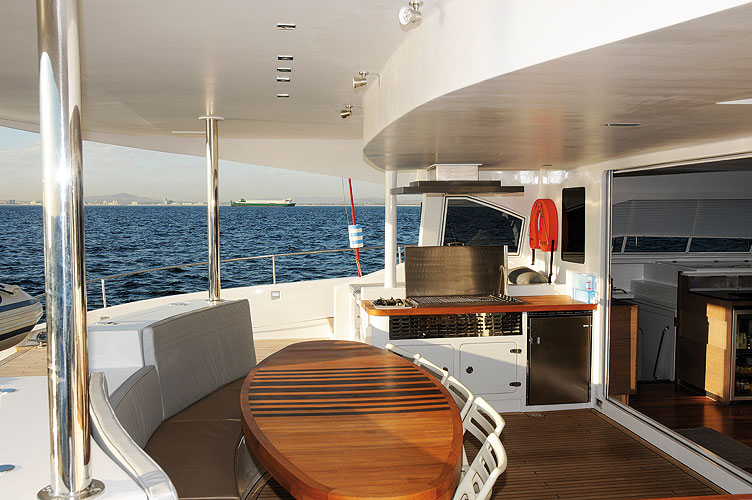 Climbing aboard Pelican’s large aft deck immediately made me aware of the size of this craft. As big as she looked from the jetty, the overall magnitude of this craft is only truly appreciated once you’re aboard. So much to see, so many corners to explore, so much to assimilate. At the same time, I was trying to imagine what it would be like to cruise and fish around an archipelago such as Bazaruto aboard this craft — all this before we’d even left the moorings.

For once Cape Town weather was good to me and provided a clear sky, a light westerly wind and a perfect Table Bay in which to spend a late afternoon aboard this incredible craft. After photographing her under ideal conditions, I boarded her a second time to experience the Open Ocean 630 at home on the ocean.

The other Open Ocean custom-built yachts from Two Oceans Marine are sailing extensively in the Indian Ocean as far north as the Seychelles and have had to face the unpredictable seas that we all know occur south of the equator. In high seas as well as the flat waters of the tropics, these craft have proved their seagoing capabilities, as well as providing the comfort they are designed for.

I experienced her ride in calm conditions in Table Bay, so I cannot comment on her rough sea capabilities. I have, however, chatted to her captain and have, over the years, overheard numerous favourable comments from those who have skippered other Open Ocean cats manufactured by Two Oceans. Pelican’s captain says he was ecstatic about how this craft handled both under power as well as while sailing during a number of sea trials they undertook in some in seriously rough Cape conditions, prior to her official handover to the owners.
Having discussed her performance, I was now able to explore all the onboard facilities and designed niceties, and compare this craft’s features with those of other power cats and yachts on which I have enjoyed extended outings in some exotic locations. 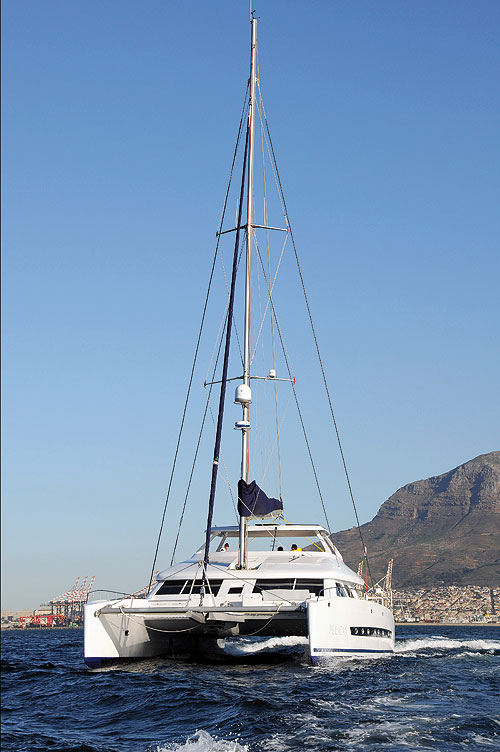 First and foremost, the size of this craft, all 63ft of her, gives her a head and shoulders advantage over the other craft on which I have explored the Southern African east coast. Her spacious internal design and the room at one’s disposal, both in the living areas of the main saloon — and even more so in the living quarters situated in the huge sponsons — is simply wonderful.

On this craft one has to refer to bedrooms and bathrooms, for that’s what they are. No, not “cabins” and “heads”, the generally accepted terminology on yachts, for the simple reason that the latter are generally small in size and cramped. Boat builders try to get away with saying, “They are only for sleeping in.” However, during my extended stays at sea aboard similar craft I have always felt that the less confined the living quarters are, the more I enjoy the whole experience.
Speak to any woman who has spent time aboard this type of craft. Without exception, the main topic of criticism and/or praise is the onboard bed/bathroom/toilet facilities. On board Pelican there will never be dissatisfaction in this regard.
The internal saloon area — galley, dining/bar area and lounge — is spaciously designed with tremendous almost 360 degree visibility. From my experiences on this style of craft, it is the aft deck relaxation and play area that is most used. Whether the craft is underway or lying at anchor, it is the area that is the most stable and most protected from the weather. It provides the open, outdoors feel that makes such an experience so special.
On Pelican this area is substantial with a 12-seater table ideal for both dining as well as relaxing. In my case it would be a great tackle prepping station where you could “work” while talking and sipping a few cold ones.

At the back of the aft deck there’s a semi-rigid inflatable, powered by twin 70hp motors and fully rigged for light tackle gamefishing. She rests on a substantial cradle, ready to be lowered onto the ocean by means of an electric winch and a pulley system at the end of the craft’s huge boom.

Also in this area there’s what I call the “toy locker”. It holds fishing tackle, boating equipment and scuba diving kit — everything you need to keep family and friends occupied and entertained for an extended holiday on the ocean. 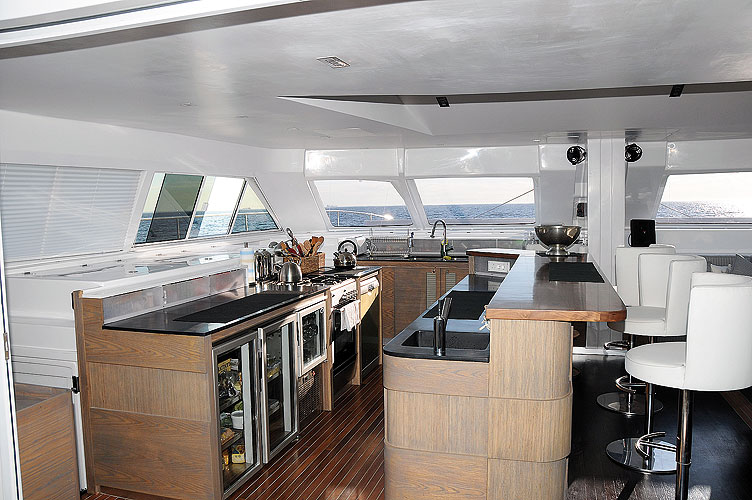 The flybridge/upper deck level is almost as large as the saloon area. In addition to housing the upstairs helm station, plus all the winches and ropes required to sail this craft, it hosts an additional lounging area.
The instrumentation and electronics in the helm station, the main saloon and interlinked to the helm station on the flybridge lacks nothing. Everything is very impressive, providing the captain with every piece of equipment he might require for long distance sea voyages.
The twin 165hp Yanmar diesel motors that power this craft are not only used for long distance cruising, but often also add to the forward momentum while the craft is under sail. In saying that, Pelican is designed to travel at about 9 knots with no sail and one motor operating at 2 700rpm. This provides for maximum fuel efficiency from the 1 500 litres of fuel the craft carries. Surprisingly, with two motors both running at maximum revs of 3 600rpm, she will average a SOW of marginally in excess of 12 knots.

Pelican is indeed a very special yacht — a craft that dreams are built around and a craft that is the proverbial seaside villa for the owner’s family. The best thing about this villa is that she can be moved to almost any destination in the world, thus enabling her owners to maximise adventure, travel, fishing and holiday relaxation to the nth degree.