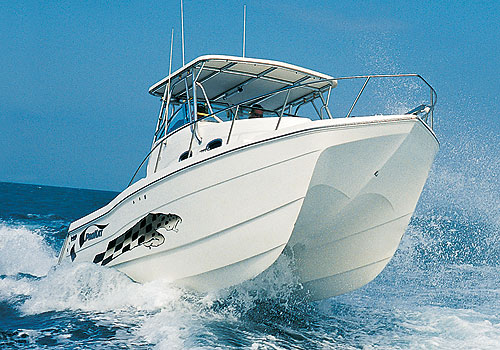 A GOOD LOOKER WITH PERFORMANCE TO MATCH

EACH year we see numerous changes in designs and technologies in all areas of the boating and fishing industry — the majority being for the better. From the locally manufactured craft to the imported versions, from the smaller Ski-vees up to the biggest sportfishers available, the modern look is rapidly taking over, and the new generation boats just seem to get fancier and fancier by the day. By all accounts. style and comfort are definitely becoming more important to those investing in boats nowadays. 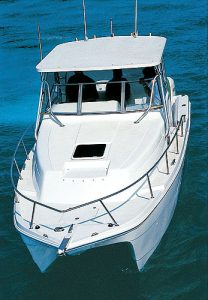 Once again the Lindhorst team from Broderick Sports have come to the party. They have imported two such modern craft, namely the ProKat 3660 (reviewed elsewhere in this issue) and the ProKat 2660. When I first saw the 2660 on the water, I was quite intrigued with the design and look of the boat. What immediately grabbed my attention was the change of style on the bow: it tapers to a single point, giving the impression of a monohull from the side view. A very sporty look, indeed, and one which I liked very much.

These new generation boats have all the new mod-cons available, from beautiful fittings to electronically-aided systems, and although they obviously do add to the price, they certainly make the operation of these craft far smoother and simpler.

Watching the 2660 performing was interesting, as my initial perception was that the hull might roll a fair bit once we were offshore. She looked as though she might be top-heavy because of the built-up console and cabin area. Justin Lindhorst was at the helm, and as he proceeded to take the 2660 out to sea through the harbour mouth, I carefully scrutinised her ride. Well, judging by her incredible performance, I was obviously wrong about that aspect.

I finally managed to boat hop from the 3660 onto the 2660 to get my hands on her helm. A gentle forward press of the electronically-assisted (fly-by-wire) controls shunted her onto the plane with amazing power. Her dual 250hp Evinrude E-Tec motors give phenomenal power to this sized craft. I’m quite sure that smaller motors would be sufficient, but in my opinion slightly overpowering a boat is definitely better than underpowering. 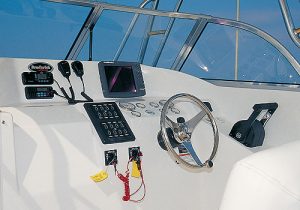 The new electronic fly-by-wire systems are ultra-sensitive to touch, so it is necessary to give yourself some time to get used to operating them as they are very different from standard control boxes with cables. Setting her up to suit the conditions was fairly simple once I had got used to the controls. With the trims set down on the motors, it only took some fine tweaks on the trim-tabs to get a good ride going.

Since the conditions for the day were reasonable with a brisk south-westerly blowing up, I ran her up toward Umhlanga Rocks to see what her handling capabilities would be like with the wind and following sea. Pushing the 2660 up to 25 knots SOG, she cut through the water with ease, holding a good, comfortable, stable ride. Even when I edged her up to 30 knots, it was still simple to keep control of the boat. To be able to maintain a constant speed of 20 knots is good going, especially in rough conditions.

After spending a fair amount of time running up to Umhlanga, I backtracked and ran back to Durban directly into the swell and sharp south-westerly chop. In most boats, under these circumstances one would expect to be bumped around and to have to ease right back on the throttles to compensate, but the 2660 again gave a good ride. By tapping off to an average SOG of 18-20 knots and by fine-tuning the trim-tabs and motor trims, a speed of 25-30 knots could be maintained.

I did, however, find that one has to work a bit more on the control of the boat under these conditions. Then again, driving at that speed into a strong wind is not really necessary, but it’s nice to know that you can if you have to. Even cutting across at all angles to the south-wester, the boat’s good ride stayed constant.

On any craft you have to expect some spray to come over the front at one stage or another. What appealed to me was the windscreen section which gave good protection from the wind and spray, as well as being in the open air at the same time. For the really rough days you can add on clears for complete protection.

Manoeuvring a craft of this size can sometimes be fairly difficult, especially in rougher conditions. However, fitted with the 250 E-Tecs, she was ultra-responsive and sensitive when turning at high speeds. This could take some getting used to, as she held tight and level on the turns, instead of banking onto the inner sponson. I found that the ProKat 2660’s performance was sharp and responsive in all areas at higher cruise speeds, and with everything precisely fitted and laid out, driving her was a pleasure.

When I eased off the throttles to check her handling at simulated troll speeds, the 2660 was again very comfortable. In all directions to the swell and chop, the effort needed to maintain constant speed and track was minimal while operating at a slow troll speed of 4-5 knots and up to 8-10 knots. At these slower speeds I expected the hull to roll slightly, but found that it was no different to other craft of this size.

Another important aspect of handling that I checked was backing-up. The extra power behind her made backing-up fast and simple, and as the 2660 sits high out of the water, this prevents the transom area from swamping easily. Justin Lindhorst is well accustomed to these craft and had her backing up and spinning on a ticky really fast. Aspects like these can mean the difference between landing or losing a billfish. 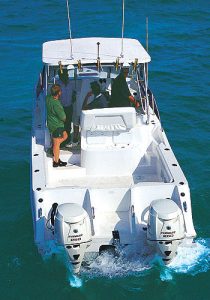 The 2660 boasts an impressive layout that has been designed to suit the serious fisherman as well as the boat owner who just enjoys cruising. What appealed to me is having a cabin section. This area is quite spacious, is well ventilated and can be converted from a seating area into a small sleeping area. For the family man this is great, because when the kids are bored of the fishing — or if someone is feeling a bit off-colour — they can utilise this area without you being forced to pack up and head for home. If the family and/or crew are happy, you get extended fishing hours.

It obviously was quite comfortable in there, as Wayne, the technician for the boat, disappeared for quite a while to download pictures from his camera, this while cruising at fair speeds during the testing phase.

Another area that is well laid out is the console area which is raised from the aft deck. Being elevated like that helps when spotting billfish and simplifies control of the boat, especially when you have to back-up onto fish. A solid T-top complements this area, creating shade and serving as a rod stowage area.

The step-down area in the stern is also fairly spacious, has nice high gunnels, and would be well suited to marlin and tuna fishing. Just add a fighting chair and you have it all. Another feature that’s good to have is the removable transom door. This again is necessary for marlin fishing, but can also be used as an easy entry or exit area for divers with the addition of a ladder system.

Although the 2660 has a cabin section, you can still access the bow area via the walkaround sides which have a high bow-rail starting from midships. The bow area on top of the cabin is spacious and would be suitable for casting or spinning from, or as a good tanning area for the ladies. 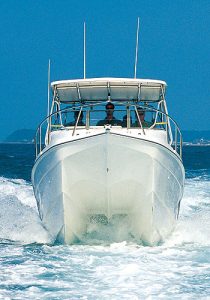 Not only does the 2660 boast good looks, but she is also the type of craft that is very versatile. At 27ft long, she is a large boat, but is still towable if you have a decent vehicle with enough power. Launching and trailering would be possible from protected beach launch sites like Sodwana Bay.

With the addition of a few extra fishing mod-cons, you could easily transform the 2260 into a craft that suits your style of fishing. I know that I would be very happy to spend a full day at sea on this boat, even in not-so-favourable conditions.

At the end of the day, if you are looking for a cat that has stylish, modern but classic looks, and is versatile, the ProKat 2660 is definitely worth a look and ride. You may be pleasantly surprised at what she has to offer. Great looks and good handling are what the 2660 is all about.