ALL YOU NEED, PLUS MORE … 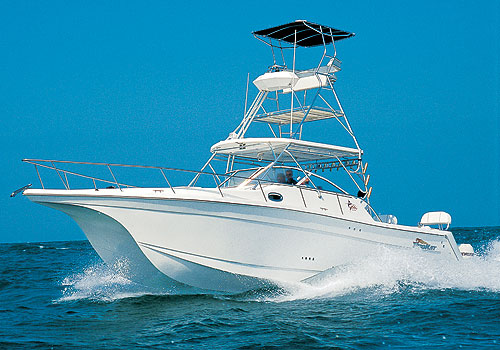 THE first time I actually saw the ProKat 3660, she was powering down the Maiden Wharf channel in Durban’s harbour. Impressive indeed!

While waiting at Wilson’s Marina, I watched Tony Lindhorst bringing the craft round from the Bayhead yacht lift where she had been lying since her arrival in Durban from Alabama in the United States. By the looks of things, Tony was enjoying having the ProKat 3660 all to himself before I got aboard to take over the helm and have some fun playing with this 37ft Express model craft.

Tony explained in detail that Broderick Sports had been appointed the ProKat Agents in Southern Africa, and now had the first 37- and 26ft models on the water. In addition to Tony’s impressive accounts of these craft, I did a little homework on the ProKat myself. The results of my research, along with the photographs and boat reviews in American magazines, fired up my enthusiasm to see for myself just how wonderful these craft really were.

Driven by twin 250hp Evinrude E-Tecs, the ProKat 3660 made a powerful impression on me when I first saw her up close and personal at her moorings. 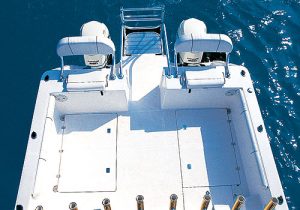 In many ways she is quite different from all the big cats I have reviewed, and at certain angles she almost looks like a conventional sportfisher. Her extended bowsprit and her prominent bow-up stance with her stern “tucked in” during high speed work give her this appearance. That is, until she begins to quarter towards one and the telltale shadow of the second hull begins to make an appearance.

She certainly is a cat, though, as I was about to experience in the rather rough westerly-driven sea that was waiting for us outside the confines of Durban’s harbour.

As we made our exit from the port, Kevin Smith and Justin Lindhorst — Tony’s son and proprietor of Boatsonline — followed us on the ProKat 2660 that Kevin was due to review.

So, on this auspicious occasion, the first two ProKats in South Africa made their way out into the Indian Ocean to face but a sample of the rough seas that this ocean is known to throw at offshore boaters. What’s more, I was aboard to experience it.

Before we got out into the rough stuff, I crossed to the ProKat 2660 within the calm waters of Vetch’s Pier to photograph the ProKat 3660. During this period I had a lot of time to view this big craft’s hull-over-water performance while Tony threw her around as if she were a ski-boat. He drove her so fast and so close to us on the smaller ProKat in the prevailing rough sea that there were times — especially when looking through the viewfinder of the camera — that I became quite nervous.

I remember marvelling not only at her ability to manoeuvre, but also at how very stable and controlled her ride appeared to be. It was this aspect of her performance that I was looking forward to experiencing when I was back behind her controls.

In this current era of offshore boating where modern technology in big outboard engines is enabling fuel consumption to approach that of diesel inboard engines, one option is for bigger craft to use twin outboards as their power source. While this is not the time to debate this complex issue, outboard motors do offer a number of advantages to the recreational sportfisherman. Among these are the lower initial capital outlay, a simpler upgrading in knowledge from ski-boating, as well as simpler and quicker repairs or replacement of an engine should problems arise.

As a result of these factors, we are seeing more and more models of outboard-driven craft in the 25-35ft bracket coming onto the market, thus enabling many more anglers to pursue bigger fish further out to sea. The ProKat 3660 is at the very top end of this sector, and I must admit that I was very surprised at the performance generated by twin 250hp outboards on a craft this size.

In comparison, the ProKat 2660, a smaller, trailerable boat, was also powered by twin 250 Evinrude E-Tecs. Yes, when it came to acceleration there was an obvious, marked difference, but at the top end the difference was not that significant, especially if speed was not one’s primary objective.

With all the photography over, it was time for me to take full command of the ProKat 3660 and concentrate fully on her feel as I put her through a full spectrum of performance manoeuvres, to compare these findings with the expectations I had gained watching her perform from the other craft.

First and foremost, I needed to get the feel of the multiple trimming options available on this reasonably big craft, as she is equipped with hydraulic after-planers in addition to the trim facilities of the counter-rotating Evinrude E-Tecs.

With the “4-way” trim ability, I needed to ensure that the motors were fully trimmed down when I started. There were gauges on the instrument panel to reflect that the hydraulic trim-tabs were indeed completely lifted. All this would give me a measure of the craft’s inherent hull design ride.

After that, any adjustment to any of the trims needed to achieve a specific objective regarding the craft’s performance. And they had to be introduced carefully to avoid coflict in trimming with the four options at one’s disposal. Most of these adjustments are required directly as a result of prevailing sea conditions. Were it not so, then the hull design itself would be lacking.

Tony tried hard to tell me how to adjust the trims, but I ignored his advice totally. I have my own way of establishing the “sweet ride” of a big sportfisher, and top-end speed features very low on my list of priorities.

With the reasonably choppy sea on the ProKat 3660’s starboard aft quarter, I began a course into the north-north-east. Working through the gradually escalating speed curve, I simply absorbed the feel of the craft as she finally got onto the plane and settled at 3 800rpm which gave an SOG of 18/20 knots.

This craft was fitted with electronic fly-by-wire controls, and while they are total magic in their overall concept, they take a little getting used to if one is constantly using cable controls during general boating.

With the controls set, the course set and the sea relatively constant, all I had to do was play with the trims — all four options — to determine in my opinion how she maximised her ride. In this scenario, speed and comfort seldom correlate. With the ProKat 3660 I found she liked a slightly faster speed than most craft in her class to maintain an incredibly smooth ride in the running sea. 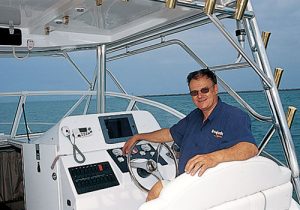 To confirm this, I brought her around and repeated the exercise heading directly into the sea. With both the sea and the wind hitting her full on the nose, I trimmed her bow down a fraction, gently edged the throttles up a tad and soon had her edging up to 17 knots. Sure, I tried her at faster speeds — the speeds Tony likes — and she rode very well, but I tend to feel sorry for the craft and those aboard, so whilst in times of necessity the boat can take the high speeds very well, it’s not my idea of pleasant boating.

Above all — and this extended to all the trolling and drifting trials I undertook — she is remarkably laterally stable. With her high, almost tuna tower helmstation, I noted whilst up there amongst the seagulls that she remained stable even when trolling in a full side-on sea. From way up on top, I revelled in the view Livingston (the seagull) and his mates enjoy while gliding and watching for fish. The view aft was spectacular.

Whilst trolling I tucked her motors right in and the tabs right up to minimise white water aft. This craft threw a surprisingly tight wake up to 6.5 knots. Up to 8/9 knots, kona speed for marlin, although the wake extended quite far aft, there was plenty of clear water available in which to set one’s lures.

Out in the really rough stuff it was only with the wind and sea on her forward quarter that she threw enoughspray for the wind to blow it over the windscreen of the helm station of this Express model. Clears are supplied for the rough weather stuff, but had not been installed in time for the review. Apart from this exercise when I specifically looked for spray, the rest of the review was undertaken totally devoid of spray, and I enjoyed the flow of air that the Express configuration allowed in the hot, humid conditions we were experiencing off Durban.

Running the ProKat 3660 in a following sea was effortless. Even though the westerly sea was not that big, I tried to get her to dig in a sponson by trimming her bow right down, but it seemed to make no difference.

Finally, I had to see how she backed up and side-slipped her transom, as if fighting a big fish. With tabs and trims up, she did well for an outboard-powered craft. For this exercise one has to learn to execute the forward/reverse routine with short, sharp powering which is made a lot easier with the electronic controls. 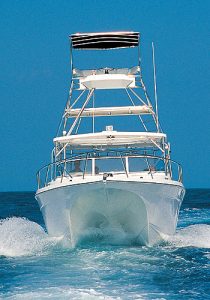 Designed largely to cater for the offshore fisherman, the ProKat 3660 has a large fishdeck with all the necessary facilities for light- and medium tackle sportfishing. Whilst no provision has been made for a fighting chair to be installed, I am led to believe that this can be arranged. Two fairly large underdeck fish hatches are provided, as well as underdeck stowage for general boating requirements such as mooring ropes, fenders, etc.

The main helm station is excellent, combining a comfortable skippering seat and a comprehensive array of instrumentation which is well positioned for practical use. The seat is higher than one would expect, but this gives the skipper a clear view aft over the heads of the crew sitting or standing behind him. Within the confines of the Express saloon area, anglers can rest in comfort while waiting for the action to commence, and when it comes, access to the fishdeck is quick and easy.

As is traditional with all Express model sportfishers, sacrifices have to be made in respect of saloon and cabin arrangements. As per the usual configuration, the galley, bathroom and sleeping areas are relegated to the “downstairs” forward bow area. Taking into account that this craft is a cat, space is even more restricted due to her tunnels. 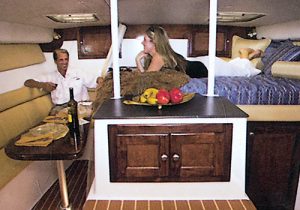 The ProKat designers have done exceptionally well with the space at their disposal, with every aspect designed and fitted to provide comfort and practicality for all the creature comforts of those aboard, not just for those fishing. Not only is the internal layout practical, but the designers have also ensured that areas such as the galley have been made to accommodate the demands of “those who must be obeyed” — the food and beverage suppliers.

Throughout my inspection of the ProKat 3660 I was very impressed with the overall finish of the craft, as well as with the numerous innovations in layout have which been included, and the quality of the finishings and hardware used.

I thoroughly enjoyed the time I spent on the ProKat 3660. I can see this craft as a practical and popular offshore sportfisher for those who want to upgrade from ski-boat fishing to hunting the marlin and big yellowfin tuna that are being caught more and more regularly off our coast. She provides all you need, plus more!