A BOAT OF NOTE 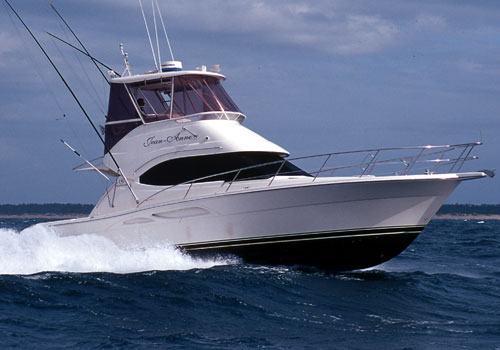 STEPPING from Costa Gigora’s lounge onto the veranda at his duplex on Richards Bay’s waterfront development, I stopped dead in my tracks. There before me lay the Riviera 37. She was simply stunning, moored on Costa’s private jetty, silhouetted against the backdrop of the Richard’s Bay Yacht Club’s marina.

I defy any person with a passion for boats to remain unaffected while taking in this striking scene of craft and these surroundings. A beautiful home, a private walk-on mooring and then the Riviera 37. How close can one get to heaven? Costa, I am unashamedly envious.

The Riviera 37 has an overall length of 43ft and a hull length of 39,5ft, with proportions to match that length. Where the 37 on the model name comes from beats me. She is a 40-plus footer in all aspects.

So this was the Riviera 37 I had heard so much about, and soon I would be taking her out of the Richards Bay harbour into a sea that was ugly by anyone’s standards.

First, though, I needed to board the Riviera 47 (reviewed in July/August 2004 issue of SKI-BOAT) with Capt Mark Jordin, her skipper, so that I could take photographs of the Riviera 37. Dodging rain squalls and attempting to find patches of sun in which to position these craft was not easy. A very strong south-westerly wind had been blowing for 24 hours and had really stirred up the ocean. When we set off it was still blowing at about 20 knots, which added a breaking top to the offshore waves.

Two craft thundering across this ocean surface was certainly a sight to behold, and it was even more exciting to be aboard one of them.

I have often pondered the “high” I experience when skippering or even just being aboard a craft of this size, and furthermore the individual bond one feels with the particular boat one is reviewing. Considering all the craft I have reviewed over the years, one would have thought the novelty of riding yet another one would have worn off by now. But, believe me, it’s still there, as strong as ever. No doubt, it’s a deep-seated desire to one day sit on a flybridge, turn the key, hear the drone of two big, turbo-charged diesel motors and feel the unequal thrill of a big hull working as she climbs onto the plane — and know that she’s my own sportfisher.

This excitement and the feeling of bonding with a craft are very personal, and regardless of the objectivity needed to do my job, a degree of individual bias must inevitably creep into the scenario.

I bonded beautifully with the Riviera 37.

After the photo session out at sea, and once back in the lee of Richards Bay’s southern breakwater, Derrick Levy, who imports these magnificent craft, inched the stern of the Riviera 37 towards that of the Riviera 47. Just before they were a fender width apart, I stepped from one marlin/swim platform to the other with ease. 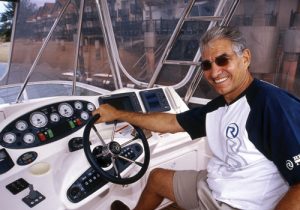 Once behind the helm of the Riviera 37, my fun was about to begin. With clearance from Richards Bay Port Control, I eased the electronic binnacle-style throttle controls forward, and with her prominent bow cleaving the troubled waters of the harbour entrance, began pitting this craft’s abilities against those of an ugly ocean.

Rev counters settled at 2 000rpm as I passed the end of the main breakwater and set a course south-south-east, towards deeper water and out of the heavy shipping highway leading into the port.

With the sea on her starboard bow and the craft running at 14 knots SOG, Derrick and I sat back relaxing (as much as one can in sea like that) and experienced the way the Riviera 37 settles her stern into the water during forward thrust, providing a great deal of lateral stability. Her bow, trimmed down marginally, still cleaved the oncoming wave crests with ease, sending the spray far and wide.

At this speed, in that sea, she was surprisingly comfortable and the helm station was very snug, as the full clears ensured that no wind-driven spray — unavoidable under such conditions — could get to us. 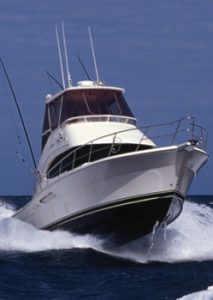 During this sustained run there was time to contemplate the design and user-friendliness of the flybridge on this craft. Any flybridge has the effect of drawing crew up to the top, apart from those nursing hangovers and finding comfort in the luxurious saloon, that is. It’s an area that’s popular both while travelling and while fishing. As such, it needs practical and comfortable seating, as well as sufficient handholds for folk to enjoy their experience while keeping the skipper company.

I found the skipper’s station very practical, both when standing at the helm in the heavy head seas, as well as when sitting back, half-turned around to view the lures, or when the boat was being manoeuvred in reverse to a mooring, or when following a big fish. The instrumentation and electronics are well positioned for easy viewing. I especially liked the concept of the “co-pilot’s” seat being on the port side of the skipper, as this enables those using this seat to get up and move without always pushing past the skipper.

The seating in front of the helm station is designed so that those sitting up top can easily half-turn around and chat to the captain and co-pilot in comfort.

As the entrance/exit to the flybridge is via an opening within the confines of the flybridge, it has a trapdoor which covers the hole to prevent a possible accident. I found the access from the fish deck to the flybridge extremely easy, even for a big person.

After a number of miles, and once we were well out of the shipping lane, I had to turn and run into the heavy head sea. Although I initially reduced speed, I found that by adjusting the craft’s trim, I was able to regain my cruising speed of about 14 knots without feeling I was pushing the craft too much. However, a big head sea is always horrible and I found myself having to work the throttles a lot due to the odd wave peaking much higher than the average.

Before I ran back to port with the sea on the transom and the aft port side, we spent a long time trolling at speeds between five- and eight knots around all the points of the compass. I was trying to ascertain her ability to maintain an even pull on the lures, as well as avoid what I call a pronounced pendulum effect when sustaining a troll course with a full side-on sea. This is never comfortable for anyone aboard and causes a whipping effect on the outriggers. In turn, this affects the action of the lures.

Aside from this, it also gave me a chance to see what sort of wake she threw. In all these trial areas I felt she came through with flying colours, showing her pedigree of being designed by fishermen for serious big game fishing.

On the drift, side-on to the sea, she surprised me as she sat solidly in the water with even less lateral movement than when slow trolling.

My favourite review routine is backing up. After ensuring the trim-tabs were in the “up” position, I very cautiously began backing up on an imaginary big fish. After a while I became more confident and backed up quickly, slipping her transom from port to starboard with speed and dexterity. She’s certainly made for the job. What’s more, she does not push excessive water during this backing up procedure.

The run home was a pleasure. I trimmed up her bow and eased the throttles so that we were running between 17 and 20 knots. She did not yaw, and the odd surf down the wavefront seemed effortless for my 43ft motorised surfboard.

In the more protected waters, I nudged her up to 2 900rpm, which gave me an SOG of 26 knots. “She can go faster,” Derrick told me. “She touches 30 knots in ideal conditions.” Speed is not my thing, though, and I was more than satisfied with the 20/25 knots I ran her at.

During the review I had a mindset to overcome in that this craft was bigger than the “37 footer” I was expecting. I found this point cropping up over and over again, proving just how much we tend to categorise craft and how much we expect from, say, a 30 footer, 36 footer, 40 footer, those in the upper 40s and those in the 50/60ft categories. Basically, the Riviera 37 has a lot more space — both internally as well as on the fish deck — than I had expected. To start with — where every big boat skipper should begin his day — I did the engine pre-start check. I crawled in between the two 370hp Cummins A011 turbo-charged engines and viewed the overall immaculate layout and accessibility of this engine compartment. The size and space really impressed me.

Then there is the fish deck. Although it’s designed for both big game fishing as well as cruising, one can easily see she leans more towards the fishing aspect. Although Costa opted for a lightweight Relax fighting chair, the craft is designed to take a big chair to fight big fish.

With outriggers, rod holders, bait station, eutectic cooler box, circulating livebait well and transom marlin door providing the necessities and some luxuries, the Riviera’s fish deck is very practical from a deckie’s perspective and a pleasure for the angler.

The fish deck has an aft centre lazaret which supplies storage space and access to the bilges and rudder arms. It also has a below-deck wet storage locker on the starboard side and a fish hatch on the port side.

It’s worth mentioning the stowage for tackle and all the other boating necessities, as there is so much of it. Again, though, I reiterate that as an angler I found it difficult to criticise the design in any respect. I’m just enamoured with the obvious fact that she has been built by fishermen for fishermen.

Then the boat changes. As I passed through the doorway leading from the cockpit into the saloon area, it was not only the opulence but also the practicality of the layout that grabbed my interest. Very, very impressive.

I really liked the simplicity and solid appearance of the internal design and finishes that I am sure are more than skin deep. The extra length and width of the Riviera 37 just provides that bit of additional space, not only in the saloon but also in the kitchenette, cabins and the bathroom to make it that much more comfortable for indoor living and entertaining. 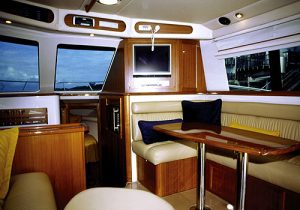 The very first Riviera I reviewed many years ago impressed me with its solid interior finishes. I am pleased to see that in this 2005 model there is no indication that Riviera’s philosophy in this aspect of their boat building is changing. Quality and robust finishes and hardware are clearly very important to the powers-that-be at Riviera.

Reading through the three-and-a-half pages of itemised standard inclusions and optional extras really puts into perspective just how much is incorporated in a craft of this calibre. From the underwater transom spotlights to the electric bow thruster up front, this craft has got everything any owner could wish for.