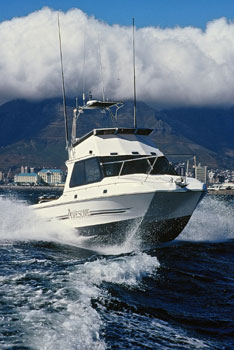 The words “bigger, better, best” sprung to mind as Mark Delany of Two Oceans Marine gave me a run down of his aspirations for this company that specialises in the upper end of the trailerable, offshore, power catamaran market. He was also explaining their reasons for designing and building a much bigger boat than they had before.

Mark actually used the words “wider, bigger, higher,” adjectives he was ascribing not only to the overall dimensions of the new craft we were about to board and take to sea, but also to its tunnel configuration.
Without being told, I could immediately discern the lineage of this craft, and yet there are a number of differences — some more obvious than others — between the Magnum 32’s design as opposed to that of the Magnum 780 which was the biggest craft they had produced up to now. As a result of these differences, ride-wise she feels quite different to the 780 which I tested way back in 1998 (See March/April 1998 issue of SKI-BOAT).

Over the past few years my visits to Cape Town have been dogged by bad weather — especially heavily overcast skies. This time it was different, other than the “table cloth” being dragged over Table Mountain by gale force south easterly winds. The anemometer in Mark’s office reflected 35 knots which correlated with what the airways captain told us as we made an unsteady approach into Cape Town’s International Airport that morning. Believe me, a measured 35 knots is serious wind, bad enough on land, a great deal worse on the water.
When I saw the effect of the wind on the water in Table Bay I had reservations as to whether we would be able to review this craft and the Magnum 23 that were ready and waiting on the moorings. “There will be some protected water in the lee of the main breakwater that extends along the V&A Waterfront,” said Mark, no doubt picking up my negative thoughts. I was glad I would be aboard the Magnum 32 rather than the smaller boat.

However, fortunately once we were in the area shielded from the wind, we had ideal sunlight and relatively calm water conditions. Needless to say, as one proceeded further out into the teeth of the wind, the water in Table Bay was, to put it mildly, bloody awful. There was not much swell, but a big wind chop with white water everywhere. The sight of the big Robben Island ferry crossing in front of us throwing tons of water up, over and sideways as she sped past emphasised the point that even as boats get bigger it doesn’t necessarily mean that they can take on everything the ocean throws at them.

After crossing to the smaller craft to allow me to photograph the Magnum 32, I immediately sensed the difference not only in stability and rideability, but also in dryness and comfort.

Two Oceans’s new Magnum 32 looked very regal, almost serene, as she powered her way through various manoeuvres during the photo shoot. She rides the waves seemingly without effort, easily retaining her composure and elegance.

This was the impression I gained when viewing her from another boat, and it did not change once I was behind her wheel. In fact, if I were to highlight the one aspect of her performance that impressed me the most it would undoubtably be this evenness or apparent ease with which she rides whatever is thrown at her. 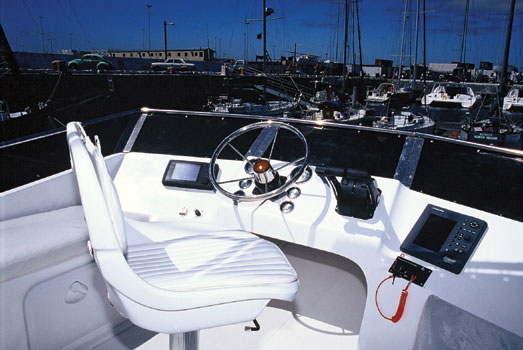 When I first took command of the craft I did so from the flybridge. It was wonderful careering along in relatively flat water with the south-easter firmly on the stern. With the rev counter showing 5 000 rpm and the GPS 30+ knots the wind factor on the flybridge was virtually nil and I was really enjoying the ride, getting her feel and seeing just how the hull worked the moderate chop.

However, that was only until I turned around and wanted to backtrack on a reciprocal course. I was nearly blown off the flybridge, because now, at the same revs, I had an effective 60 knots of wind blowing in my face. We scuttled downstairs to the protection of the cabin, not for fear of getting wet, but just to get out of the wind that was tearing at our clothing and would have whipped my glasses from my face had I been stupid enough to look around aft.

In the cabin I could get a better feel of hull over water and could definitely concentrate far better than when we were in the wind tunnel outside — or at least that’s what I would expect a wind tunnel to feel like.

Furthermore, it was time to challenge the ever bigger seas as I made my way towards Robben Island with the wind on my aft starboard quarter. What a ride — she loved it. Sitting at 3 800 rpm and an SOG of 20/21 knots, I could have retained that bearing and speed for hours on end.
Eventually, though, I had to bring her bow around and face the enemy. Initially I was not making much progress, feeling each set as it approached, so I decided to get her sponson up and ride over the crest of this short, sharp, quite big sea. I eventually had her running at 25 knots at 4 500 revs. While she was taking this speed very well, I dropped down to about 18 knots which I felt to be the most comfortable speed that allowed us to cover a lot of water without hurting the boat or those of us aboard.

I’ll reiterate a strong view I have about the difference between good skippers with good boats and cowboys with broken boats: there is an optimum cruising speed that allows one to get to one’s destination comfortably and in reasonable time without subjecting the craft to excessive and unnecessary stress. This speed varies from craft to craft and sea to sea, but a good skipper will soon access the “comfort zone” and ride it accordingly. 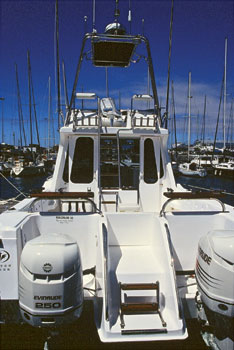 When I reduced the speed too much in that head sea the Magnum 32 was tossed about, and although she took the sea very well at high speed, the odd wave that was out of sequence sent a shudder through the hull as the sponson climbed into it. Neither the boat nor I enjoyed that. However, at 18 knots, which is fast enough to get to the grounds or back to port, neither of the problems encountered at opposite ends of the speed spectrum were experienced — skipper, crew and boat all enjoyed the ride.
The Magnum 32 reacted surprisingly well to the trim of the twin 250hp Evinrude outboards which were swinging 19 pitch standard aluminium propellers. Normally a cat this length adopts the “designed ride” built into the sponsons, but with this craft trim adjustment both bow up and bow down, as conditions dictated, showed distinct improvement in ride, revs and SOG.

Running with the wind and crests directly on her transom was easy and I am convinced that even had there been a big swell to add to the scenario she would have taken it in her stride.

By this stage we had worked our way back into what I would have considered fishable conditions, bearing in mind that the wind was blowing 10 knots above the limit at which SADSAA calls off fishing competitions. I then spent a lot of time setting a large figure eight course at troll speed. The figure eight pattern covers every aspect of the craft’s performance in every conceivable prevailing wind and sea condition. This way not only can trolling speeds be judged, but one can also see the wake/white water pattern produced at the different motor revs needed to maintain a constant SOG. Even Mark was surprised at just how much variation you can get during this aspect of the trial.
At very low speeds — one motor at 600 rpm — she was good in the protected and semi-protected water, but as we ventured further out to sea the wind tried hard to push the craft off her designated course.
On one motor — the port motor running and the other tilted — she planed into the wind at 15 knots and, surprisingly, was not much faster with the wind on her transom.

Reversing and mooring manoeuvres were also badly affected by the wind. Mooring a craft this size with outboards, bow into the wind is virtually impossible, yet Mark did it. This was evidence of a great bit of seamanship and co-ordination with the crew on the mooring jetty and the ropes already set and tied to the correct length.

As I said at the beginning of the review, the Magnum 32 was designed to be bigger than the Magnum 780 in all respects. She not only had to provide more spacious accommodation, but also had to be able to take on bigger seas, fish harder and provide a much bigger fish deck with greater capacity ice/fish hatches. Two Oceans Marine have done just that and have made her extremely good looking as a bonus.

The fish deck is wide with reasonably high gunnels, and stretches quite a way forward to the cabin entrance, giving a large, open deck area only obstructed by the bait station seat and flybridge ladder. A similar configuration, but with a very large above-deck fishbox, is available for those wanting to load lots of tuna.

Below deck level in the stern section of the sponsons are two built-in 400 litre aluminium fuel tanks. In front of these are two big, insulated fish hatches. A 75 litre freshwater tank is also installed.
Between the motor wells a transom gate provides access to a swim platform and ladder that should come in handy when the craft is used for partying or diving. 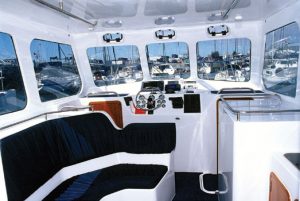 The cabin and main helm station are both a good size and are extremely well laid out to make maximum use of the space. This area incorporates more than adequate, very comfortable seating and limited galley facilities.

The extremely well positioned, comfortable helm station has an upholstered bum rest seat. More and more craft are being fitted with these as they offer a very practical compromise between sitting and standing when at the helm. Binnacle mounted controls and a full range of instruments and electronic accessories make up the good-looking, very practical skipper’s domain.

Access to the forward cabins, tackle-room, heads and shower — all of which are spacious and practical — is provided by means of a protected hatchway into each sponson. 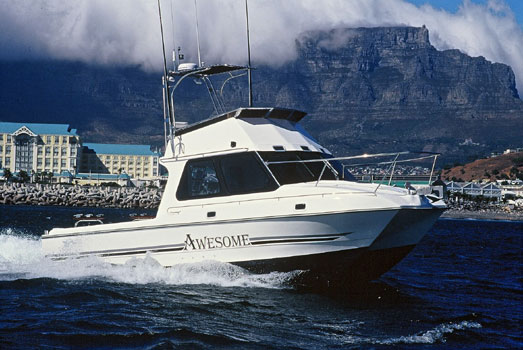 Throughout the internal facilities of this craft a lot of thought has been put into making it as practical as possible, as well as having both attractive and user-friendly finishes. It’s hard to describe in a few words what I mean by user-friendly, but Mark and his dad, Rod, have over many years found out what we South African offshore fishermen like in the way of tackle stowage and finishes and have perfected these within their internal mouldings. Simply put, they look good, don’t break and are easy to clean after a long, hard day’s fishing in rough seas.
A good-sized flybridge completes this sportfishing craft. The helm station is comfortable and well appointed with sufficient instrumentation and gauges to enable the skipper to happily spend the day “upstairs”.
Two long seats and a solid, stainless steel bridge canopy and radar arch complete the flybridge, providing shade and practical support to visitors to the flybridge, especially in inclement weather.

The Magnum 32 is not only a fine example of a craft designed by South Africans for South African conditions, but has also entrenched Two Oceans Marine as very competent boat builders capable of designing and manufacturing craft that are beyond the realms of what we in this country expect from ski-boats.