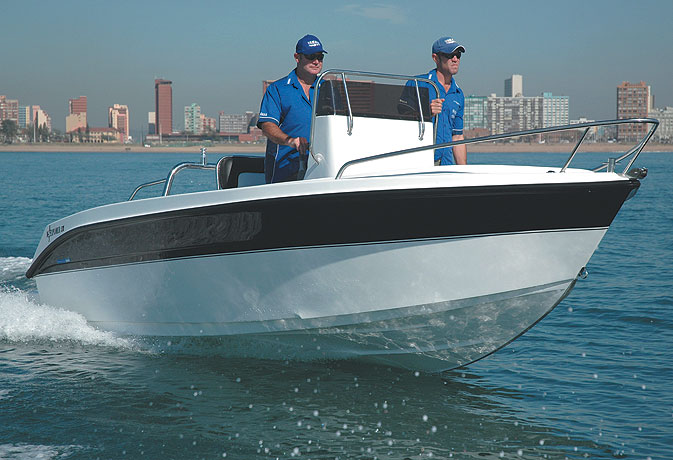 YET another one of Yamaha’s multi-purpose boats came up for test recently — this time the Yamaha Explorer 540 with dual- and single installation. Previously we’ve tested the Explorer 465, which proved to be quite a craft for her size, so it was off to Durban Ski-Boat Club with the Yamaha crew to see if the Explorer 540 is as good as the smaller model. 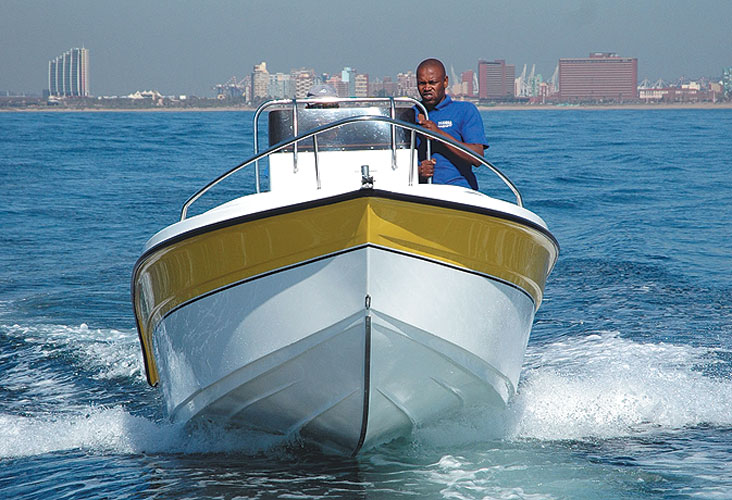 GENERAL IMPRESSIONS
The two Explorer 540s that arrived in the parking lot at DBSC were very eye-catching. The reason? For a change these boats had some colour to them: in the past the majority of boats in this range have been plain white with a few GT stripes to break the monotony. Aside from that, they boasted the standard striking Explorer monohull lines and modern design, looking ever so ready for an offshore test.

CONDITIONS
It was one of those pre-winter mornings off Durban with close to perfect conditions in all areas. This always simplifies tests and make a day out at sea a pleasure.

LAUNCHING AND TRAILERING
The Explorer 540s come standard on galvanised breakneck trailers, and with the launch being so flat at Vetch’s, it was a simple task to run the boats off the trailers and swing them into the water. Retrailering after the test was also simple enough with the aid of an electric winch. 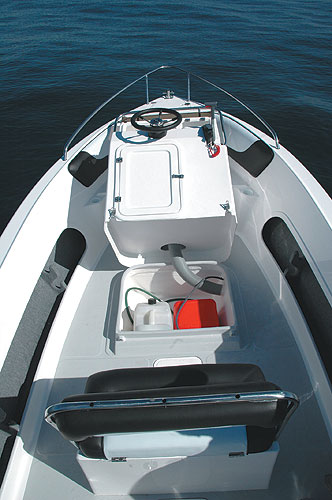 MOTORS AND CONTROLS
As previously mentioned, the 540s come in two models — the single installation which sported a single V4 130hp Yamaha, and the dual installation which sported twin 60hp four-stroke Yamahas. Both combinations were trim-and-tilts and were well-suited to the craft on the power side.
The controls were standard Yamaha 703 boxes which were smooth to operate, and the cable steering systems were smooth enough for someone on a tight budget.

PERFORMANCE
Being very similar in design to the 465, with a fairly deep vee that flattens out towards the stern, the 540s plane effortlessly. Trimming to create a comfortable ride was fairly simple, and I noticed that they performed well when I pushed the trims right up to get bow lift.
Just like the 465, the 540s ride more on the aft section of the hull which creates a dry ride — helped along by the good water deflection off the outer chines. The 540s have a decent beam to them, for monohulls, and this no doubt contributes to the good stability that it demonstrates.
Pushing both models through a series of tests, I found very little
difference between the handling and
performance of the two. The small differences we did come across between the single- and dual installation were in the areas of acceleration, top speed and sensitivity. It would be difficult to choose between the two, and would depend on your personal applications for the craft. Both were good options.
When you have a flat day at sea, it can be quite tricky to get a good grasp on how a craft really rides, but I still tried to push both 540s at slightly higher speeds than usual. At between 15 and 20 knots the ride was smooth, fairly soft and stable. At higher speeds, between 25 and 30 knots, the ride still maintained the smoothness and stability, with a bit of slap on the hull being detected when trying to race around at these higher speeds.
In the turn from stationary and at higher speeds, the 540 banks comfortably, and when full locking under power very little cavitation was detected. This is a good characteristic to have when surf launching. 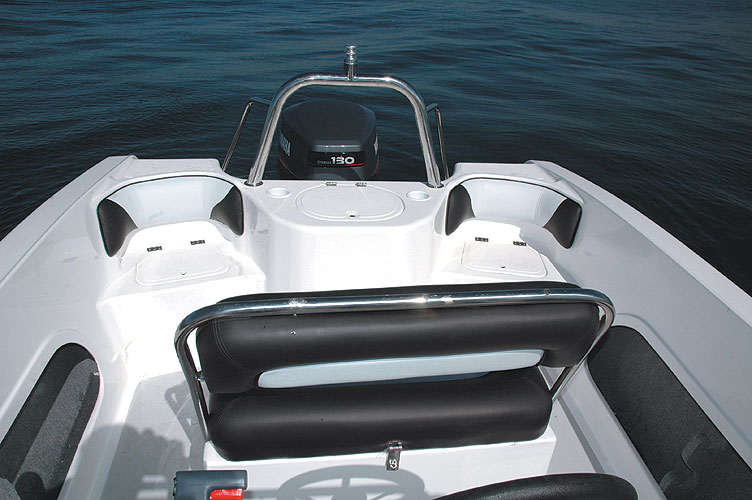 LAYOUT
The 540s have all you need for a general multi-purpose craft — and more —when it comes to the layout. On the stern there are step-ups on both sides that lead onto the false transom section which houses a small livebait well and small rollbar/ski pole. Also built into this section are dual padded side seats for passengers, with small hatches beneath.
The deck area is non-skid throughout, with a fair-sized fish hatch and raised hatch/seat with adjustable backrest mounted behind the console.
The console is a fairly large and spacious one which they have obviously been able to fit thanks to the wide beam. The console has ample space for all the necessary electronics and is complemented by a full windscreen and stainless-steel guard-/handrail.
One thing that’s unique about these consoles is that they are hinged to the deck so that they can be unlocked and pushed forward (see picture overleaf). This will be especially beneficial when towing the craft for long distances. The fuel tanks are stowed beneath the console which also gives extra hatch space in other parts of the boat.
The gunnels on the Explorer 540 are high and have flush-mount panelling with rod racks recessed into them. In the bow area there is another large, raised seating area that is padded, has a large built-in hatch and is complemented by a full bowrail with bollard for the anchor hatch in front.

FISHABILTY
As this is a stable, centre console craft, the 540 is well suited to general fishing and flyfishing offshore, as well as angling on stillwaters.
There’s ample space in the bow and stern areas, and the raised bow hatch/-seat, could be utilised as an elevated casting platform if you removed the padded seating. The high gunnels are also great to lean against when casting or fighting fish.
Throughout a series of trolling tests at different speeds, both 540s were simple to control and retained their good stability and comfort.
By adding a few extra personal touches on the fishing side you’ll have a super multi-purpose craft. 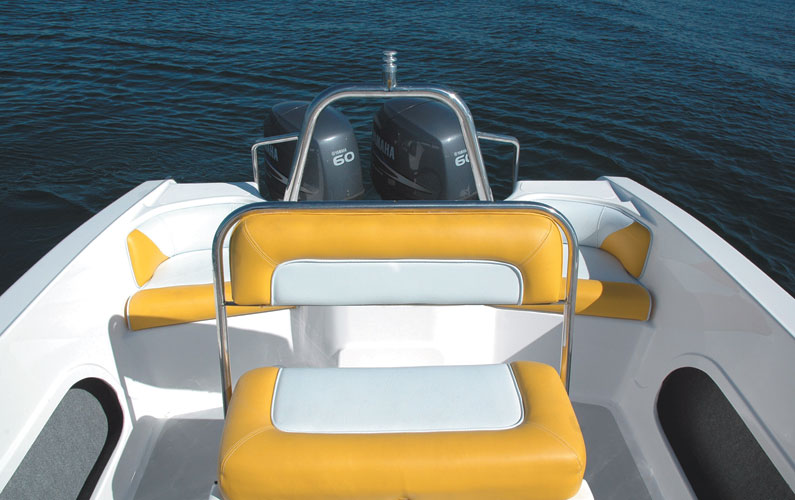 FINISH
The new colours and trimmings really make the Explorers stand out, looking different but classy too. This new look just adds to the standard good finish on these craft, which seems to be getting better and better every time we test them.

CONCLUSION
Boats like the Explorers are multi-purpose craft that are suited for many applications, like all-round fishing, waterskiing and general family fun. In addition, with a length of 5.4 metres, the Explorer 540 is not difficult to tow over long distances. She is reasonably affordable too.
So, if it’s time for a change or you are looking for a new boat, then put the Explorers onto your list.