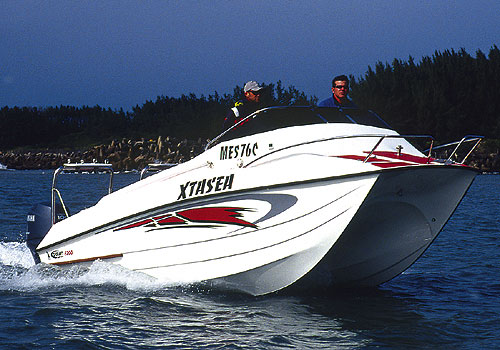 SMITH’S first boat review — how would it go? After a quick introduction to Peter Motzouris of Z-Craft, and a quick look at the two ski-boats up for review, we set off to the water.

Conditions for the review were far from perfect, but nonetheless the F200 gently eased off the sturdily constructed, galvanised, breakneck trailer, once it was submerged on the slipway. Powered by two 100hp Yamaha four-strokes, she had no problem reversing away from the slipway into a fresh 15km south-westerly that was making its presence felt. Even with the weight of the four-strokes, the stern’s buoyancy was not compromised, and she took very little water onto the main deck while reversing into the strong south-westerly chop.

Once the guru of boat tests, Erwin Bursik, had finished working the Kingcat 2406 — with me alongside, dying to get my hands on the steering and set of controls — it was my turn to put the F200 through her paces.

As I proceeded to take the helm of the craft, I noticed a definite sense of hesitation from Erwin and Peter. Frankly, I don’t blame them, as neither of them had a clue whether or not the new kid on the block was capable of driving a boat! Anyone can have all the qualifications and experience for skippering, but still be a Bob Hope skipper. However, after a while I saw the two of them relax, and as we made it back to shore with the crew and craft all still intact, I think my standing as a reasonable skipper is on fairly solid ground. 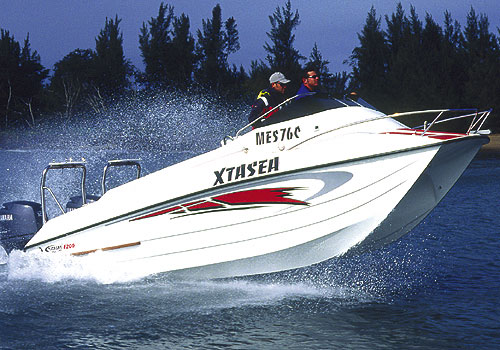 My first impression, judging by the general cosmetics and design of the F200, was that this boat would perform exceptionally well on the ocean. The F200 has been designed to suit fishermen who do a lot of long-distance towing, in that she is slightly narrower and shorter than the Kingcat 2006 (the model up from this one), making her easier to tow on narrow roads like those in Moçambique.

The F200 has a proud bow, and with the help of the trims you can create a dry, comfortable ride, whether you’re running into the chop and swell, with it or side-on. The decent bow will also aid you in punching the larger foamies in the surf, without the duck-and-dive. Although the F200 is slightly shorter and narrower than her bigger sister, she is still well in proportion, which ensures she displays good stability both when stationary and when powering ahead, running with the wind and swell, or side-on to it.

The F200 handles extremely well when banking into tight turns at all speeds, with little cavitation — a definite prerequisite for surf launching. At the same time, the F200 gives the skipper and crew a soft ride at a reasonably constant speed. With all these attributes she will definitely be a winner in our surf zones. 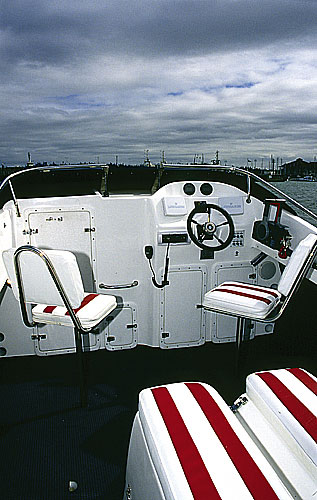 The F200’s general layout is practical for the ski-boat fisherman as it is simple and spacious. From the stern section the motors, steering system and cables have been fitted neatly and with precision. In between the motors is a small step platform with a fold-down ladder for easy entry into the boat, and exit, both when she is on the trailer and in the water.

The transom section flows into a hatch system consisting of a decent-sized livebait well with a clear viewing window for monitoring your livebaits, and another one on the opposite side which can take Luna tubes.

The deck consists of two fair-sized fish hatches that can handle long fish like ’cuda and wahoo, without them having to be folded in half. There are also two fuel hatches that take 3×25 litre cans per side.

All deck hatches have flush-mount lids and handles, so you won’t have to remove or replace toenails when you get home.

In the centre of the deck there is another bonus hatch. This one is raised and serves as a seating area. It also takes another six cans of fuel, so long distance and many hours of trolling will not be an issue with this boat.

Matching rod- and gaff racks are positioned on the gunnels. The higher gunnels also makes it more comfortable for the crew when fishing and travelling. 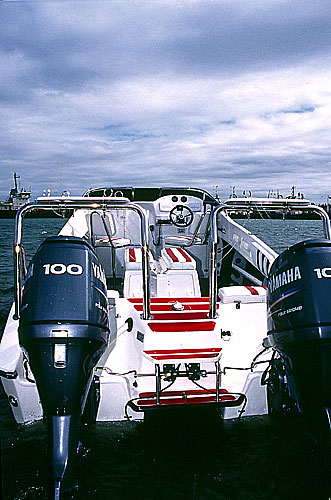 Moving toward the console, there are two seating stools — the skipper’s is adjustable for standup driving. The console area is also neat and spacious, with all the necessities: a decent area for fishfinders and GPSs of all sizes, two fishing tackle hatches with drawer systems for organised tackle storage, dry storage compartments and a decent storage section that opens from the deck side. This can be used for general storage.

The top section of the console has a windscreen that gives good protection from the wind. It also has a small reverse bend on the top to throw down that odd chop splash, preventing it from slapping you in the eyes.

There is an assortment of stainless-steel handles and a decent bow-rail to hold onto when dealing with either of the two anchor hatches that are mounted in the bow section. All of this, but still plenty of uncluttered space to move about in!

In conclusion, the F200 has a superb finish, along with a practical layout for the avid fisherman. She presents a cheeky, modern look, and acts her looks when performing on the ocean.