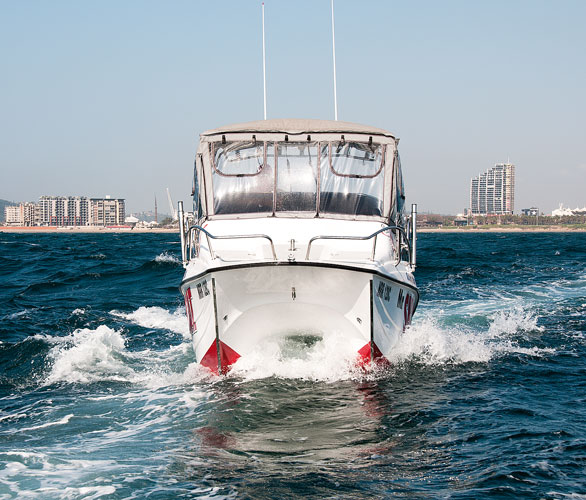 I’VE been waiting for ages to get behind the wheel of this craft and take her for a ride! Of course I’m talking about the legendary Z-Craft F200. Believe it or not, in all my years of ski-boat fishing I had never been on one of them before this test.
The agreement for the late Peter Motzouris to build this boat for his life-long friend, Erwin Bursik, was made almost a year ago. I never thought Erwin would buy a boat again, but it seems that after lengthy discussions he decided that he was not yet that old and that he could still skipper and own a boat. When Erwin told me the boat was finally ready and he needed to fetch her from Richards Bay, I quickly offered to take him there and tow her back. 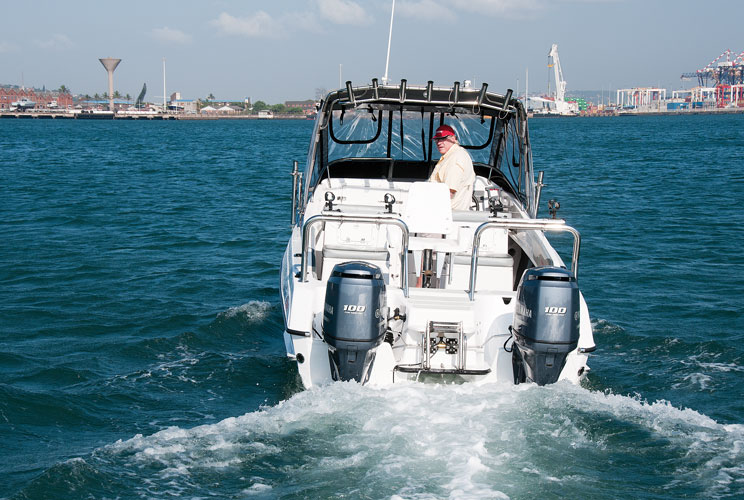 FIRST IMPRESSION
When we arrived at the Z-Craft factory they were still busy with the final touches and brush-up of the boat. The F200 is a stunning-looking, very proud boat when seen on her trailer, and Erwin and I couldn’t wait to get her back to Durban to see how she looked in the water.

TRAILERING AND LAUNCHING
I hooked her up behind my Navara and off we went. At first I was a little nervous to exceed 90km/h, but the further we went the heavier the foot got on the gas. Eventually I had a good cruise-control speed of 120km/h. There was no swaying from the boat, and she rode so smoothly that I often had to remind myself to slow down as I was towing a big boat. She felt very comfortable behind the bakkie and not once did we feel that we were travelling too fast.
The people at Z-Craft have perfected the trailer’s braking system too, because when I had to stop at a traffic light I knew the trailer and boat were behind me. The brakes were immediately responsive, so I didn’t get the bump followed by the brake, as sometimes happens. Indeed, the trailer slowed down as the 4×4 slowed down, and I never felt like I was being pushed from behind.
Once we got to the Durban Rod and Reel Club it was a breeze to let her slip off the trailer and into the water. After the test Erwin drove her up on to the trailer, but because it was low tide he could only get her three-quarters of the way up. I tied her to the trailer, pulled her off the slipway and easily got her completely on to the trailer using the hand winch.
The trailer is a single-axle galvanised breakneck trailer with a braking system in the front. Z-Craft custom-build these trailers according to the specs of their boats. In short, it’s a very well designed and built trailer.

WEATHER CONDITIONS
The weather didn’t play along and we had a fairly strong northeaster blowing with the swell running at about two metres all over the place. It was definitely not nice weather to fish in, but good weather in which to test a boat. 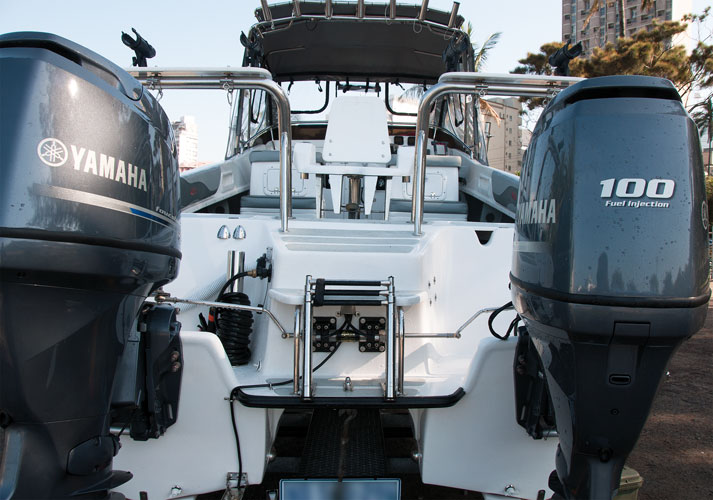 MOTORS AND CONTROLS
As tested Erwin’s F200 was fitted with twin 100hp 4-stroke Yamaha motors. Over the years it has been proven that this is the perfect combination for the F200. I still recall the conversation Erwin and I had about these motors when we discussed whether they were big enough for a boat of this size. The answer is a resounding yes!
I must admit I still had some doubts before we put her to sea, but all those worries have now been laid to rest.
Mr SKI-BOAT is fitted with normal side-mount cable controls, but they’re as smooth as you can get. She is also fitted with an hydraulic steering system which is a must for this size boat and motors. 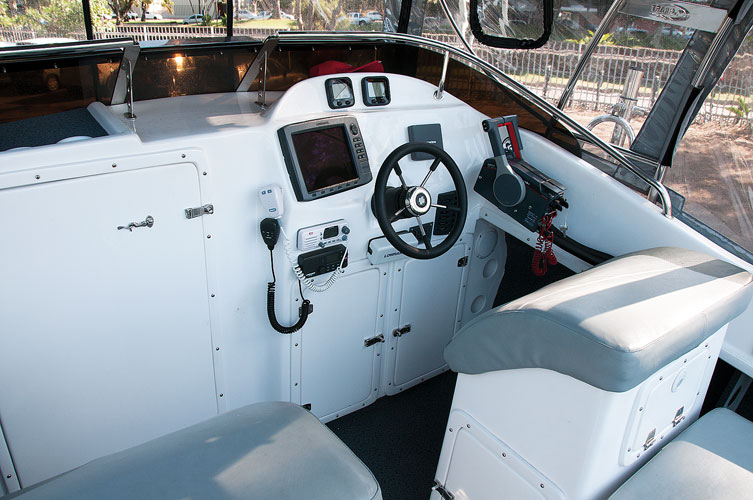 PERFORMANCE
As it was my first time on a Z-Craft I was quite excited but also a little nervous, considering the sea conditions. If you are unfamiliar with a boat and don’t know how she handles, you need to be more careful than usual. However, with Erwin at my side I was determined not to look like a sissy, so I went ahead and put her through her paces. Within ten minutes I had calmed down and was fully at ease. The F200 got out the hole much faster than I expected, again proving that Z-Craft had chosen the correct combination of boat and engines.
I also showed Erwin my figure-of-eight test to check that the motors had been fitted correctly. If they’ve been properly fitted you should be able to turn both ways in full lock and form a perfect figure-of-eight. The F200 passed this test with flying colours.
One outstanding feature of Z-Craft boats is that they run very proud in any conditions. This stops a lot of spray coming over the front and gives you a very dry, smooth ride. Into the swell and running with the swell she handled very well. As her bow is usually so high when running, it is barely necessary to adjust any trims at any stage.
Performance-wise I could not fault her in any way. Whether we were drifting or slow trolling it didn’t make any difference — she’s as stable a craft as you can get — and we could move around on her with ease, even in the poor weather conditions. 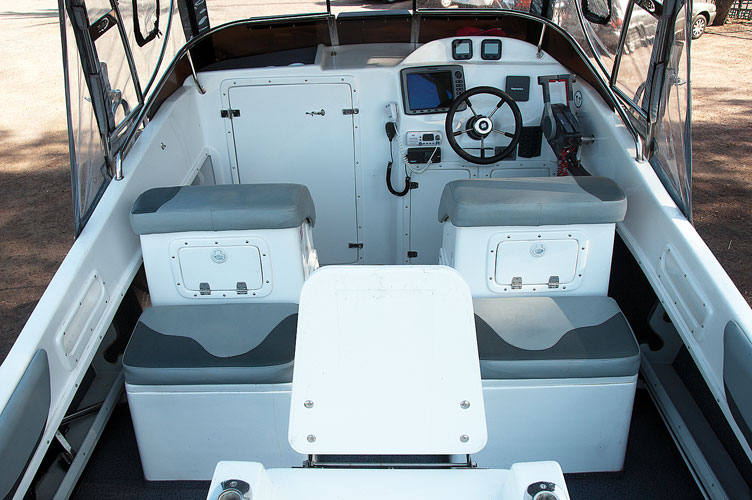 LAYOUT
This boat was specially built for Mr B just the way he wanted her. Mr SKI-BOAT has the usual anchor hatch in the front, and then there are clears all round the stainless-steel T-top. This is important because when people get to a certain age, comfort counts more than it used to.
She has got two bum seats in the front, one behind the helm and one for the passenger. Both these bum boxes have fuel hatches underneath and are very comfortable to sit on. There are also some extra seats towards the stern for those long marlin-trolling days.
The T-top has plenty of space for all the extra rods as well as the necessary aerials. In the middle of the deck there’s a fighting chair for marlin fishing, and there are big fish hatches in the deck for gamefish catches which are destined for the pot. The deck layout has been very well designed, and the gunnels are high enough to be able to lean against when fighting a fish, should you prefer not to have a fighting chair on board. The boat is very spacious and can easily handle four or five people.
At the back of the boat and in the gunnels there’s space for you to place your rods when trolling. There are also built-in Lunar tubes on the left of the false transom, with a livewell on the right side. The battery hatches are fitted in the middle of the false transom.

CONCLUSION
Overall, my opinion about this Z-Craft boat is that all the stories I’ve heard are true — this is one of the best craft in the market place. The combination of boat and motors is perfect, all the extras that have been fitted to suit Erwin fit the boat perfectly, and she is easy to tow for such a big craft. Her performance was also flawless, and I would take her through the surf any day.
Mr SKI-BOAT was certainly worth the wait. Our congratulations and thanks to all the parties involved who made this happen.