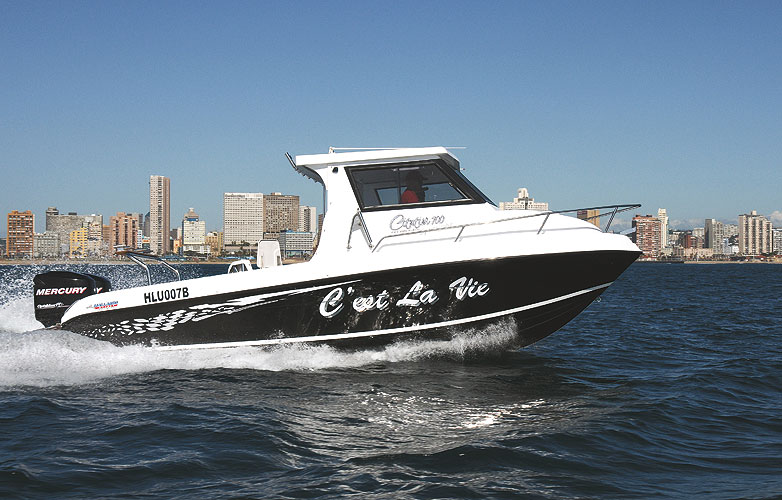 JUST when everybody was wondering why Mallards Boating was so quiet they unveiled a new, smaller version of their Citation 900 — the Citation 700. I saw one of them a year ago in Richards Bay but only had time for a quick glance. Now I was standing at the Natal Rod and Reel Club looking at not one but two of the new Citation 700 boats.

One of them was the cabin model, and the other the sportfisher version, and I battled to decide which one I liked better. Erwin Bursik and I met up with Mike Barnes and Tjaart van der Walt from Mallards to take these boats through their paces.
We were not sure what the weather had in store for us because the evening before the weather man had predicted a 20 knot southeaster. However, when we arrived at the water early in the morning all was still calm. 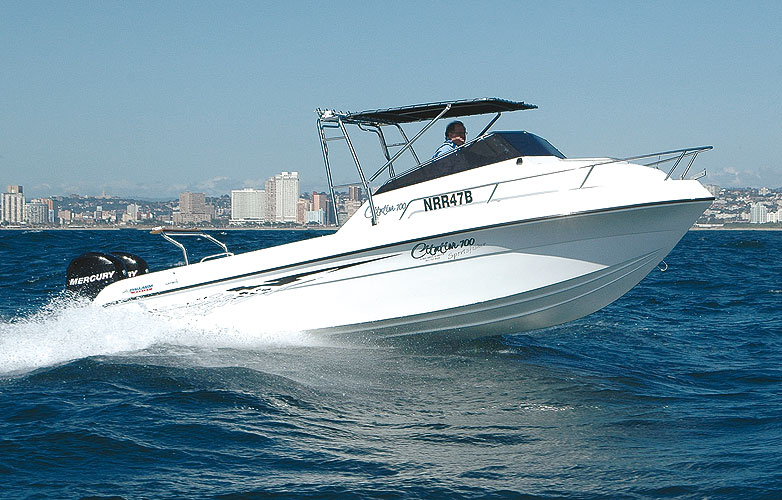 To begin with we were aboard the sportfisher and I particularly liked its spacious layout. Personally, I prefer a cat to a monohull, but when it comes to a 20ft-plus monohull, that’s a different story. I loved the ride of the Citation 900, so I was very excited to test the new Citation 700.
The sportfisher had been fitted with twin 115hp Mercury 4-strokes and the cabin version had twin 135hp Mercury Optimax motors.
With me at the helm we slowly trolled off Vetch’s Pier, waiting for Mike to join us with the cabin version. Tjaart and Erwin were sitting at the back chatting, so I told them to hold on and pushed open the throttle. The speed and acceleration were superb.

By this stage the swell had increased to about two metres with the southeaster blowing at about 10 knots — just enough to irritate you. I made a couple of sharp turns, first to port and then to starboard, with Erwin and Tjaart hanging on for dear life. This is a seven metre boat that you could turn in the surf. Her 360 turning ability is phenomenal.
I turned her nose towards land and ran with the swell to see if she would broach, but she gave not even the slightest indication of this. 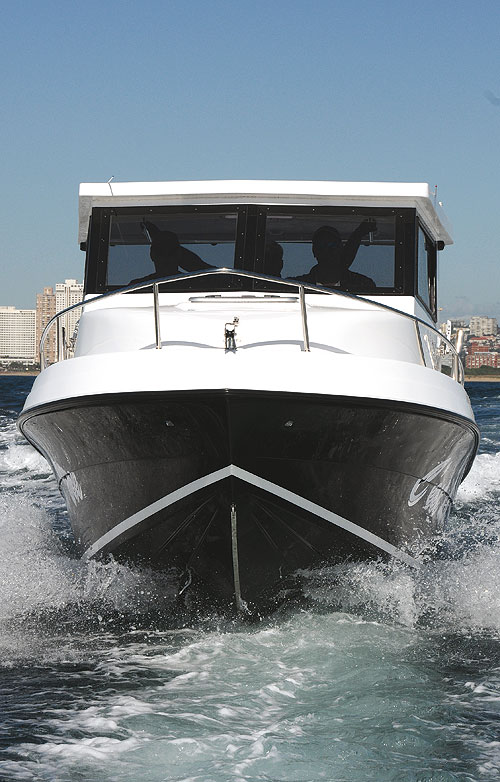 Then I swung her around again, under loud protest from the two backseat drivers, and pointed her into the oncoming swell. She cut through the water with ease. This brought back many good memories of the first Citation 900 Mike built and which I had the privilege of using a couple of times.

There’s no doubt that the Citation 700 is merely a smaller version of the Citation 900. The bigger sister gave me a great feeling of comfort when travelling through the waves, and although this craft was quite a bit smaller, I still got that same feeling. This is a clear indication that the hull design of the 700 and 900 Citations is pretty much the same.

By this stage Mike had arrived and I had to jump across to the cabin version. I quickly commandeered the helm and took this lady through her paces. 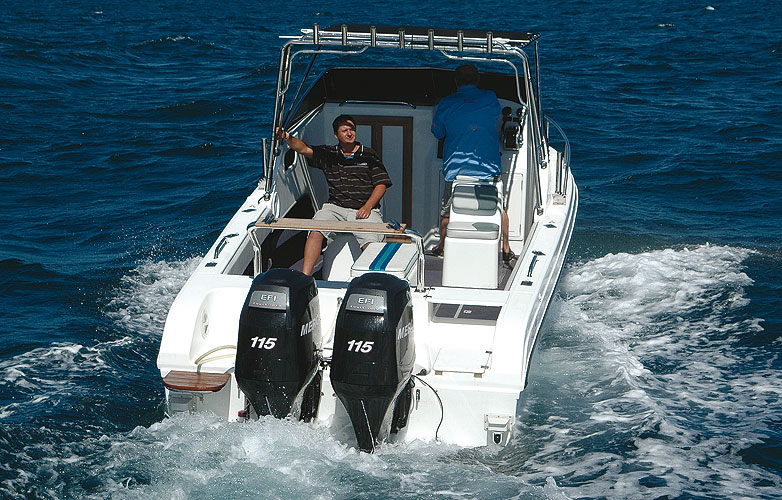 Although the cabin version was fitted with bigger engines, the boats’ performances were almost the same. I felt a slight difference in the speed at which they pulled away out the hole, but trolling at marlin speed, between 7 and 8 knots, they were running exactly the same.
Both boats performed very well at full throttle. Even though the sea conditions were bad later in the morning, we could still comfortably manage a speed of between 20 and 25 knots.

The craft were both comfortable at test speed as well as at fast troll speeds of 8-10 knots and when we were just in gear. They never threw us around, even in the prevailing sea conditions. For a monohull that’s really saying something!

They were both very stable when we were drifting and slow trolling like we would normally do with livebait. Even Erwin was impressed that we didn’t experience the rolling motion that a monohull is renowned for. Michael has certainly got it right once again. The cabin version also gave no indication of experiencing cavitation, and there was no sign of her wanting to broach when I was running with the swells. This is more or less what I had expected from these craft.

Onto the layout of the boat … The cabin version has a hard top with rod holders at the top to create extra space. Her cabin is very spacious — big enough for you to relax in when marlin fishing, especially during those dead periods in the day. The entrance door to the cabin is also big, making it easy to enter and exit. On both sides of the cabin there are decent sliding windows to provide a good view and a through breeze.
On the right-hand side of the cabin you’ll find the console with more than enough space to fit all the electronic equipment and gauges, as well as whatever else you think you need. There are bum boxes on both sides of the boat, and there are small, comfortable seats on the back of the bum boxes. It seems that the new trend is to provide much more comfortable and stronger seating than the old conventional stainless seats we used to get.

There are plenty of rod holders both along the tops of the gunnels and recessed into the sides of the gunnels, so you don’t have to limit the rod selection too much.

At the stern, below deck, you will find the pumps that feed your built-in Luna Tubes — one on each side of the livebait well. Battery boxes are also situated on both sides, and then she also has a hatch for the oil bottle that feeds those 135hp Mercury Optimax engines.

The sportfisher version also has a comfortable cabin in the front. You still have the same console as the cabin version, though, with plenty of space for all your electronics.

This craft had also been fitted with two bum boxes, but she has an extra hatch in the middle of the deck instead of the fighting chair. Shade is provided by the stainless-steel T-top which is also fitted with rod holders. Both of these boats were fitted with outrigger holders. The sportfisher also has rod racks inside the gunnels with rod holders flush mounted on top of the gunnels. 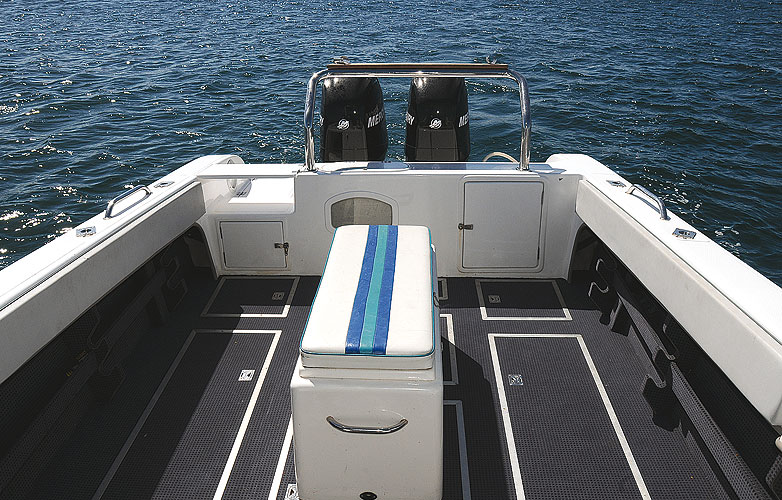 This boat’s gunnels were padded to make it more comfortable for you to lean against them when fighting a fish or even just to keep your balance while the boat is travelling.

On both sides of the centre hatch you will find huge fish hatches. In fact, there’s so much storage space in the floor that you will never have to leave things lying around on the deck. The fuel hatches are also fitted into the floor.

In the middle of the false transom there’s a livebait well with a lovely window so that you can see your bait swimming around. On the port side there’s a step that can be used when boarding the craft or if you want to load a big fish that’s too heavy to lift over the gunnels.

These boats are not too heavy to tow, so you would easily be able to take her with you to Moçambique.

Indeed, the two new versions of the Citation 700 certainly are a welcome addition to Mallards’ range of good, stable boats. Whether you’re looking for a marlin boat or a gamefishing boat, or you just want to do some jigging or dropshotting, you definitely have to try the Citation 700. She’s stable, comfortable and classy, with high gunnels. Besides, some very satisfied customers have confirmed that she can handle big seas with ease.