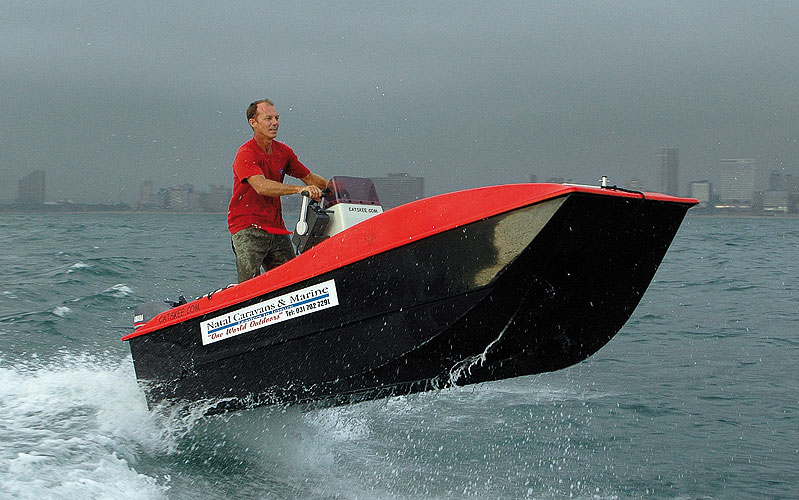 THE last time I tested a Catskee, it was a man-powered pedal boat that you had to pedal like a bicycle. I was impressed by its stability and thought it was perfect for its designed application — stillwater flyfishing for trout. So when Bill Harrison of Natal Caravans & Marine asked me to test the new, small, affordable Catskee, I was keen to see what changes had been made. I really did not know what to expect, but I knew it would be interesting going to sea with this craft.
Considering the price of ski-boats these days, it is essential that someone can offer affordable, entry-level craft to the man in the street. Although the Catskee 375 is not a big boat and doesn’t have the biggest motors, for a reasonable price you’ve got a boat that will get you on the water and to the fish.
The whole idea behind this little boat is that you’d be able to handle her by yourself, you won’t need a 4×4 to tow her around and she would be at home on dams, estuaries and out at sea. 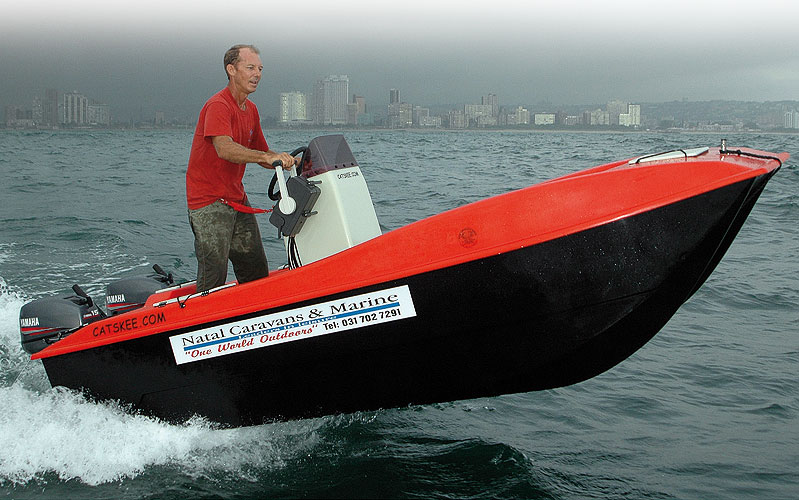 GENERAL IMPRESSIONS
My jaw dropped when I saw this little cat roll up to the Durban Ski-Boat Club — with a length of 3.75m and a width of 1.6m, this is by far the smallest boat I have ever been asked to test. She was their most basic model, and numerous accessories still had to be added to her, but those were all cosmetic and I didn’t need them to do a boat test.

CONDITIONS
To begin with we had a lovely sunny morning with the sun just peeping over the horizon as we slipped her off the trailer into the surf. However, while we waited outside the harbour mouth for the photography boat to arrive, I saw that the predicted southwesterly was not too far off.
The sea was fairly flat in the beginning, but just as we were about to finish off the photo session, the westerly buster came through with a bang and made conditions horrible. 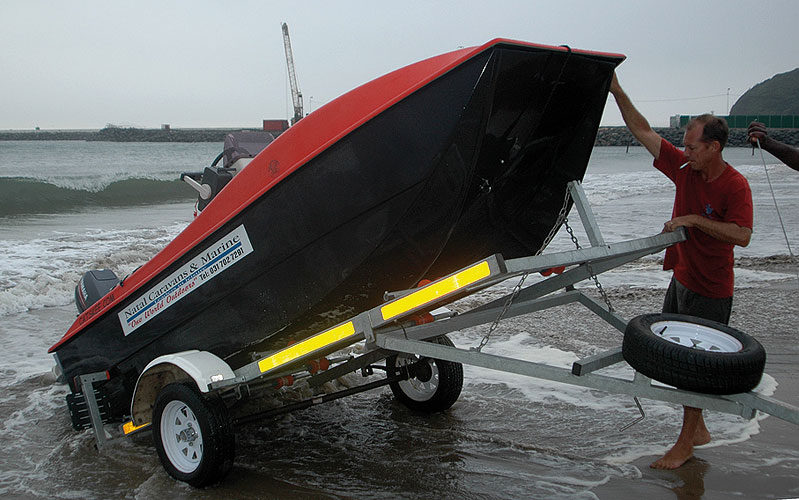 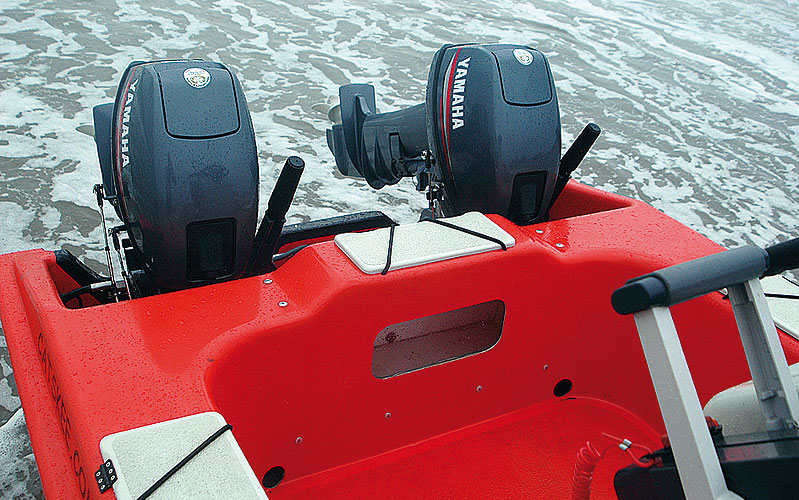 PERFORMANCE
The Catskee 375 got out the hole pretty fast for a boat with but two 15hp motors, and I was impressed with her stability — she was rock-solid. She also presented no hassles with broaching in a following sea. However, she is very light and caution should be taken going into the swell as she tends to get airborne easily.
Other than that, this is a great little boat and would be a lot of fun to run.
She doesn’t lean over to the sides on a turn and I could not get the 15hp Yamahas to cavitate. In general, this little cat can do what any other big boat can do, and maybe do it better.
Her turning ability was just mind-blowing and she would be a cinch to take through the surf. When we ran back to the protected area in front of Durban Ski-Boat Club, I was on the bigger photography boat and my skipper was gunning it to get away from the southwesterly buster. This little boat kept up with us even in the rough sea, quite astounding for the two 15hp Yamahas versus the two 60hp Yamahas. Very impressive indeed. 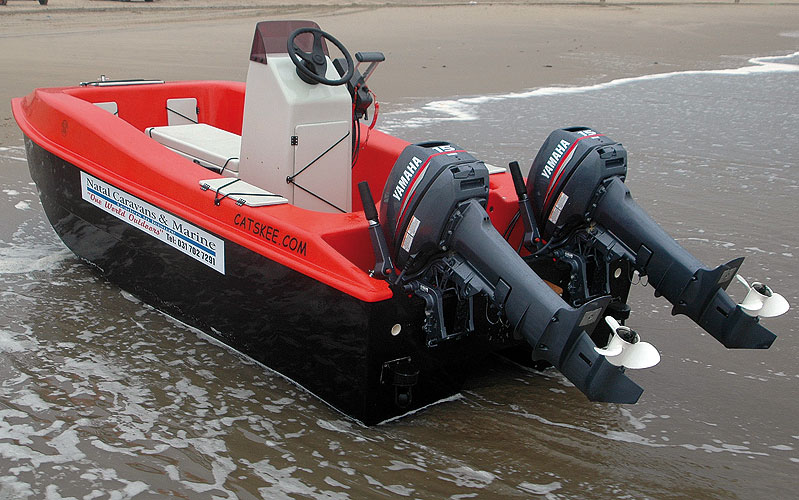 LAYOUT
The layout of this boat has been kept very plain and simple, but she has a livebait well with a window in the false transom which is very useful. The centre console has been situated a little further back than usual, which helps provide a softer ride.
The petrol hatches are located in front of the console.
The hull and deck are made from GRP with load-bearing areas and impact areas strengthened with CSM and roving. The transom is constructed by a sandwich of marine ply sealed under GRP. There is a choice of colours for the deck, console and hatches.
Numerous optional extras are also available. Just phone Natal Caravans & Marine and tell then what you want, and they will advise you further.

CONCLUSION
This is a very affordable all-rounder boat that would be light on fuel and you can fish her in dams, rivers, estuaries and offshore. This is the type of boat that would be good to take to the Wild Coast, because you’ll be able to carry her the 100m or 200m along the beach in areas where you’re not allowed to drive on the beach.
Have a closer look at one, and I’m sure you’ll be most impressed.