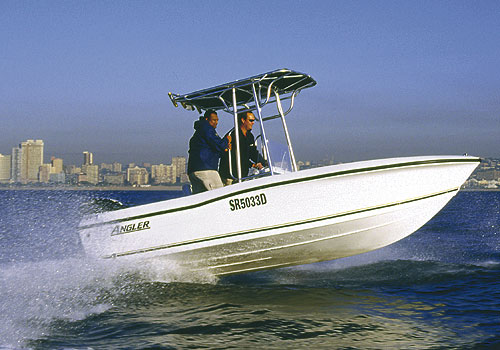 NUWAVE Marine’s Wynand Wiering is extremely enthusiastic about their imported American craft, the range of Angler Boats emanating from Miami, Florida, USA. Indeed, it was hard not to be affected by his enthusiasm and maintain a degree of neutrality until I was able to try the craft out at sea. I recall having visited the Angler Boat stand at the 2004 Miami Boat Show a few times because the style of this craft had captured my attention and interest.

For a number of reasons it took longer than expected before I was able to test the two Angler boats, but eventually in June 2005 the Angler 180F and Angler 220WA were presented to me for trial.

GENERAL IMPRESSION
New, imported craft always evoke a strange degree of fascination, yet to some they also present a dilemma. On the one hand, for some reason we tend to think imported products are automatically better; on the other hand, there’s the feeling that we ought to be loyal to local products — a concept that the media is constantly drumming into our heads.

My experience has shown that the flow of imported craft into South Africa not only extends our own manufacturers’ thinking, but also gives us opportunities to experience the latest in both hull design and hardware available from the big overseas manufacturers.

Indeed, I was enthralled with the ideas Angler Boats had incorporated into their craft, as well as the new styles of hardware and overall finishes.

CONDITIONS FOR TEST
It was a magical mid-winter’s day and the sea had a lazy swell over which the winter land breeze — the NNW, as the weatherman likes to call it — blew at a steady 6-8 knots. Closer to shore this wind flattens the sea, but further out — as it blows sideways into any prevailing sea on our part of the coast — it tends to put up an awkward chop.

It was the ideal sea in which to try out the Angler 180, an 18ft centre console craft powered by a single Mercury Optimax 135hp outboard motor.

LAUNCHING AND TRAILERING
The Angler 180F was towed from Johannesburg to Durban on an old EZ Loader trailer behind Wynand’s 4×4. “I didn’t even know it was there,” said Wynand, after arriving in Durban. Watching the ease with which this boat slid off the EZ Loader and the subsequent reloading of the craft, I wondered afresh why this make of trailer hasn’t held more market sway here in South Africa.

I owned one years ago and couldn’t fault it. With all the rollers moving to accommodate the hull’s varying shape as it rolls off or while being driven or winched up, I reckon this is the ideal design for a trailer. 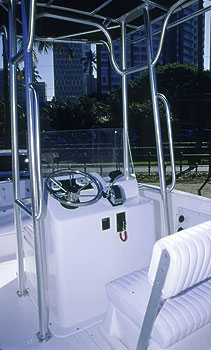 MOTORS AND CONTROLS
A centrally-mounted Mercury Optimax 135hp motor had been selected for this 18ft centre console craft, and it certainly provided more than sufficient power for any offshore sportfisherman’s requirements. I would even go so far as to say that it’s too much power, and a single suitably-propped 100hp motor would be enough, even for surf work.

With the motor swinging a 19-inch pitch prop, her performance was electrifying — and at no stage did I fully open the throttle. Wynand had fitted a push-pull steering which was adequate, but I would like to see hydraulic steering on this craft if that much power is hanging on the transom.

Smooth controls are a must, and Mercury’s standard side-mounted control system provided a very smooth throttle. An easy-to-locate trim-tilt button is incorporated into the throttle handle. 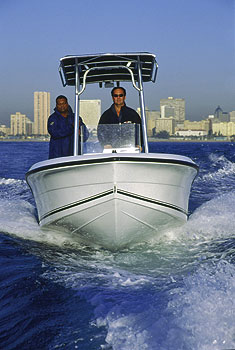 HANDLING
Watching a craft at sea before clambering aboard and taking her controls often gives one mixed expectations. So it was with the Angler 180F.

From a distance she gives the impression of being a moderately-sized craft carrying a big motor. In reality, however, once I had boarded her and taken over the controls, this 18 footer seemed to expand radically. Her width immediately impressed me, and it was soon evident that she had the sea-going capabilities of any craft in that range, in spite of the single-engine restrictions.

Before I began the test I had to come to terms with the single, big motor. In reality, this power is comparable to having twin 60 or 70hp motors, and with this in mind I started experiencing and enjoying the craft within her target applications.

The Angler 180F has an open centre console with a substantial, robust T-top that has been designed for more than the restricted inshore fishing a single engined craft is permitted in South African waters. In the USA — the market she was designed for — the single motor is not a limiting factor, hence her inherent capability to cover distance and take on seas a lot rougher than one would expect in the inshore area she is restricted to in South Africa.

I pushed this craft hard in the flat water and out in the sharp chop created by the land breeze that was gusting, especially off the Umgeni River mouth where the wind channels down the Umgeni Valley and out to sea. By combining speed with chop, one is able to appreciate what this craft’s hull is capable of and imagine what she would be like at slower speeds in a moderate to rough sea.

The Angler 180F has an extremely soft ride on a very flat trajectory, and even with hydraulic trims this craft tends to run at her designed position. Only radical trim adjustment alters that. It is highly likely that, with a lower powered motor, trim may have a greater effect, but with the 135hp Mercury Optimax swinging a 19” pitch prop, her top-end speed was electrifying, even rather intimidating.

During a number of tight turns and out-of-the-hole trials I was taken back many, many years to the days of big single motors on small, surf-launched boats which were steered with a tillerbar — no centre console steering back then. Now I had the same feeling as I whipped her into a turn in front of a wave, cut back radically on power until her bow was facing the correct direction, and then opened her up to shoot out of the hole and onto the plane. I had forgotten how different this was to the twin-motor operation we have become so used to during surf work these days. 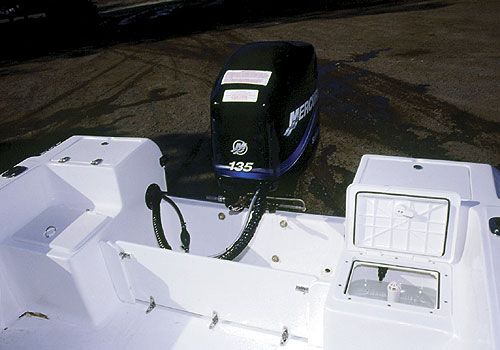 In discussion after the test, Wynand agreed with me that, with a motor that size, hydraulic steering would be preferable to the push-pull cable steering fitted to the boat.

When pulling her out of a tight turn, I found that if I tried it without cutting power, it was not only difficult, but the motor also experienced a degree of prop slip (cavitation). However, with the right techniques she would handle a big surf with ease.

During trolling trials at various speeds, her aspect to the water was marginally stern-down, thus allowing the forward hull design to deflect the spray downwards and keep those of us aboard dry.

Being a monohull with a fairly steep vee’d hull design, she was a lot more stable on the slow troll and while drifting than I had anticipated. We’re so used to the stability of cats these days that we tend to forget that monohulls are more sensitive to sea conditions. Silan Naiker of Lowrance, who was with me during the test and whose boat, like mine, is also a monohull, loved the ride of the Angler 180F. In fact, she was so stable that there was very little lateral movement when I trapezed from the T-top structure while standing on the lee-side gunnels, with Silan standing next to me on the deck.

I compounded the very small following sea that was available with speed to see how she would cope and if there was any indication of yawing. This can be quite frightening with a monohull, but I found no tendency of this malady in the Angler 180F. However, in all honestly the sea was not anywhere near big enough to really get the feel of what she would do in a big following sea.

DECK LAYOUT
The Angler 180F has a very simple deck layout that is very practical for the style of fishing for which she has been designed.

The centre console is situated virtually midships and has an extremely robust T-top — or Bimini top as it’s called in the ’States — with the supports and structure made from marine grade aluminum. This provides the skipper with all the comforts he needs while commanding his craft.

Only so much can be fitted within the confines of the centre console, so my criteria are practical ones: Is it comfortable and is it protected? The Angler 180F was both. 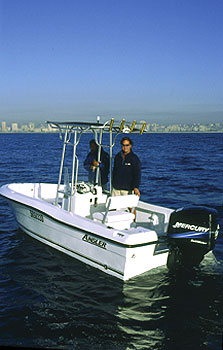 An upholstered seat is incorporated into the front of the console itself, and there’s a fairly large, flat deck that covers the bow area ahead of it. There is ample area to fish upfront and the flat decked area of the bow is both stable and large enough to accommodate a flyfisher casting a fly.

Behind the skipper’s tram-style seat, the fishing area is large and well laid-out with wet hatches and a circulating livebait hatch in the false transom. These also have upholstered seats that provide additional seating when the hatches are closed.

I found that the ability to move past the centre console to the foredeck, or vice versa, with ease made it very practical from a fishing point of view.

Whilst there is adequate storage for rods tackle and accessories — both wet and dry — the storage of one’s catch is limited to a small wet hatch.

FINISH
With the use of an integrated top deck moulding, the internal and external finishes are of a very high standard. There were numerous aspects of the finishing off of the craft — like hardware, non-skid deck and T-top construction — that caught my eye and which I found to be both sturdy and practical during our time spent at sea.

Soon after boarding the Angler180F, one becomes aware of and appreciates all that is provided in this style of production craft. Not only has she been designed for practical use during offshore fishing, but once ashore after a good day’s fishing she’s easy to hose down and clean up.

Yes, I found a number of ideas and styles of finish that I liked, and I learnt a lot during the time I spent aboard her.

CONCLUSION
In the ’States the Angler 180F is promoted as a user-friendly family and fun boat which will satisfy the full range of watersports requirements — skiing, fishing or family cruising — on protected waters. Comfort, stability and safety are part of the deal.

I would concur with all this, but I would like to add that from a light-tackle offshore fishing point of view, she’s a lot more than just a leisure craft with offshore capabilities. Indeed, her excellent fishability makes her a very worthy fishing partner.