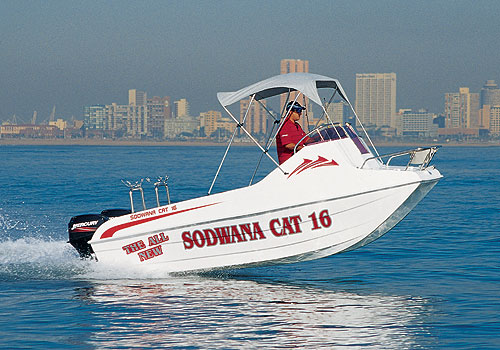 KEEPING up with the times is what the boating game is about nowadays. As a manufacturer or dealer you have to stay current with the new designs and looks when it comes to boats, otherwise you are going to be left behind.

In February 2006, Nick Landzanakis of Natal Power Boats launched the Sodwana Cat 156. Just over a year later, Natal Power Boats, Mallards Marine and Nuwave Marine joined up their resources and expertise, and are now a serious force to be reckoned with. They’ve started off well and have already introduced the “all new Sodwana Cat 16ft” to this incredibly competitive market. This boat is manufactured by Jerome Rai from Bluewater Boats in Durban, exclusively for Mallards Marine.

Although it’s essentially the same boat which we reviewed in the January 2006 issue of SKI-BOAT, they have given the hull a new, improved look and have made many other changes in a number of areas to make the craft more user-friendly for fishermen.

GENERAL IMPRESSION
My first sight of this craft was at the Mallards factory in Durban prior to the boat test. The differences between the 15’ 6” and 16’ craft were immediately obvious, most noticeably the changes to the top deck which has been completely remoulded, transforming the boat to suit the current trends.

CONDITIONS
The day was perfect — clear skies, an ocean made of glass and warm soft sunlight. Although it’s lovely going to sea on a day like this, these conditions actually make it extremely difficult to test the boat thoroughly as there is no swell, no wind and no rough chop. Rough conditions in fact give one a much better indication of the true handling capabilities of a craft. All the same, it was nice to have the ocean at its best for a change. 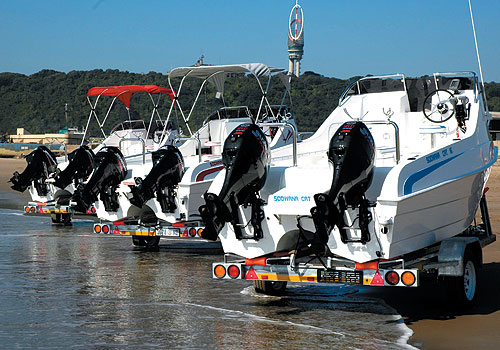 MOTORS AND CONTROLS
This particular test was quite unique as I had three 16ft Sodwana Cats to test, the only difference between the boats being that they were fitted with different motors. One craft was fitted with twin 40hp 2-stroke Mercurys, another with twin 50hp 2-stroke Mercurys and the third with twin 60hp 4-stroke Suzukis. This was very beneficial when working out the motor size best suited to the craft.

I found these motors were good on acceleration out of the hole and maintained a fair top-end speed of approximately 28-30 knots in the flat conditions. A standard cable steering system was fitted which turned with ease and was smooth. Controls were also smooth and simple to operate.

The extra 10hp made a huge difference on the Sodwana Cat 16ft. Out-of-the-hole acceleration was faster than with the 40s, and they maintained a higher speed of 32-35 knots at slightly lower revs. The steering system and controls fitted were the same as on the craft mentioned above.

These motors were completely different to the 2-strokes. They were extremely smooth and quiet, power out of the hole was good, and she easily held a top-end speed of around 35 knots without the throttle being fully opened. The steering system was the same as on the other two boats, but I did find that these controls were exceptionally smooth.

Of the three sets of motors, my choice would be the twin 50hp Mercurys or the 60hp Suzukis. Personally, I like to have extra power on any boat, especially if it’s going to be surf launched or will have to carry heavy loads. One big bonus with these craft is they’re very economical on fuel.

LAUNCHING AND TRAILERING
Being fairly small, lightweight cats, these boats are relatively easy to handle in all aspects, from towing with standard 4x4s, to dropping them off the trailers and re-trailering. The Sodwana Cat comes on a standard, galvanised breakneck trailer. As the conditions were so flat, the boats were dropped deep into the water at Durban Ski-Boat club, coming off the trailers with ease. Once the test was over, it was again a simple task to re-trailer the Sodwana Cat on the beach. 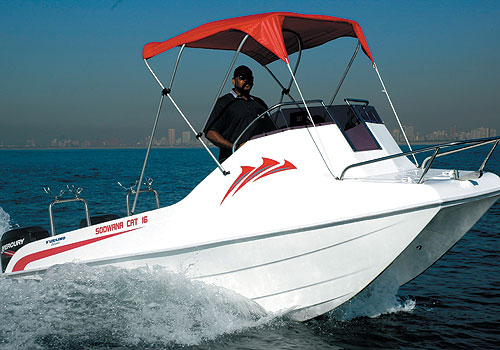 PERFORMANCE
Luckily for me, there were no distinct differences in the handling of the three boats. Having the correct power balance on these craft, they jumped onto the plane quickly. Nowadays, trim-and-tilt motors are becoming the norm on most craft, and having trims on these boats made it relatively easy to get a good ride going.

Raising the bow up slightly definitely softened the ride and pushed the spray off the chines further back. In the flat conditions you could push the speed up to 25 knots at around 4 500rpm, while still maintaining a comfortable ride. Our ability to achieve consistent speeds like this was due to the ultra-flat conditions.

Considering that so many of our launch sites on the Southern African coastline are through the surf, I always feel it’s necessary to try to simulate surf launching on a test. The most important areas to check are the power, responsiveness and stability of the craft.

As previously mentioned, the acceleration out of the hole was good, with minimal cavitation when in full lock to port and starboard. In comparison to the larger boats, these cats spin around exceptionally fast on a very tight turning circle — just what you need for tricky surf launches. All three were fast onto the plane, and it wasn’t necessary to push the throttles past three-quarters to maintain the decent top-end speed needed for surf launches, although the 50s and 60s had the edge on the 40s.

Due to the flat conditions, all I could do was try to find some type of swell or freak chop to bounce the boat on to check for any signs of banging or excess spray. When I did manage to get the Sodwana Cat slightly airborne off the odd swell, I did not detect any major slap on the hull. When watching the splash and spray off the hull, it was deflecting more off the stern section, keeping the ride completely dry. In these conditions I found the ride to be very comfortable, with good stability in all areas considering the boat’s size. These hulls are now foam-filled, which might account for their more solid ride.

Easing off the throttles, down to slow- and fast troll speeds, the Sodwana Cat again was comfortable and stable, and I’m quite sure that the boat would handle fairly rough conditions in a similar fashion. On the drift — more like a dead drift — the main area that I checked was the stability, which was good when moving around on the deck.

The previous test on the Sodwana Cat 156 was done in rougher conditions. This test can be viewed at for comparison purposes, as the hull is the same on both craft. 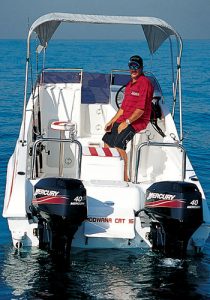 LAYOUT
The layout of the Sodwana Cat is spacious for the boat’s size and is practical. With the forward console, there is ample deck space to move around. On the deck there’s a fuel hatch that carries 4 x 25 litre jerry cans and which serves as a seating area, and two swivel stools behind the console area. The gunnels on this new model are higher than before. In my opinion this is better, as one is able to balance against them when fishing, and they help to keep the boat drier.

This new model has fully-moulded fish hatches of a fair size, rod holders that are recessed into the gunnel panel, an integrated livebait well and battery hatches, and a collapsible shade awning for the hot days. The deck area was non-slip which also makes for easier cleaning at the end of the day.

The console area is uncluttered, with neatly fitted controls and ample cupboard space for stowage. The centre of the windscreen can be removed, allowing for simple access to the anchor hatches. Other features include a stainless-steel bow rail, as well as dual roll bars with rod holders.

With its spacious, practical layout and good handling capabilities in reasonable weather, these boats are well suited to both the weekend angler and the serious fisherman.

FINISH
From the layout to all the small fittings, the new Sodwana Cat is nicely finished off with quality trimmings and striking lines, giving her a super modern look.

CONCLUSION
This is yet another small cat that is perfect as an entry-level fishing boat, or even for the serious angler who doesn’t want anything larger. What’s appealing about these boats is how simple they are to operate, handle and tow. With their general versatility you can comfortably and safely use them at sea or even on the dams.

Indeed, if you are in the market for a craft of this size, this 16ft craft is well worth having a look at and taking for a test drive.