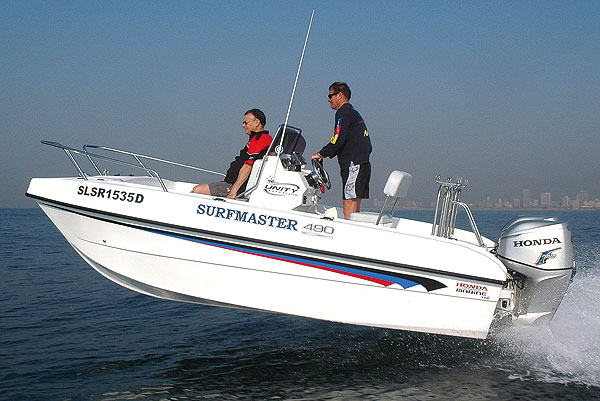 WHY is it that whenever you plan to go out to sea the weather turns foul the day before so that the sea is totally on its head? Or, at the opposite end — the sea turns out like a lake?
This is precisely what happened when I went down to the Durban Ski-Boat Club to test two of Tony Lindhorst’s new centre console boats, the Unity Surfmaster 490 cat and the 4.85m Unity Tiger mono. The Tiger’s test appeared in the previous issue. I had been told that even though he is situated in the Vaal region, Tony still sells plenty of deep sea boats that his customers also use for fishing on dams and rivers when they can’t get to the ocean.

GENERAL IMPRESSION
This was the first time that I’d met Tony from Honda Marine Vaal and I was most impressed with how excited he and his crew were about their products, and how aware they were about the importance of customer satisfaction.
Just by glancing at the vehicles and boats, I was immediately struck by the professionalism and obvious pride portrayed by the corporate image on display. Indeed, first impressions do count. When equipment looks like this, you know you’re not dealing with amateurs. Dealing with friendly, down-to-earth people like the Honda Vaal team also makes a difference to your attitude towards the craft on trial.
Looking at the Surfmaster cat for the first time, I liked what I saw — a clean, snow-white craft, and neatly finished off. However, not much time was allocated to initial viewing of the boats out of the water, as it seemed the Honda Vaal crew were even more exited than I was to set their craft upon the ocean, so into the water they went … 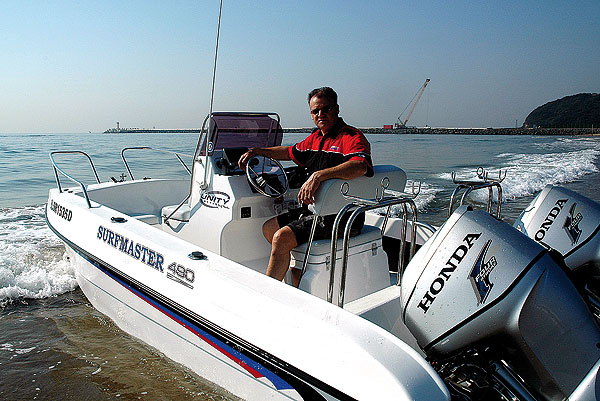 LAUNCHING AND TRAILERING
These two boats had been towed down from Johannesburg at an average speed of 110km an hour. The Surfmaster fits perfectly on the trailer, and when towed onto the beach we didn’t have any hassles with the trailer’s tracks not lining up with the car’s tracks.
I hooked her on to the front of my 4×4 and offloading her into the water was very easy. After the test I retrailered her: the Surfmaster has to be one of the easiest boats to pull onto the trailer because she fits so snugly. There’s no room at all for the boat to move around.
I think it would also be just as easy to load the Surfmaster straight onto the trailer after a trip on the harbour, river or dam. You should be able to drive her up and onto the trailer once her bow is on the first rollers.

MOTORS AND CONTROLS
Despite not being warmed up first, one touch of the ignition and I had the Honda four-stroke motors purring on the transom. The test Surfmaster was fitted with two 60hp four-stroke Honda engines with an hydraulic steering system and binnacle mount control boxes. Personally, I like the binnacle mount controls — they seem to be smoother and also look very neat.
These engines ran so smoothly and quietly that I had to look around every now and then to see if they were still running. 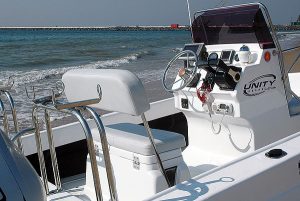 PERFORMANCE
I had Tony Lindhorst with me on the boat. It’s always good to have someone along with you when you test a craft, because besides getting a better indication of how she would react with more than just one person aboard — and because Tony “knows” his boat — he was able to point out all the hidden “niceties” of the Surfmaster.
Before I tested the Surfmaster 490 cat I had the opportunity to test the Unity Tiger mono with two 30hp Honda four-strokes on the back. This allowed me to compare the difference in power, going from twin 30hp engines to two 60hp motors.
Being fitted with twin 60hp Honda four-strokes, she was extremely fast. In the calmer waters you could cruise comfortably at around 20 knots at only half-throttle without having to adjust the trims. The Unity Surfmaster 490 had no problem accelerating from full lock either to port or starboard, with little or no cavitation, and she gave a smooth, stable, dry ride. From a standing position she shot out of the hole like a rocket.
I had to pull out all the stops to judge her performance in the strange sea we were presented with that day — it looked smoother than Hartebeespoort dam. This was the flattest sea I have been on in a long time, and while it’s great to have good weather, it makes it very difficult to test a boat. Eventually I had to use the wake of the photography boat to assess how the Surfmaster would react in rougher conditions.
Running out with the swell, she performed as well as she had in the calmer waters. The Surfmaster cut through the swell smoothly, necessitating only minor tweaks to the trims. Even going over the wakes of the other boat — both slowly and at speed — we stayed bone dry. Staying dry is a big priority for me.
Another characteristic that impressed me with the Surfmaster was that the hulls did not bang when dropping over the swell and chop.
For a craft of her size, the 490 is a relatively wide cat, which definitely helps with her lateral stability. She did not roll excessively with the side-on swell, whether stationary or when travelling at a fairly high speed.
When turning to port and running with the swell, I could maintain a constant speed without ploughing or broaching into the trough, and could easily accelerate out of the troughs with the ample power of the twin 60s. 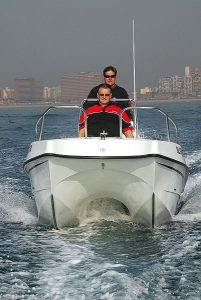 If you ride a boat like a gentleman, not a cowboy, you can create a suitable, comfortable ride even in the worst of conditions. At a reasonable speed, as well as when accelerating and decelerating, the 490 was able to cut softly and comfortably through the water, without sending shockwaves up my spine.
Most of the time smaller boats handle well in fair-weather conditions, but because of the general handling of the 490, I am confident that she would maintain all these characteristics even in a rougher sea. When stationary in the simulated rougher conditions, very little water flooded over the transom, and even when it did, it drained out again fairly fast.
A word of advice: if you can afford motors with trim-and-tilt, get them. Having all the extra bells and whistles definitely helps when you need to change your ride to suit the conditions. However, if you don’t learn how to use the gadgets properly in the first place, they’re not going to help, so make sure you get proper training on all your boat’s facilities.
At slower speeds, from idle to a trolling speed of 2-4 knots, the 490 maintained good stability in all directions. Considering her size, she has plenty of deck space. From a fishing point of view, this allows for good manoeuvrability around the boat. For general offshore fishing you could comfortably fish two or three anglers. Besides, this craft would work exceptionally well for deep sea flyfishing where deck space and stability are the main considerations.
The 490 has reasonably high gunnels which I find easier to balance against, making it more comfortable when fighting a fish.

LAYOUT
As mentioned, the Surfmaster 490 I tested was fitted with two 60hp Honda four-stroke motors. All the cables coming off the motors were neatly tucked away, running under the deck to the centre console, thus leaving an uncluttered area to move around in near the transom.
Honda Marine have fitted a livebait well in the stern between the engines, and on both sides they have trolling bars in front of the engines with rod holders attached. On the port and starboard gunnels they have fitted flushmount trolling rod holders. Both sides have storage space for rods.
When it comes to the centre console, all the electronic equipment has been very neatly fitted. In the front of the console there’s a comfortable seat with a storage hatch beneath it. Behind the console there’s another swivel seat with a storage hatch underneath. Fish hatches are situated on both sides in the deck, and the anchor hatches are upfront.
Indeed, the deck layout has been designed to suit the fisherman by creating as much open space as possible. 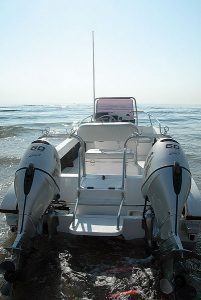 FINISH
For an entry-level boat at this price, the Unity Surfmaster 490 has a really good quality finish. From the trailer to the hull to the fittings, everything is well balanced and has been fitted with precision and in proportion.
The normal scenario when purchasing something is that if you get it at a reasonable price, you will probably get a “reasonable” product. With the Surfmaster you’re paying a reasonable price and getting a good product.

CONCLUSION
The Surfmaster 490 is a very practical craft for the general offshore fisherman and first-time buyer. If you want a boat that is relatively small, light, only requires two or three people to launch, can withstand fairly rough conditions and handles really well in the surf, then the Unity Surfmaster 490 is a boat you should look at. Although the 490 was tested with the 60hp Hondas, I feel that she would run just as well with 40-50hp motors.
Besides the Surfmaster 490’s offshore capabilities, she is also suitable for fishing, waterskiing and general family fun on dams, in rivers and estuaries, especially for those anglers/boaters with access to the Vaal.