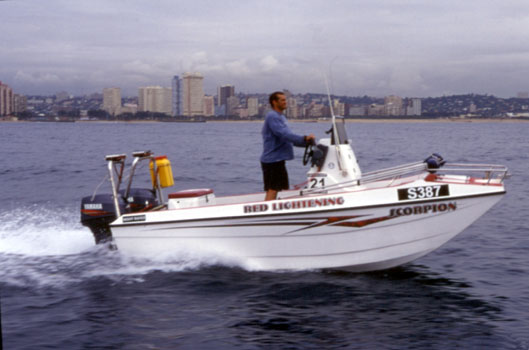 It never ceases to amaze me how many innovative ideas boat builders can come up with. What’s even more amazing is that once ideas start crystallising in a boat builder’s mind, he has to convert them into reality on a craft and thereby prove that they can practically work.

One noteworthy boat builder is Doug Smith. Not only did he have the ideas, but the ideas had to be formulated within very strict functionality constraints. The result? After eleven months of design and mould building, the Scorpion Cat 156 centre console was finally launched.

So, does the Scorpion have a sting in the tail? Read the test … or, better still, chat to Doug and take the Scorpion for a run at sea.

GENERAL IMPRESSIONS
I was adrift at sea on SeaLord — just behind the shore dump — awaiting the Scorpion 156. This was the first time I had really had a good look at this breed of craft, and pulled behind the black Colt Club Cab she looked really good.

I noticed that her shoulders were bigger than I remembered, and this feature would manifest itself during the test later that morning. Otherwise, she made a pretty picture on the beach at Durban Ski-Boat Club on a very dreary, overcast morning, and she was soon in the water, ready for the trials to begin.

CONDITIONS FOR TEST
It was a great day for fishing, but not so good for boat testing as the south-westerly had dropped in strength overnight with not much more than five knots blowing in the morning.

The sea around Vetch’s Pier was calm, but a small swell was still apparent, both along Durban’s beachfront as well as out to sea.

Fortunately, out off South Pier the chop over swell had not completely flattened and, for the size craft I was on, there were enough lumps, holes and swells over which to put her through her paces. 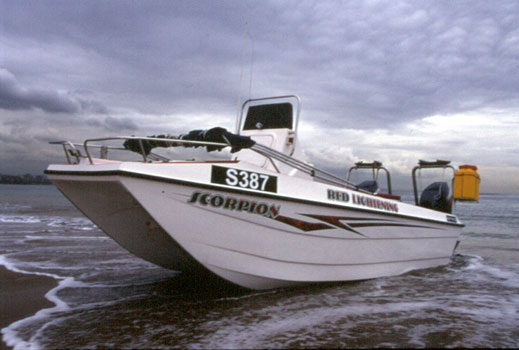 LAUNCHING AND TRAILERING
The speed at which Doug, with the assistance of SKI-BOAT’s Mark Wilson, had the vehicle turned around and the trailer hitched to the front, ready to be driven into the shorebreak, had me readdressing the need for big boats. There was just no comparison between the effort needed to launch my SeaLord and the short time and ease with which the Scorpion 156 was put in the water.

By the time Doug had parked his Colt after an easy bump off, Mark had turned the craft and they were ready to put to sea.

What I hadn’t realised until the craft had been winched back onto the trailer was that Doug had not bothered to deflate his vehicle’s tyres. Despite this, throughout the recovery and the reverse tow back to the parking lot, she showed no tendency to dig into the soft sand ploughed up by the dozens of vehicles and tractors which had used the beach over the preceding weekend. While I don’t condone not deflating tyres, it proves just how easy it is to handle a relatively small rig as compared to bigger boats. It also speaks volumes for the Colt 2 800 4×4.

The trailer, which is breakneck and galvanised, is also manufactured by Doug and is tailormade for the Scorpion 156. As such, it worked perfectly during both the launching and retrieval exercises. 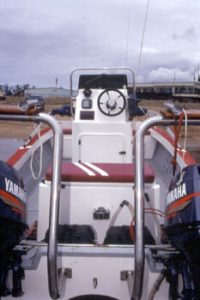 MOTORS AND CONTROLS
Red Lightening had been fishing hard for four months since she was launched for the first time, and her twin 40hp Yamahas, controls and steering were therefore well run-in and I had no qualms about extracting maximum performance from this rig.

Yamaha’s “workhorses”, the 40hp motors swinging standard 11Kx12 pitch props, provided all the power needed for the Scorpion 156 with two of us aboard. I don’t believe that additional power would have added anything to this craft’s overall performance.

Not only did I appreciate the smooth running of the motors and their quick response to throttle, but they also produce very little engine noise at low trolling revs.

The throttle/gear control system was smooth in operation and offered direct response in gear selection and throttle adjustment.

Centre console stations are usually skipper-friendly, especially on small boats, and the Scorpion 156 was no exception. The steering and throttle positioning was comfortable and practical, even in the tightest of manoeuvres.

HANDLING
Way back in 1977 I undertook my first boat test. The craft was a small cat, and since that day there have been three criteria at the forefront of my mind when I assess a boat of this kind: lateral stability, aft buoyancy and “kiting”. Indeed, that “first” boat had me a little nervous, to put it mildly.

Most important to me is kiting. A light, twin-hulled craft will have air forced under its bow and into the tunnel when moving into a moderately strong wind. It’s a factor which most boat builders of this style of craft take into account and use to the craft’s advantage. However, if after coming off a swell the speed and wind is such that the craft doesn’t want to return to the water and rather acts like a seagull, it’s very disconcerting indeed to those on board. The other two criteria speak for themselves.

The Scorpion 156, let me hasten to add, did not reflect any of these bad tendencies, no matter how hard I tried to get her to perform the kiting trick. It is, however, something that one must always be aware of, because under strong wind conditions running into the sea at speed can be dangerous.

After taking control of the Scorpion 156 on that dark and dreary morning — and while waiting for good enough light in which to take photographs — I took her for a long ride. 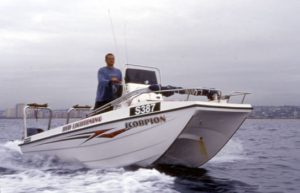 In the flat water off Durban’s beachfront she jumped out of the hole with alacrity, and we headed out in a north-easterly direction. With the wind and the swell on her beam, I watched and felt the reaction of her hull on water and judged the speed as we made good progress towards No. 1 fishing ground. Under the prevailing conditions — which were not extreme — she rode the water very comfortably, throwing whatever spray there was far aft and not even wetting Doug who was sitting on the aft above-deck upholstered hatch.

Then came the main test as I swung her bow into the wind and sea, while retaining the same throttle setting. Her re-entry after coming over a swell/chop was soft and largely devoid of a pound. By increasing speed significantly, I got her to jump many times, trying to simulate a possible kiting tendency, but each time she returned to water softly, cushioning her re-entry, and sped forward while continuing on her course.

Don’t get me wrong, safety at sea is a combination of the boat’s ability, the degree of forward momentum and the condition of the sea. It’s the skipper’s responsibility to combine these into a safe and comfortable ride for the sake of the crew, the boat and himself.

After getting very good marks during the first part of the exercise, we arrived at the “boiling pot” between South Pier and Cave Rock. As usual, the sea was a little upside-down, with no discernable pattern to its behaviour. As I had come to try her in the big swells that normally wrap around the end of the Bluff, I had to first test her tight manoeuvrability in the rough stuff before heading for the backline.

With her controls, steering and motors already having been run in, it was a pleasure executing these manoeuvres without fighting new and tight equipment.

This craft also responds extremely well. She swings into a turn very easily and also pulls out of a full lock turn under a lot of throttle remarkably quickly with apparent minimal effort. With no cavitation at all being experienced, her props grip straight away and push her out of the hole at speed.

Be it slow or fast port or starboard turns, she was good — very good — and to answer the question I asked earlier, no, the Scorpion certainly does not have a sting in her tail. Indeed, this is a craft I would take into the surf without any hesitation whatsoever

In the rough stuff I tried her on the drift and at slow ’cuda speed for a considerable time. During this trial, Doug and I moved around the boat a lot and even hung over the transom to prove her stability and the fact that she takes no water over the transom.

At fast troll while out at sea, there wasn’t sufficient chop nor wind to test whether she threw spray during what I consider to be the wettest part of ski-boating.

During the long run home, with the swell behind us, she showed no tendency to yaw. However, I must reiterate that the sea was not big. 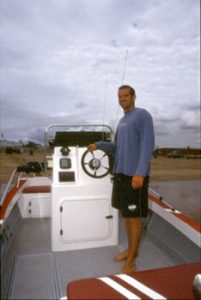 DECK LAYOUT
From the accompanying photographs you will notice that the centre console has been sited well forward, thus giving a fair amount of fishing area aft.

By the way, a forward console top deck configuration will soon be completed, thus catering for those who prefer that style of craft.

Doug says he prefers having fishing space aft and as such his original design provided a lot of buoyancy in the bow shoulder area to support forward weight distribution. This will obviously also work for the forward console model.

On the aft deck the back seat-cum-hatch acts as a livebait hatch which can, as was incorporated on Red Lightening, be fitted with a circulating pump. The two underdeck fish hatches are more than adequate, and Doug has marginally raised the hatch covers so that deck water doesn’t seep into the hatches.

Five cans of fuel are stored in the centre console — on the skipper’s side and in a smaller dry hatch in the face of the console. Also upfront, under the forward bench seat, are two cupboards for stowage. Right upfront are two anchor hatches, either of which will hold a good sized anchor, enough rope and even an “umfaan” for the ski-boater who is keen on his bottomfishing.

I have concerns regarding the placement of the two batteries which, although in battery boxes, are virtually up against the transom. To my mind, although this seems practical, it’s not the best of ideas.

FINISH
The question of cost-versus-finish is something every boat manufacturer has to contend with. Doug — who is relatively new in the business — has opted for making a sound, strong and well finished hull.

The top deck and centre console are also well designed and based on practical requirements, yet they are austere in terms of fancy finishes. What is necessary is there. The nice-to-haves are available on request but are not included in the production model of the Scorpion 156.

Doug reiterated that if the buyer wants carpets, extra stainless-steel fittings, hardwood trim and more instrumentation, all can be supplied but at extra cost.

CONCLUSION
The Scorpion 156 is a craft that one can tow behind a medium-sized vehicle and not even know it’s there. Moçambique is a playground that is opening up by the week. Craft such as the Scorpion will make the trip easily — and still prove to be a great fishing craft for light tackle fishing once you get there.

For the angler fishing at home in South Africa, the Scorpion is affordable and, as such, will surely open the door to the sport of offshore angling for a wider fishing fraternity.