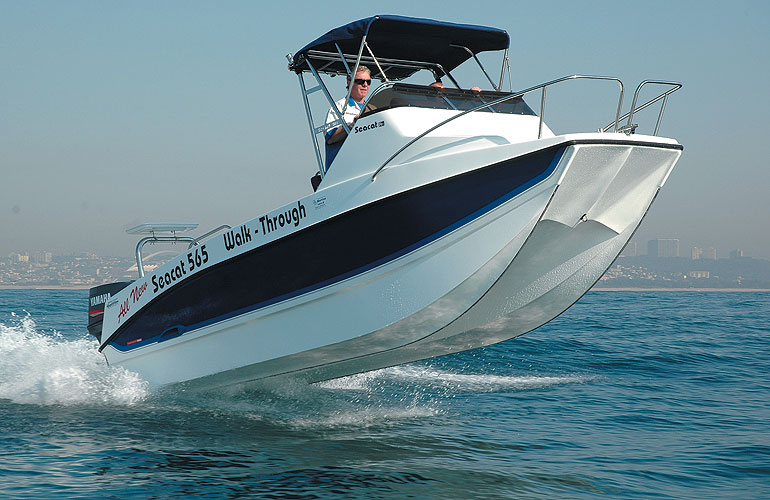 IT seems that Yamaha is determined to try to please all the people all of the time … About two years ago they launched the Seacat 565 centre console, then the forward console version, and since then they’ve been looking for ways to improve on their product. Recently they asked me to try out their new baby — the Seacat 565 Walkthrough.

GENERAL IMPRESSIONS
I’ve seen the whole range of Seacats before, so was interested to see what they could have done differently on this one. When I saw the new Walkthrough at the Durban International Boat Show in July, I was very impressed. It was clear that a lot of time and effort had gone the changes. I liked what I saw and was looking forward to giving her a good workout.

The boat has a very bold design which makes her look much larger than she really is. I had a whole crew escorting me on the test — Sean, Allison, Anthony and Stewart from Yamaha, as well as Grant Read, the man who is responsible for building all these awesome boats.

CONDITIONS
We took her out on a chilly winter’s morning with almost no wind and a sea that was all over the place — not big, but a little bit like a washing machine — with a moderate swell that was all over the place. This test were looking very challenging, not so much with regard to driving the boat, but rather with trying to take decent photos. 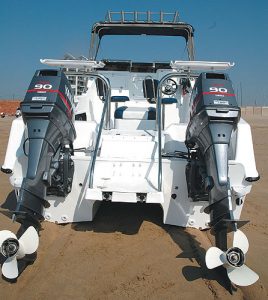 TRAILERING
As I turned into Point Road, aka Mahatma Ghandi Drive, on my way to Durban Ski-Boat Club, Anthony turned in front of me with the new Seacat. I thought it would be a good idea to follow behind to see what she looks like on the trailer. The size and weight is in line with the law, so Anthony towed her with a 4×4 and I could not see any problems, even during morning traffic.

Dropping her off on the beach was made to look very easy. We pushed the boat and trailer across the sand, then dumped her into the surf. She easily slid off the trailer with some of us aboard. We didn’t even get our feet wet.

When we returned we couldn’t beach her as the engines were still brand new and had not been fitted with beach kits, so we had to come in very slowly with the engines trimmed up. We pulled her up the beach out of the surf and used the winch to get her back on the trailer without too much effort.

If you have been doing this for years it looks very simple, and with the Seacat she just glides on to the trailer. 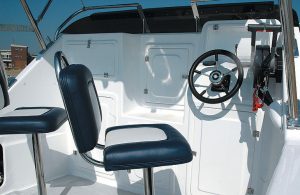 MOTORS AND CONTROLS
The new Seacat 565 Walkthrough was fitted with two brand-new 90hp two-stroke Yamahas. The controls were sidemount cable controls. At first I thought they would be stiff, but to my surprise they were smooth and soft when putting the craft both into and out of gear. I have to say that the 90hp motors made a huge difference between the performance of this Seacat and the previous ones we’ve tested. I like that she had a little more power behind her.

PERFORMANCE
Once we were out the shorebreak, getting onto the plane was effortless and quick. The low-down torque on the 90hp Yamahas is extremely powerful and I didn’t even have to change the trim settings much to get her to run smoothly.

Moving offshore the sea was not rough, just all over the place, and we had to ride the controls a bit to avoid the holes popping up everywhere.
As mentioned in previous tests, setting your trims sometimes plays a vital role in getting the ride of your boat to suit the prevailing conditions, and raising the windward sponson can eliminate the spray. I did not experience any spray coming over the front, even in this choppy sea.

From stationary and full locking into tight turns from port to starboard and back again to port, she sat tight. No cavitation or rolling to the sides was felt. Even in a tight circle she sat tight with no cavitation, which is a good characteristic for boats that are required to surf launch.

I then took her into a slow troll, and even though the sea was not nice, she performed very well both into the swells and with the following sea. Even with a side-on swell her stability wasn’t affected. I didn’t once feel that she had any shortfalls when it comes to stability. 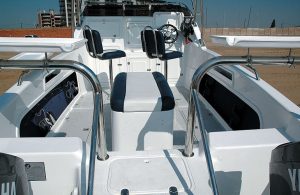 LAYOUT
This is where you notice major changes when comparing the 565 FC with the all new 565 FC Walkthrough. The forward console has been changed totally, and a walkthrough has been built in to make it easy for boaters to get to the front and put out the anchor. It’s easy — you just lift out the front part of the front window and step on to the raised tread that has been built in. You can easily reach your anchor hatch.

To complement the console area you have half-round windscreens on both sides with a removable part in the middle with stainless trimmings. A stainless T-top provides shade or protects against rain. There’s also some rod stowage in this area.

The cabin doors have been made larger so that you can access them with ease. In the middle where the walkthrough has been created, there’s a small cabin with built-in drawers for all your loose tackle. In the side of the gunnels, space has also been made for stowage of small, loose tackle items that tend to roll around. Underneath that there space to store rods.

In the stern the false transom has been made wider to cater for the anglers who want to fit Luna tubes. They have also fitted a nice big livebait well that has a pickup in the tunnel of the boat. The livebait pump is a through-hull version which does away with all the piping at the back of the boat that can look untidy. This also prolongs the life of your livebait pump.

On both sides the trolling boards have been changed to a bait-board system that looks great and will no doubt work well, reducing mess all around the boat while cutting bait

FISHABILITY
The Seacat 565 Walkthrough has the same look as all the other Seacats and could be rated as one of the best offshore craft in the market. The boat is very spacious for her size due to her wide beam and high gunnels, and as she’s a forward console craft you have a spacious fishing deck. This area is sheltered by the high console and windscreen.

At high or low troll speed she is easy to handle when maintaining a track and still provides good stability and comfort whether running into, side on or with the swell and chop. The wider beam makes her very stable and comfortable when drifting or at troll speed. The higher gunnels are definitely a plus when fighting a fish, and you won’t easily get swamped out at sea.

The new walkthrough also makes it easier and safer to drop and retrieve the anchor. All these extras and her great handling make her one of the nicest and most versatile vessels of her size on the market. This craft could be used for all facets of fishing. 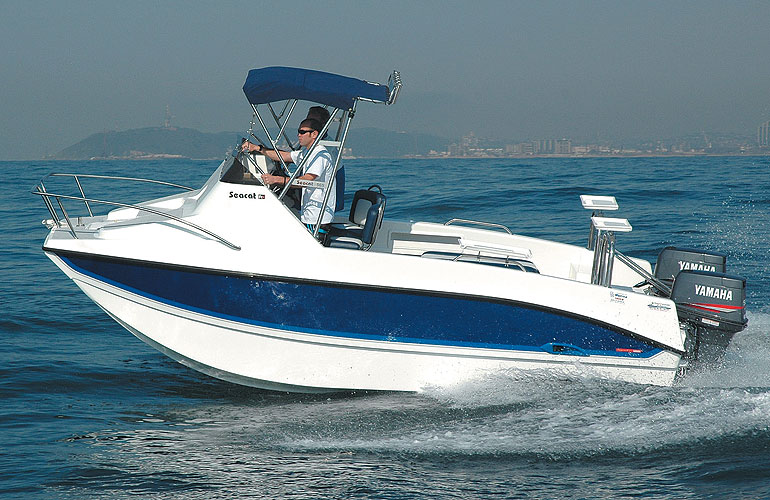 FINISH AND CONCLUSION
The new Seacat 565 Walkthrough’s finish is in the same class as all the other Seacats built by Grant Read for Yamaha. His workmanship is in a class of its own. A lot of time and effort went into this all-new version of the Seacat, and although it’s impossible to please everybody, Yamaha is trying hard and it looks like they are doing pretty well.

This is certainly the right boat to look at if you are in the market for an entry- to mid-level ski-boat with an entry-level price tag.