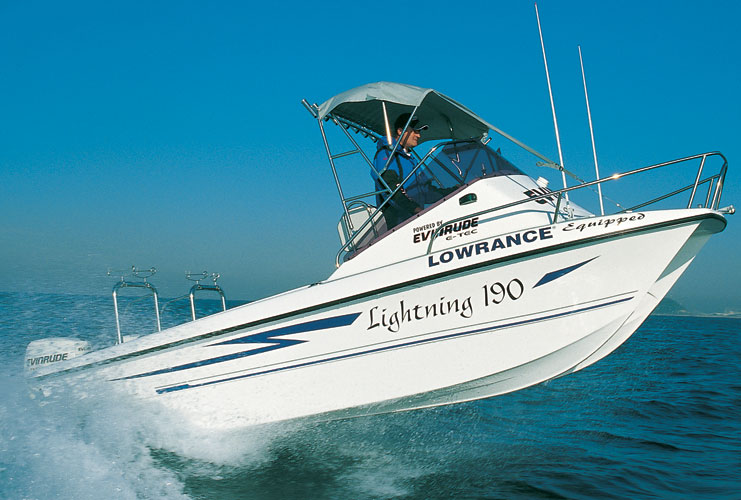 SUPERDUCK in Durban have added yet another boat to their fleet — the old Pursuit 19, which they have re-branded and are marketing as the Lightning 190.

Sometimes you get really decent boats that sort of fade away over the years for a variety of reasons, and that’s what seemed to have happened to the Pursuit 19. Personally, I have not seen many of these boats around, and when I first viewed the craft at Superduck’s premises I was pleasantly surprised at how good she looked in all areas.

After simply assessing the boat’s looks and reading the previous review on the craft done by Erwin Bursik in 2004, I could immediately see why AJ Smith from Superduck wanted to market this boat. It would be an interesting test, since we all have our own views regarding how boats perform. 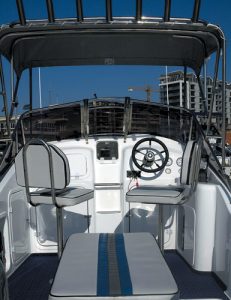 GENERAL IMPRESSION
When I first saw the Lightning 190 I found her to be quite a unique looking boat as her design is a combination of the new modern look and older, simple one. This combination includes sleek, curvy lines on the bow section which taper to a more standard sharp look on the stern. It’s quite unusual, but I liked it. All in all, the Lightning 190 still had a nice, simple and practical look to her.

CONDITIONS
When you’re doing boat tests in the middle of winter you are pretty much guaranteed offshore winds, flat seas in the mornings and good light to photograph in. That all sounds great, but it can actually make tests quite difficult as one doesn’t get to experience how the boats actually ride in bad conditions.

The day of the Lightning 190 test was one of those typical flat winter’s days, so we simply had to make the best of the good conditions.

LAUNCHING AND TRAILERING
Although the Lightning 190 is a relatively large boat, launching her into the non-existent shore break was effortless on her standard sturdy, galvanised, breakneck trailer at Durban Ski-Boat Club. In fact, it was so flat we didn’t even need to break the trailer.

Re-trailering her at the end of the day was also a simple task with the aid of an electric Warn Winch. You can hand wind a craft of this size, but it is definitely advisable to have an electric winch fitted to your vehicle to make trailering as simple as possible, and less time consuming as well. 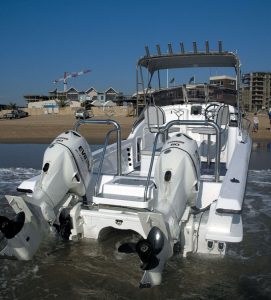 MOTORS AND CONTROLS
As tested, the Lightning 190 was fitted with twin 90hp Evinrude E-Tec motors —ultra-long trim-and-tilt models. It just so happens that the ultra-long motors are white, thus perfectly complementing rest of the craft’s colours.
Control boxes are standard cable controls and, like all the others I have used, they are user-friendly and exceptionally smooth on the hands. The steering system is hydraulic, making it smooth and very easy to turn — a definite must on all craft now days.

PERFORMANCE
A 90hp or bigger motor is probably a fairly standard size to have on a craft of this length, and I have to say that these 90hp E-Tecs were very well suited to the Lightning 190.

When Erwin tested the craft three years ago, she was also fitted with 90hp motors, but they were swinging 17-pitch props while the motors I was driving had 15-pitch props. Having 15-pitch props made acceleration from stationary exceptionally fast, and even then you could push her up to 6 500rpm without the motors sounding like they were over-revving.

For surf launching with a load on the boat this is ideal, although I would be quite happy with 17 pitch props for the surf and general use.

As mentioned in previous tests, these new E-Tecs are very quiet and economical for two-stroke motors.

The Lightning 190 is fairly sensitive on the trims, and I found that it was simple to get the boat into a comfortable ride zone relatively fast. Out of the hole she was fast, as she was when full locking in a stationary position to port and starboard. Cavitation was minimal in the full-lock position, and if there was cavitation, it was only from going a bit overboard — over–enthusiastic, that is — in the turns. The turning circle is reasonably tight and suitable for surf launches.

With most of the ocean looking like glass, I moved south of the pier to try to get a bit of swell to see how she performed in rougher water. At least there was a bit of rough water from the offshore there, and what I really wanted to ascertain was the difference this made on the craft’s low gunnels compared to the new higher gunnel boats. I anticipated that it might be slightly wetter on the stern section, but in short, the hull still gave a good, dry, comfortable and stable ride.

At low and high speeds she was soft on the water. Running directly into the swell, side-on and with it, the ride was very similar, which I can only put down to the flat conditions. In these conditions I found turning at higher speeds to be comfortable, with the inside sponson banking slightly inwards. At no stage did I detect any bite in the turns or any signs of ploughing or broaching. In bad conditions any boat can broach or plough, but if you learn to set your trims correctly and keep changing them to suit the conditions, you can eliminate most of it.

Tapping off to slower speeds and at idle, the ride was still good in all areas from comfort to stability. Again, the conditions were flat, so I can only assess how she performed for me in those conditions, but I’m certain that the boat’s generally good handling capabilities will hold firm in rougher conditions, as they did in the 2004 test.

LAYOUT
This was one area that really impressed me. The general layout on the Lightning 190 is well suited to my personal likes, and for a 19 foot craft I found her to be nice and spacious. The layout has been kept simple, yet has every thing you need and in the right position.

From the stern the false transom section is built up and houses a decent livebait well, a step-up area between the motors and dual roll bars. The deck area has good sized fish hatches, a centre-mount raised petrol hatch which also serves as seating, moulded rod racks in the gunnels, and the deck comes standard with non-slip coating instead of carpets.

The forward console area is what really appealed to me, as it has been carefully designed to maximise space. Every cupboard, nook and cranny has been moulded and recessed. Basically, there is a specific place for everything.

The skipper’s area is also well positioned and has all the necessities mounted in the correct places. As Erwin mentioned in the 2004 test, the separate fishfinder hatch is nice, but could make it tricky to read the monitor in detail. Aside from that, there is ample space to place these items right in front of you on the dash section.

To make it even more comfortable there is a T-top for shade and stowage of rods, and swivel chairs for the old timers. On the bow the access to the dual anchor hatches was fairly simple — you can either pull out the centre windscreen or get to them along the gunnels. 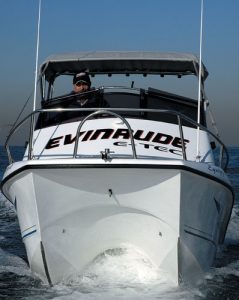 FISHABILTY
As I said, I found the layout to be particularly impressive on this boat and I found it well suited to my likes, especially on the fishing side. On the performance side, well, the conditions were flat, so stability and comfort for fishing was good all round at high and low troll speeds.

On the fishing side, good points would be the quiet motors and the fact that they are not smoky for two-strokes, there’s decent space to move around in, there’s plenty of organised stowage area for tackle, and although the gunnels are lower, this certainly makes landing fish easier.

This hull would also be well suited to avid spearfishermen due to the easy access on and off the boat.

From light-tackle to heavy-tackle fishing, the Lightning 190 is well suited to this sport and, as with most craft, you can change aspects or add bits to suit your preferences.

FINISH
From my first viewing of this craft, the finish was something that really caught my attention. With shiny, smooth and neat lines all round, the Lightning 190 has been well finished off in all areas to make her a good looker.

CONCLUSION
At the end of the day I found the Lightning 190 cat to be a good all rounder. At 19 foot the boat is neither too big nor too small to handle, whether on the water or when towing. This size and style of boat is one that’s still easy enough to take on a long trip to Moçambique, and you won’t battle to tow it with a normal 4×4.
As far as 19 foot boats are concerned, this one is definitely worth taking for a test.