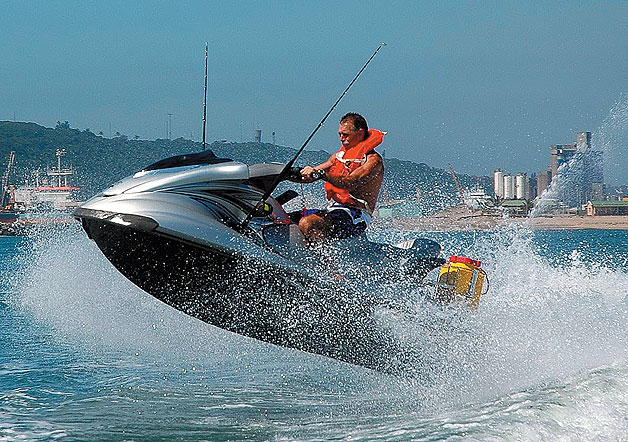 ONCE again the Yamaha crew of Greg Bennett, Shaun Lavery, and Allison Naidoo had something unique up for test — the new FX 160 High Output Cruiser Wave Runner. I have a feeling this is just the first of many reviews on jetskis that will be featured in SKI-BOAT magazine, because their popularity on our waters is increasing daily.

So, it was off to Durban Ski-Boat Club to test this new machine.

GENERAL IMPRESSION
The evolution from the first models of jetskis to the new generation ones is incredible. The new Yamaha FX 160 is proof of this, looking like it’s just come out of the latest Star Wars movie — extremely high tech and good looking at first glance. In past years the time that I have spent on jetskis and wave runners has purely been for fun, so I was keen to see how it would work as a fishing machine.

CONDITIONS
Summer can be really fickle when it comes to conditions, with strong north-easterly winds and choppy seas often being the order of the day. This was exactly what we had been experiencing around Durban when we wanted to test the craft, but after a few attempts we finally cracked perfect conditions — sunny skies, no wind and beautiful flat seas. 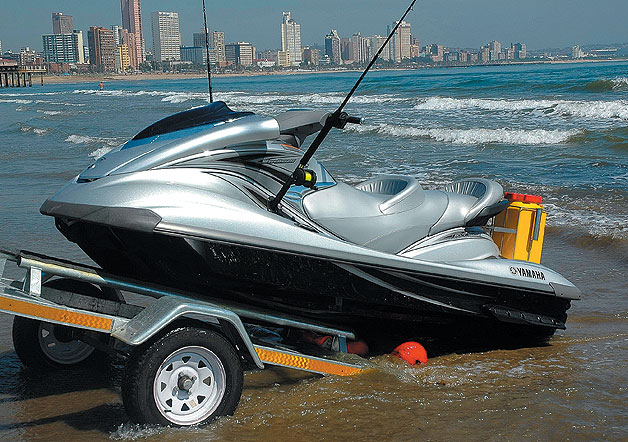 LAUNCHING AND TRAILERING
This is one area that’s completely different to normal ski-boating, as these craft can easily be managed in all areas by one person. Greg Bennett himself demonstrated the simplicity of launching and trailering the Wave Runner.

Launching was really simple as the FX 160 comes on a galvanised breakneck trailer that is lightweight but sturdy. The Wave Runner was slid off the trailer onto two small inflatable rollers, which made it very easy to manoeuvre the craft into the water, ready to launch.

Trailering was also simple due to the size of the craft and was quite manageable with just the standard hand winch. The pictures below tell the full story: it was all as easy as 1-2-3.

MOTORS AND CONTROLS
The FX 160 is powered by an 1 100cc four-stroke which, on a craft of this size, is more than ample power. It’s similar to riding an onroad bike although you’re on water. Steering is handlebar style with the accelerator being a finger-operated lever on the right side. You also have a trim setting and ignition on the left handle — all comfortable, well positioned and simple to operate. 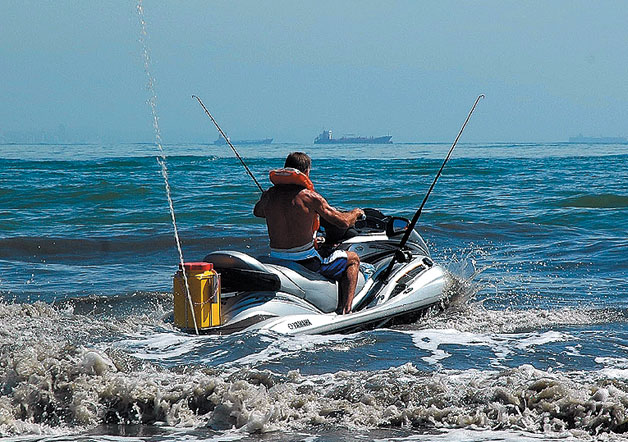 PERFORMANCE
1 100cc of oomph says it all — there is absolutely no issue with power on the FX160. Acceleration out of the hole is fast — very fast! I probably did not even get near half throttle and can only imagine the speed that you can get up to on flat waters. I found that I could cruise at a comfortable speed of around 15-20 knots, considering that it was a flat, glassy day at sea.

From stationary and at speed you can full lock the FX 160 into very tight turns, and the beauty of these craft is that there is no cavitation. The Wave Runners work off a jet-drive propulsion system that can perform well in white water as well as in shallow areas. At both high and low speeds you can put them into tight turns without wiping out: it all hinges on what you personally can handle.

Having a fair amount of weight behind them also accounts for the good handling, and in the surf zone you can surprisingly punch waves of fair size. Sure, you will get wet, but they maintain good stability and you have the excess power to run through the surf with ease. I have done it myself and have witnessed Wave Runners getting through serious surf far quicker than any other craft ever could.

LAYOUT
Although these craft were originally built for fun and racing, they are now being customised for deep sea angling. The FX 160 comes with dual front rod holders, comfortable seating that can take three — although for fishing two would be more suitable — a dash/console section including multi-functional gauges and side mirrors, and had the additional safety container housing with rod holders.

FISHABILITY
Craft like this can be fully rigged to suit the serious deep sea fisherman, but unfortunately time ran short on rigging out this one. However, I have seen them fitted with roll bars, extra rod holders, GPSs and fishfinders. In addition, the FX 160 has standard rod holders that are suitably mounted for trolling two rods.

At high troll speeds of 10-12 knots and slower troll speeds of 3-5 knots, the FX 160 maintained nice low revs as well as good stability in the flat conditions. One thing I did find was that the steering was far less sensitive at low speeds, making it a bit tricky to maintain a constant track.

With the FX 160 being a three-seater there is a fair amount of extra space available, making it more suitable for those wanting to take a buddy along. As previously mentioned, the FX 160 has good stability for a craft of its size, and this is an important factor for fishing, especially when fighting fish. I was able to stand and swivel myself around 360 degrees without rolling or flipping over when drifting. The FX 160 is also stable enough to fish with drift baits. It’s also suitable for casting from and even drop-shotting off in reasonable conditions.

Personally, I think that they are well-suited to deep sea fishing, and the proof is in the pudding for all to see. Very often jetskis come out with better results than ski-boats, as has been noted at some of the top ski-boat comps.

FINISH
Like most watersports products, jetskis are getting better and better all the time, with improved high-tech features and fancy modern looks, and the Yamaha FX 160 High Output Cruiser is a perfect example. 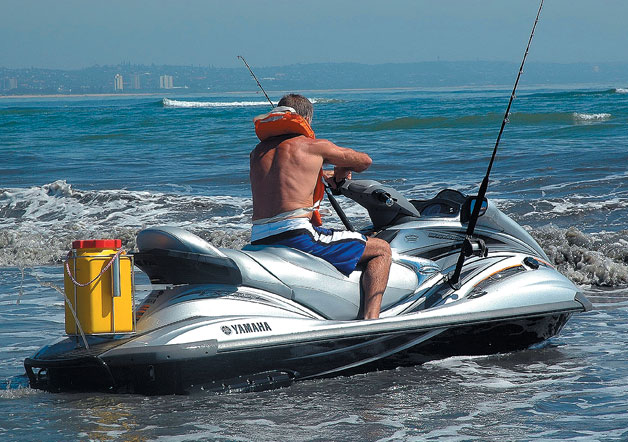 CONCLUSION
More and more of these type of craft are seen offshore nowadays, and although I was never attracted to them before, I can now see the advantages they offer. High on the list is the fact that from hooking up to unhooking them at the end of a day’s fishing, everything can be handled by one person.

They are reasonably light on fuel, can handle rough launches with ease, and you don’t have to rely on crew that always let you down. Additionally, the whole family can get enjoyment out of one of these, whether it’s on the ocean or at the dam.