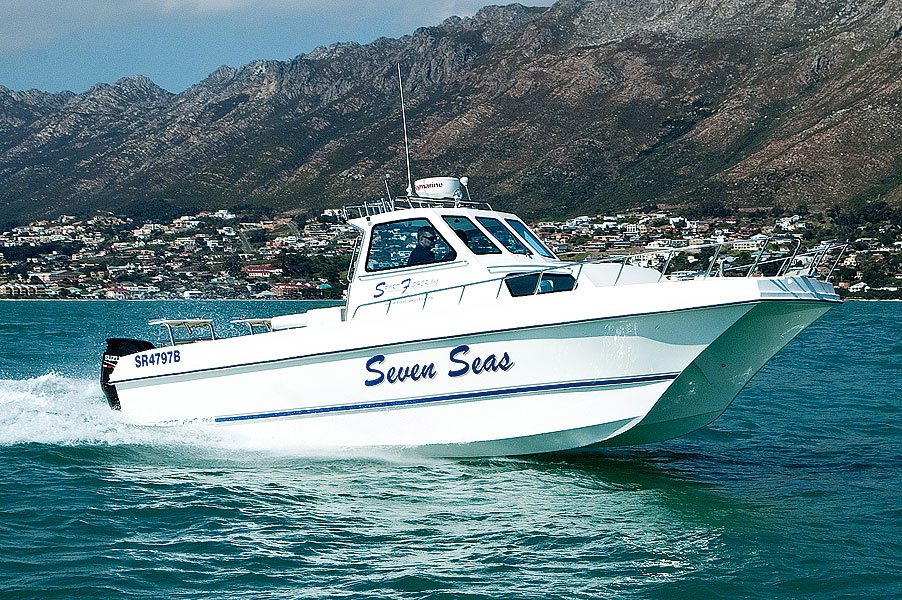 THIS is one boat test that I personally think is long overdue. Len van Kempen and Tielman Nieuwoudt from Kamassi Craft in Port Elizabeth recently asked me to go down to test their new Butt Cat 865. After much planning a boat was ready for me to test in Cape Town.
If you mention Butt Cat to any South African offshore angler, he’ll tell you that this craft has always been more favoured as a commercial brand of boat, though there are a number of them operating recreationally in the Eastern Cape.
Personally, I had only ever been on a 22ft Butt Cat and I enjoyed fishing off her. Now I was keen to test her bigger sister, the 865, which had been given a complete facelift. Kamassi Craft have done away with the old look and will be giving all the Butt Cats a modern, new look, bringing the brand into the 21st century. 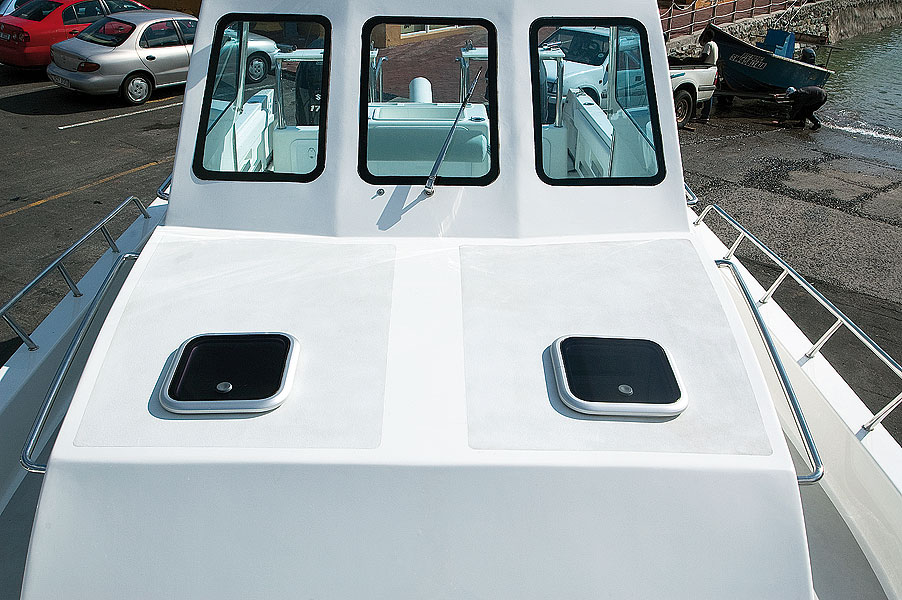 The last time I was on a Butt Cat must have been four years ago, and like all Butt Cats of old, she had a typical commercial look. So there I was in Gordon’s Bay, waiting for Steven Green, the owner of this new 865 Butt Cat, to bring her down to the water. Brand new and snow-white with tinted windows, she came rolling in behind a tow truck.
She looked amazing, and as I looked around at the other people on the marina, everybody was staring at this magnificent sight. She’s a real eye-catcher on her trailer, and even more so when floating beside her moorings.
I really liked what I saw and was very impressed at what Kamassi Craft have achieved with this boat.

This is not your everyday boat to be towed around, but I have to say that the crew that helped launch her at Gordon’s Bay made it look easy. With the surge of the water up the slipway and off again, you have to know what you doing or it could end up being a costly exercise.
The Butt Cat 865 fitted nicely onto her double-axle trailer, and when she slid into the water she did not get stuck on the trailer like I’ve seen happen to many other boats this size. To get her back on the trailer we simply drove her back onto the rollers and tied her down. 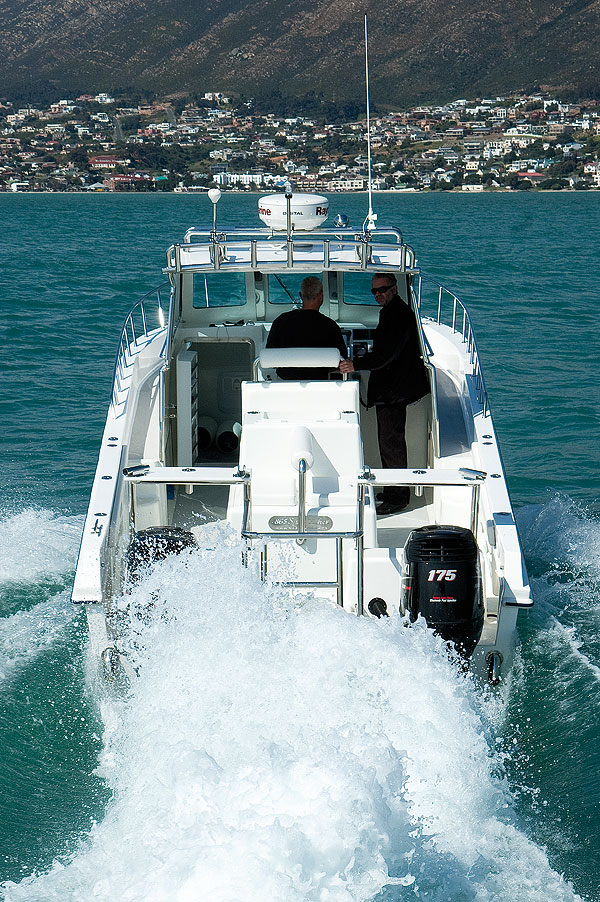 This awesome boat was rigged with two 175hp Suzuki four-stroke motors. She had been equipped with very smooth binnacle-mount controls and hydraulic steering. The smallest motors recommended for her are 2 x 140hp, and the maximum would be twin 250hp motors.

Seeing that these craft are renowned for being able to take on big seas, I was determined to thoroughly put her through her paces. The swell was running at three-and-a-half to four metres — ideal for testing this baby.
I pushed her straight into the swell at speeds of 15-25 knots. She handled it with ease and did not slam or hit the water hard at all. As a matter of fact, I had her running comfortably at 20 knots into the swell.
Her turning circle was superb in both directions, and I managed to make a perfect figure-of-eight, a clear indication that the engines were mounted correctly — especially important on bigger boats like this. I’ve driven boats this size where in one direction the turning circle is small and the other way the circle is big, but not in this case. This one was perfect.
Out of the hole she was alive and fast, so for those adrenaline junkies who would like to launch this size boat through the surf, she will be able to do this easily. I had her running towards Simon’s Town with that big side swell at 25 knots, and she was so stable that I could leave the steering. Even then she was still travelling true, a clear indication that she was well balanced.
Then I decided to test her mettle in the washing machine round the Point — a real test. I pushed her through the heavy stuff at 15 knots and not once did I get water over the nose. Amazing! She’s a very stable boat indeed, with an extremely comfortable ride to boot.
The really big test came when we had a big following sea behind us. I kept her at 15 knots but was told to push her harder. What the hell, that’s the whole idea, and I had the new owner aboard with me, so just to show him what she was capable of I pushed her to 30 knots easily. Digging in and broaching were what worried me in a four metre following swell at this speed. However, not once — and I mean not even once — did she feel like she wanted to broach or let her nose dig in. There wasn’t even any water coming over the front.
I have to say that for this length and size boat, she performed incredibly with her 175hp four-strokes. Although I still think these twin 175hp motors had more than enough power to push her safely through the surf, personally I would go little bigger if I was planning to do regular surf launches. 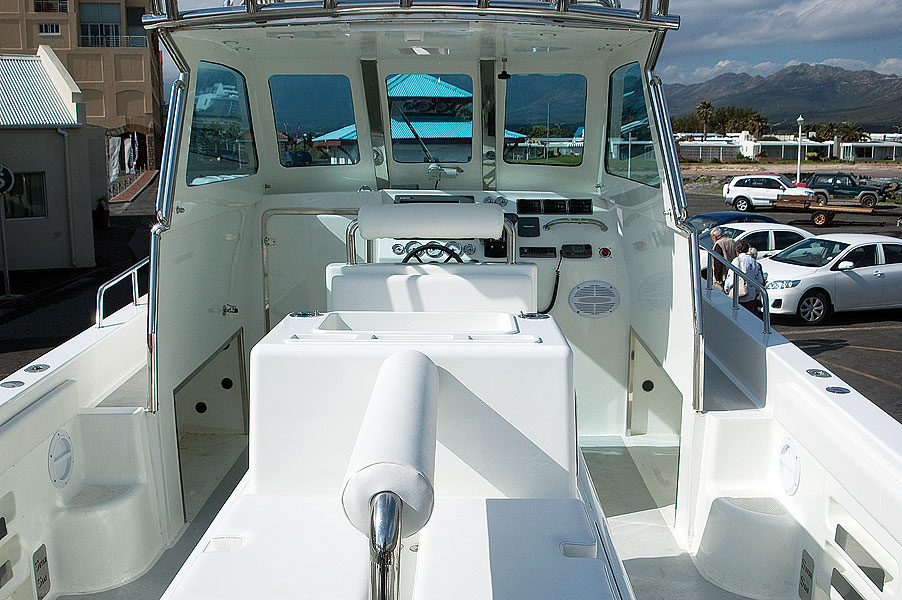 This boat was built mainly for targeting tuna in the Cape, so that’s what she was rigged for. However, she was also custom-built for Steve who generously allowed me to test her, so other anglers might prefer a slightly different layout.
The Butt Cat 865 has a centre console walkaround design. There’s the normal anchor hatch upfront as well as some stowage hatches, and ahead of the steering she has a huge hatch for storing equipment. All her electronic equipment was neatly flush-mounted on the console.
All around the wheelhouse she has tinted windows that give her a great look. To this add a windscreen wiper in the middle front window. Behind the steering they have mounted a bum box to sit on, which I prefer to a chair. Behind the bum box there’s a bait station and some big fish hatches behind that.
In the sides under the gunnels there’s space for storing your rods, with some more rod holders on top of the wheelhouse. In the centre at the stern you’ll find a very neat livebait well with a nice thick glass lid. Behind that, between the engines, there’s a railing and some steps to climb aboard.

Butt Cat has always been a respected name in the fishing industry, especially when it comes to commercial fishing boats. The people at Kamassi Craft have jumped a few steps ahead and have made so many improvements to the original style that the new boast hardly looks like the original Stan Butt design.
Kamassi Craft have taken Butt Cat to a new level, and with the number of different models they have available, they’ll be a force to reckon with in times to come.
This is definitely one of the better boats in the marketplace and I could not fault her in any way — her ride, stability, looks and layout. This is the type of boat that I would love to own one day when I’m big! Congratulations to Len, Tielman and the team at Kamassi Craft on what they have achieved. •