A MAJOR attraction at the Suzuki stand at the 2017 Johannesburg Boat Show was Hooker, a Butt Cat 930 XL by Nauti-Tech, which stood proud on her double axle trailer and sported twin Suzuki DF200A 4-stroke motors.
She drew a lot of attention, including mine, especially as Nauti-Tech’s Warren Rachman had asked me to review her when she returned to Port Elizabeth.
Suffice it to say that two weeks later I was in Port Elizabeth watching this magnificent rig being backed down the slipway at PEDSAC Club into PE Harbour. Out at sea calm conditions prevailed for the entire day which is pretty unusual for Port Elizabeth, but time and speed allowed me to obtain a good idea of this craft’s capabilities.
Nauti-Tech have had great success with their Butt Cat 865 boat in the South African market as well as in the Indian Ocean islands. Having spent a fair amount of time on one of those models during two marlin fishing trips off Struisbaai, I have had a good deal of experience with this craft in severe conditions.
I asked Warren why they decided to extend the 865 to create the Butt Cat 930 XL. In essence he replied that there was a demand for a bigger craft than the Butt Cat 865 and both Nauti-Tech and Butt Cat felt that by incorporating outmount extensions to the existing mould they could achieve the improvements they required without designing a totally new 9 metre craft.
The outmounts enabled the craft’s planing surface to be extended in such a way that the water reaching the craft’s propellers was much cleaner. Outmounting as a concept has been well received over the last 20 years and we all know it works.
However, this extension to the Butt Cat 865 is not just an add-on; it is incorporated into the mould to provide the benefits I will discuss in detail below. This incorporation ensures that the overall visual lines of the craft are enhanced. Primarily the wetted area at planing speed is moved aft. This allowed the twin Suzuki 200hp outboards that were swinging 16 x 20 stainless steel three-bladed props to utilise the thrust more efficiently. Ultimately this provides improved fuel consumption for long range excursions to the Cape fishing grounds.
In addition — and the primary reason for the modifications — you get a substantially increased deck space. I noticed this aspect straight away when I boarded her and compared the deck layout to that which I was accustomed to on the Butt Cat 865. 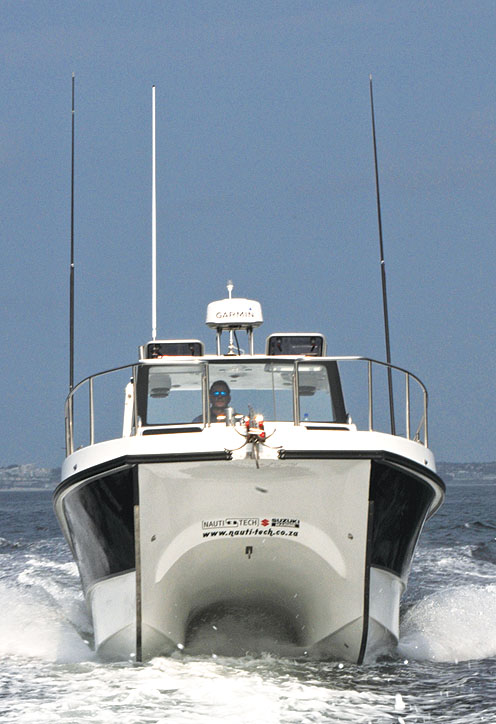 Hooker, as this Butt Cat 930 XL has been named, has been designed — deck wise — as a multi-functional offshore sportfishing craft. Her owner wanted a layout that would be efficient for marlin hunting off Sodwana Bay and for targeting tuna off Cape Point — two vastly different applications. The boat has been fine-tuned to suit both styles of fishing.
Technically, and approved by SAMSA, the overall hull length of this craft measures a fraction under nine metres, meaning she can be skippered by anyone holding a SAMSA Certificate of Competency for craft up to 9 metres.
I need to make special mention of the immensely strong double axle trailer that tows the Butt Cat 930 XL over long distances around South Africa behind a powerful Dodge RAM and IVECO 4X4 Eurostar truck. Not only does the trailer have very effective air brakes, it also has a separate hydraulic device to raise and lower the breakneck facility when loading and offloading this rig on the beach. A Warn winch is mounted on top of the trailer stem-post, thus giving a direct pull when re-trailering the rig. Talk about making life easy for Hooker’s crew!
Before boarding the craft I had Warren put her through her paces in front of the camera. That exercise results in the images I require to accompany the review, but also gives me the opportunity to watch the craft’s hull-over-water action and to refer to these pictures at a later stage to verify or nullify my impressions made when I personally skipper her during the trials.
In undertaking this review I seek to convey to readers my view of the craft’s performance on the water — aspects they can never fully grasp by only looking at pictures or videos taken of any craft at sea. An interested buyer can crawl all over a boat and listen to the salesman’s long stories about how she rides, but without physical sea trials no skipper can assess the merits of a craft. The help readers get from my assumptions often bridges the gap between merely being interested and the desire to pursue the interest and physically view the craft.
With this in mind, when I eventually got behind the controls of Hooker I immediately began appreciating her “feel” as I commenced a long run out deep off Cape Recife.
With the aid of the fly-by-wire controls, the vagaries of throttle control creeping are obviated and I could set an SOG of, say, 20 knots, and then concentrate on hull-over-water reactions at a fixed throttle setting, noting rpm against SOG while judging the ride of the craft.
Starting with the motors fully trimmed down, I got up to speed and set a course. Gradually I increased the trim-up in small increments until I reached a stage where the props started to aerate the water. I established that the 930 XL Butt Cat loves to ride in a very prone position with revs and speed optimised at 3 400 rpm at 20 knots at her “sweetspot” using just over one bar up on the trim gauge. Other settings of the trim gauges had a reducing effect on both rpm and SOG.
Another feature that came through very strongly is that this craft doesn’t need much or any lateral torque adjustment. Even after skippering her I found that difficult to believe and understand. Warren believes the planing areas of this hull design override motor torque and hold the craft stable laterally.
With this stability established I needed to see if this had any bearing on her behaviour when it was necessary to perform tight turns and get the craft out the hole like when you’re point break surf launching at Sodwana Bay for example. Working up from moderate out the hole take offs and turns to violent, fast turns I was pleasantly surprised at how well she was able to execute these manoeuvres. My scribbled down note at that time was “tight turns unbelievable”. 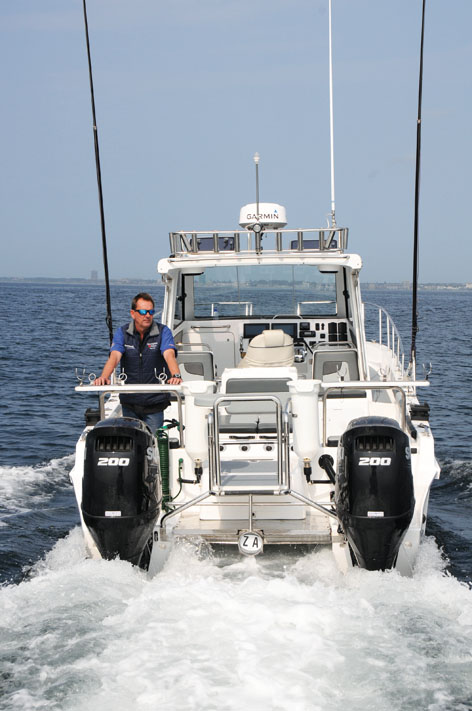 Using the Bell Buoy deep off Port Elizabeth’s beachfront as a fixed point of reference and using the small swell, I could hold this large craft’s position using the very efficient forward/reverse and, after gauging a break, floor the throttles and assess how fast she got out of the hole and onto a stabilised plane to crest the oncoming swell surge on her starboard beam.
Even during incredibly tight turns and out the hole exercises both to port and starboard — unlikely to be used in normal operations — I experienced no cavitation and limited heeling in the extreme turn itself.
During my time behind the 930’s wheel undertaking all the speed trials, I felt through my feet the area where the hull physically cut the water as it does virtually under the craft’s helm station. The words “soft ride” epitomise the boat’s ride and it’s something I’ve heard often over the years about Butt Cats in general.
Take a careful look at the accompanying photograph of this craft travelling at speed and note how low and aft she disperses water. Indeed, a picture speaks a thousand words and I need not wax lyrical about how dry the craft is.
I took turns trying each motor pushing the Butt Cat 930 XL with the other tilted up completely. Both planed the craft at approximately 23 knots with the motor’s rpm at 4 850 at full throttle; I could back that down to under 4 000 rpm and plane at a comfortable 17 knots. For the speed freaks, at 6 300 rpm running both motors she gets close to 40 knots.
With Hooker’s styling and deck layout geared towards marlin fishing, I spent a good deal of time judging her ride and wake build up at SOW speeds of between 5- and 9 knots, noting she did 6 knots at 1 400 rpm, 7 knots at 1 800 rpm and 8/9 knots at 2 000 rpm running both motors. At the latter the digitised fuel consumption gauge showed a reading of 1.7 litres per hour per motor. Hooker’s wake relating to pulling lures for billfish was tight and only started to spread at over 8 knots.
When it comes to the deck layout of the Butt Cat 930 XL I could easily compare it to the layout of the 865 model on which I have spent a lot of time while marlin fishing off Struisbaai.
On Hooker the extra 700mm deck space aft makes a huge difference. Add to this the aft boarding platform and it feels like you’re on a totally different craft. A step up onto this platform has been built into the false transom; it holds a bait/livewell and when that’s not in use it is designed and insulated to take 5kg cases of pilchards. Instead of this option Hooker has two luna tubes that suit her owner’s style of billfishing.
In the aft stowage area the above-deck hatch is positioned in the base mounting for the fighting chair; the chair itself is stored up forward until needed while hunting for marlin. The hatch provides a comfortable seating option aft.
The outrigger mounts are gunnel fitted and rigged, thus making access via the forward walkways very manageable even in rough seas.
I really liked the layout and centralisation of the helm station and found it extremely comfortable while skippering in that weather. I stood behind the wheel or sat on the large swivel seat with padded backrest during trolling exercises. Even though its overall design and layout is simplistic, the entire forward instrument and electronic set-up is extremely practical and user friendly.
Hooker’s wheelhouse/cabin/helm station is extremely well designed and beautifully finished to provide a sufficiently protected area for those long runs home in terrible weather which the Cape so often throws at us. A crew of five could find shelter on the boat under such conditions, but this cabin doesn’t impinge on the fishability of the aft deck area nor on access to the forward area if one is tuna fishing or anchoring.
Within Hooker’s forward cabin area there’s a large stowage area with an on-board toilet and access to all the electrical wiring and batteries required to operate the vessel.
In the time they have been undertaking the building of these craft, Nauti-Tech have made astonishing improvements in the crafts’ designs and the quality of both the basic manufacture as well as the finishes and hardware supplied and fitted is incredible. All the finishes — both seen and unseen — are fashioned for functionality.
In short the Butt Cat 930 XL is a superb craft that has been designed for sportfishing but can be customised to suit the prospective owner’s primary style of fishing and the area where the craft is intended to be used.