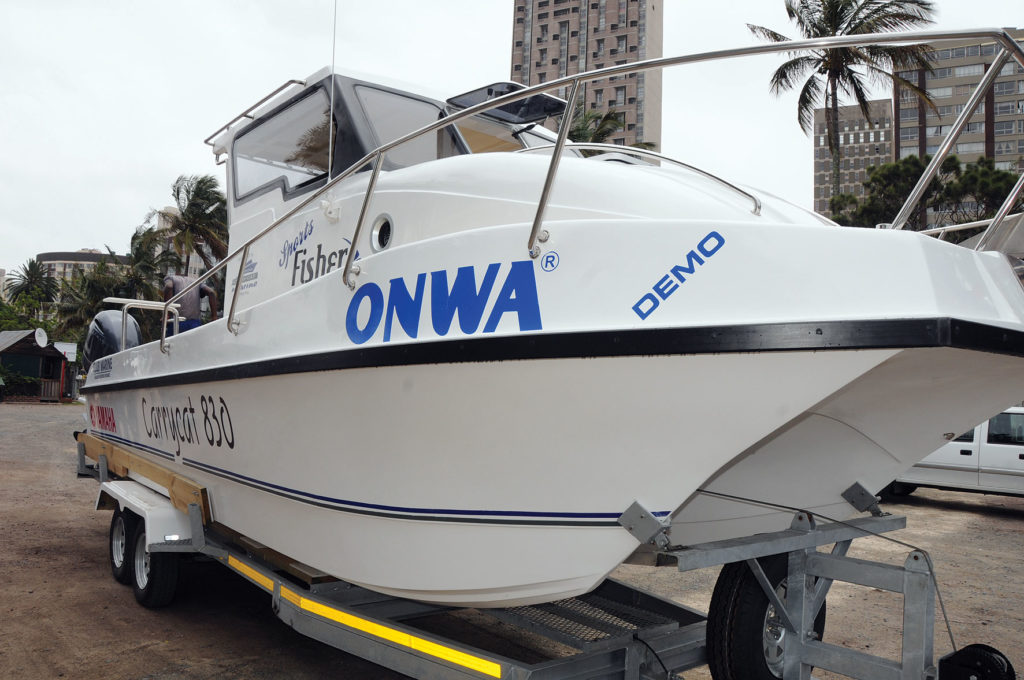 AN air of mystique around something always stirs up the interest levels, especially in the world of offshore boating.

When Carry Cat of Jeffreys Bay started building and marketing a new range of cats for the South African market and various models started to be seen at different slipways, predominantly in the Western Cape, comments and opinions started to filter down the grapevine.

My first introduction to the Carry Cat was through Silan Naicker of Onwa Marine based in Durban, who showed me a photograph of their range of craft and voiced his interest in marketing these boats in KwaZulu-Natal.

I was interested, but my curiosity was really piqued when he told me that an 830 Sportfisher model was coming off the design stage and moulds were being made.

“Now that’s the craft I want to ride,” were my words to Silan, and in view of that he kept me up to date with the craft’s progress on a weekly basis. I liked the original profile of the boat and the more of the production line progress I saw, the more excited I became to see the end product.

Time is always of the essence, and it was a serious race against time to get the first hugely anticipated Carry Cat 830 Sportfisher to Durban before my departure to Sodwana for the 2016 OET. Eventually the Carry Cat arrived in Durban on its very substantial road trailer a week before the final deadline of Friday 4th November 2016. In those four days the motors had to be fitted and the boat sufficiently finished off to make it seaworthy.

At 11.30am on the Friday the rig entered the parking area of Durban’s Natal Deep Sea Rod & Reel Club. She looked awesome, sporting her basic branding and latest generation Yamaha 150hp four-stroke motors. 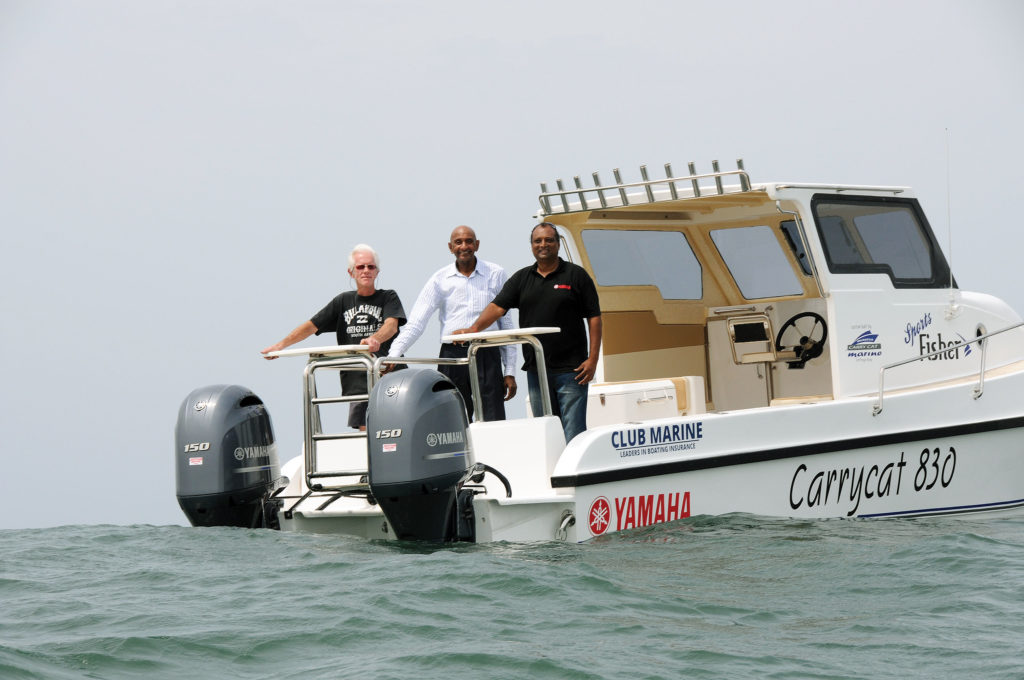 Silan and his business partner Nanda Naicker were highly excited, but were quick to point out to me that time constraints had prevented them from presenting the craft in a fully completed and finished state and what they really wanted was my opinion as to its water performance. Indeed, that was my main aim as well.

The majority of craft emanating from the Cape — south of Port Elizabeth — have a look and feel generated by decades of perfecting a boat that will take the choppy cross seas and wind driven swell for which that long stretch of coast is renowned. Looks are one thing, but I needed to take her out to sea to establish how the Carry Cat 830 would perform in the familiar conditions off Durban.

Fortunately the gale force north-easterly had abated overnight and the moderate south-westerly was filling the low trough thus formed.

When we finally exited the harbour mouth, apart from a big ground swell building up over Limestone Reef, the protected area off Durban’s beachfront was free of serious chop and ideal for getting to know this craft. There was plenty of the rough stuff out beyond the Bluff’s protection in which to see if she would handle some really rough water with big swells and full of white horses.

We had a great photo shoot that got me all geared up to reboard the Carry Cat 830 Sportfisher and physically feel for myself what I perceived to be the extremely beautiful ride she appeared to be providing. I made the crossing within the confines of Vetch’s and soon had this craft totally under my control, ready to put her through every conceivable manoeuvre to assess her pedigree.

My first trials were undertaken sheltering in the lee of Vetch’s where the spring low tide was forcing a cresting wave to wrap around this big structure. The craft was being affected by the west wind, and I held her in the protected water with a lot of slow reversing and positioning, getting her ready to jump the cresting wave and get on to the plane to make a quick port turn and run the tube to open water.

She responded well to the forward/reverse manouevres and I was soon able to position her for take-off. When I saw the break I floored the throttles and this big boat jumped onto the plane very quickly and was easy to control as she performed the required task.

With the big Vetch’s “rock” providing a fixed reference I could ascertain exactly how long it took me to get her hull out of the water onto the plane and get the speed and directional stability I was looking for. This ability is very important if the craft is to be used in surf conditions with a substantial point break. 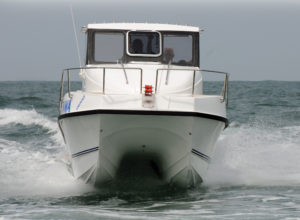 Then it was playtime. The big swell wrapping around the Durban South Pier and into the beachfront boils up over Limestone Reef that extends parallel to the beachfront. Steep and sometimes quite nasty, I played in them with the Carry Cat for a considerable time. Jumping over, running down the face, turning in front of them, I was generally assessing every facet of this craft’s performance under these simulated surf conditions. I was very impressed. I couldn’t get her to cavitate at all and was amazed at her tight turning circle. 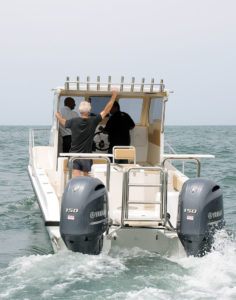 The twin 150hp Yamaha four-stroke motors that were swinging standard 17 pitch props were amazing, supplying effortless power immediately on command; they pushed this craft out the hole with surprising speed.

At a later stage I tested her ability to plane on one motor with the dead motor dragging and then tilted up. With one motor dragging she took a while to get on the plane until she was able to hold at just under 5 000 rpm. With the one motor tilted up she not only got onto the plane a lot quicker, but also planed easily into the wind and chop at 5 300 rpm.

Having satisfied myself with regard to the performance of the craft’s motors and hull, I set her on a long run testing her performance under various trim settings against rpm readings as I headed out to sea to bring her bow around from a transom sea and wind, through starboard influences into a direct head sea of a 15 knot south-westerly wind.

Maintaining a steady throttle setting, I was able to judge both the craft’s stability as well as how she attacked the head sea and how much spray she took during the periods of quartering the rough stuff. I was greatly surprised at her reactions to moderate motor trim. For a craft of this length, weight and forward structure, it was incredible how she responded to marginal trim setting changes, to quickly obtain lateral stability. With bow up/down trim I was able to cushion her ride when beating into the sea, making her ride very comfortable indeed.

In the rough stuff I put her through the full range of troll speeds and directional patterns, all the while trying to judge how the craft would react, what the crew’s comfort levels were and what the wake configuration was like. She did very well and I am sure the Carry Cat 830 Sportfisher that was used during the Billfish 15 000 Marlin Tournament ten days after my review would be an excellent fishing platform.

With the sea swell being relatively large and, as I said, a 15 knot south-westerly blowing, I ran her with the sea at good speed and marginal bow trim. She ran beautifully and, try as I might, in the moderate conditions I was experiencing I could not get her to drop a sponson.

Many folk talk strongly about the differences between the Cape seas and those we experience off the KwaZulu-Natal coast and how certain boat designs are more suited to specific areas. That’s undoubtedly true, but from my experiences in all regions off South Africa’s coastline I venture to say that, with adaptable boat handling skills and motor trim positioning, the vast majority of the so-called local limitations can be overcome.

The Carry Cat 830 Sportfisher’s stylish design includes a good sized helm station and large forward cabin/toilet area that can be redesigned to cater for the owner’s demands whether he’s a dedicated marlin fisherman/tuna hunter who operates off Cape Point or a lighter tackle enthusiast that enjoys greater recreational comforts.

As Silan said, the craft I tested is basically a prototype for on water trials so they can fine tune what should be incorporated in the general layout design and what specific requirements need to be reviewed.

I like the semi-enclosed helm station with adequate seating and plenty of under-seat stowage. There’s loads of free helm space for the skipper and one other crew member upfront to keep him company.

The fishing cockpit area is large, and on the review craft the bait/work station was designed with the option of being able to fit numerous tackle drawers which I found practical for billfishing. I also liked the wide walkway up forward which would provide access to outrigger set-ups or, if there were no riggers, access to the bow area. 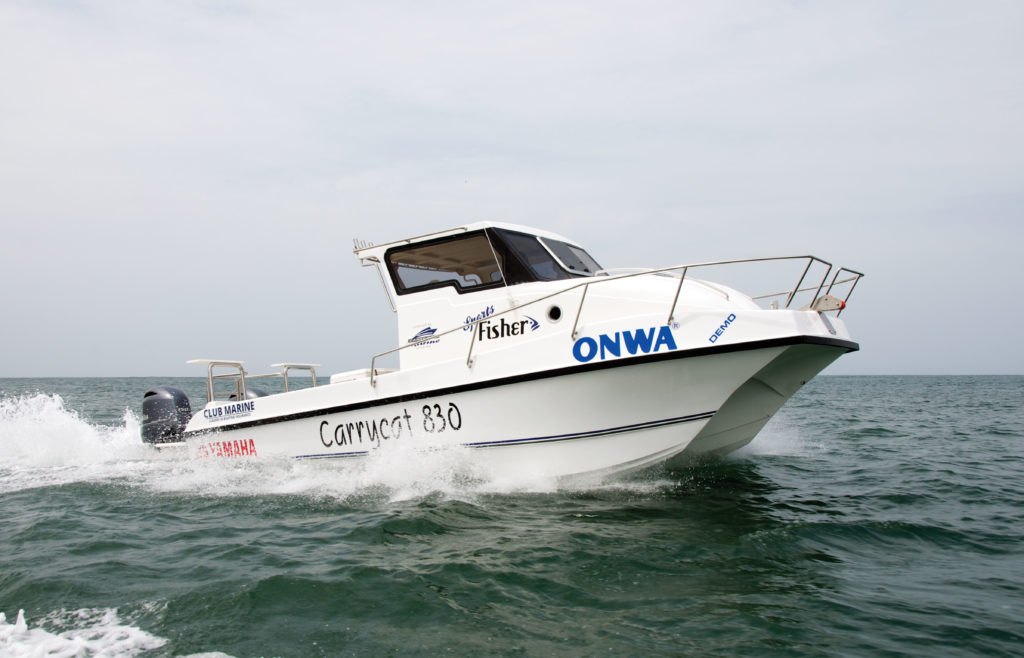 The aft layout utilises the outmounts incorporated into the sponsons which provides for a large aft central platform that can be used very comfortably and safely for the light tackle angler to manoeuvre a hooked fish around the transom. In the centre of the aft transom area is the livebait well that can be plumbed if required.

This craft was initially being aimed at the marlin anglers so it did not have fish hatches, but the hulls are designed to incorporate a fish hatch in each sponson.

As I mentioned, this boat was being tested as a prototype, so it would be unfair to remark on internal hardware and finishes, but I had a close look at the finish of the hull itself and admired the moulding and its rigidity.

I am very impressed with the overall ride and handling of the Carry Cat 830 Sportfisher and this hull with its stylish top deck will form a great base which each owner can then choose to finish to his requirements.